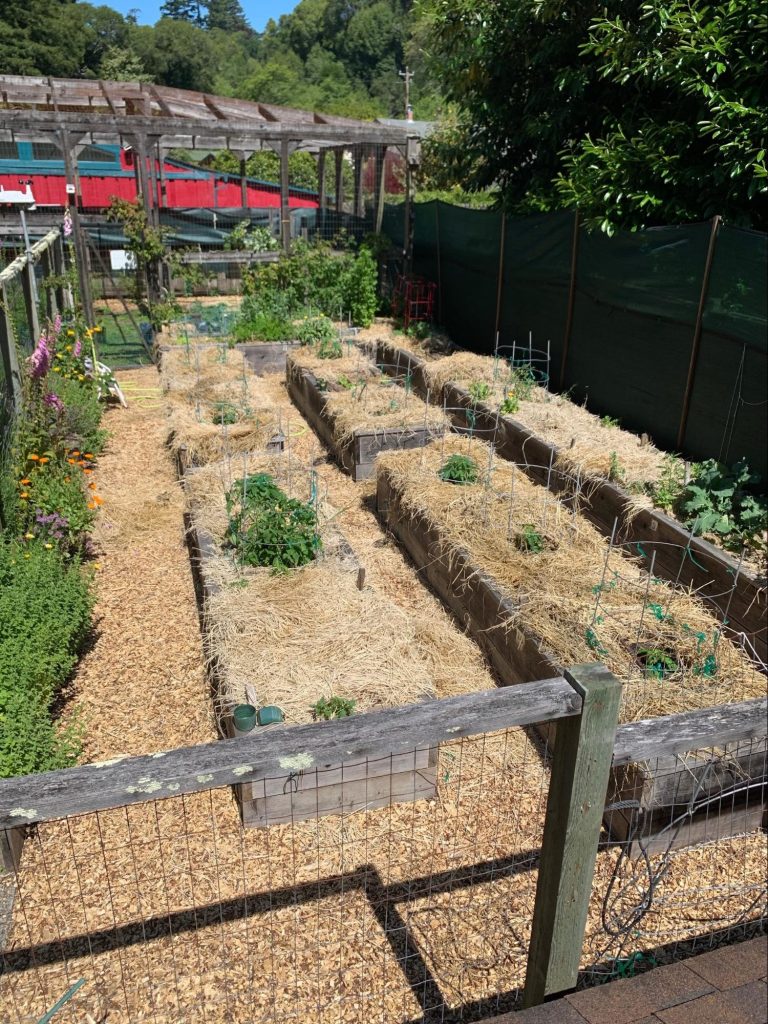 Two months ago today, I put plants in the beds. When you’re out there every day, you definitely notice the growth. There are little benchmarks you follow. How quickly do the tops grow from one rung on the cage to the next? How much do they grow in 24 hours? Which plants are speeding up and which are slowing down? If they are slowing down, you better start checking her tops to see if they are starting to gather and tighten in a pre-flower position. Recently, I was able to look at Shiatsu Kush about a week prior to her flowering start and know that she was nearly ready.

Every year I’ve grown, by the two month point in the beds, I’ve always had at least one flowering plant. During the next month, I expect most, if not all of the others to begin flowering as well. I might already be seeing the slowing down of both Bubba God and CBD God. Sour Tsunami’s tops have tightened. If I’m not mistaken, I thought I detected the sparkly glint of a single trichome on a sugar leaf close to a CBD God top. When you start seeing trichomes form, the plant is beginning to transition into flowering.

Two months in the ground isn’t even halfway to the completion of harvest. Two months from now, we’ll have one plant dried and in jars while everything else will be at varying stages of flowering. My hope is that two months from now, the majority of what remains will be getting close to harvest. Based on previous years, that hope is realistic. At the moment, it looks like several plants could go many more weeks in veg mode, but with the daily increase in shadows, that will change. August is the last full month of summer. By the end of next month, we’ll have a number of plants with tops well over our standing heads. August is also the month where all that training can lead to plants leaning into the walkways of the aisles. There are already wildly growing plants; especially the ruderalis, so I am reluctant to walk around when I have the foliar sprayer. The neck is long and it has caught on branches and broken them before I knew to react. At a certain point last year, I took full advantage of that long neck and stopped walking down the center aisle at all. I also used a cart to help pull the foliar sprayer underneath the canopy. This was after ripping off a full branch of flowers from Sour Tsunami. I just reached as best I could over the canopy. Sometimes, I used a step stool to get slightly above and do a more accurate spray. This became impossible as I developed a hernia and my stride was extremely compromised. But I kept spraying anyway. Honestly, last year became ridiculous. 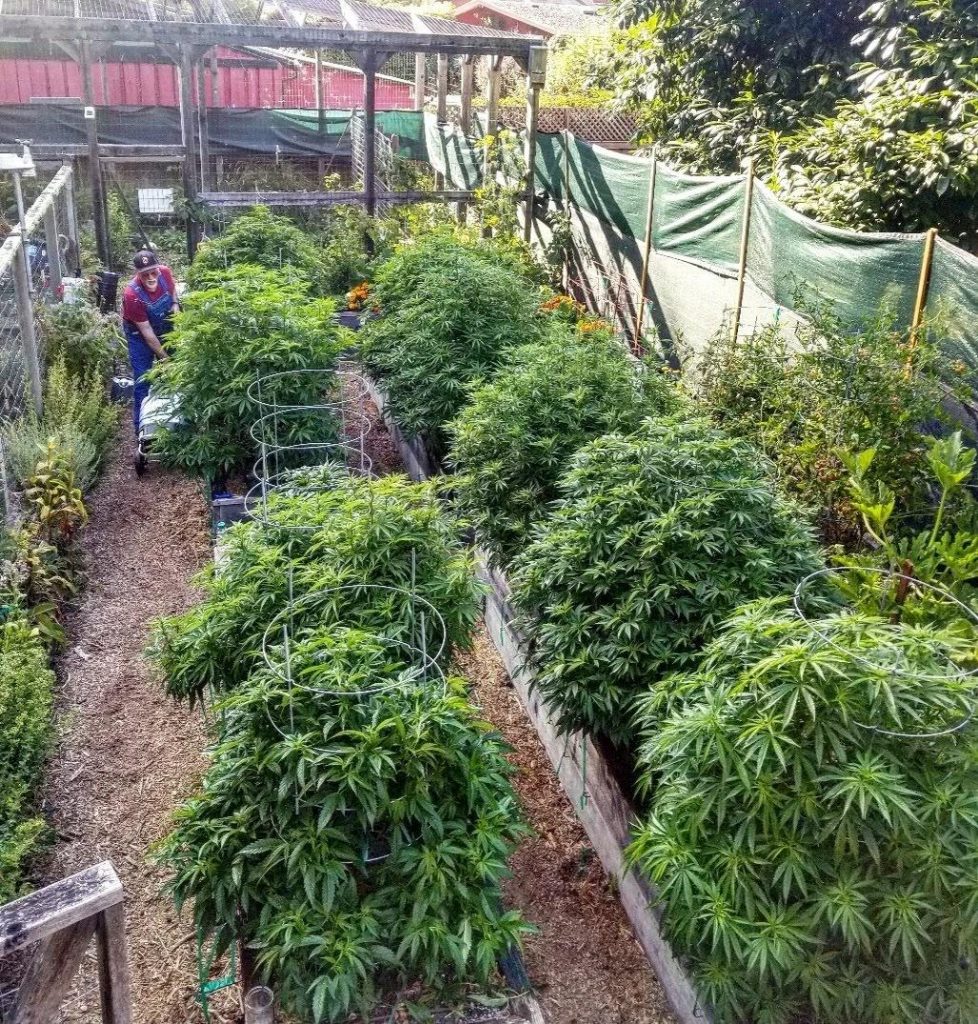 August 7, 2019, pulling the foliar sprayer on a cart, under the plants, to prevent further damage.

The amount of activity outside is peaking toward the end of July. We are approaching mid-summer, and soon after, we’ll begin getting the first hints and whiffs of Autumn. Insect life is full throttle at the moment. Any water left standing in a bucket, or certainly the 70 gallon tub we have for ducks, becomes a breeding ground for mosquitoes after about 48 hours. Btw, I’m no longer impacted by mosquitoes. I’ve grown immune to the few locals who avoid dragon flies by day and bats by night to sample my O negative blood. This does not suck. Also, for anyone else out there with O negative blood, please consider donating at blood drives, because you are a universal donor. People need your blood.

We are also being told to ration our water. We had an unusually light winter of rain for our area, only about 24 inches, which is 60% of our normal goal. So we flush a lot less, shower less, etc., yet I can’t help but notice the lack of rain has not hampered our ground water in any way. Because of the spring, we have run exactly as much water as we’ve needed, whenever we’ve needed, from our own supply. We have been frugal in not running extra water as in previous summers, like extra swimming ponds for the ducks, but we have not cut back on the amount we normally water in any way. As I write this, our 1,500 gallon tank is lightly spilling out of the overflow pipe and down the hill. We are not short of water here.

As an aside to all of you making your plans to grow, I offer you a couple of thoughts. We passed our 22nd anniversary at this house and property a couple of days ago. 22 years is how much time I’ve had to figure stuff out and do the work. I didn’t move here until I was 41 years old. I never lived anywhere remotely like this prior to moving here. So the lesson is, good things take time and planning. Patience is rewarded. But when you do finally get the chance, follow your heart and go for it full speed ahead.

Locate a region with water. Native soil is a definite plus as well, but you can create good soil, or have good soil trucked in. You cannot create the abundance of water that is needed. You either have it, or you don’t. If the local tap water is perfect, that’s wonderful, but if it isn’t, don’t settle until you’ve got water on your land. If you are thinking of growing for a living, spend the time you need to locate the places that have what you want: Water, Land, and enough Sun.

I hope you are noticing how tight my window is for growing. Honestly, as blessed as this land is, if I had known I’d be growing cannabis, I’d have looked for something that is not up against a south facing hill. I’m making it work here, and it’s all good, but I’m just saying . . .

You folks have the opportunity to find the right place for what you want to do. In this blog, I’m trying to share the things I’ve learned so that you might make your growing situation the best it can possibly be. I see the advantages and disadvantages to where I am and what I do. By sharing it all; especially since I never intended to grow cannabis, I hope this blog helps you make better choices. Your choices might not be the ones I would make, but that’s ok. I’m not you, and I’m not where you are. Growing cannabis is hard work. I respect every single person who grows their own. My enjoyment of this plant has been enhanced by growing it.

Was able to do a full 3-gallon Regalia spray this morning at 8:40. Sun did not come out till 10:00. I see a BT spray will happen sometime within the next seven days. A new month means a proactive spray against worms. The moths are flitting in and out like dancers. They are aware of humans, but not at all bothered to lay an egg within reach while we prune. They are clearly of the belief that they have the right of way, and from a reproductive point of view, they are correct. They lay approximately 50 eggs before they die. The white cabbage moths that prefer our beds are completely utilitarian.

One of the things I want to document here is flower development. I got this request from Ace Kisch at Oaksterdam the other day:

“It would be great to see photos of the flowering process. The various stages of bud growth are rarely documented.”

I agree, and that’s a great idea. So we’re going to do what we can to document the flowering of each plant, start to finish. As we’ve only one plant begun so far, here is Shiatsu Kush, day 11. 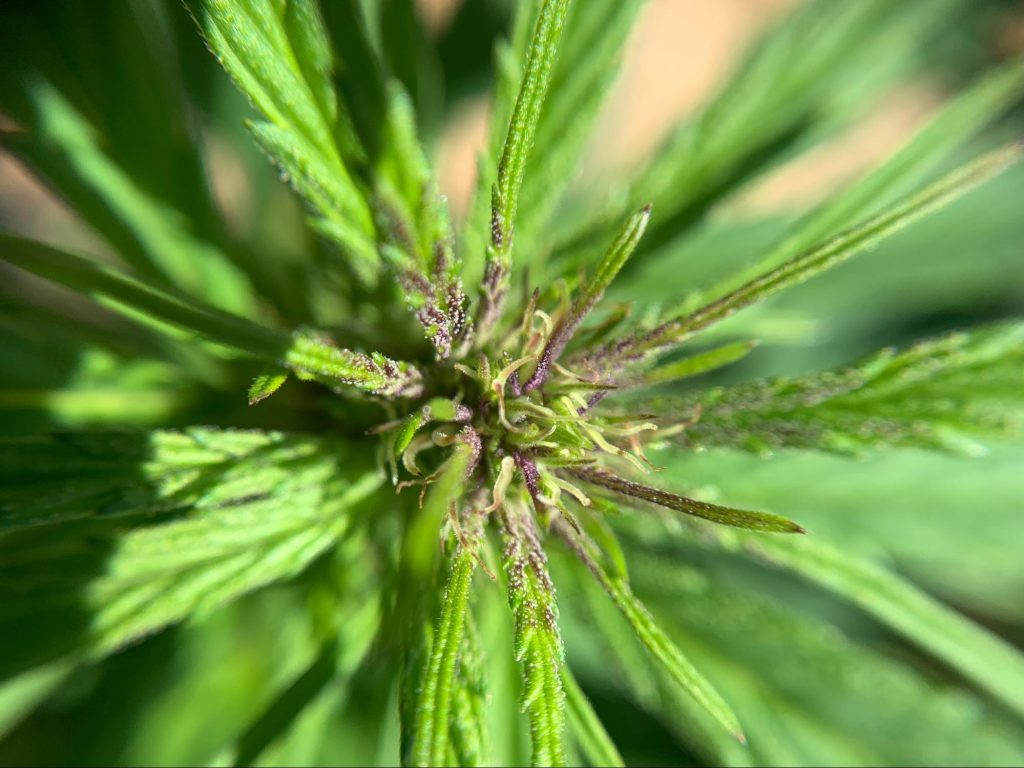 Last week, I included a photo of RK 18 expanding toward the flowering SK. Look at that photo, and then at this photo from today. Note how much the RK has advanced in only five days. Pruning will begin soon to help limit plant interaction. RK 18 cannot wait to be trained into bed 19. RK 18 is rapidly becoming a monster. 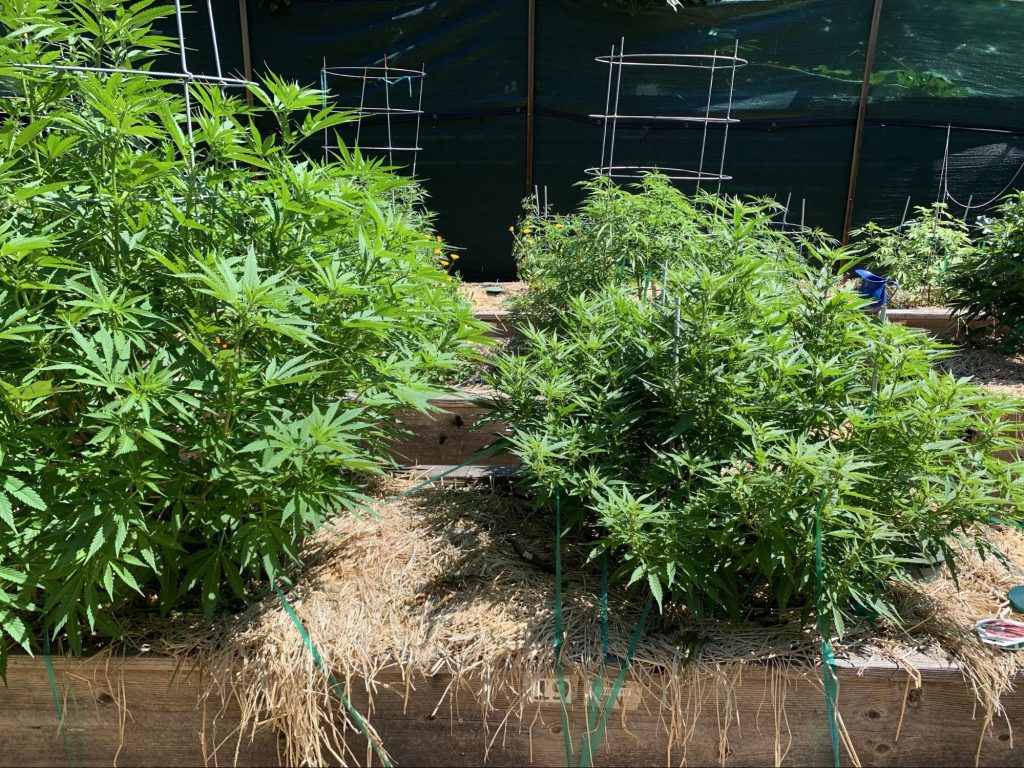 We are starting to see quail families combining forces into large roving flocks in the valley. This happens every year. One of these flocks has been hanging out here for the last few days. Probably 6-10 adults, and close to 20 teenage quail. I would love to get a video of them doing a dirt bath. It is the youngsters I must try to discourage from helping themselves to my green, still ripening stupice tomatoes. There are no beak marks yet on developing fruit, but if they continue hanging out in the beds, it’s only a matter of time. As much as I discourage them, it doesn’t really bother me too much. I don’t mind sharing with the quail.

During breakfast this morning, we realized we’re on day 143 of our isolation during this pandemic. We’ve been doing this long enough to where it has become normal for us, which is a shame. The only difference for me is that I’ve been given license to write this year, while everything plays out. I would like to take a moment and express a few thoughts toward those running our country.

My wife and I are appalled at the lack of any cohesive response to this pandemic, even after so many months since it began. We are discouraged that our government is unwilling and incapable of admitting how badly they’ve blown it, or show any concerted interest in actually making it better. Lots of lip service, promises, lots of blame, and an overwhelming number of lies. We are shocked at the lack of urgency toward solutions. We are discouraged to watch our overwrought country attempt a fool hardy return to normal. We are sickened to watch our federal government “take no responsibility at all,” for their abject and well documented failures and lies. We are embarrassed by the people pretending to be in charge. We accept that we are a long way from anything resembling normal. We understand that what we once perceived as “normal” is in a roiling state of flux, with no apparent end in sight. Except, perhaps, from what we do in November.

PS  Looking forward to being one of the zoom judges on Wednesday for the capstone project of the Oaksterdam Cannabis Business Program. Get your pitches ready, students!

PPS  BREAKING NEWS:  We have our second flowering plant. Most of the plant has not begun yet, so I know this is very new. As suspected many blogs ago, here is Sour Tsunami, at two days: