This morning was the first 4.5 gallon spray. That’s full capacity for my foliar sprayer. From here until we start cutting down plants, every foliar spray will be a full tank plus however much more I’ll need to finish. Last year, the top amount was seven gallons total. I expect the same, or close to it this year.

When this happens, I make a little mark on the calendar to remember the day. Last year, the first full tank foliar spray was July 26. This year, it’s July 29.

As a grower, this date has significance. I know that from this date to the final harvest, we have plants that need to be inspected every single day. By that, I don’t mean a casual look over, though there are plenty of those as well. I mean spreading branches apart and looking closely. I do this at various points of each day, but especially in the evening, as shade provides the particular kind of diffuse lighting that makes pathogens and other problems much easier to spot. Foggy days are good for this, as well.

A box of gloves is now in the beds, alongside the honey, beer, tweezers, and very soon, a box with mag lenses. We are transitioning to flowering mode. 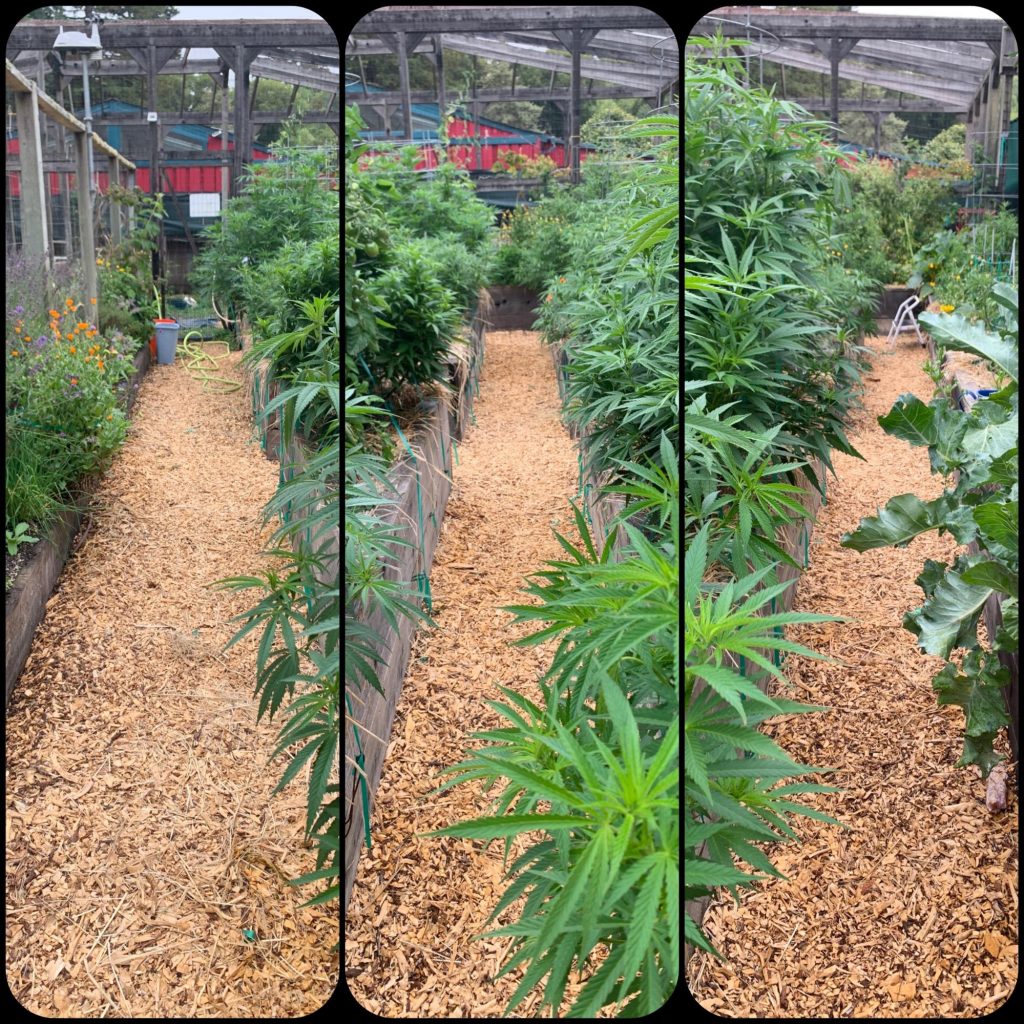 Here you can see the three aisles, and how plants are beginning to hang into the walkways.

This means Brenden and I will attempt to up our mindfulness every time we enter the beds. The plants are now at a stage and size where accidents happen much more easily. This means moving more slowly and carefully when in the aisles. This means touching developing flowers only with gloved hands, learning to use the large, dying fan leaves to move stalks for access. Try not to touch the flowers. But you must move things around enough so that you can fully see the flowers. You must be able to inspect all sides of every flower for debris from local trees and bushes, as well as dead or dying insects who get stuck. For this extremely delicate and dextrous work, we have long handled tweezers, up to a foot long. This is the season we use these tweezers and they are one of our most indispensable tools.

We are about to do some major inner pruning on RK 18, because she’s growing like mad, and we need to give some order to her chaos. It’s time to take off the inner stuff that will not produce like the outer stuff. This will only increase the size and potency of her eventual yield. As you can see in this photo, she is consuming everything around her, including me.

As plants flower, our pruning will increase over the first month. By the second month, we ideally would like to simply let them grow, without much further interference from us. The plants are not getting any water by the second month. I also stop compost teas a couple of weeks prior to their scheduled harvest date. I want every flower drawing whatever they need from the plant. I want leaves dying, being drained of every drop before being jettisoned or cut to the ground.

So obviously, some of what gets pruned that first month of flowering are some pretty juicy developing flowers. They are simply not in the right spot to grow well, or they are in a spot that inhibits a larger flower that’s growing and they have to go. Where do those cut, undeveloped flowers go?

One of our favorite summer treats are cannabis fruit smoothies. Mind you, we’re not looking to get baked, though if the plant gets decarboxylated . . . Stuff happens, right? I am a sucker for fruit smoothies with flowering cannabis added. Since we’re in quarantine anyway, and I’m not going anywhere . . . bring on that smoothie.

After finding the Sour Tsunami flowering just before sending in the last blog, I am now inspecting every top on every plant, every single day. The two most likely to turn next are CBD God and Bubba God. Without question, trichomes are beginning to form on CBD God, so she’s starting, though I cannot declare her as flowering just yet.

I do not expect either RK, or the White Widow, or any of the ruderalis to turn for at least a couple more weeks. The ACDC might take longer.

I would now like to spend a few words gushing over ACDC 22. I wrote a couple of weeks ago that this plant could not grow as tall as some of the others, due to the early flowering attempt. I may have to take that statement back. Her tops just passed rung 5 on the Texas tomato cage. Three weeks ago, it wasn’t even at rung 2. I wrote Brenden this morning that I expect ACDC 22 to eventually reach eye level with us, in addition to being trained several feet out in every direction. I’ve seen other plants grow fast, comically fast. RK 18 is growing that fast right now. But I don’t think I’ve seen any cannabis plant of mine grow this fast, with such a vengeance. It’s almost as if this plant knows how much we need at least one of the ACDC we started this year, to produce a large amount of medicine. The others are all going to produce fine amounts. But I wanted one ACDC that just went off. I have my wish, though I never could have anticipated this response, from a plant that tried to flower so hard her first week in a bed. This is ACDC 22 on June 23, and today, July 30. 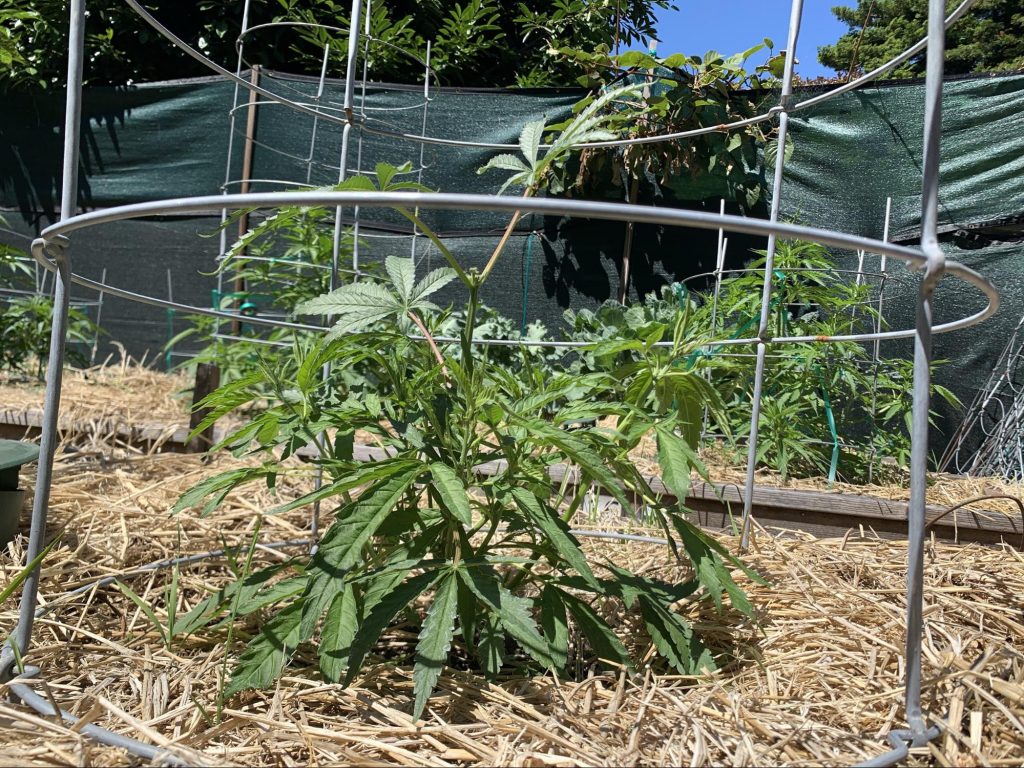 And while the results are not yet as spectacular as ACDC 22, I would also like to draw attention to the other brutalized plant, ACDC 7. She’s not going to bring the yield of 22, but she is going to produce more medicine than we thought possible after her early flowering attempts. 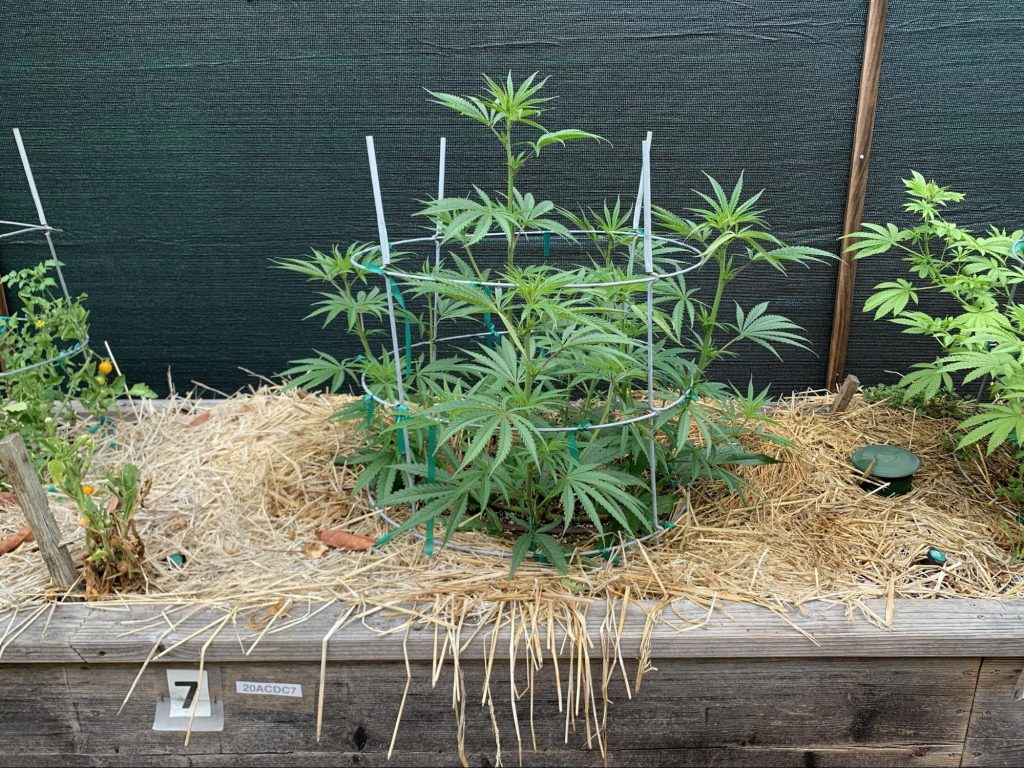 Like 22, ACDC 7 is now in full, sprinting veg mode. The top branch emerged from the bottom of the plant, after cutting off and sealing her attempts at flowering. She is small, but with another month of veg growth in store, she looks like a solid medical plant now.

In the case of each plant, they have been given the precise recipe for rescue from early flowering, and it worked. But, after the plant figures out how to grow vegetatively again, it is our job to give her a path. This is where very basic, though extensive training, can provide the framework for the plant to successfully produce great medicine. In the case of each of these plants, the center stalk has been compromised and rendered obsolete. In both cases, the center stalk has been mostly removed, and sealed with honey. A new center stalk needed to emerge from the base, and plant tape is extensively used to separate the new growth. In the case of ACDC 22, we’ve never seen an early flower plant respond with such an extensive canopy. I believe I stated this plant would become effectively wide. But those center stalks are still going straight up and with them, the stalk of the plant is rising as well. Right now, she’s growing a foot up every six days. That’s two inches a day in every direction. I don’t expect her to start flowering for another month. She’s going to be very large and bring a respectful yield.

ACDC 7 is not going to be as prolific, but she is developing fast. Again, look at the training. Her main branches are spread out to the sides, allowing any inner growth to develop without restriction. This also allows for growth from each stalk to be unimpeded.

We have abruptly moved into a couple of weeks with 50/50 teas. One is made for flowering or near flowering plants, and the other is made for all the plants still in veg mode. It is a simple enough adjustment, and it keeps the momentum going for everything growing. I am not adding anything extra to the teas in terms of fertilizer this week, or probably next. So the flowering plants will get a lot of flowers and fruit in the green bag, and the other tea will still be focused on maximizing veg growth. When I look around the property right now, flowering plants are easy to find and veg growth is becoming more scarce. Luckily, I have the buckeye tree and those 400 year old sprouts, and the constantly sprouting kiwi plant, so I’m good. In terms of flowering, it’s a take your pick situation. Most things growing are flowering. lavender, feverfew, bottle brush, lemon verbena, oregano, calendula, even borage. There will be another haul of plums and this week, we’ll introduce crab apples.

I must admit (if you haven’t already noticed), I really enjoy making tea. I start with a plan every week, but I allow myself to also be inspired by the moment. I love when I’m inspired. I feel the same way when I’m writing. Every sense is engaged with the process. If you slow yourself down while you are in process, you are more capable of noticing new information, a new plant, a fresh source. When I’m making 50/50 teas, I am engaged in both the process of veg growth and flowering plants.

Where do you find new veg growth, when most everything else is flowering? Any ideas? The answer is to encourage new veg growth from existing plants during the season. 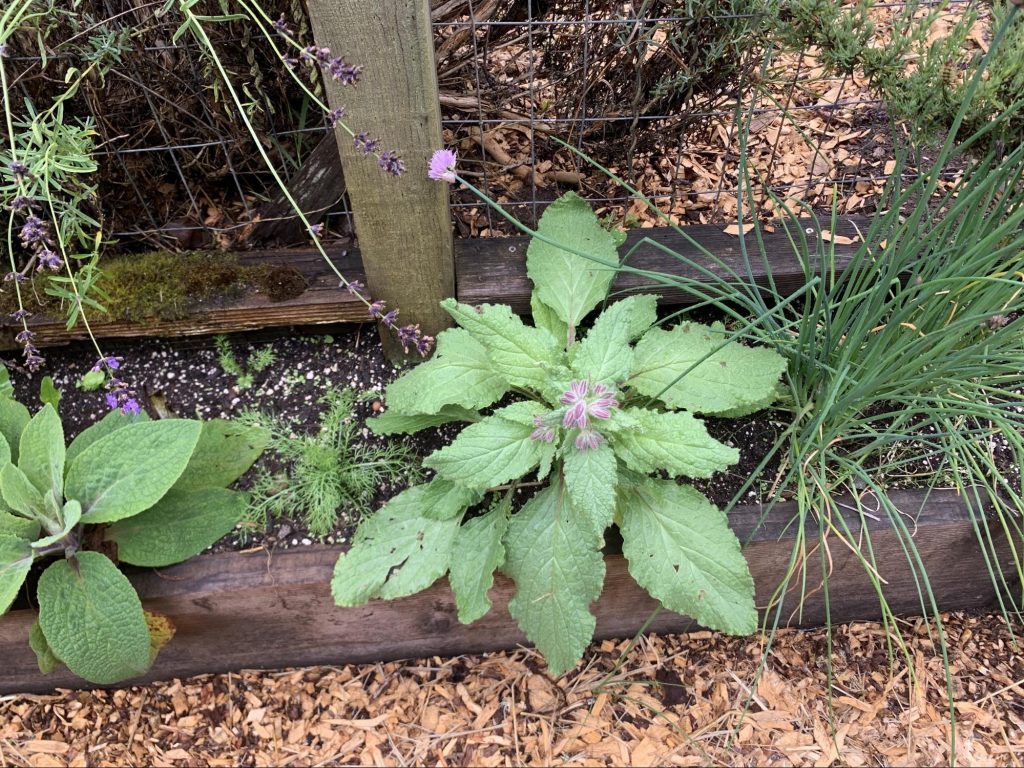 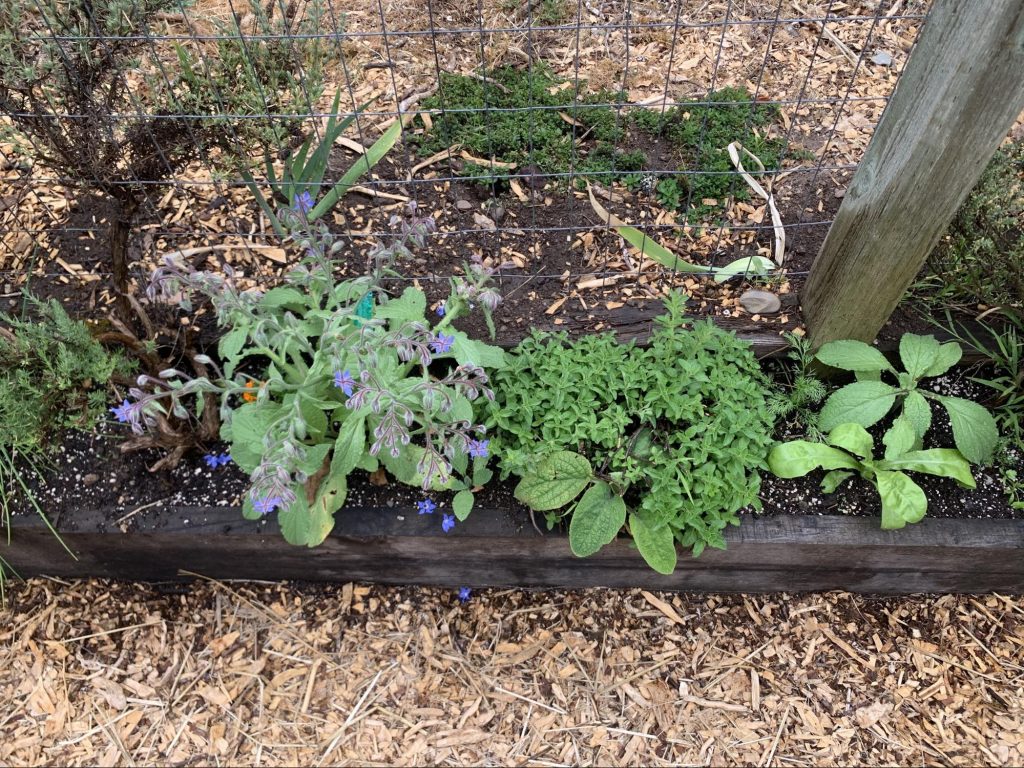 What we do is create new opportunities for veg growth. I mentioned weeks ago how Karen harvested a bunch of lavender. That early harvest promotes another round of veg growth. Suddenly, we’ve got a new batch of green lavender coming in. The same can be said for most of the plants in our spice rack. Right now, we have both flowering oregano and brand new oregano. By harvesting, by pulling, by cutting, we encourage new veg growth. There’s always the buckeye tree suckers, of course, and that is part of the permaculture. We are also actively creating new sources of veg growth for later season teas. In these photos, you see borage, oregano, the beginning of German chamomile, and calendula. All of these plants can be used for teas in either stage, veg or flowering.

There are also other plants just coming in, just sprouting right now, that are part of the permaculture out here. Once again, I bring up the plant, borage. We planted borage once, and have not planted another since. We have transplanted some starts to areas most beneficial to our beds, and I also pluck some of them for teas. There is an abundance, and they are growing in both vegtative and flowering modes. One of each goes into teas. Because we have raspberries, we also have new raspberry sprouts  coming up constantly in places other than the beds. Whenever I need young veg growth, I look for suckers growing from other fruiting plants.

As previously mentioned, I have stopped all forms of fertilizer for this tea. They got a heavy dose last week, and I’ll give at least one more week before I consider using the Bloom formula again. As new plants turn to flowering, I’ll re-introduce the Bloom formula. It’s going to be a long growing season, with plenty of time to add all the potassium and phosphorus they need.

See you next Tuesday. Things are ramping up. I wish you could smell the young flowers.