2020 Isolation Grow: A Pause in the Wind 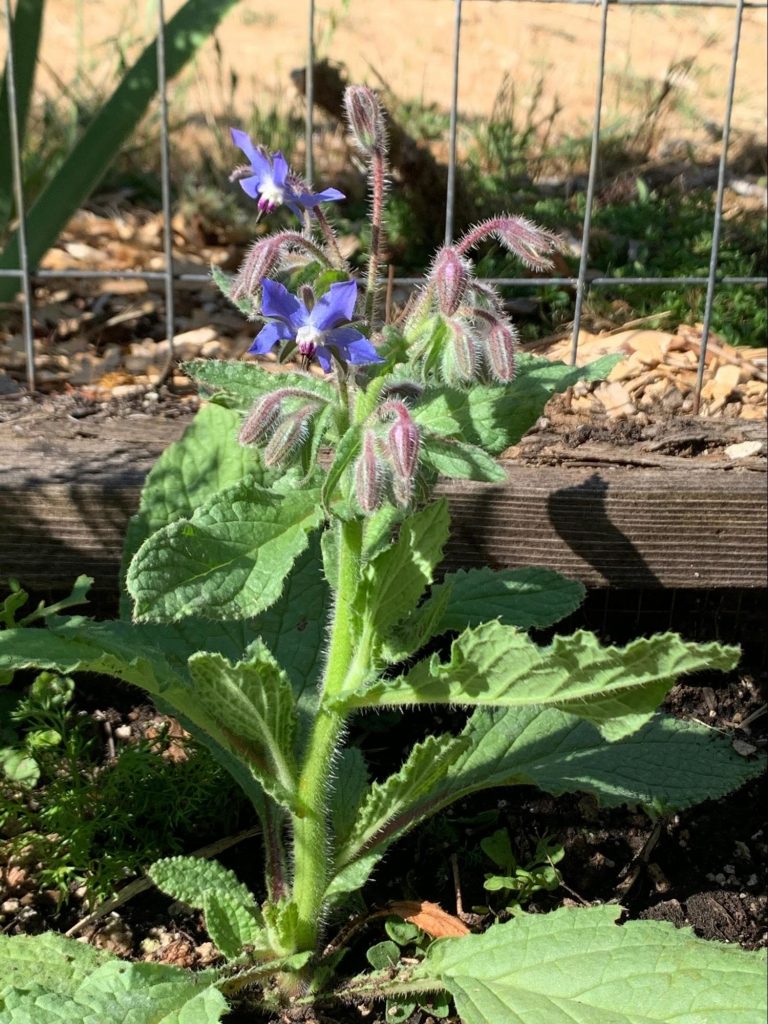 We have the return of borage all over the beds and aviary. This one is a youngster in the spice rack next to the lavender.This is why we’re seeing more beneficial insects.

Here is an insect with an interesting story: The Green Sweat Bee, investigating a calendula flower. I’ve read that these bees are attracted to human sweat, but I have never had one slurping from me, and I’ve had rivulets and streams of water running from my scalp while I garden. Such a pretty bee. This one shines green in the sun, while others reflect blue. 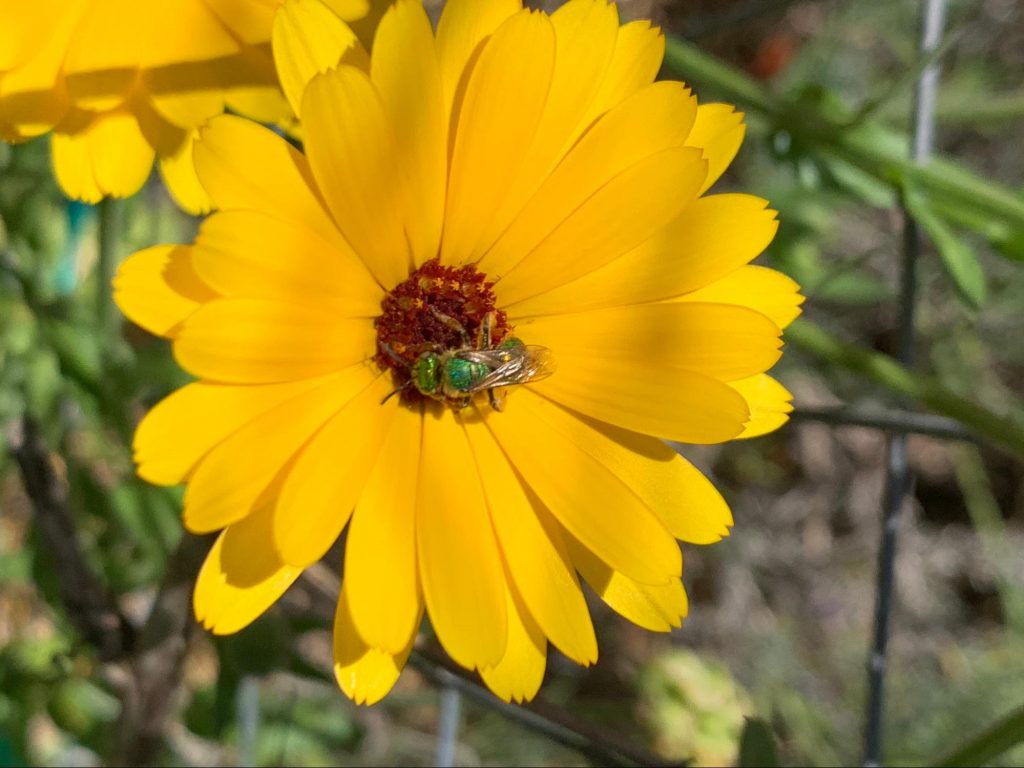 The last few days have brought almost round the clock wind to the valley and beds. We sit in a protected valley, a sort of banana belt along the north coast. We are protected from the worst of the winds, which whip around the ridges, and batter all the rocky points closer to the shore. On the valley floor, we’ll still get 20-30 mph gusts, and consistently 10-20, but the ridges and points can see 40-60 or more, on a fairly regular basis. Even on the valley floor, beyond whatever wind you can feel, you can hear much more. I’ve mentioned that we live in a quiet place. This is an area where you can hear the storm coming before it arrives. You can both see and hear rain beginning up on the ridges and moving across the valley. It is the same way with wind.

A couple of mornings ago, I had a special experience in the pre-dawn. I am often witness to the animal transition from night to morning. I’ve listened as nocturnal sounds fade or abruptly stop as dawn (or a predator) approaches, and I’ve watched raccoons trudge off towards where they sleep, just about when the first birds wake and yawn. One of these mornings, when I’m on my way for a pre-dawn foliar spray, I suspect I’ll wave a goodnight to the fox as they head for their new den.

So I was doing a foliar spray in the wind, which is not my favorite weather for this activity. I tend to get a lot of spray in the face, but not as much as I used to, because I’m not out there spraying for over two hours, with the one gallon manual pump sprayer.

There I was, spraying as fast and efficiently as possible, while being whipped around by relentless wind. Nothing out of the ordinary.

Until the wind stopped. And by stopped, I mean it went from a steady roar to nothing. Wait, that’s not entirely accurate. It went from loud in every direction, to absolute quiet, to a few birds tentatively chirping their good mornings to the world. It was a surprising moment of pause and uncertainty. It became so quiet, I had to stop what I was doing out of respect.

The pause, and the deep silence lasted about 45 seconds. From along the ridgeline that borders our valley, due west about a mile away, I eventually heard the first rustle of branches as wind curled over the ridge and resumed cascading and skipping over and across treelines along the valley floor. I could hear it coming, long before it got to me; especially when I closed my eyes. After it hit, I resumed my spray, and morning sounds were once again overwhelmed by the dawn wind. Wish I had audio of the event.

Also wish I had video footage from later this morning. When I went out to pour compost tea for the vegetables only, a local quail family was sleeping under the cannabis. This family has been whittled down from nine chicks to three, and it’s no wonder they took refuge in our beds, which provide cover, and have a fence to protect from land based predators. The quail sleep under the cannabis canopy. I’m generally fine with this, but I know from experience they will eventually sample whatever green tomatoes I’ve got growing that are within reach. Quail love unripe tomatoes. I also know they better not make a peep all night during the summer. Some nights, that’s all an owl needs to identify an exact location. I wonder if the quails know the tomato cage provides a significant barrier from airborne attack.

There’s really not much to add to the plum photo below. I’m getting my share, squirrels are getting theirs, deer are shaking the trees and helping themselves to fallen fruit. Honestly, this year is pretty chill for everything in the woods. Of course, the plums haven’t started fermenting yet. I’ll check back in a week or two. In the meantime, it’s fresh sugar for all compost teas next week. As beautiful as these look, they are only mildly sweet. There are too many for the sweetness to be concentrated enough. So these are not especially yummy plums for humans. But they are great for all the wildlife, and the simple sugars are perfect for compost teas. I’m going to wait another week before using them in teas. I’d rather not introduce fully developed fruit to teas until we are closer to the start of flowering time. My starting point for fruit has always been the middle of July, because right about August 1 is when many of these plants will begin the transition to flowering. 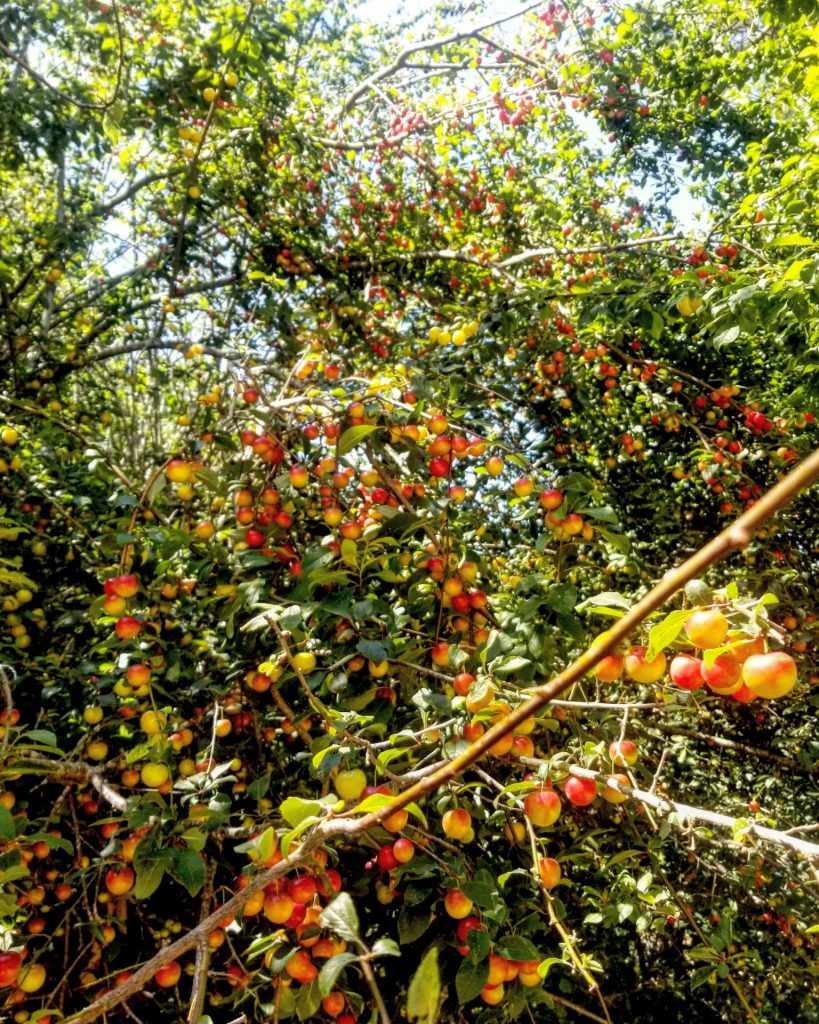 As the insect population increases over the long summer, including both beneficial and non-beneficial insects, there is bound to be an increase in this: Spiders are getting fat from flies and all manner of passers by. 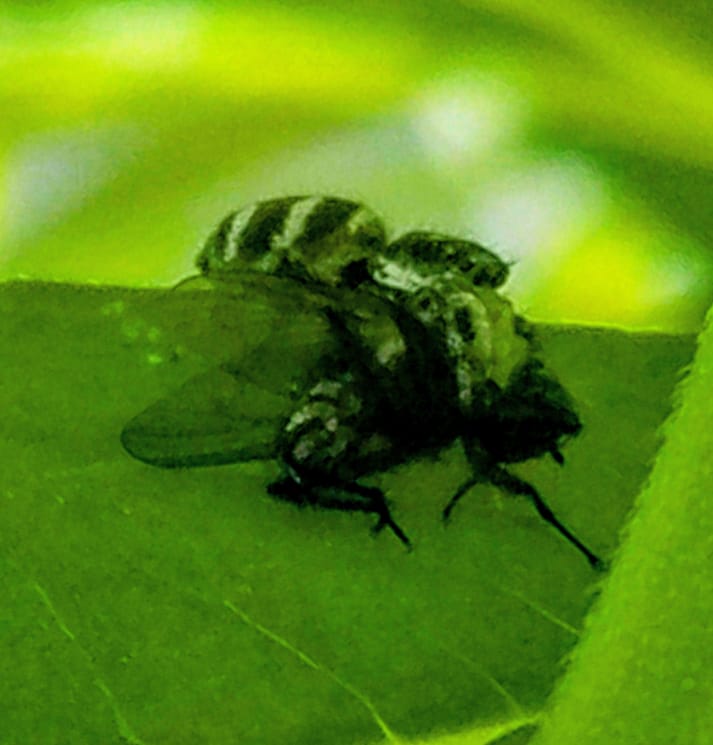 Conflicts between insects happen all the time in the garden and often end in death. The level of violence in nature used to bother me, but I have come to understand the balance it brings, and there is no changing it. These creatures are hard wired to do the things they do. It’s all instinct. See enemy, chase enemy, hurt enemy, kill and consume enemy. Some insects and creatures are worse than others when it comes to this. Yellow Jackets are basically jerks to everything crossing their paths. Though it isn’t pictured here, they are even aggressive toward dragonflies. 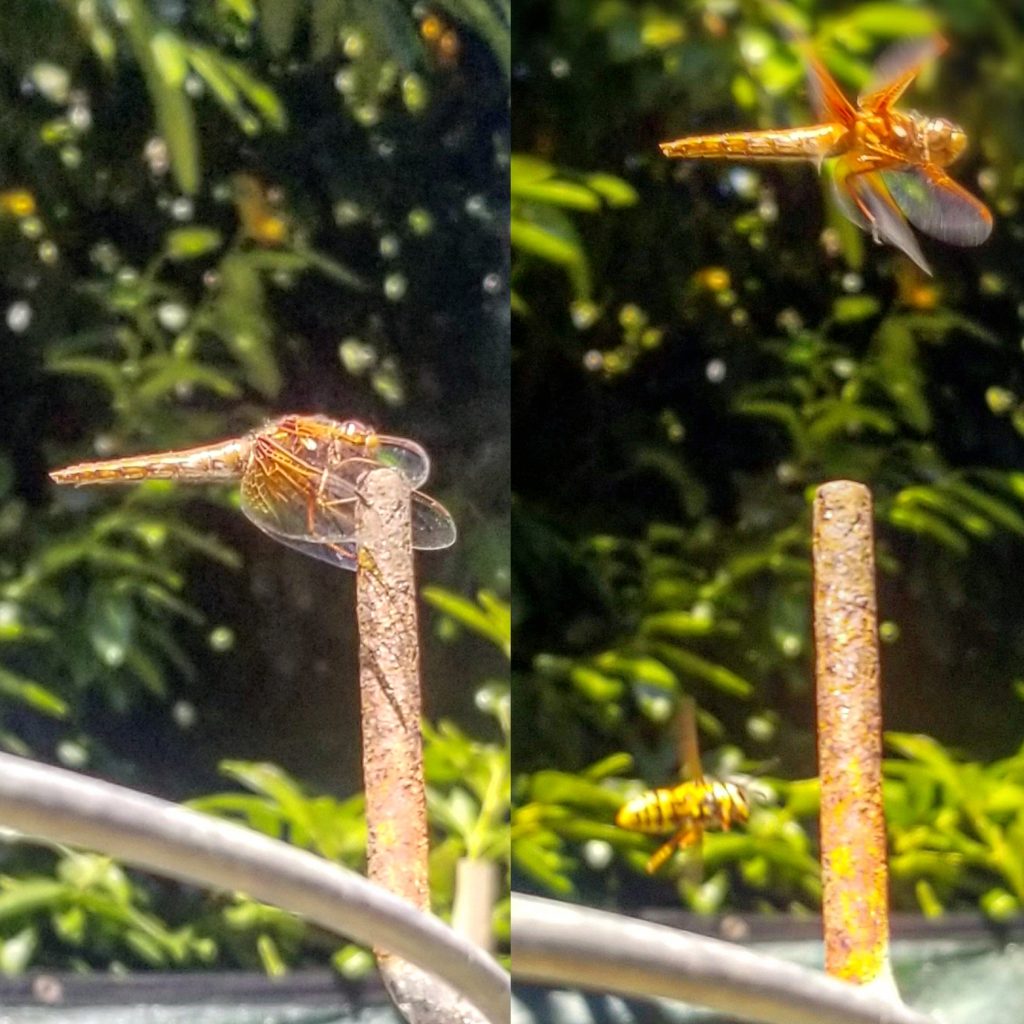 Brenden came and tightened some training, adding more plant tape and twisty ties. You can also see from this photo, the amount of inner ties they have to support the Sour Tsunami. Also, please note how clean the inside of the stalk is. On each of the more dense plants, we recently cleaned out the inner/lower growth that was never going to get enough sun. By cutting that growth off, you cause the energy to surge toward the tops. It is also interesting to note the thickness of Sour Tsunami’s stalk and branches compared to either RG or ACDC. The THC plants are thicker than the ruderalis, even THC plants with CBD, like Sour Tsunami. 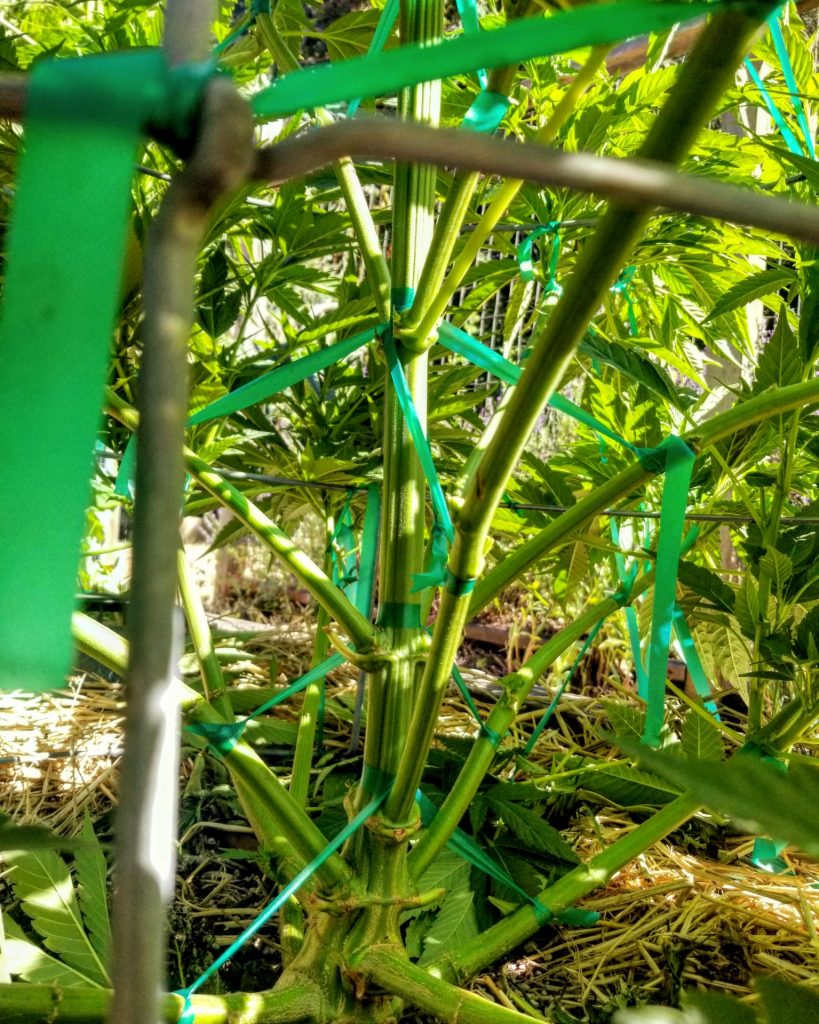 RG 11 is going to be a special case, though she might not be the only one requiring what I’m about to describe. Her branches are not behaving like standard cannabis when being trained. When training, most branches will bend at the point they are tied to the cage. The entire branch turns upwards. On RG 11, the tops turn toward the sun, but do not bend the entire branch upwards. Instead, the branch leans upward with a curving end. We are fortunate to have put this plant next to a bed without cannabis. The branches will be able to extend. We see the same issue with RG 5, ACDC 7, and ACDC 17. However, when it comes closer to harvest, and these thin, trained branches develop more flowers than they were designed to handle, they will need support, or they will either droop to the ground, or more likely, the branch will break under the pressure. Either situation is unacceptable. Branches bending and resting on the ground are prime for soil based insects and pathogens. So for this plant, the other ruderalis, and all these branches, we will have to provide extra support. Again, we’ve learned this the hard way, by losing entire branches during flowering. Because this is a precious medical plant to us, we will go to whatever extremes we must to support each and every branch. 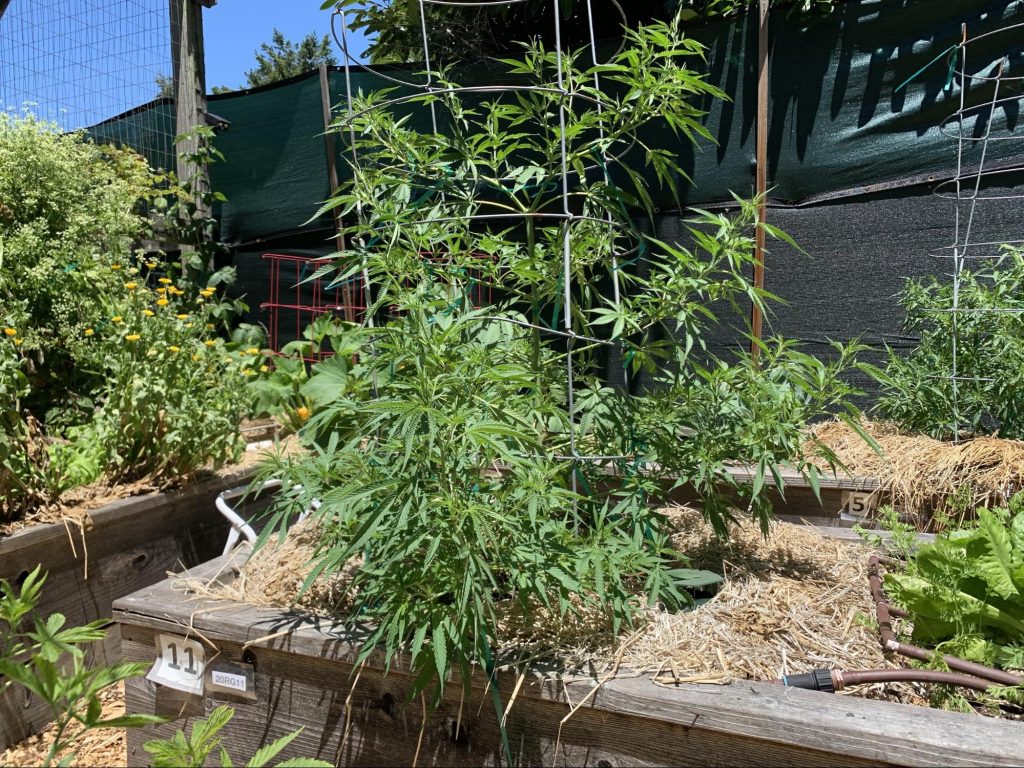 I return with a blog next Tuesday. It will be a plant by plant update on where they are, and where I think they are going. I also wanted to have something a bit more formally written about each plant prior to next Thursday, July 16, when I host a Virtual Tour of my farm for an online Oaksterdam class. I’m looking forward to answering any questions from students. Wish it could be in person.

Have a great weekend. Stay safe. Survive and vote. 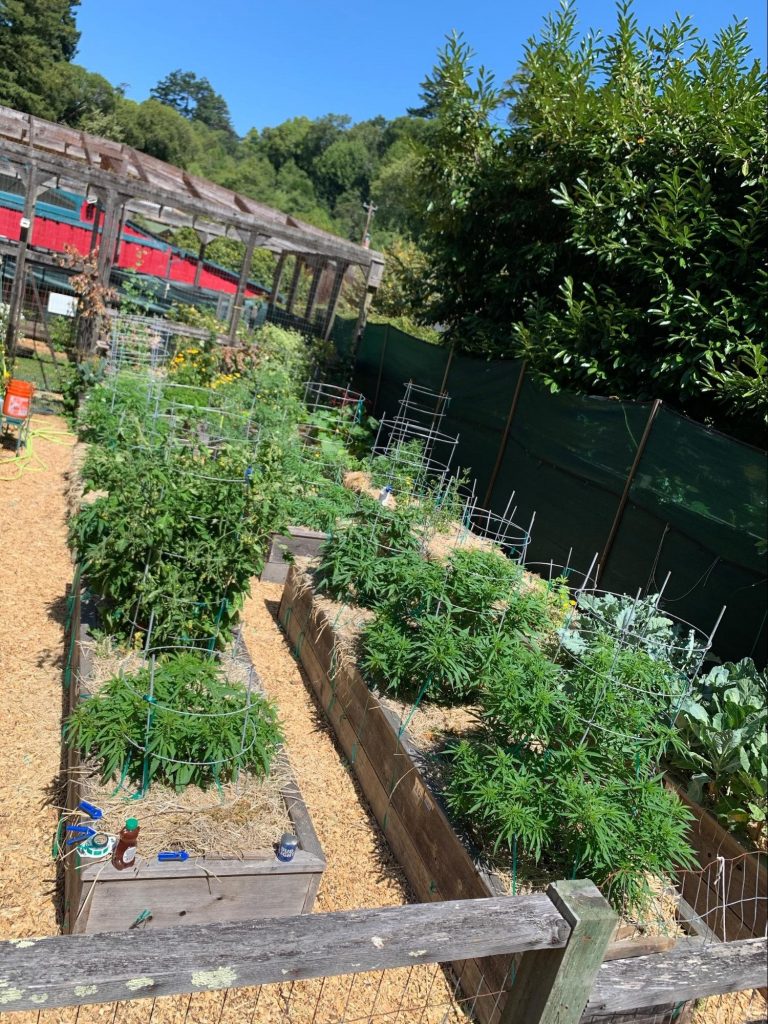