2020 Isolation Grow: And Then, There Were Two 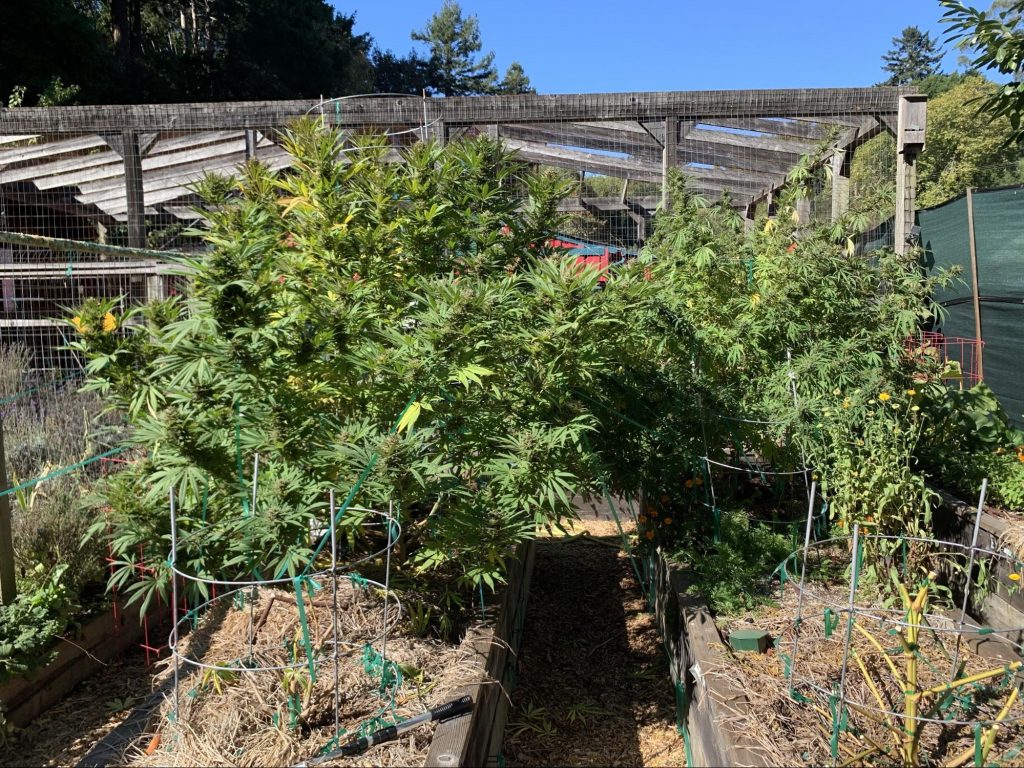 Seven plants are now drying in our cottage. On Karen’s birthday, we took down White Widow and Bubba God.

So now, the waiting game begins on the last two plants, while we check readiness for the seven drying plants. We will absolutely have to bring a few plants in for trimming before we’ll have room to hang either of our giants. Ideally, several plants will be inside before these two come down. But it doesn’t always work out that way.

One thing we don’t have to worry about today is mold spreading. It’s currently 86℉ (30℃) 27% humidity. Mold will neither spread, nor form in 27% humidity.

This is a distinct relief for us, because this means, after a brief inspection (only two plants to check now), I can put up the feet and perhaps sample a bit of what we’ve cut down so far. 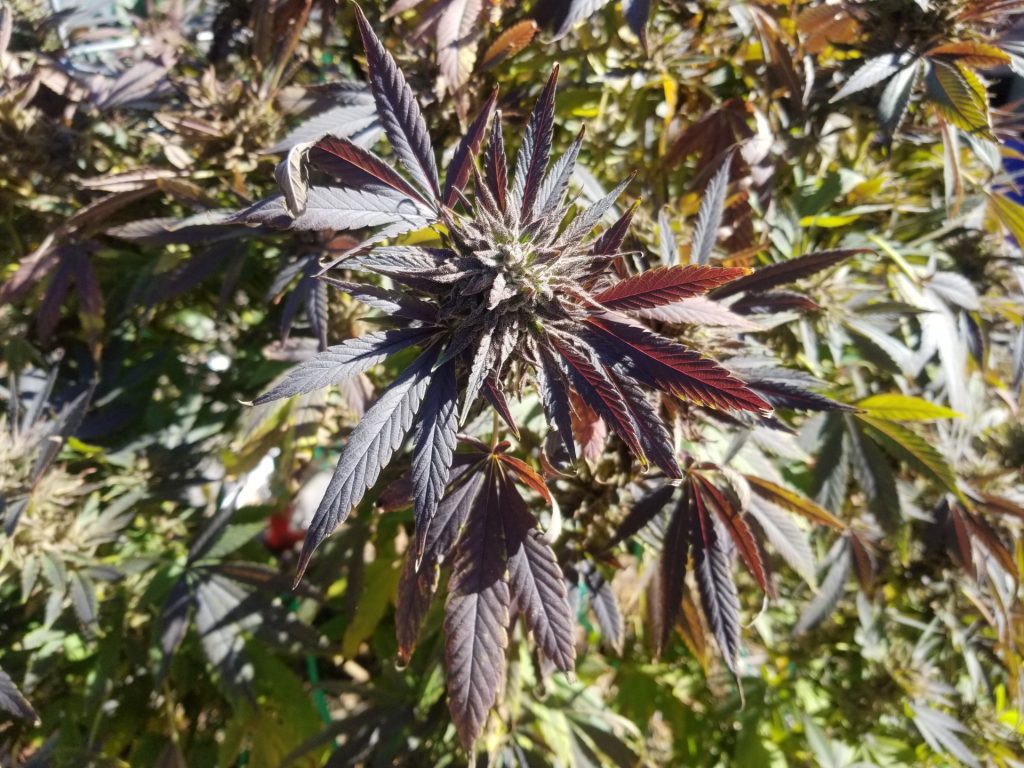 Btw, Karen’s birthday yesterday was busy, but very sweet. Bee fresh made a pumpkin pie and it was about the best I’ve ever had, and I’m not a pumpkin pie guy. On the other hand, there is my love, who arguably would eat pumpkin pie filling from a can, if no pie be available.

Thought two of the drying plants might be ready for trimming, ACDC 8 and RG 5. Not yet. Perhaps by tomorrow. These are plants that will not really be trimmed. They will both have every flower cut from the stem and dropped into jars.

Very, very happy with the heat wave we’re having, combined with extra low humidity. These are not prime mold conditions, so it was not a surprise to not see any new mold during my inspection last evening. This last blast of heat should serve to help finish the flowers on these last two plants. 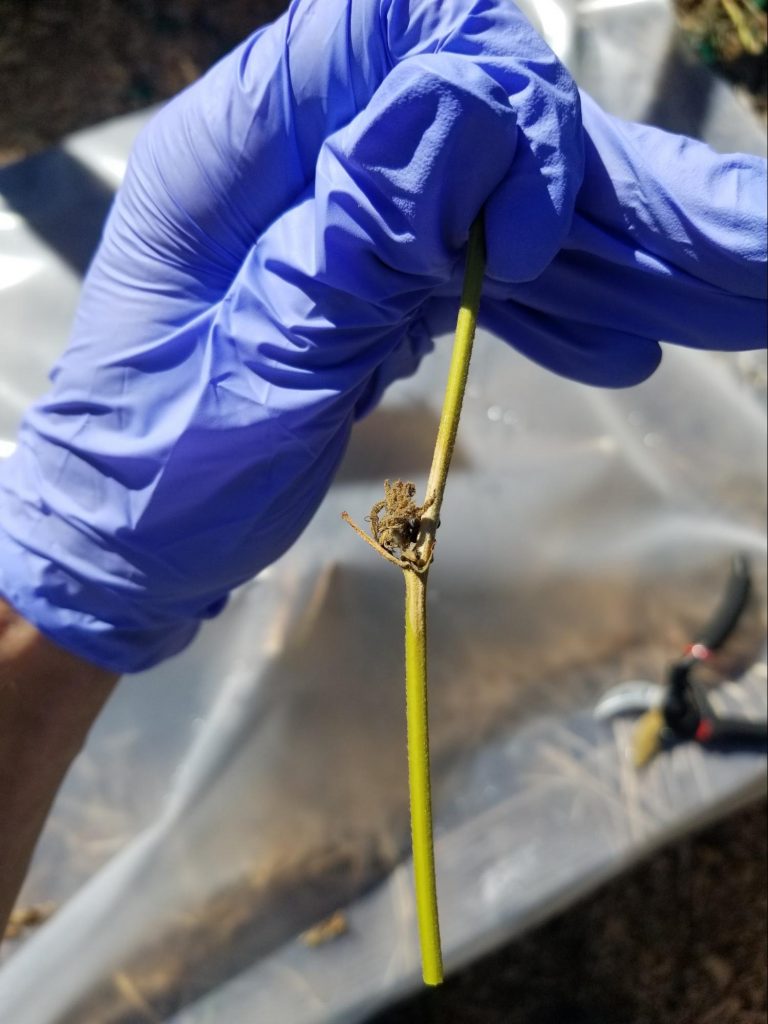 Today is day 56 for both RG 11 and RK 18. So both are entering the harvest zone. I checked tops on them this morning, and neither are quite ready. Trichomes are filling. I imagine both plants will be harvested closer to the middle of next week. I removed one top from Ringo’s Gift for mold.

Unlike other years, very little of our mold this year has been from worms. The last BT spray, which was the one I used fresh BT, seemed to really do the job. The mold we’re getting now is mostly from debris that attaches to a flower, gets wet and molds. We remove debris using our tweezers virtually every inspection, but cannot catch all of it. Having only two plants to check now, though they are large, it is much easier to find the problem areas. One other key mold location is where leaves have been stripped down the sides of stems. During high humidity, those strips can begin to form mold on stems.

As I’m sure some of you have been able to tell during the last few blogs, shade is taking over the beds. In just a few days, we went from eight hours of sun on plants down to five. It’s time. 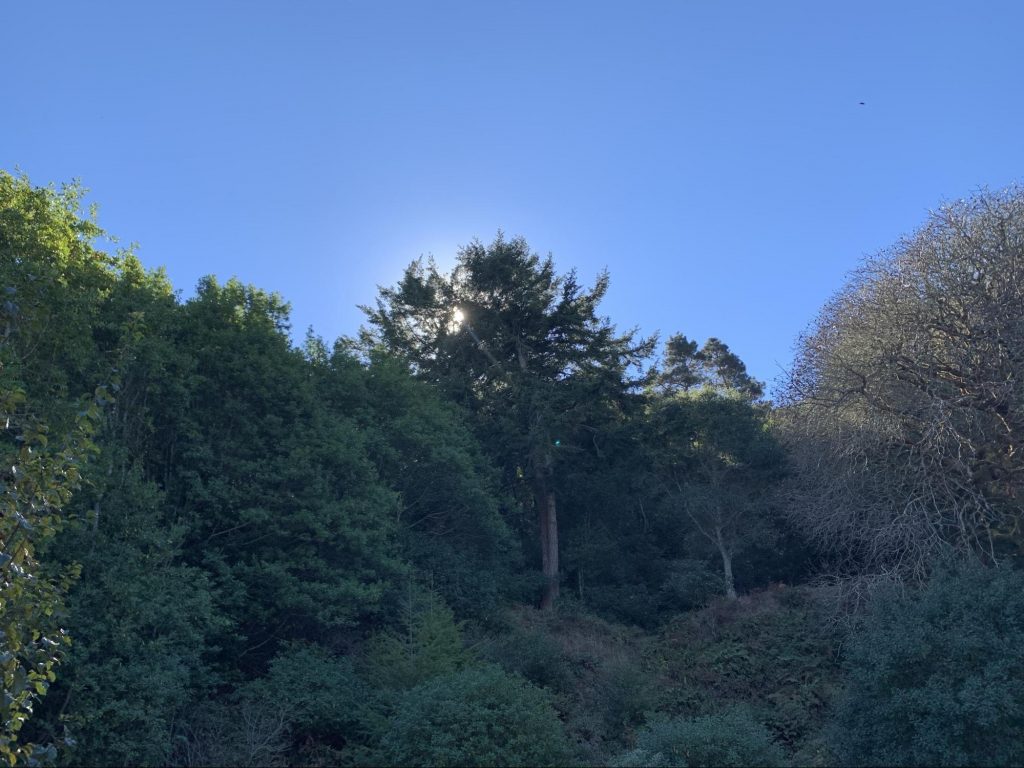 The sun skirts the top of the southern hill line on our property. In a few weeks, she’ll disappear behind that hill for winter.

I made a very interesting discovery after harvesting White Widow. She was probably our most disappointing plant this year. Last year, we grew two and totaled over five pounds between them. This year, the plant grew well at first, but then seemed to stall. The flowers are ok, but nothing like last year. These flowers look more conducive to edibles.

Upon removing her, I have discovered the problem. I believe I alluded to this in a previous blog. The dirt in this bed needed to be fluffed and evened, from edge to edge. Instead, the dirt in the bed all tilted toward the center. Any water in that bed this season, headed directly for the center of the bed and settled there on the root zone. White Widow tends to need more water than other cultivars. Rainbow Kush also needs extra water. But in this bed, (#13) all the water seemed to move and settle in the center. I tried to flush the bed once, but I realized I needed to completely dig out the dirt and replace it in the bed, but balanced, so moisture travels down and not directly toward the center. Once the plant was well established in the bed, sitting in the bottom like a bowl, there was nothing I could do until after harvest. This plant had too much water. She was turning yellow in every leaf and stem. The only thing green on her in the end were the flowers. I mentioned this bed needs some work, and it will get work this week, and be fixed, prior to solarization. 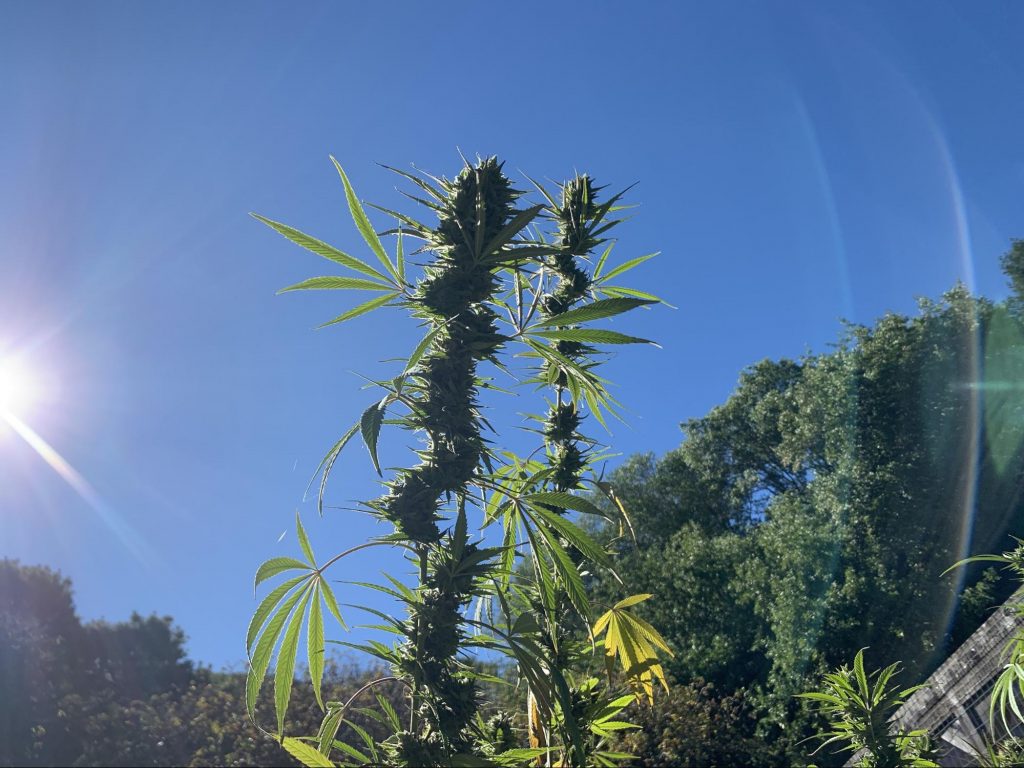 No idea why one top is so much fatter than another, in virtually the same spot on RG 11. Again, note where the sun is in relation to the treetops. She’s sinking fast.

So all we’ve got left are this year’s giants. RG 11 is the plant you see me putting into the ground on video in the Planting Day blog. She has been an exceptional growing ruderalis. 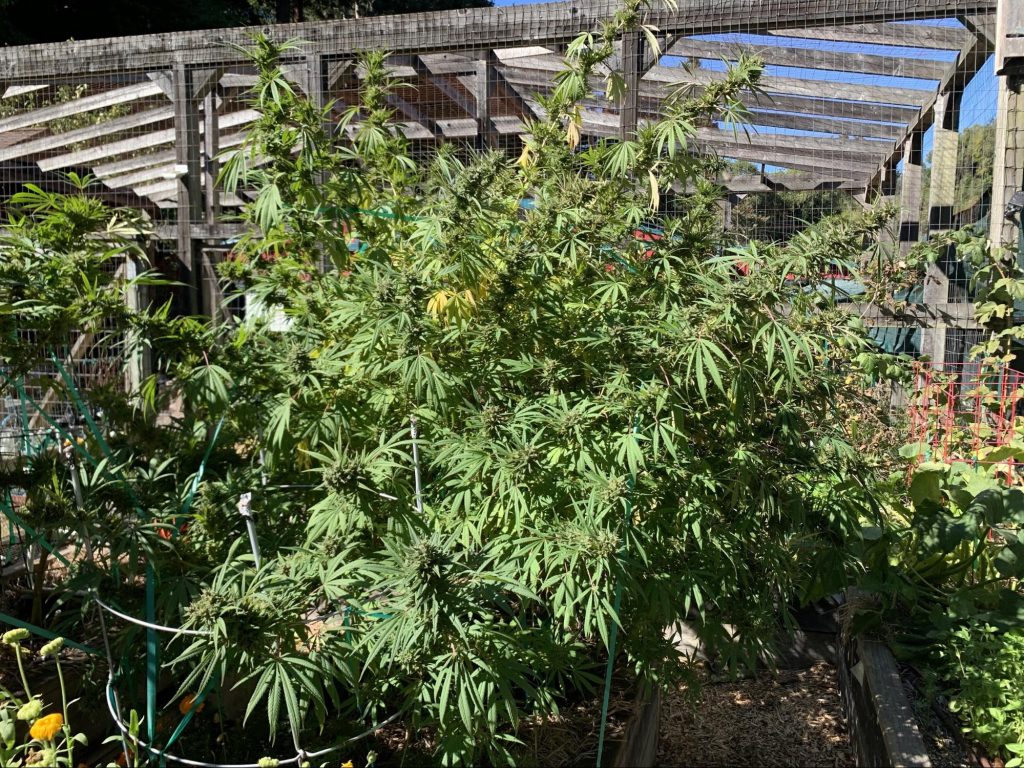 This is the tallest cannabis plant I’ve grown to date, and also the largest ruderalis like plant.

Across from her is the largest plant, by circumference, that we’ve ever grown, Rainbow Kush in bed 18. 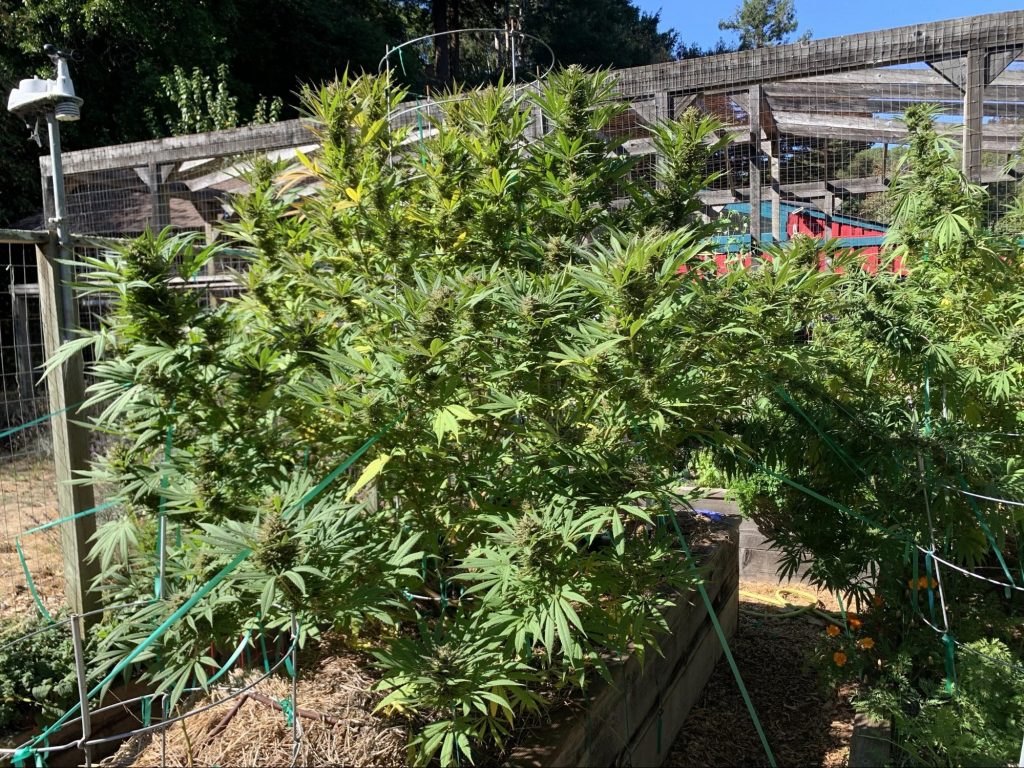 This plant represents some of Bee’s finest training work this season. There were plants on either side of this beast, and she usurped the plants in both directions. In fact, she is probably the main reason we’re planning on growing less plants next year. Because we can now grow them like this, to do so with complete freedom requires not growing cannabis in the next door beds. Give these plants room to grow, and they will.

One of the most impressive aspects of this plant, pertaining to training, is the development of all the lower flowers around the plant. The same was true with RK 16 that we brought down a few days ago. She had enormous low level flowers. Getting lower level flowers to grow like this requires early training to take full advantage of the sun during the veg growing part of the season. Doing so sets up the flowers for a chance to fully develop.

ACDC 8 and Ringo’s Gift 5 are in the house for trimming, though they are only being trimmed directly into jars. This is all to be tincture and pill based medicine.

Tomorrow, the real trimming begins with CBD God, and possibly White Widow. The drying cottage is beginning to make room for the last plants to come down.

Have been delighted with 90 degree temperatures the last two days, with super low humidity. The main reason is the impact this heat will have on bed 22, the bed being solarized. It was also nice to have a couple of days where I knew no new pathogens were taking hold on our remaining plants.

I am curious which plant will have the highest yield. For most of the summer, I assumed RK 18 would be the yield champion this year. She has enormous flowers that weigh a lot, so I could be correct. But RG 11 has so many flowers. They are not as fat as the RK, but there are so many more, and they seem to fatten every day right now.

A close examination under a mag lens reveals that RK 18 is beginning to turn. There are now amber trichomes in the tops all over the plant, but not enough yet to harvest. Based on what I just saw, my guess would be she will be brought down on Tuesday or Wednesday, which would be either day 59 or 60.

Ringo’s Gift in bed 11 is covered with milky white trichomes, but she’s not turning just yet. If she starts to turn tomorrow, we’ll take her down before RK 18, because she is a CBD plant. She might come down Tuesday, and RK 18 would come down Wednesday. It’s all just theoretical planning right now, but it will soon be decision time. Both plants are getting close.

We’ve trimmed CBD God and gotten another solid pound of flower from the plant. We were going to trim White Widow as well, but she is only about 50% dried. Some pop right off, and some tear down the sides of stems. They get another 24 hours to finish. We’ll trim her tomorrow afternoon or evening.

Before we trim White Widow, we will take down Rainbow Kush in bed 18. Probably gonna time lapse record it for giggles. 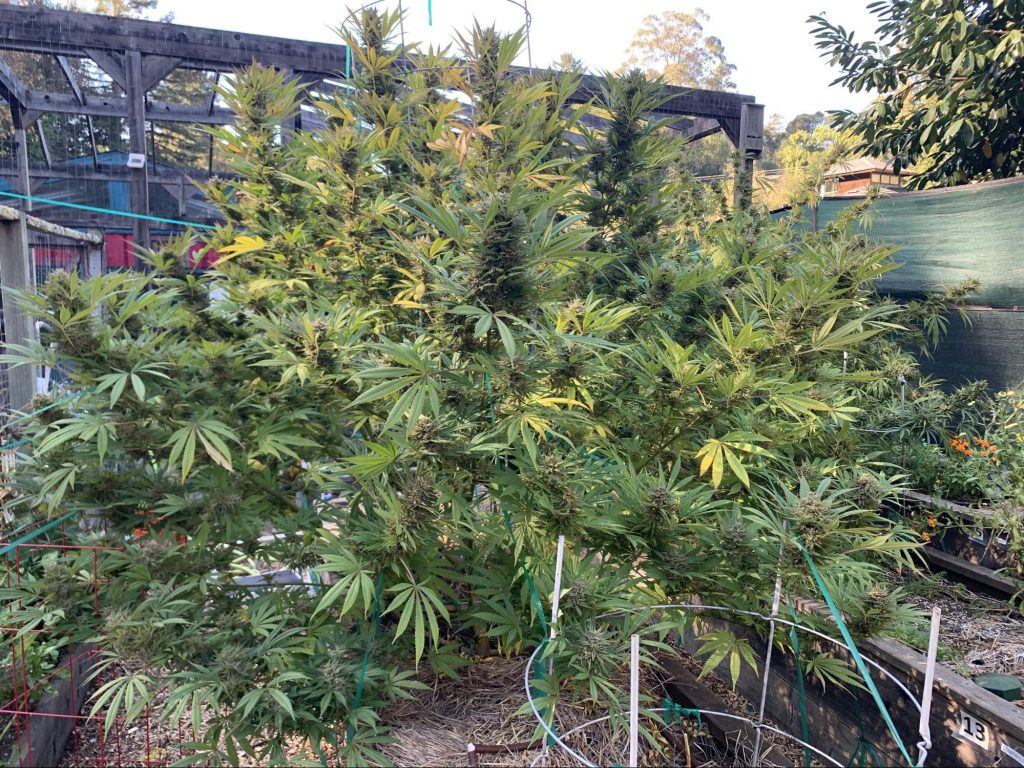 One last photo of RK 18, sunlight dancing on her tips, the day before she comes down.

Survive and vote. Be back Friday. The finish line is coming into sight. 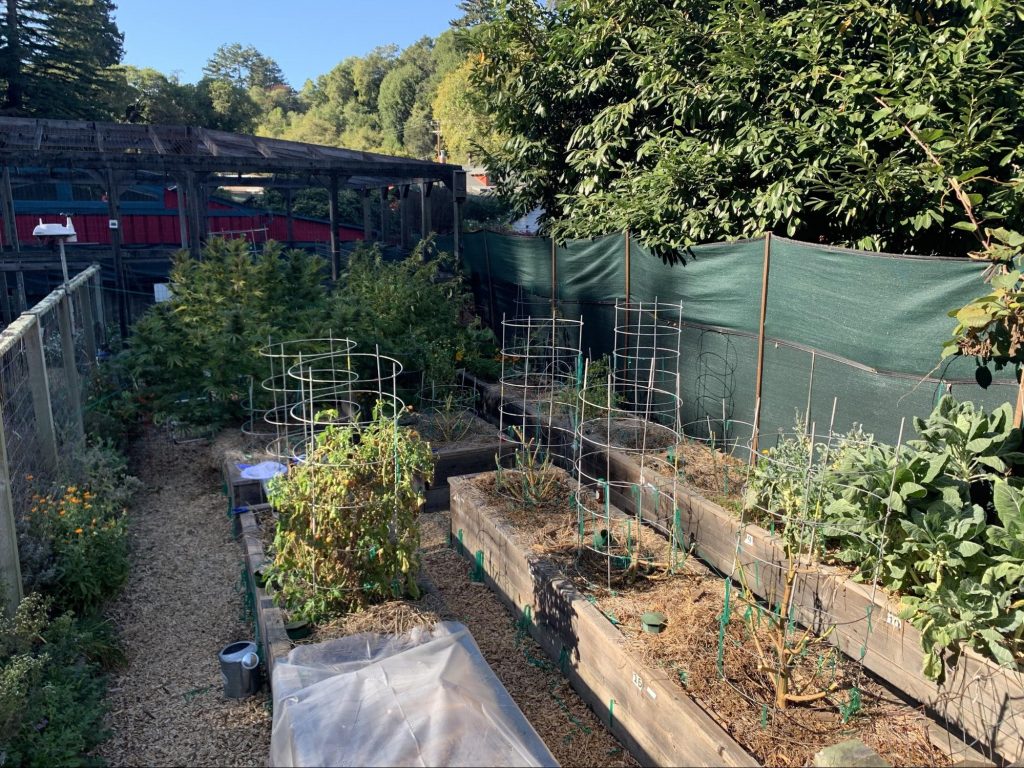