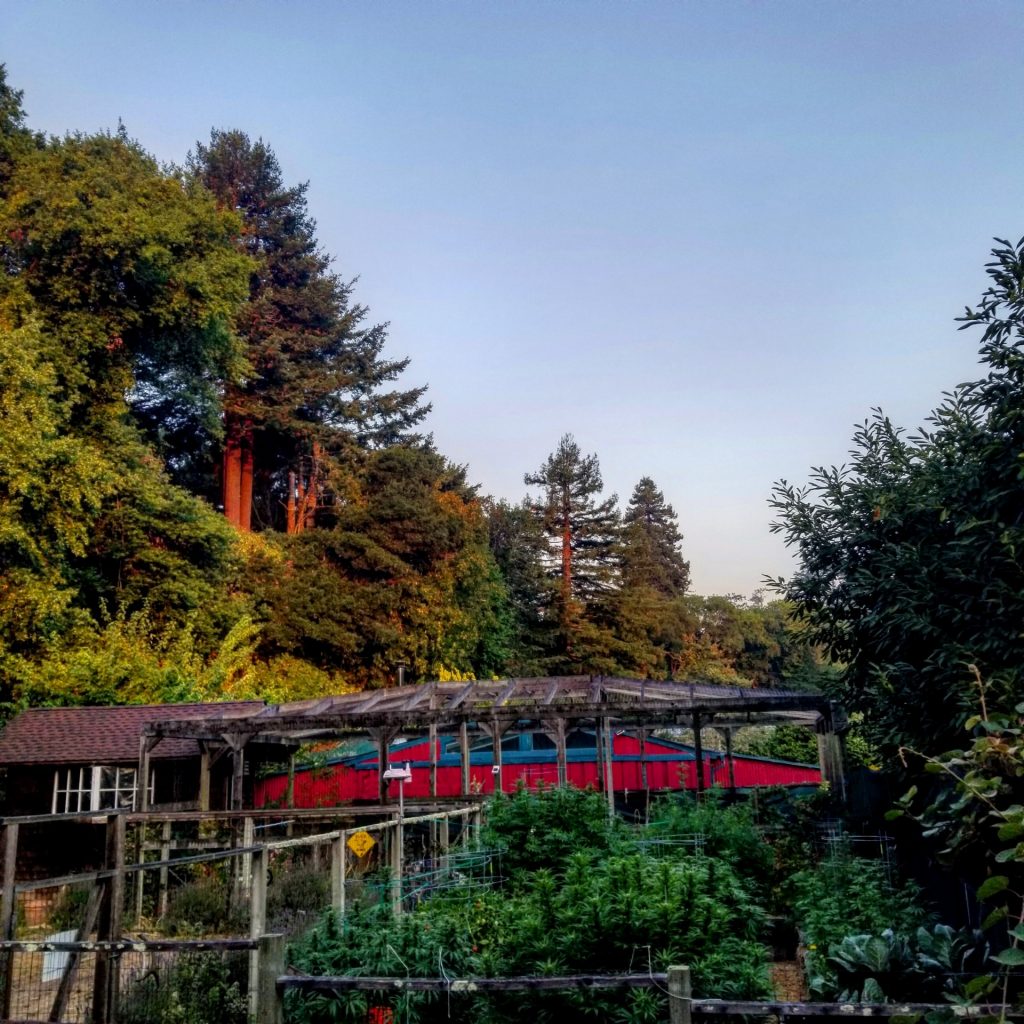 Dawn rising, this is a view of some of the southern hill treeline that shades my crop in afternoons and evenings.

All evacuees in our area have been allowed to come home. Our entire region of the world breathes a sigh of relief, and offers our sincere thanks to all the firefighters, for what they’ve done, and for the weeks of work still remaining. We can all go back to work. Despite our perceived safety, I will be keeping one eye on the fire. Fire season has only begun.

Our epic tomato plant will be pulled soon. Bee took about 100 ripe tomatoes and made a sauce. Some of the others went into last evening’s all time great BLT sandwiches (made with avocado and/or mayonnaise).

We’ve given away so many tomatoes this year. The mostly dry method of growing and farming is what I’ll do from now on. After decades of tomato growing, this was the finest plant I’ve ever grown. The dry method has absolutely minimized any mold potential. I would not hesitate to grow another tomato between cannabis. It’s a great companion plant, with the added benefit of such sweet, succulent fruit. I told you I was planning on bringing her down for the flowering period and we are at that point.

In a few days, she’ll be pulled, and her cage will remain for ACDC 22 to take full advantage during her last month of flowering. I suspect that bed holds the third cannabis plant to harvest. As robust and lovely as the flowers are on this half ruderalis, we’re still pouring honey into the hole at her base every other day to try and ward off whatever is trying to impact her. She’s got a month to go before she comes down, and we’ll find out if all this work has been for medicine, or a systemically moldy plant that we have to dispose of immediately. I’m starting to feel she’s going to be good, but we won’t know for certain until we cut her open. Full Disclosure: Were it not for this blog, I would have probably pulled this plant. If I’m growing on my own, I don’t look for extra work. But for this blog and educational purposes, I’m glad we’re trying to work with her to harvest. These flowers are definitely worth fighting for.

At a glance, you don’t see anything wrong with her. It’s only if you watch the pattern of leaf deterioration that you’re struck that this isn’t entirely normal. The way individual fan leaves start to turn yellow in spots, but then turn brown at the edges and lose all lustre. It’s only the fan leaves, not the sugar leaves, and not in any of the tops. Yet. Right now, she’s getting frosty and the buds are beginning to plumpen. 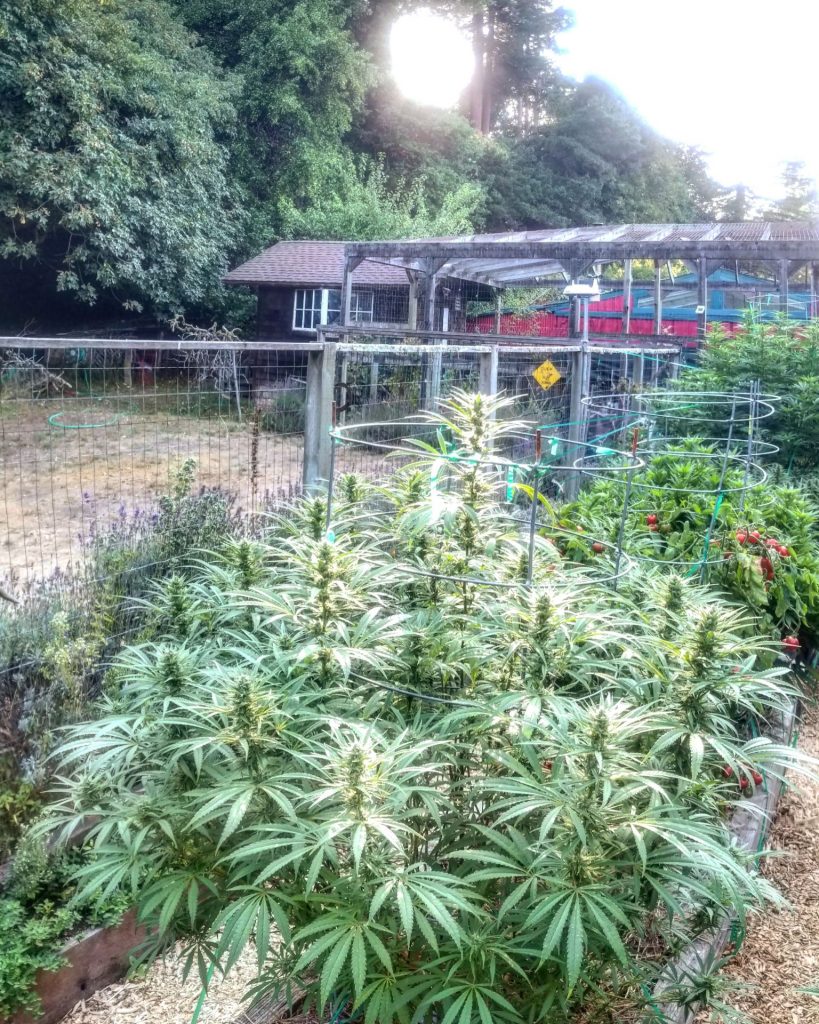 ACDC 22 approximately one month from harvest.

This year, I’ve come to realize that BT does not age well. You really need to use up what you have each year, and start the next year with a fresh supply. The first way I notice is the smell. The organic BT I bought this year smells so much stronger than the bottle I was using from last year. Bee and I have been noticing more active worms than we should after spraying BT only four days ago. Also, during this brief heat wave event of two-three days, the humidity is going to drop much lower than normal. Those conditions are literally perfect for a BT soak. Remember, afternoon is the ideal time for a BT spray. There are no issues with the sun, and afternoon is when cabbage moths seem to target the plants.

Every plant but Shiatsu Kush got water this morning, though it will be the last water for Sour Tsunami, and possibly for ACDC 22. I have to be careful when there is a heat wave, which we have this weekend. If we were not having such heat, I probably would not have watered Sour Tsunami today. But we’re getting close to starvation time for all the plants. Neither Sour Tsunami nor Shiatsu Kush will get another sip of tea. You want to cut that off at least two weeks (I prefer a minimum of three) prior to harvest. Let the plant finish as nature intended. Less tea in the last weeks means more natural flavor of that cultivar, at least that’s how it has seemed to us.

Tea poured on a hot, smoky morning. This weekend is one of the hottest ever on record in California. It won’t be a record day for us, though it will be very warm. Won’t have to worry much about powdery mildew today. If it gets hot enough, all powdery mildew will die.

But we’re close to the coast, so we’ll get whatever break there is to find. 90 degrees is very warm, but it’s not that warm under very large trees. 25 miles from us, it’s liable to be over 110 degrees today (43.3℃), and no one is prepared for that level of heat.

I will watch Shiatsu Kush today. She has not been watered in weeks, nor has she gotten any tea recently. I’ll keep an eye on her stress, but she’d have to look awfully sad for me to give her any water. I don’t care if every fan leaf turns yellow (they won’t), I want whatever energy is in that plant to flow without pause into the flower. She is somewhere between seven and ten days from harvest. The pictures of trichomes filling up are coming. She is almost ripe.

Once again, we are the grateful beneficiaries of our environment. It’s hot, but the high here today of 101℉, 38.33℃, is starting to go down as shade begins to drape the beds near 5:00. A faint coastal breeze can be felt. It will be warm tomorrow, but the hottest was today. Ducks got fresh swimming water, which they have not left since around 8:00 this morning.

Away from us, however, 20-30 miles north, east, and south, all-time records are being broken by several degrees. Some places have been 10-15 degrees warmer than us. Fry an egg on the sidewalk kind of weather. With a lot of smoke in the air.

Plant inspection this evening revealed many yellow leaves. The heat had to show itself somewhere in the beds, but no plant looks too stressed. Most of the yellow are fan leaves in the deep interior, which is normal for this period of the grow. They are all simply flowering. Now that the temperature has dropped into the upper 70’s again, the plants are emerging from their daytime dormancy, and I’d imagine tonight will be a productive night, under an 84% waning moon, with lows in the 60’s.

(It’s really nice to be back to work, getting ready for harvest, and no longer being imminently threatened by fire.)

Another scorcher today and tomorrow. Watching all the plants for stress. I truly believe they are all on groundwater, but will not take anything for granted at this point. Flowering plants should never be ignored. Because if you ignore any of them for long, you can suddenly find this: 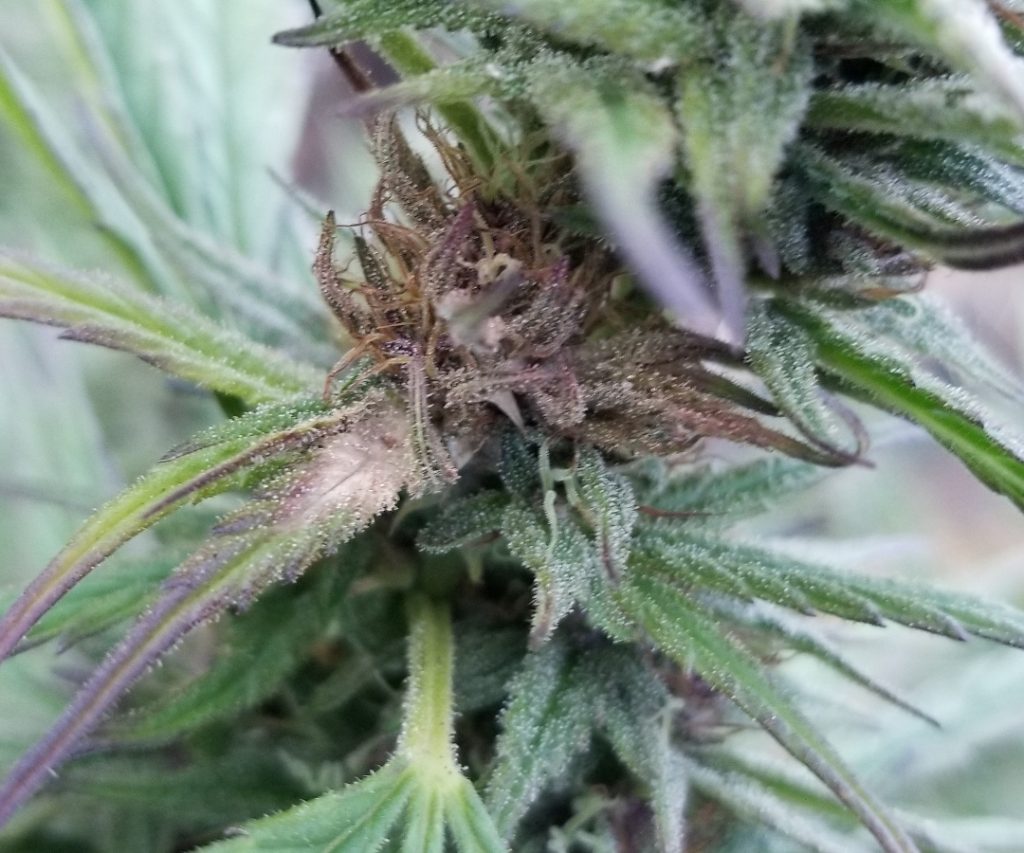 It looks like mold, right? But it’s not. Not yet, anyway. Upon close inspection, this piece of Shiatsu Kush was somehow cut, and died. This isn’t mold. It would soon become mold, but at this stage, it was simply a dead part of the plant. Removing it revealed a pristine stalk and all else was well. Left alone, this would have molded and impacted the remainder of this stalk.

Elsewhere, baby ladybugs are beginning to spread from their nurseries into other plants around the beds as they flower. There are many insects helping us right now, but to have ladybugs literally being born on our flowering cannabis, which attracts aphids, of course, and that is what ladybugs primarily eat. Sometimes in life, you get lucky like this. In addition, sometimes your plans bear the fruit of all your labors. We have planned for this. To witness the manifestation of our hopes for the garden is a level of excitement and contentment I never could have anticipated when I sat in an Oaksterdam classroom, five years ago, wondering if my wife would ever walk again without help. We are actually witnessing nature behave in the way we planned and hoped when we began this long journey five years ago. Honestly, when I watch the ladybugs spread from their nursery into other plants and do their work for the benefit of our project, it’s hard to stop smiling.

Watching companion plants attract companion insects, and then watching them keep our garden clear of most pests, is to witness magic with your own eyes. It has taken years to get to this point, but this is where we are. When someone asks me how this happened, I happily tell them the truth. “We live on blessed land, in a miraculous part of the world, with perfect water, and we work our butts off.” 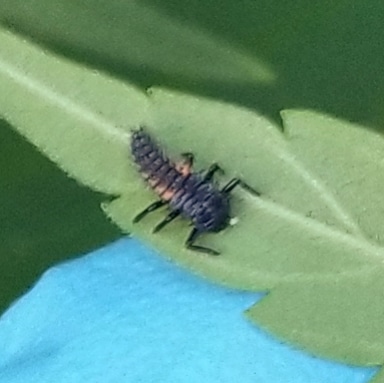 The slight orange on the back will eventually become the ladybug shell. They are all on various plants now, eating aphid after aphid. 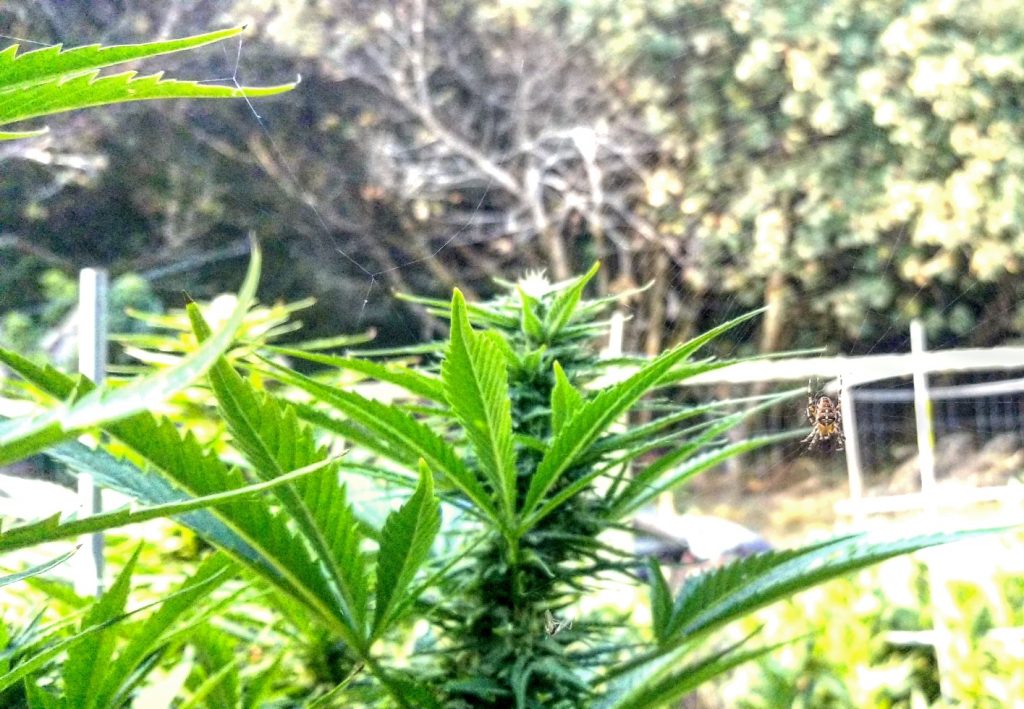 Worm hunting continues in full force. Despite the BT drenching, there are still a few worms who survive by hiding deep inside their leaf cover, and only emerging when discovered. Rooting out cabbage moth worms is a daily task. 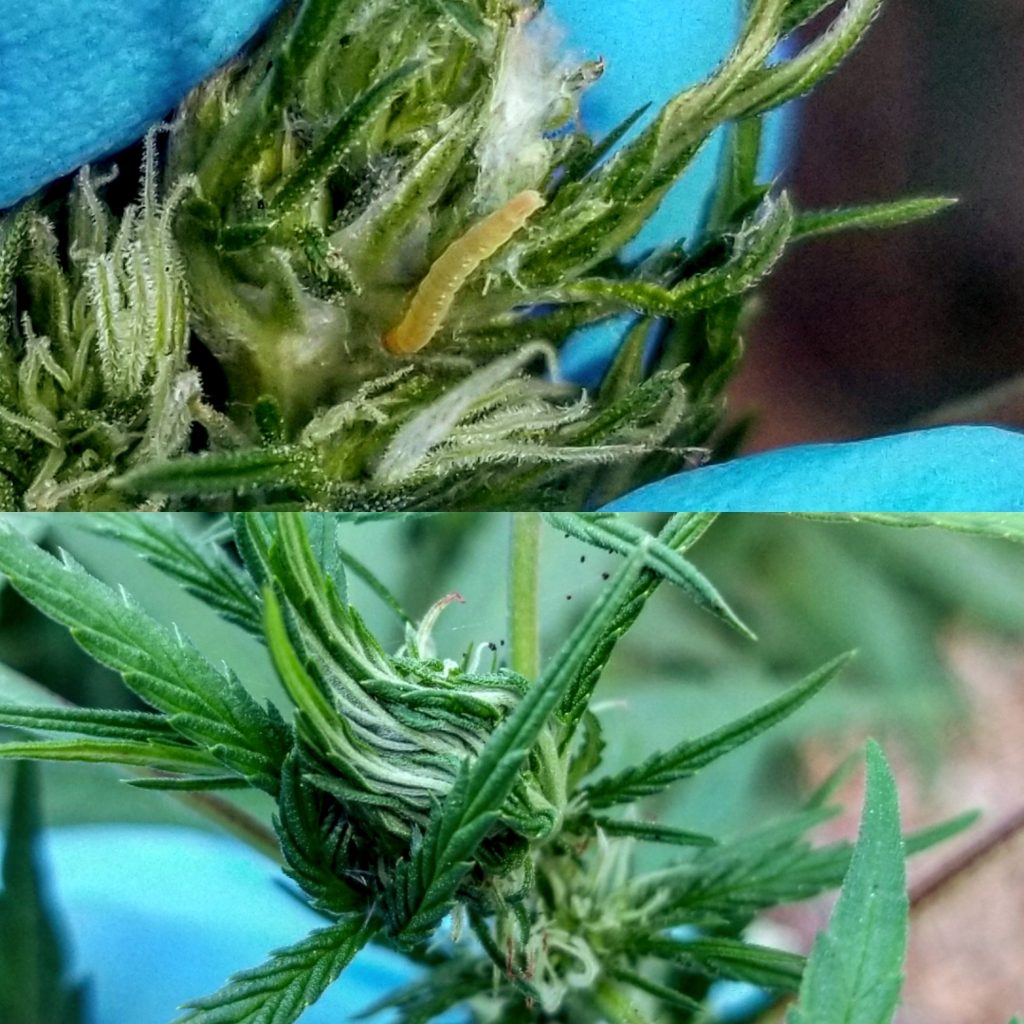 Remember, look for leaves folded over flowers. Inside is often a worm.

Looking forward to this coming Friday, September 11, when I get to host another Virtual Tour for an Oaksterdam class. Once more, I’ll wish the students were in the garden with me, scissors in gloved hands, being shown how to help and why. But since we’re not there yet (we will be, hang in there), I will be thrilled to host another class. There is much to look at in a garden full of flowering cannabis. We’ll only be a few days from harvesting our first plant. It’s an exciting time.

Meanwhile on this still slightly smoky, soon to be scorching day, we leave you for now with one more shot of ACDC 8, now beginning to show purple in the sugar leaves. 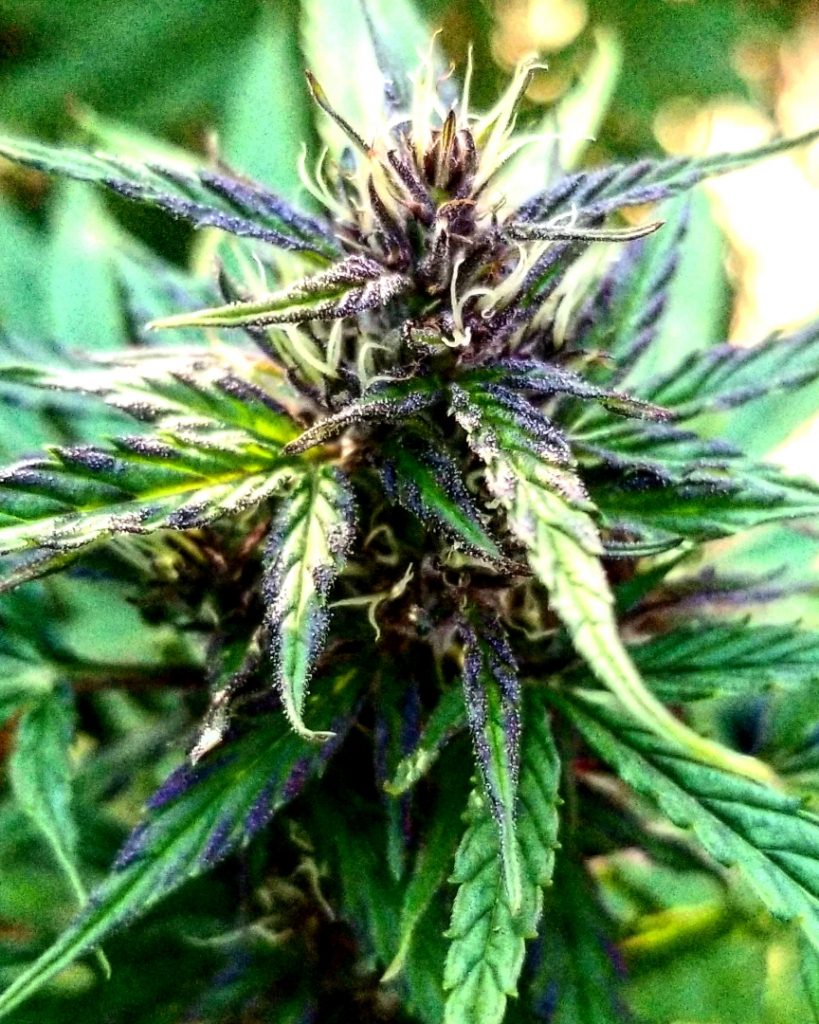 Survive and vote. The next blog drops during the virtual tour on Friday.

PS  Six months ago today, Karen and I went into deep isolation for Covid-19. 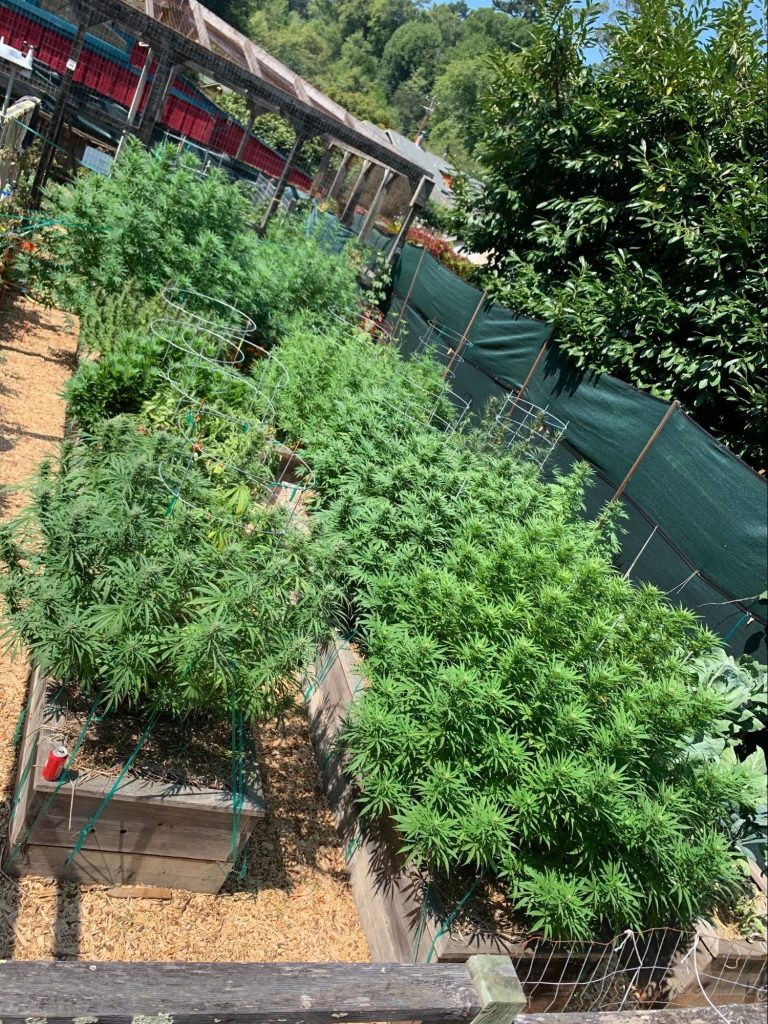