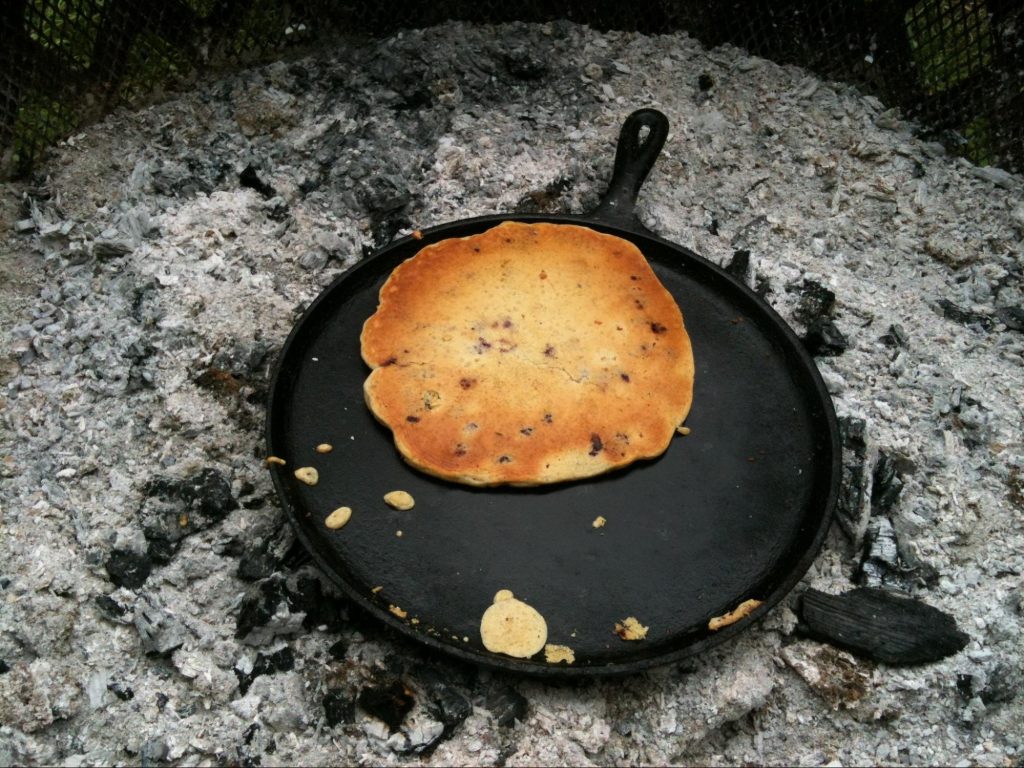 Eight of thirteen plants now have the second part of the tomato cage attached. Last year, for the first time, we had to use some third parts as well. I anticipate that again this year. But you know things are getting real when the second parts go on. That means the most serious period of growth and training are at hand.

The stupice tomato plant between CBD God and AC/DC 22 is now being pruned much more aggressively. I’m removing as many long stems without flowers as possible and some of the longest stalks, having sprinted above the canopy, only have a few flowers and don’t have the time to develop. There are so many flowers and visible fruit, but even now, I prepare to make way for cannabis training.

I love July. This is the month it gets busy, and this is the month it gets fun. July is when all the initial training begins to reveal their promise, while all the new growth has to find their way, or be pruned. July is the month plants become much larger. This is the peak veg growth month. It is often the transitional month when the humidity changes. Sometimes, the perfect conditions we’ve been having remain until the first week of August, but the last two years, humidity has arrived earlier, and descended on our beds with dread.

A recent mystery has been explained. I wrote about foxes scampering with baby deer a few weeks ago. Since then, we’ve had a fox on the property during the day, which is unusual. The only time we’ve seen foxes during the day have been in March and April, when they have babies. But there is nothing suspicious about the way the fox behaves to think it is sick. Yesterday, we discovered the reason. We have a fox den in our yard. 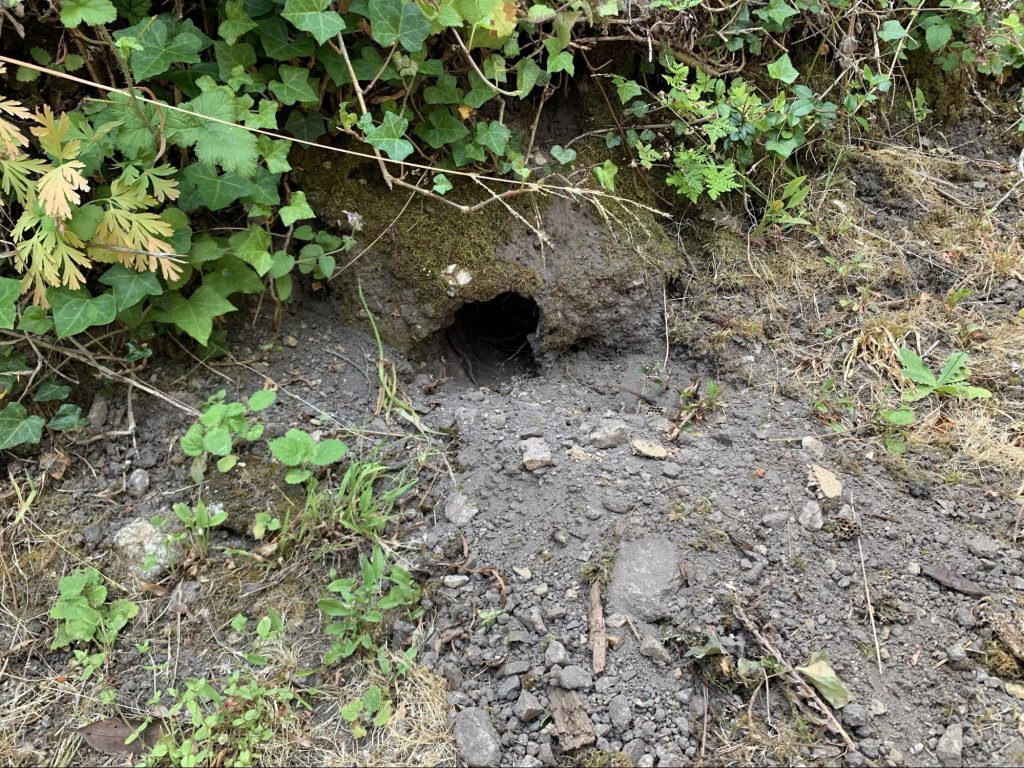 For a couple of days, there were the remains of a wasp nest in front of this den, but that has been consumed. This means we have to be very careful about keeping the aviary gate closed. A fox makes short work of ducks, we’ve witnessed this, and our ducks are already elderly. The fox was on our deck last night, so it seems to be back to normal hours for fox hunting.

It has also become apparent that moths are targeting both Ringo’s Gift plants as their ideal nursery. Even with a BT spray a couple of weeks ago, eggs are being laid and worms are being born on the two plants. Some worms are bright and obvious, and some, like the one below, are almost opaque, and were it not for the telltale folded leaf, this one might have escaped detection. It appears that these two plants are going to require a disproportionate amount of time and care regarding worms. Seeing these early worms justifies having a BT spray handy for whenever I feel a spray is required. I might even forgo a Regalia spray on these two plants from time to time and just focus on discouraging moths and butterflies from these cultivars.

There is a train Brenden began a couple of days ago that I wanted to draw your attention to. This is the top of RG 11. Note how the top has been spread out and trained to the edge of the cage. This was after one topping. Also note how there is plant tape between the two extending tops. Again, without that support, there is a greater risk of the plant being stressed to a breaking point, due to increased weight. If you aggressively spread out the top, as done here, all the inner growth will have space to grow straight up, extend, and expand outward. In this particular example, we can see where both topping and training add to the potential yield. One top becomes two stems. Those stems grow enough to be separated and tied to the ends of the cage. The growth that would have been lower on those stems is allowed full sun exposure and develops in a way it never would have developed in a shadier and more confined growing space. 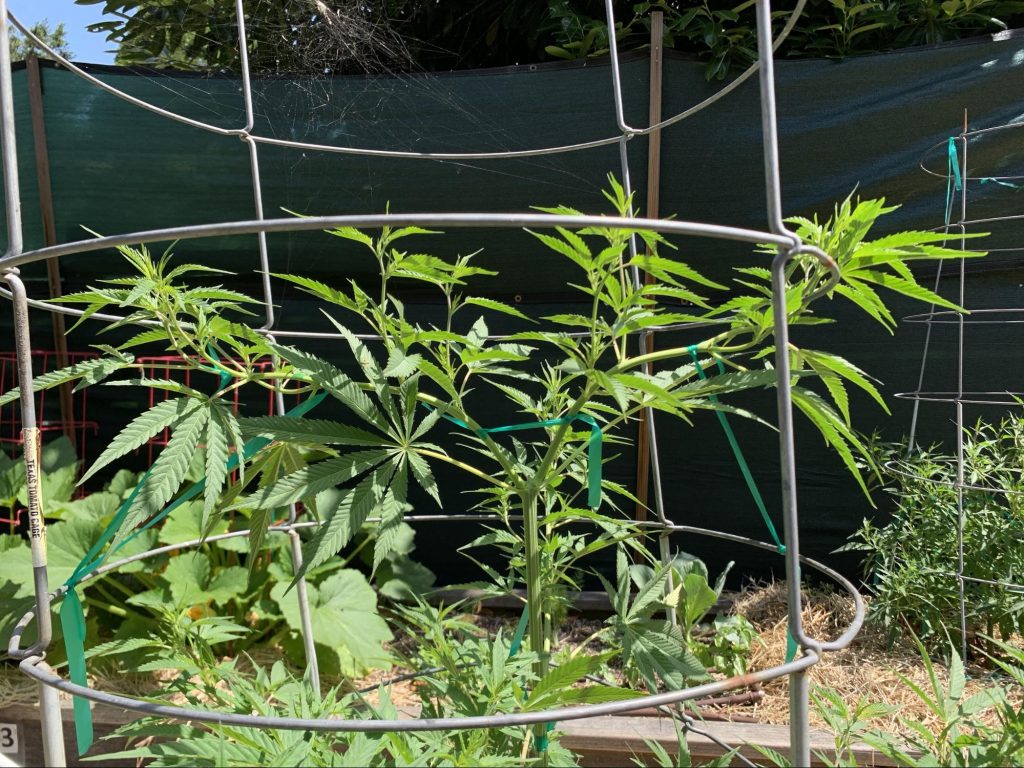 Here is Sour Tsunami, where the same type of train was done a couple of weeks before RG 11. Look at the number of full growing tops, and how much they have emerged. This is such a simple training technique. Any grower could do this, and immediately increase the yield at the very top of the plant, closest to the sun, with no other branches blocking their coverage.

Another train I noticed this morning is the one extending from Shiatsu Kush to the bottom of  RK 18’s cage. The process of giving each of those stalks room to grow up has begun and the plant is responding well. She’s growing about an inch a day right now. She had been completely stifled by her flowering attempts. Now, she is free, and with some helpful training, she now has the chance to flourish. This is the second train this year stretching from one cage to another. It probably won’t be the final use of plant tape like this. The Texas Tomato cage is a sturdy and practical framework for training cannabis. 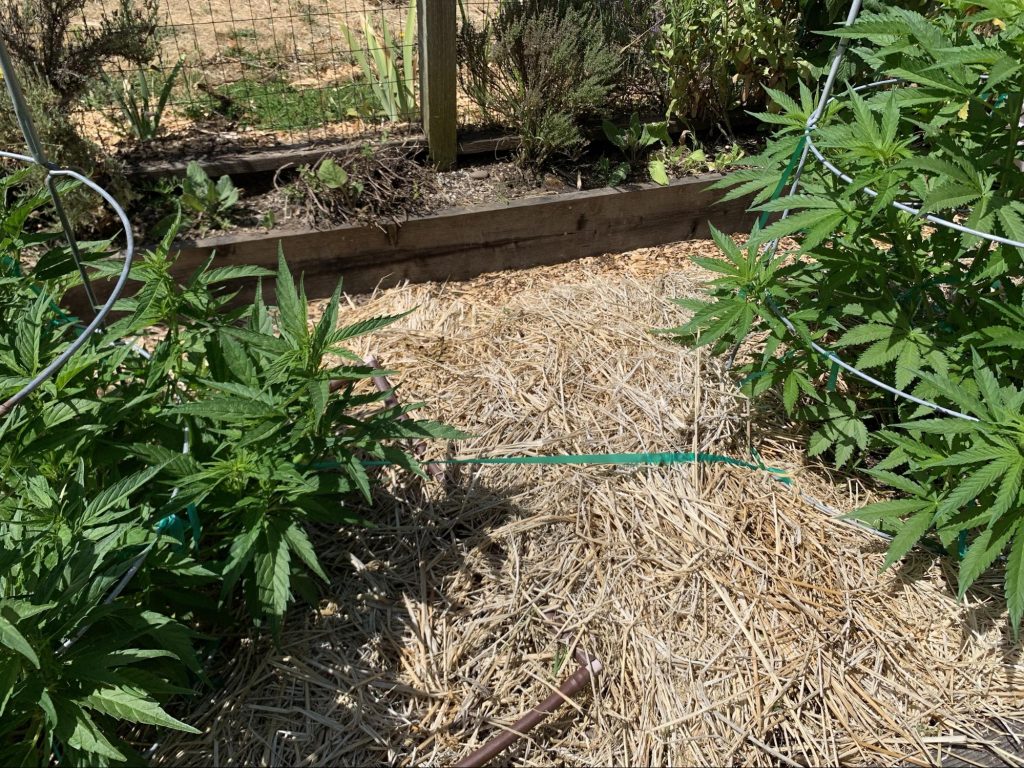 I also wanted to show another pic or three of AC/DC 17. She is still the oddest plant in the beds this year, but she is growing. I’ve grown 22 ruderalis like plants in my four years. As previously stated, this is the first year I’ve grown this cultivar from seed. Without a doubt, this is the most ruderalis like of any plant I’ve grown. Leaf structure seems to be improving, but this is still the most scraggly looking plant I’ve grown to date. And what’s with all these clusters of little leaves? These clusters have been the response to topping. I’ll let these establish, but I think I might be topping this plant a bunch more. She is definitely growing. A cautionary reminder here: This is a feminized plant, and should not be overstressed, lest she turn hermaphrodite. 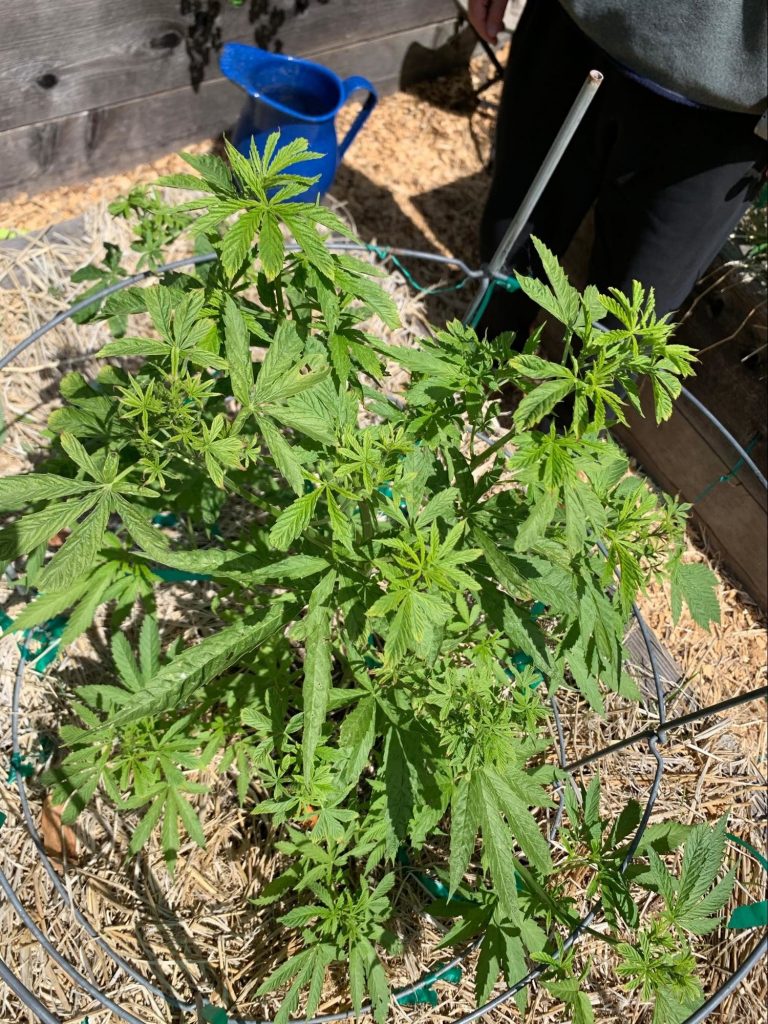 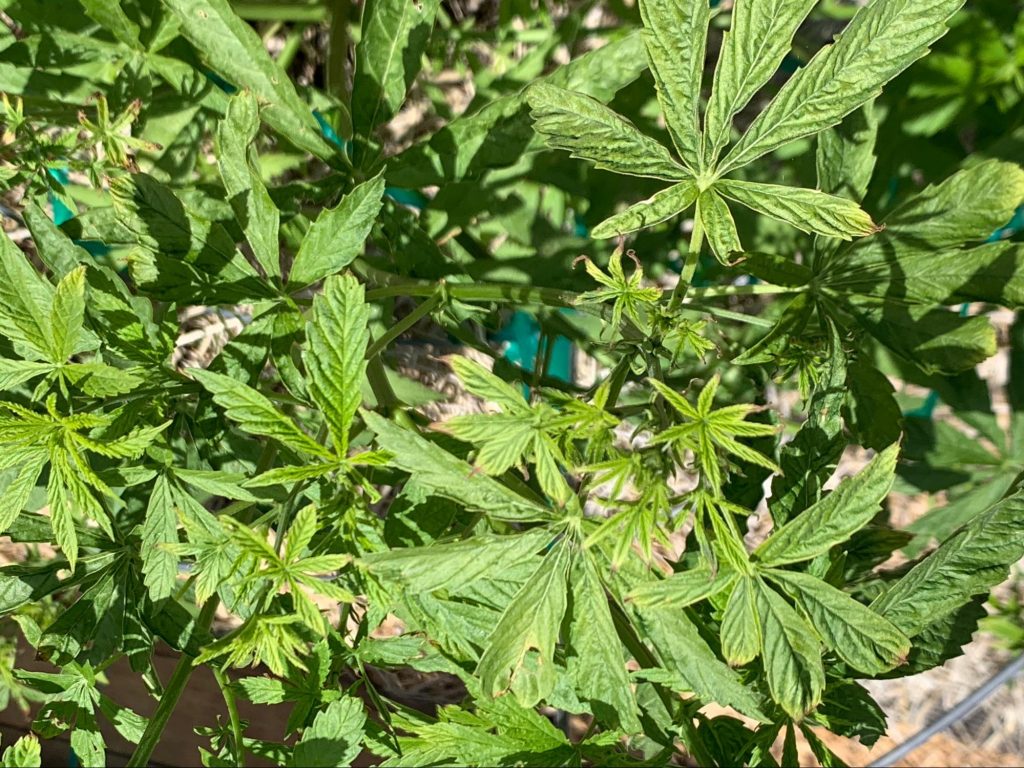 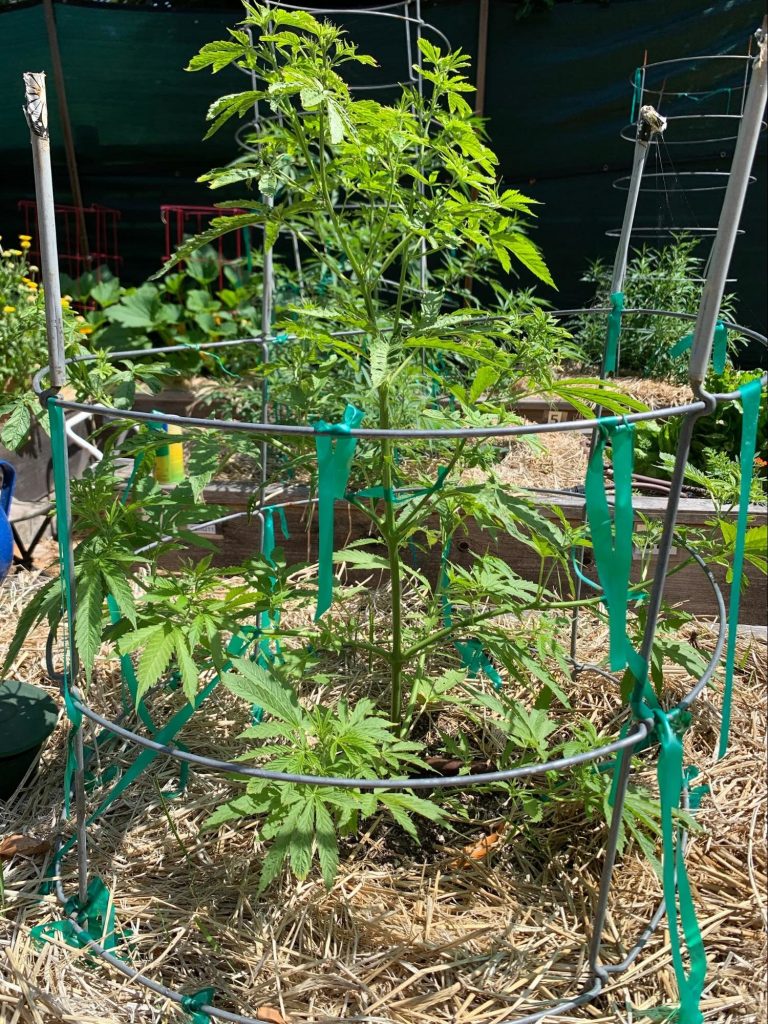 Another note on my new favorite sprinter, AC/DC 22. Of the four from this cultivar that I’m growing, this is the only one with a fat stalk. The others are still relatively skinny. This one has a base, so I know the sprint she has begun is only going to gain speed until slowing down for the flowering period. She got her first training today from me. No plant tape, just moving rapidly growing branches under a side ring on the cage, opening up the center, letting them climb and extend. There she goes.

I am a mixture of excitement and relief that one of the four AC/DC is showing such traditional, and more typical signs of growth. Further, it appears that AC/DC 7 is rebounding in similar fashion, though her stalk has yet to thicken like 22.

I close this post with a few words about July. It begins in the most active veg growth period. It ends with rapidly increasing shadows, and probably one or more plants starting to flower.

Most of these plants will not begin flowering until August, but there has always been at least one that turns early in all my grows. My prediction on which plant might turn first is based only on what I’ve seen before. Sour Tsunami and Shiatsu Kush have both flowered in September here before, so I’d suspect one or both of them. Looking at the two plants, I’d say Sour Tsunami is the logical choice. But RG 5 is still getting so much shade. All three of these plants tried to flower early. This only makes them more likely to flower early for harvest if I did not remove all the early flowering material. The plants that keep a toe in both pools during the grow don’t stay neutral for as long as those who remain in a purely vegetative state. So then, RG 5 might be logical, because I might have missed a bit of early flower in the removal. There were so many. That’s why she’s become so bushy and doesn’t seem to be getting much taller. We shall see . . .

July is when compost teas switch from veg to flower. Different plants will be added and some will remain. Kelp based liquid fertilizer will begin either the last tea of July or the first of August. This is high in phosphorus and potassium, with just enough nitrogen to keep them from becoming stagnant while the flowers develop. It’s a simple 2-6-6 formula and every plant I grow, cannabis, vegetable, fruit, and flower, love it. It’s my favorite liquid fertilizer for compost tea. It’s the Pura Vida Bloom formula.

I know every grower has their own favorite, the one they swear by. To each of you, I tip my hat for doing the work it takes to discover what works best for you. Stay safe. Survive and vote. New blog next Tuesday. 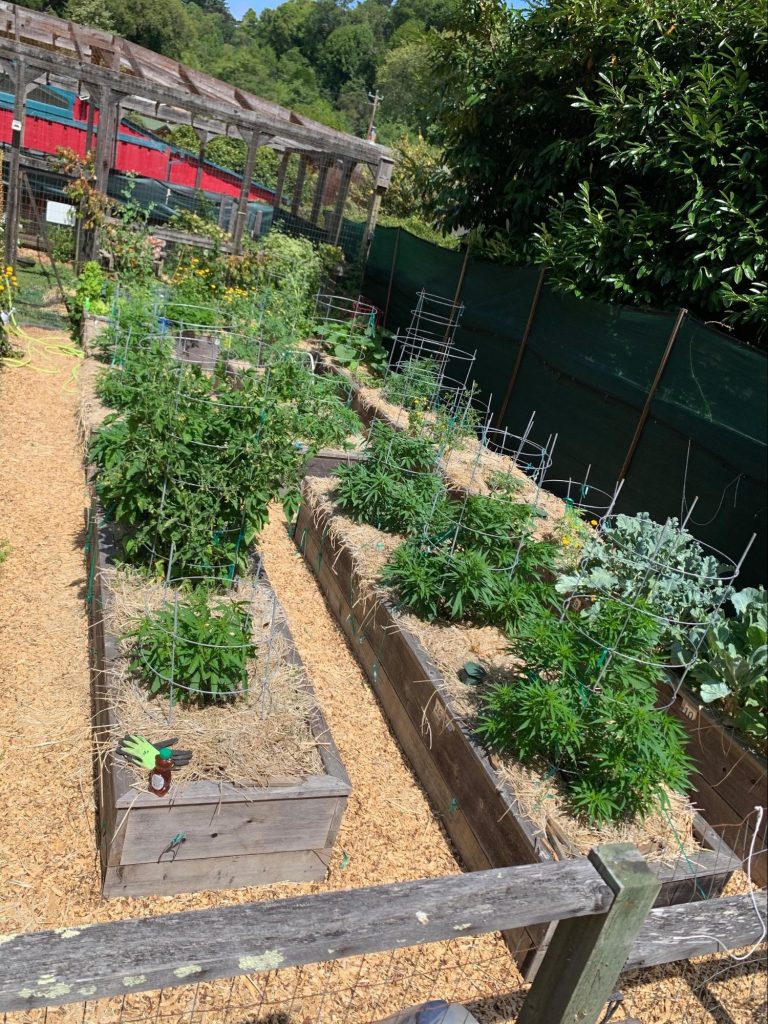