2020 Isolation Grow: Counting in the Dark

This is Shiatsu Kush, on around day 21 of flowering in this video, and we hope this is a preview of coming attractions. We want to get footage soon of bees interacting with cannabis flowers. Karen said this one was getting into the flowers, but before she started filming.

The remaining 2 ACDC that have not begun flowering are getting close. ACDC 7 began flowering a couple of days ago. In fact, my guess right now is that we’ll have all our plants harvested before Halloween, which is ideal. There might still be a November plant to harvest, but that’s not how it’s looking today. Trichomes are beginning to appear, as well. 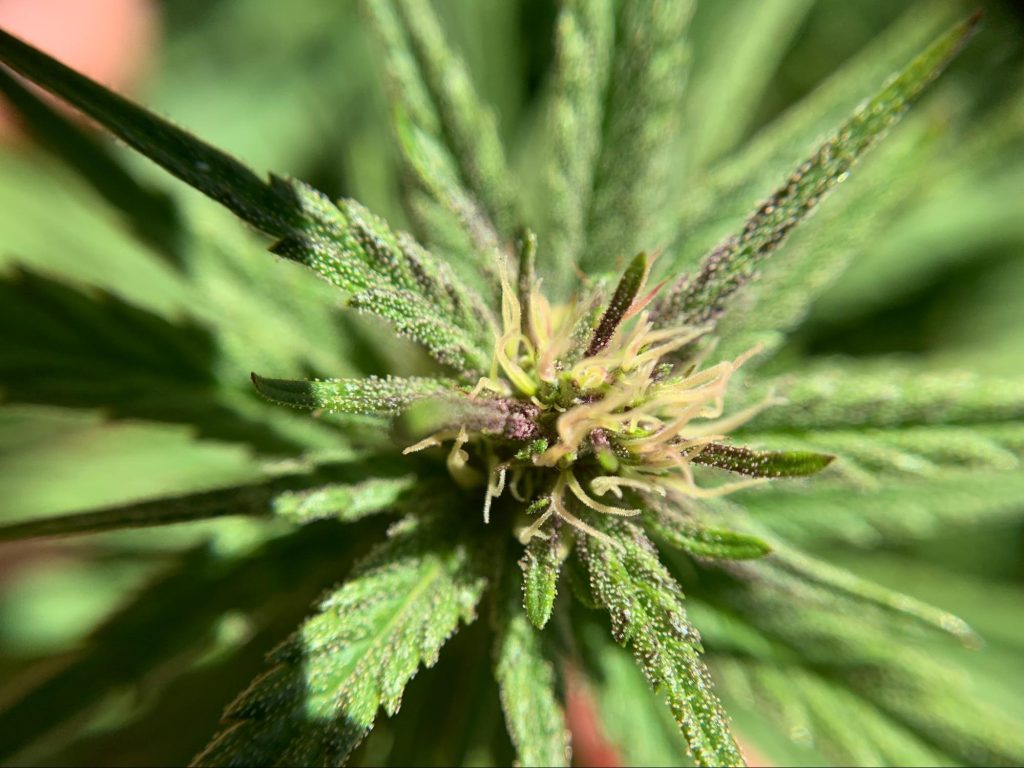 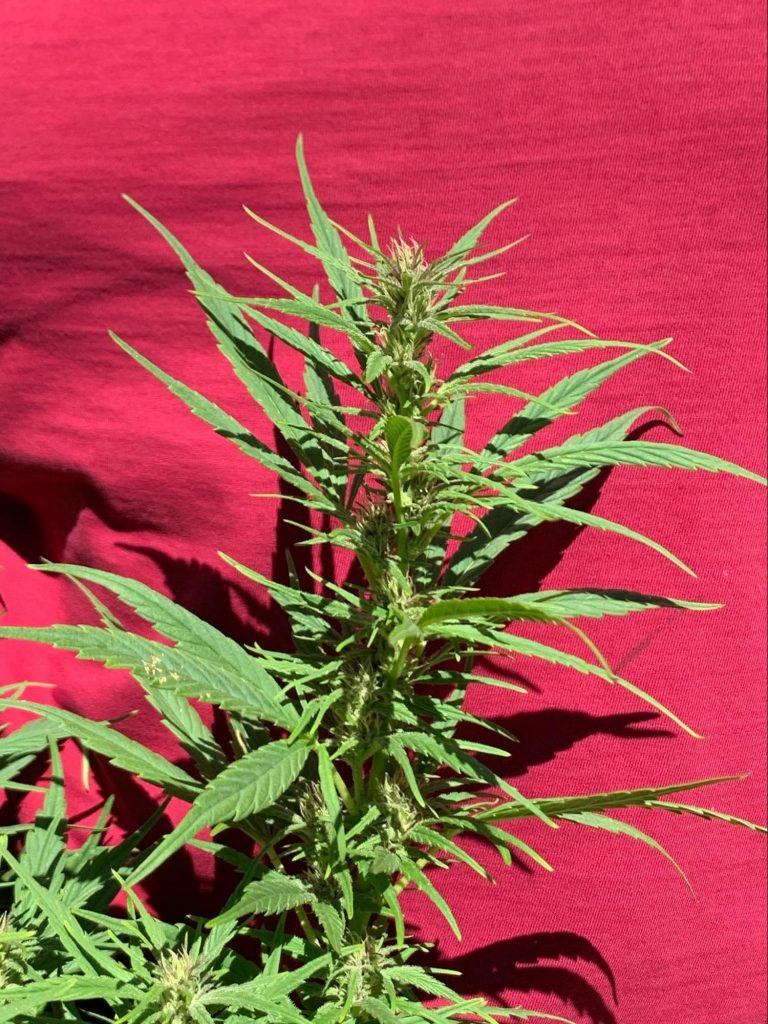 Shiatsu Kush, with a background of my tee shirt. 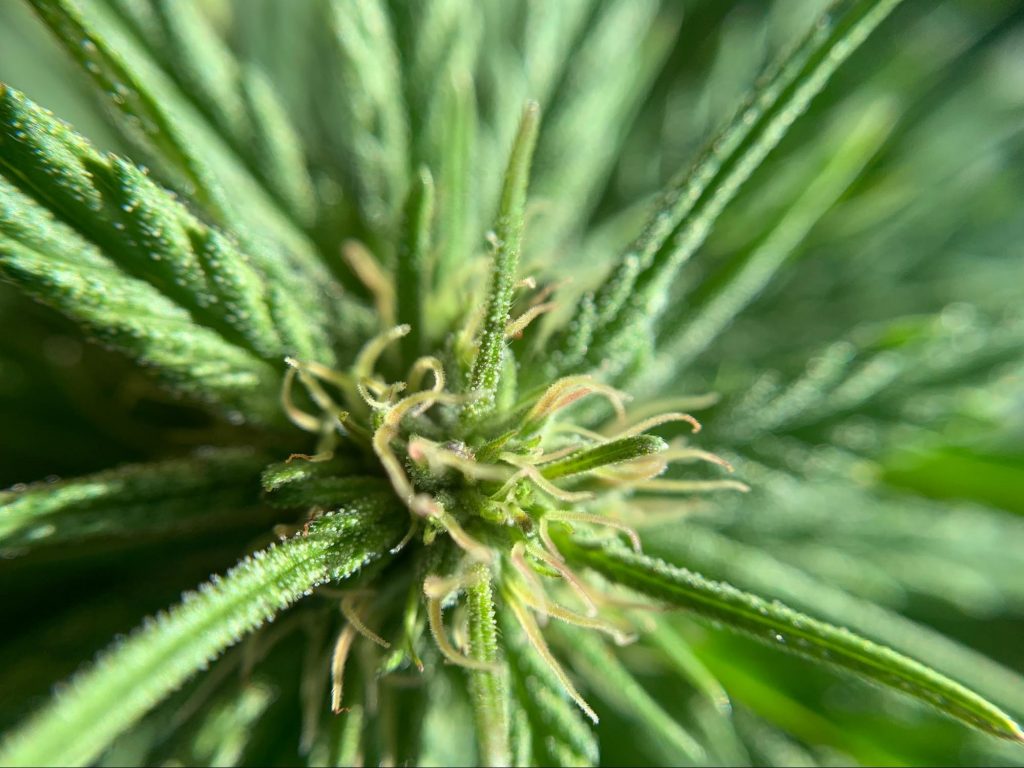 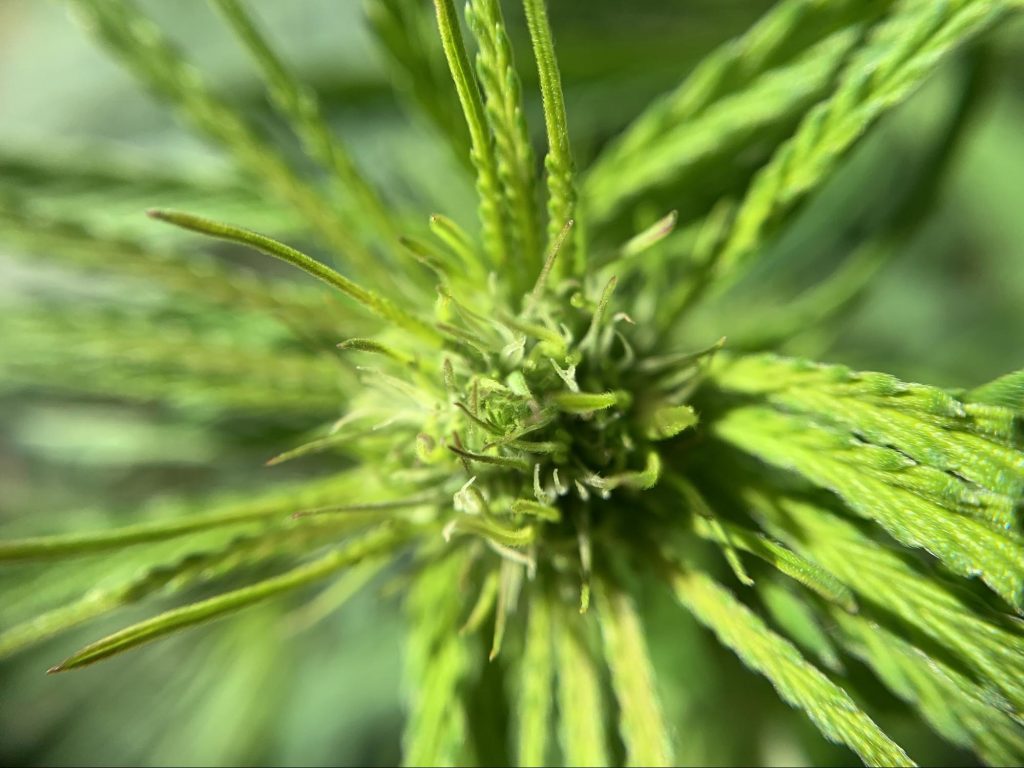 There are still a few in veg growing mode, taking full advantage of their training opportunity. Here you can see the advantage of planting RG 11 next to a bed with low growing vegetables. This one branch is extending well into the bed next door, allowing the inner growth on that branch to get full access to the sun. At the same time, this one branch does not have much impact on a bed with mostly carrots growing. 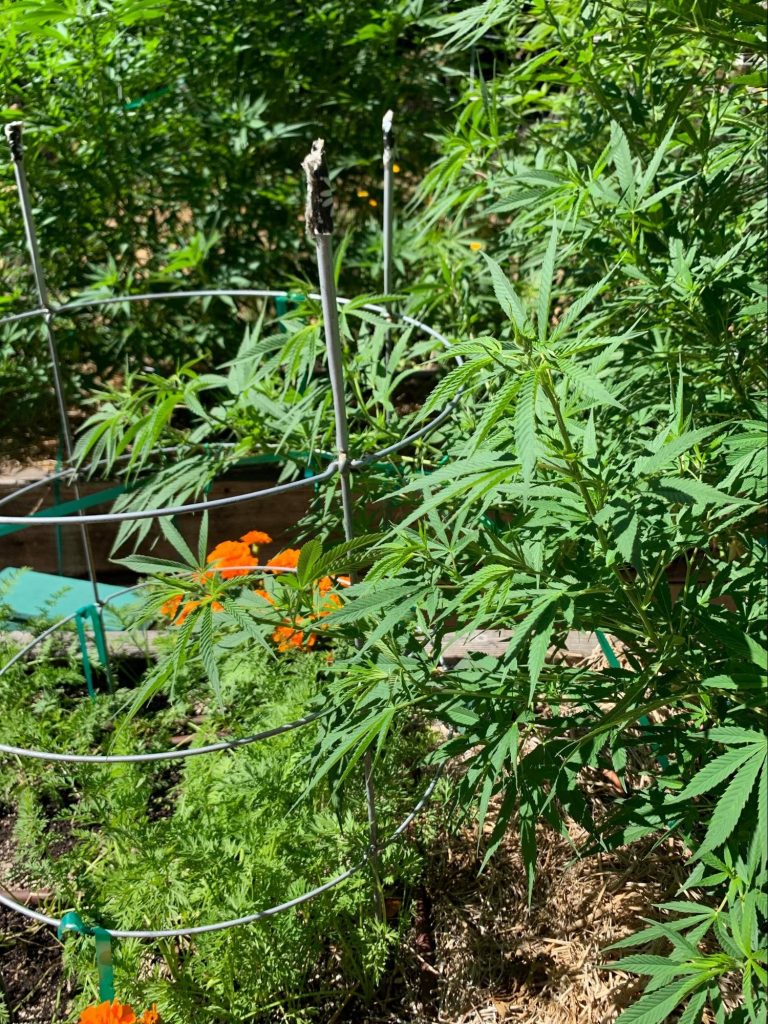 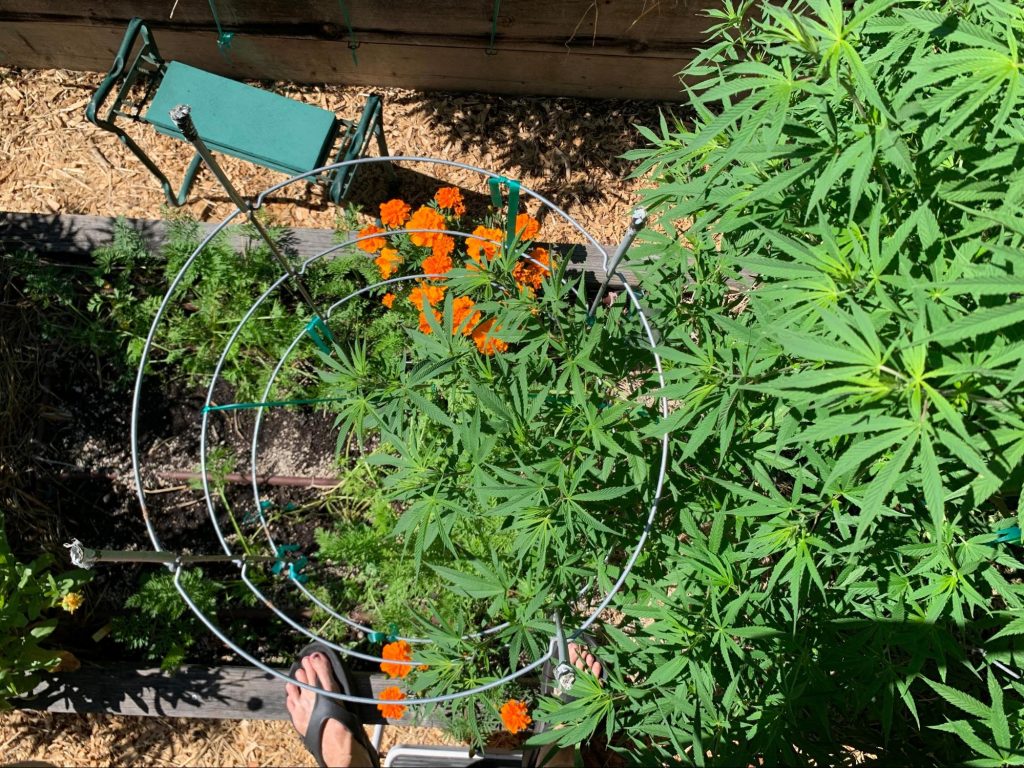 Here is the very special, late to the party ACDC 7, which is displaying her largely untapped potential (due to early flowering attempts), with vigorous veg growth, though I can say she is now beginning to flower. She’ll continue to grow and develop. I’m certain she’ll produce great medicine. But I already know that I’ll view this plant as a missed opportunity. This was a grower that was not allowed the chance. It will remain fascinating to watch her flowering process. She’s going to produce some beauties. 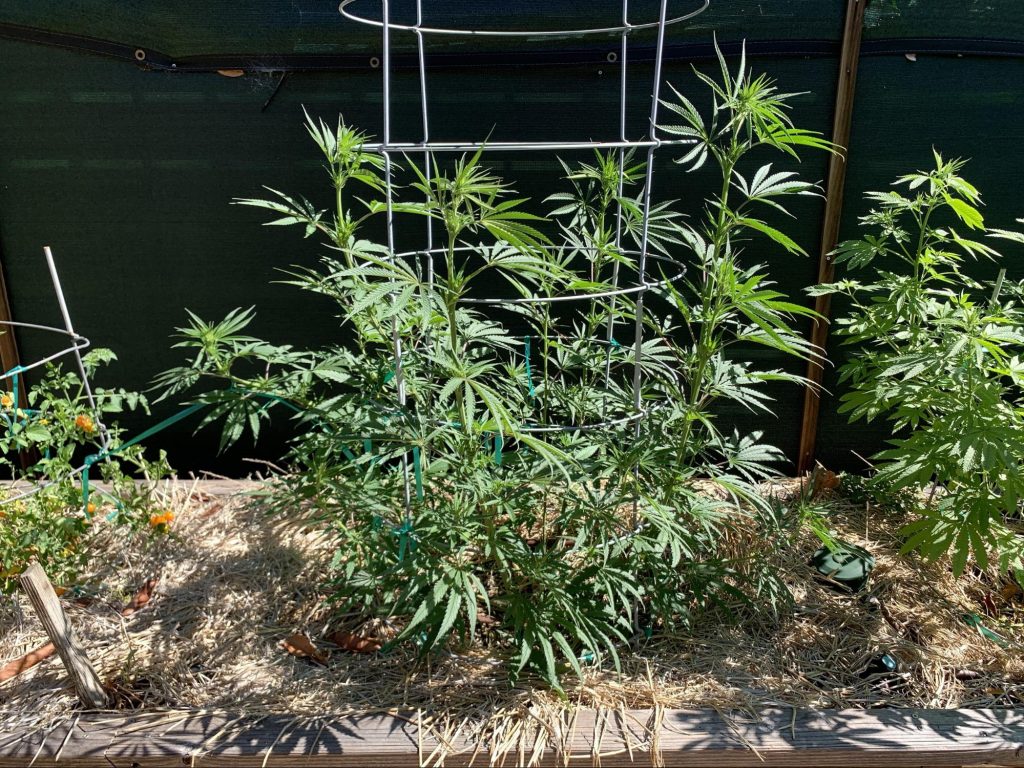 We are running out of room on every side of RK 18. She will soon become impassable. Clearly, this plant would have benefited from having an empty bed to train into. Her rate of growth seems to be slowing, which is the first sign of a plant beginning to transition. But she’s still a couple of weeks away from starting her flowering cycle. 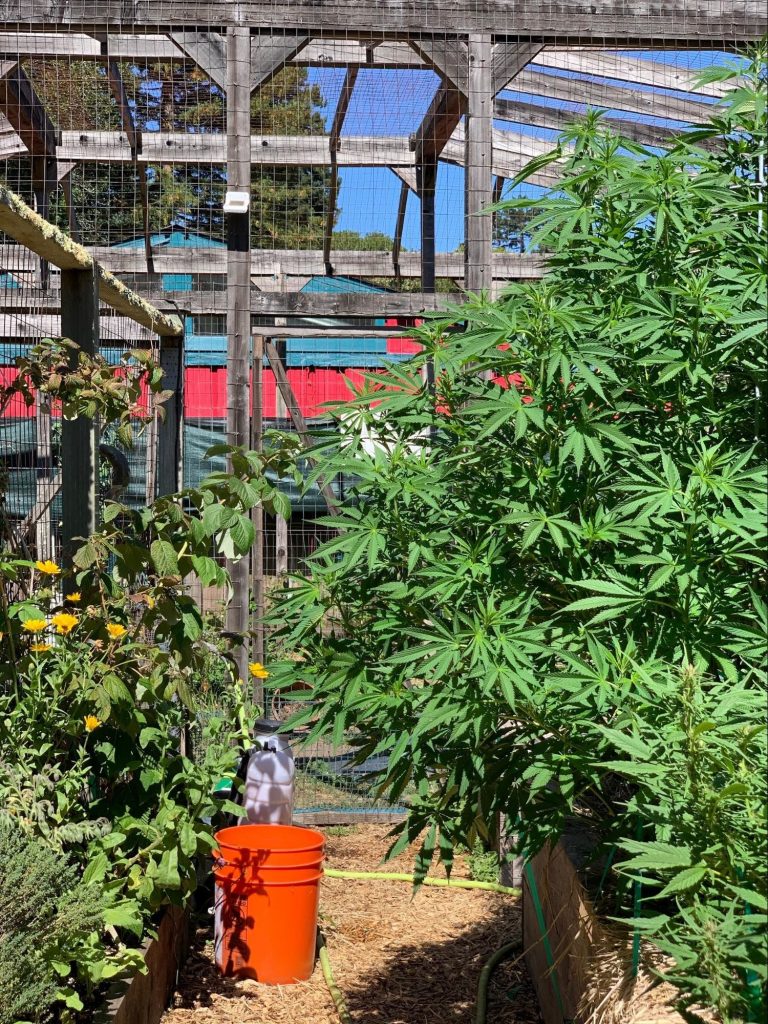 She’s blocking ¾ of the aisle. Soon, I will not be able to pass her.

This is a special date on the calendar every year. Some years are more special than others and this is not one of those years. The truly special years are when August 12 falls on a moonless, or almost moonless night. Because tonight is the peak of the Perseid Meteor shower, an annual event that generally provides the most shooting stars of any night annually.

We have spent more than one night under the uniquely beautiful sky in our little part of the world. We are at sea level, so we don’t get the kind of proximity to the stars you get in the mountains or high desert. But because we are over 20 miles from the nearest stop light, and because of the southern hill line that sports tall trees shading my plants, we also get a topographic shield from ambient light in the rest of the county. Sitting against this hill, and looking straight up, we are blocked from the light that typically obscures many shooting stars from naked sight. The Milky Way spreads over us like a vast cloud. For sea level, we get quite a show.

The Perseids are typically the largest meteor shower, but not always. Any meteor shower you can witness on a moonless night will provide more shooters than on a night with a visible moon.

In our 22 years here, there have been four moonless nights for the peak of the shower. Two of those were blocked by a thick marine layer. One of those times, we were able to jump in the car and drive up a hill until getting above the fog. That was an awesome show.

Two nights, we’ve been able to stay up all night at home, watch, and count. Our top Persied tally was 614 shooting stars in one night.

In November of 2002, we stayed up for a rare celestial event, the Leonid Meteor Storm. This was not expected to be as intense as the famous 1966 storm, but it sounded like something we did not want to miss.

It was around 1:00 a.m., on the morning of November 18 when the storm began. It was 42 degrees, so a good down jacket and a hat were all we needed to stay warm. It started with a pair, and then, another pair in about a minute. Within five minutes, it was a challenge to keep count.

We had a video camera outside with us, but it could not pick up the shooters. It did, however, record us while we comically attempted to count. It was not an entirely accurate tally, and we could not help but miss many. Shooting stars were everywhere; including places we could not see. My semi-shouted, faux broadcaster counting out loud was the source of hysterical laughter, and I’m certain we missed hundreds more than we saw. Karen was even on the phone with someone nearby and they were talking when we all witnessed shooters that formed an H in the night sky.

We could hear a few other hardy souls around our valley exclaiming, shrieking and applauding, while shooting stars blazed away, virtually non-stop.

There were eleven exploders, little specks of debris that hit the atmosphere, and were consumed within a fireball. Each of the exploders showed a range of color in the star clustered sky, from yellow and orange to bright red. The last exploder was the most powerful fireball I’ve seen in a night sky. It literally burned from east to west across the entire visible sky, leaving a thick vapor trail that did not fully dissipate for over 30 minutes. It remained visible for several minutes beyond the end of the storm.

In total, we counted over 1,100 shooting stars in two hours. That’s how long the peak lasted. That’s an average of just over nine shooting stars every minute, about one every 6-7 seconds. That’s the most we’ve ever seen. If you read that link, you’ll know that what we saw was mild in comparison to what can happen on that date.

I’m sorry I can’t find the audio of us counting. I wish I could share a few seconds of that joyful, laughing, lunacy.

Last night, we had a late rising half moon, so when I went outside at 10:00, I knew there was a good chance of seeing a shooting star. It took about two minutes before I saw a nice, bright blazer with a brief tail. That was enough for me, and I turned in. Karen stayed up awhile and saw some more. Mostly, as she reported to me this morning, she sat and listened to all the sounds of night. It reminded her of when we first moved in, 22 years ago. We sat on the deck those first few nights after putting the kids to bed, and all we could do was whisper and giggle. We whispered because it was too quiet to talk aloud, and we giggled, because we could not stop being spooked by sounds in the trees, and moving through bushes. We felt like trespassers on our own land. It has taken us a long time to understand these sounds and not have our neck hair stand up. It’s still a rush to sit outside on a moonless night and attempt to identify what is taking place in the dark. I will never forget listening to owls hooting across the valley one time. There was a slight sound from just beneath and to the side of a coffee berry bush on the nearby hillside. It was nothing more than the rustle of a few leaves, but in this kind of quiet, that little critter might as well have downed a tree. Every owl eye in proximity was turned to that rustling.

What I heard next was the flapping of giant wings coming into our yard, followed by a short shrieking sound and a quick rustle of ground cover. Then, the flapping sounds again, as the owl took off and returned to its perch for a midnight snack of mole, vole, vermin or who knows what.

The other thing we both noticed last night was the temperature. It was 45 degrees (7.2 celsius). I’m not a big fan of temperatures that chilly in August, but it is a reminder that Autumn is coming. Nighttime temperatures will begin dipping into the 40’s on a regular basis. As we get into October, the month with the greatest number of plants to harvest, overnight temps will drop into the upper 30’s. You have to keep an eye on super low temperatures. Freezing temps mean freezing trichomes, and they will fall off. Freezing means harvesting immediately.

However, temps in the 40’s mean something else to me. They mean the start of changing cannabis colors. One of my favorite sights, and one I’ve only discovered since I became a cannabis grower, is when green fan leaves turn purple in the fall. 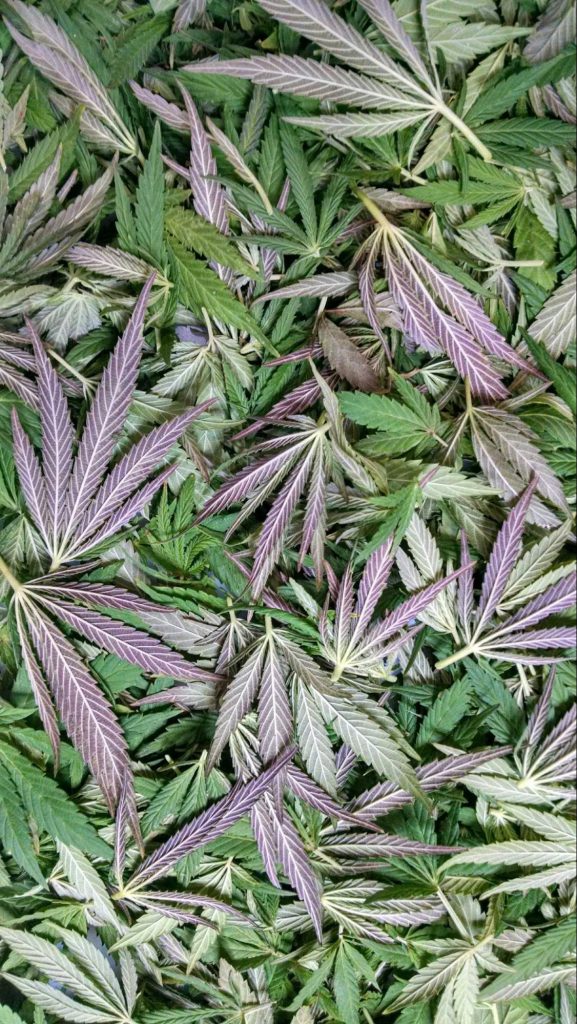 It will be very warm today. Bee might be by and we will be looking closely for more flowering plants. It’s looking possible that everything remaining in our beds will turn to flowering before the end of this month. Knock on wood.

See you next week. I’m feeling a lot of hope today in America. Survive and vote. 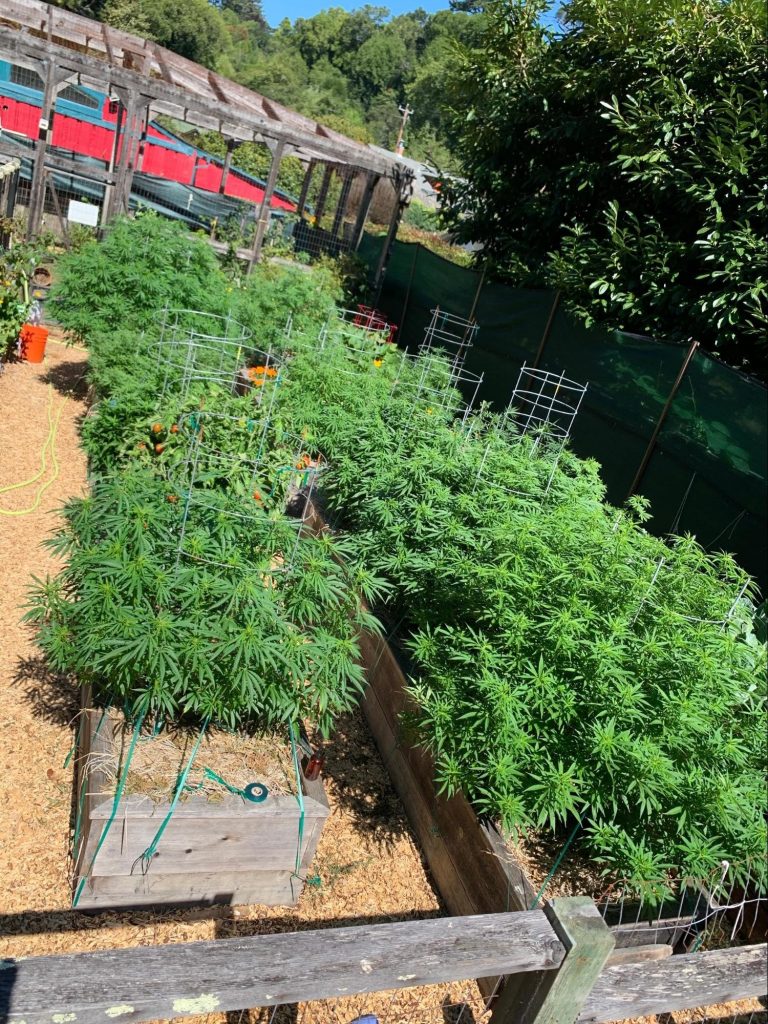