It’s officially summer when I break out the two tablespoon spoon. It’s what I use for foliar sprays and I could not find it. It was buried in a box of stuff about to be tossed. It takes two tablespoons of Regalia per gallon, and this morning, every plant in the beds, cannabis and food, got sprayed. I have seen no sign of powdery mildew yet, but I know it’s coming. Spraying young plants is an excellent way to begin building their immunities before the humidity and pathogen onslaught. Perhaps more importantly, when the plants are still young, it’s easier to access the soil beneath and around the plant. The sprayed plant drips into the soil, of course, but I spray the soil as well. Remember, pathogens live in the soil, so spraying there makes sense. It took two gallons today.

I have alluded to being a weather nerd, and summer is where I pay particular attention to any long range forecast of sustained, increased humidity. Knowing in advance, to whatever degree the forecast is accurate, helps me prepare, and prevents me from being blindsided. In the Pathogens blog, I detailed how we covered the beds with a tarp after I saw we were five days from heavy rain.

Four days ago, I noticed the forecast predicted fog this morning, and the prediction held. It’s still foggy this morning at 8:19, and I’ve already finished the first Regalia foliar spray, watered all the plants, and poured compost tea, all in the overcast. The sun will break through in about an hour, but that merciful cloud covering allows me to get my work completed early, and not in the dark. I’ve never been growled at in the daylight.

If I know a period of high humidity is on the horizon, I can mentally prepare myself for what’s coming: day after day of spraying and meticulous inspection, with ample pruning. There are days in August and September where it’s a bit like hand to hand combat out there. You know there are pathogens lurking, potential mold developing, and every single day becomes one long inspection until harvest.

So it is essential for me to know both the current conditions, in the beds when we have plants, and in the cottage when plants are either growing or drying. To be ignorant of the weather while growing is to do a great disservice to your plants and their potential as medicine.

We briefly interrupt this blog to bring the following announcement:

I’m already pumped for next year’s grow. Wish I got these a couple of months ago.

This is my father, Howard “Red” Hickey. He was the head coach of the San Francisco 49ers from 1959-1963. He invented the shotgun formation. He was also a veteran of World War II. He was a chief talent scout for the Dallas Cowboys for over 20 years, and won 2 Super Bowl rings with them. When he retired, however, he was a 49er fan for the rest of his life. Btw, Dad was known as “Red” Hickey, because he used to have red hair. From Hickeytown, Arkansas. Not making that up. You can Google it. I’ve been there. My Dad’s nickname helped me develop my sense of humor, and self defense, at an early age. 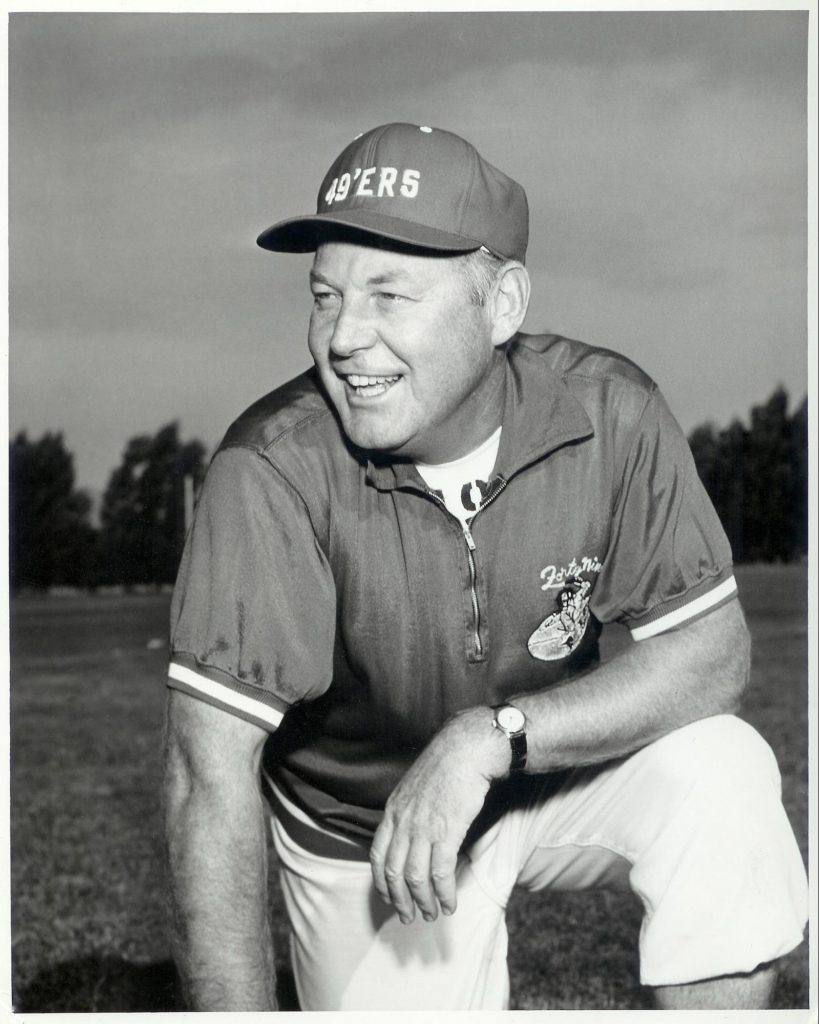 This is a very cool shot Brenden took yesterday. It shows exactly where the sun line is in relation to our beds. It also shows some of the trees lining the hill to our south. This is Solstice. This is our growing window at it’s most wide open. This photo clearly shows how narrow our window is to grow. Still, we persist.

A few words about yesterday’s tea: I’ve mentioned not using any more liquid fertilizer until the end of July, or first week of August. The way the plants are now growing, they need nothing more from me than both complex and simple sugars. They are getting everything else they need from water and soil. This is the year I’m actually seeing the benefits from the soil work. I’m not adding a cup of fertilizer to teas, to make sure. Years of fish and compost tea have turned our beds into active and healthy growing mediums.

Ok, so while I was pruning inner/lower growth from the most developed plants, Brenden was allowing fresh eyes to begin the training process on several more plants. Their eyes always see things I never see. Part of that comes from my being around all the time, while Brenden sees them about once a week. Brenden has always had an eye. They notice bugs, abnormalities in the plants, and especially, worms and mold. They have a gift for spotting worms. Today, four were spotted and dealt with on the Ringo’s Gift that attempted to flower. I will probably either purchase, or mix a small batch of BT to keep on hand for spot spraying. Historically, we have learned to pay close attention to plants that prove to be attractive to worms. 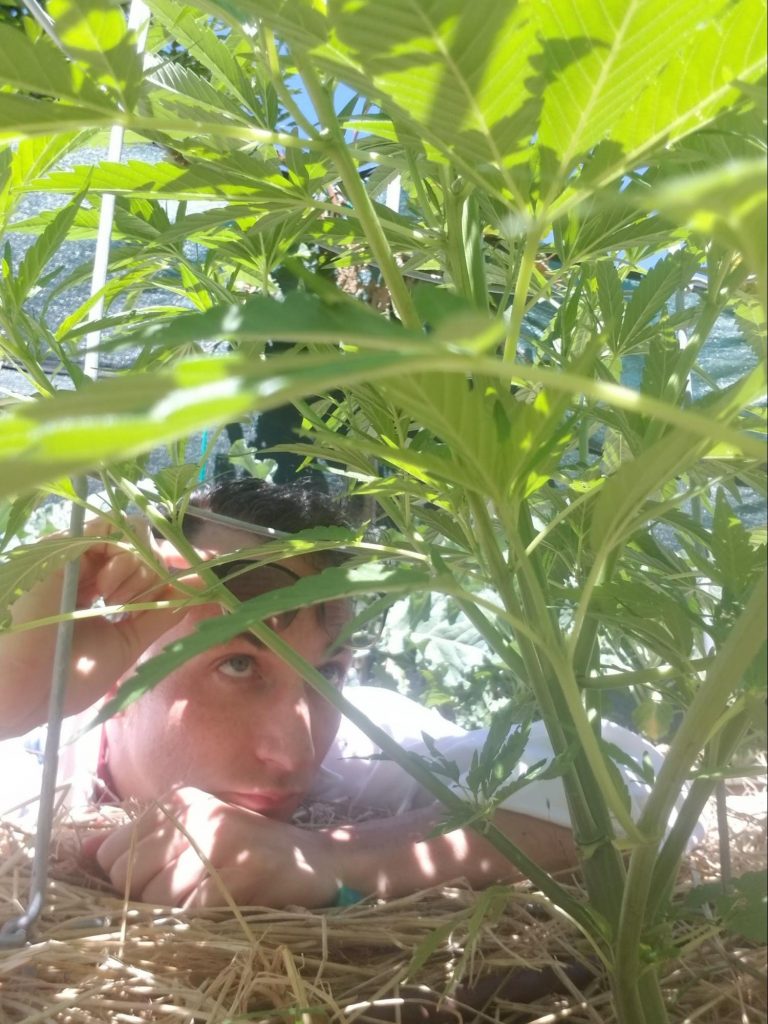 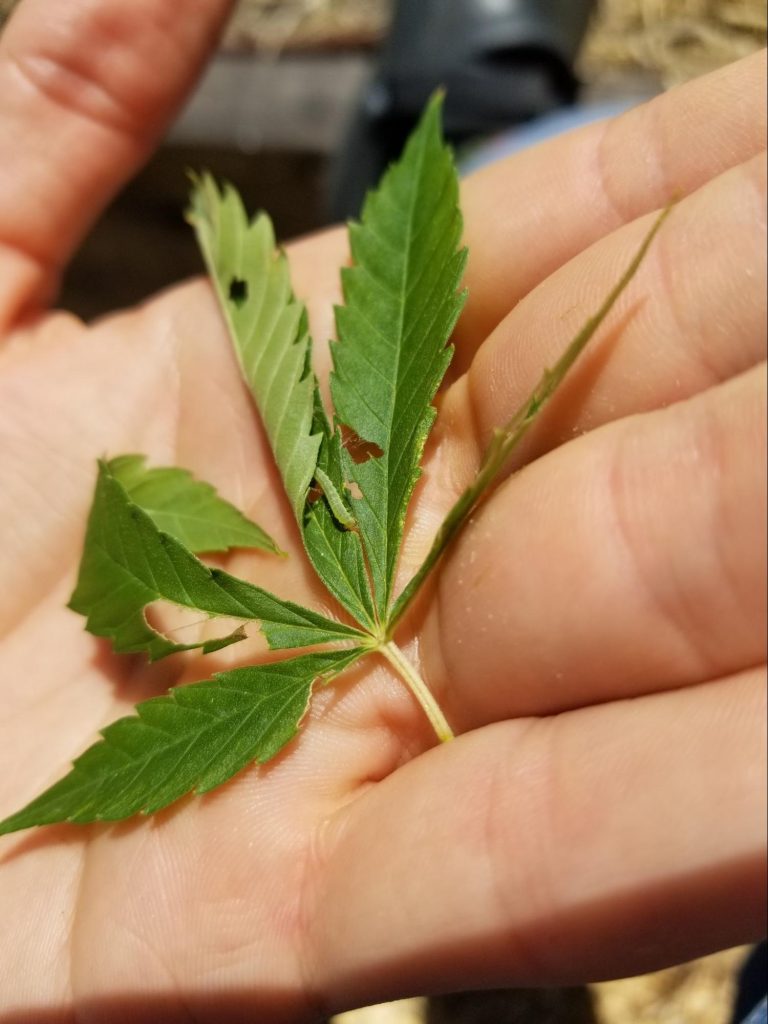 These worms are a plague. We find them inside cannabis leaves folded in half by silt. A worm remains inside and happily chews on the leaf. The leaf damage is insignificant. The real damage is caused by leftover scat when the worm leaves. The scat eventually can mold. If that mold finds its way inside a flower, that portion of the flower must be removed. If it gets inside the plant, the mold can become systemic. This is why we proactively spray BT on our plants. Seeing persistent worm activity on that one plant calls for a solution. I’ll prepare a smaller (one gallon) foliar sprayer with BT and simply keep it close by for spot spraying. The worm situation must be aggressively contained.

More plants were trained yesterday. We noticed Sour Tsunami has a slight lean that we think is a response to the recent days of heavy wind. She might also be leaning as she tries to move toward obscured early morning light. Brenden actually took the new growth from where I topped her weeks ago, and has spread those tops far apart, which had the impact of spreading apart the entire top of the plant.

As described, low leaves were removed, and much more aggressive pruning has begun. It is plain to see the basic training and pruning that has been done to our fastest growing plant, CBD God. We are clearing space and allowing air into the center of the plant. It is likely that some of the lowest visible growth will eventually have to be pruned for the larger potential flowers. There is now much more room for air to circulate and keep this plant dry. We will be training and pruning this plant the entire growing season. 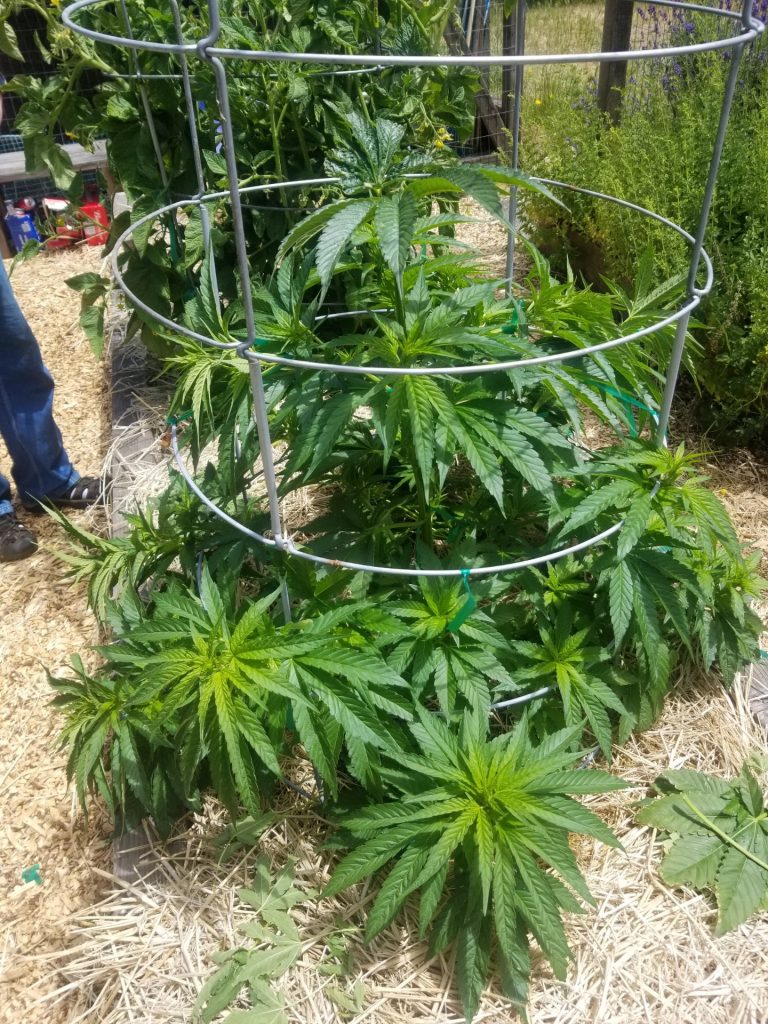 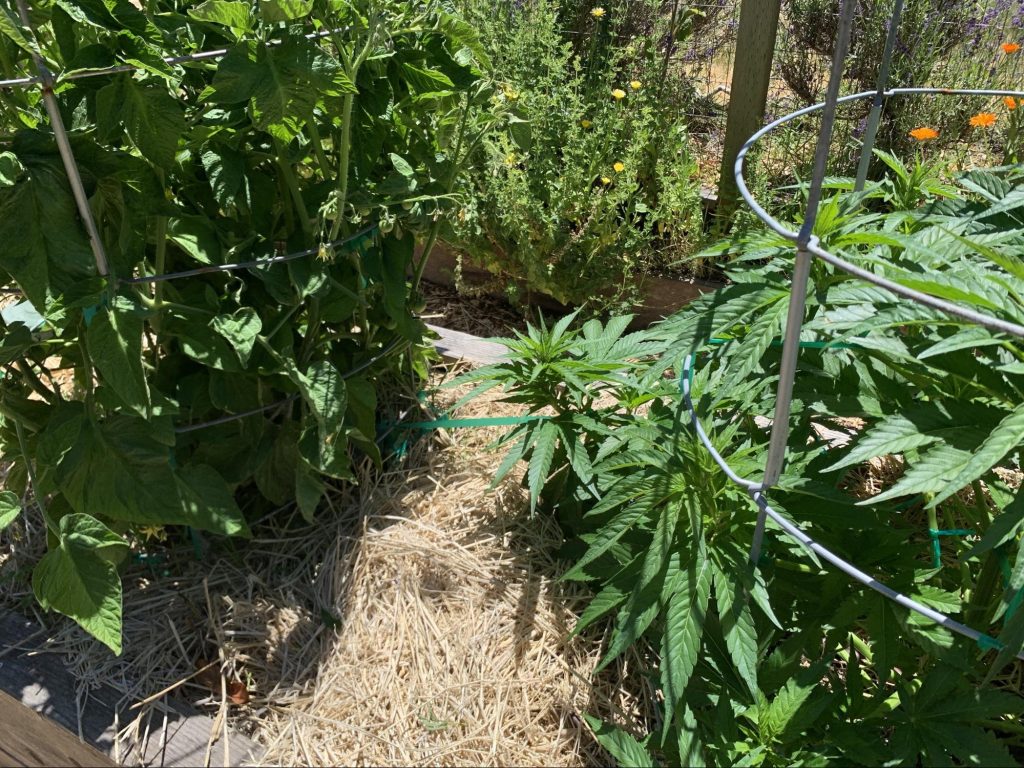 One more train of note I want to show is the long train along the ground, leading from CBD God toward the Stupice heirloom tomato plant growing incredibly well in the next bed. Note how the plant tape is tied to the bottom of the tomato cage, to stretch out this branch. This was virtually against the ground yesterday. We understand this branch is very close to the tomato. But we expected this to abruptly turn upward, which it is doing, searching for the sun. I will continue to prune that side of the tomato, to limit plant interaction. A note about the stupice: This is a Czechoslovakian heirloom, known for blooming early, and also for ease of growing along the west coast, all the way up into British Columbia. The early bloom is why it is planted between two cannabis plants. It is going to fruit right now, while cannabis is still many weeks from beginning to flower. The fruit of this tomato plant will be eaten, and the plant taken apart piece by piece throughout the summer. Having grown tomatoes a lot, I am fully aware of how quickly mold spores form on old, unwatered tomato plants. (I stop watering tomato plants full of fruit, because that is how you grow sweet tomatoes) I will be removing sections of this plant as we go, and the entire thing will be removed in a plastic bag before mold forms. At that point, the two cannabis plants on either side will be able to utilize the tomato cage for training.

Bubba God got the same aggressive training treatment, as did Shiatsu Kush.

Btw, from now on, when I refer to cultivars that have multiple plants growing, I’ll refer to them as we do while we’re working: By cultivar abbreviation and bed number. The two Rainbow Kush plants will be RK 16 and RK 18 respectively. Ringo’s Gift are now RG 5 and RG 11, rather than referring to a plant as the one that tried to flower early.

So–RG 5 is where the most worms were found, and also where veg growth has resumed with a vengeance. Here is what is so cool about that plant resuming veg growth: She doesn’t get her first direct sunlight until almost 10:00 in the morning. It’s no wonder she tried to flower. But she is 1/3 ruderalis, with an auto flower response. From experience, I know we can grow ruderalis like plants in that row of beds. Shade or no shade, when they make up their minds (or are pushed) into veg growth, the plant will grow until it decides to flower, shade be damned. It’s important to remember that ruderalis had its origin in the wild. Obviously, knowledge for something like this can only come from experience. We’ve seen this before.

Stay safe, folks. Back with a blog on Friday.