Here you can see a friendly bumblebee making its way around the new lavender that has grown since Karen harvested a bunch several weeks ago.

We are having our first 100 degree day (37.7C), with only 17% humidity. Weather like this is good for two things: 1) Killing all powdery mildew.  2) Seeing if the moisture in the ground soil is enough to keep the plants from any stress. So far, my suspicion that all my plants have tapped into ground water appears to be accurate. I see no stress in any cannabis plant from this heat. In fact, given that this level of heat will not maintain more than a day or two, I’m pretty sure I’ll be able to cut off all flowering plants from water a full month before they harvest.

To that end, tomorrow will be the last water Shiatsu Kush receives. She’ll get two more teas after tomorrow, and then nothing else until we bring her down. It is during the last month of flowering that we’ll see the greatest insect activity on this plant. It won’t be long before we’re using the long handled tweezers to pluck dead gnats from flowers.

It would not surprise me to find quail out there sometime this afternoon, basking under a cannabis canopy.

RG 5 is now flowering. That makes seven plants flowering, with several more poised to turn. I expect RK 16 and the White Widow to turn over the next 2-3 days. It’s looking more likely that the last plant in the beds will be the largest, RK 18. Looking forward to harvesting Shiatsu Kush in only a few weeks. That will give us a free bed and cage to train into for RK 18.

ACDC 22 is still with us, and flowering proceeds with all due speed. I cut a few more fan leaves off yesterday, and the tops still look vibrant. This plant is going to be touch and go all the way to harvest. If we bring her in without any systemic mold, I’ll be surprised and very, very happy. She’s going to produce quite a few flowers, and Karen agrees with me after inspection, that the flowers are worth fighting for.

At the end of the blog, Trouble in 22, I alluded to ACDC 17, the most ruderalis like cannabis I’ve grown. This was the plant that inspired someone at Oaksterdam to recommend SEA-90. It looked scrawny, with strange, clustered bursts of growth. Leaves coming out like thin line drawings with almost microscopic binding. It definitely had a “send that plant to camp” vibe. It needed help.

Bee commented honestly, “I am not impressed.” 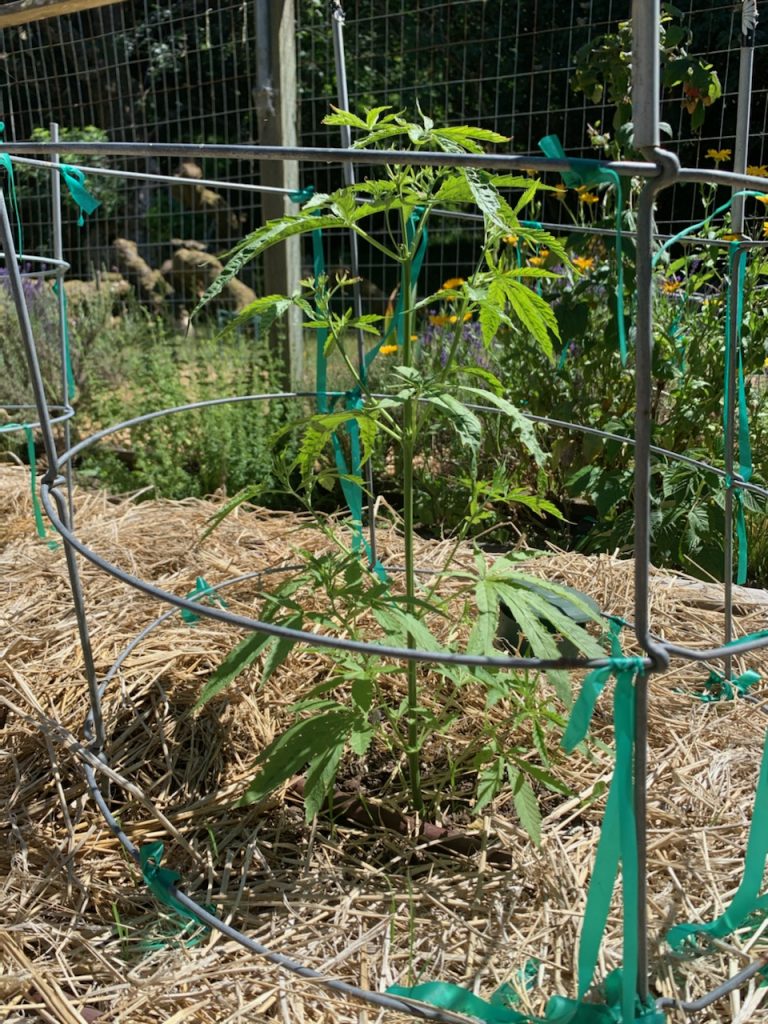 Not more than two weeks ago, we faced some tough choices. RK 18 was clearly infringing on ACDC 17, and needed the space, damnit. Bee discussed with me and I agreed. They made some cuts on weaker branches largely in the shade of the monstrously expanding kush next door. They were branches that were never going to get the kind light and space they needed to grow and flower properly. By keeping them, we’d be taking energy from more worthy flowers. I agreed completely with Bee’s cuts. It made the plant an even odder shape, but as a partially wild plant, she seems to have far less ego than some of the more famous cultivars nearby. 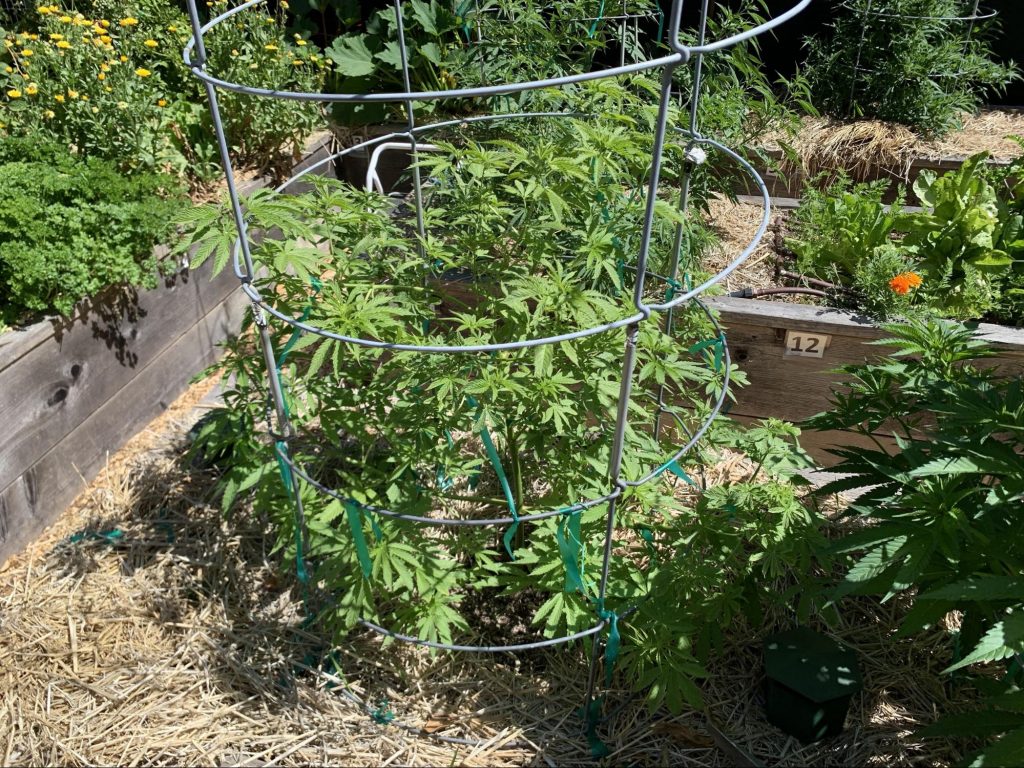 Those cuts would serve another purpose, we hoped. By taking off the sheltered branches, we hoped this ruderalis would get a burst of growth for the tops, propelling it from the shadow of her neighbor, and giving herself the best opportunity for great medicine. We hoped she would grow straight up, and west, toward the setting sun.

When the cuts were made, the top branches were not even at eye level. The entire plant seemed mired in mediocre growth. You take what you get, I thought.

Well, that was two weeks ago, and this is today:

She has sprinted up and mostly west, away from the kush and into sunlight on her own terms. It had taken until those cuts before this somewhat wild example of cannabis found her footing. Also, because she grows on the other side of the largest plant in the beds, this growth has happened somewhat clandestinely.

The tallest stalk is growing at such a rate, that one stalk may end up being the tallest in the beds this year. She’s still behind several top stalks of RK 18, but she is gaining fast. However, the ACDC is now flowering, and RK 18 is still vegging. Too close to predict.

RK 16 is now flowering. They are starting to fall like dominoes, and flowering is definitely in the air. I expect the White Widow to turn any moment. Same with Bubba God.

And . . . ACDC 8 is now flowering. She resembles ACDC 17, but never really got any giddyup in growth. I think she is a product of too little light in the morning.  That said, she is ironically getting more light now than she did when we put her in the beds. This is all due to the growth of trees around us, and we’ll attempt to rectify the light issue after harvest with some careful cuts.

This makes all four ACDC now flowering. Given they are all auto flowers, it is not surprising they turned within a couple days of each other.

This also means no plants to harvest in November, unless RK 18 extends that long. RG 11 will turn within a week at most. The giant kush could wait until September, but I doubt it. I do think she’ll be the last plant to start flowering and she’ll come down closer to Halloween. We’ll see how it plays out.

This much is now certain: October is going to be busy, and October is not far off.

How lovely! We just got a RED FLAG WARNING for the entire bay area, from 11:00 pm tonight to 11:00 am tomorrow morning. Lighting is possible. So . . . we won’t be sleeping very well tonight.

There are few things like an old fashioned, electrical storm. 4:00 in the morning is when it hit, and it’s still going on an hour later. Kinda freaky outside. Not joking. The whole house is shaking from thunder that does not quite stop. It just rolls into the next. For anyone out there reading this that knows me, you know I’m in my element. I’m a weather nerd. Events like this wake me up and send me outside, under the explosive sky.

One thing is certain: With an overnight low of 67℉ (19.4℃), the plants did not take the night off from growing. This is the kind of heat that growers east of me routinely get over the summer. When I refer to “sprinting” plants, that largely happens for me during the day. But growers in warmer parts of the state talk about nights when their plants grow inches. The last two nights have been such nights here, with the added bonus of a brief, but thorough splash of pH neutral water. Today will be an explosive day of growth in the beds. Rain or no rain, I’ll be out there spraying in less than an hour. The lightning proceeds. The Red Flag Warning is still in effect for about another six hours.

A first for me: A foliar spray during an electrical storm. The worst is currently east and north of us, though still visible and audible while I sprayed. It’s clear overhead. I remember the smell of summer storms from my youth. It is invigorating and I am compelled to be amidst the moment.

There is something deeply connective to be outside at 6:15 in the morning in a tee-shirt and sweats rolled up to my knees (thankfully no pictures), spraying my crop. I feel that link with other farmers, and it doesn’t matter what you grow when you’re outside working in pre-dawn while a thunderstorm rolls by just north. Every time I turned in the direction of the front, there was more lightning, followed by waves of rolling thunder. The ground shook and plants trembled. Despite this cacophony, it was otherwise still. There was mercifully no wind. There was just a slow rumble that started in the sky but soon covered the ground. I wonder how many storms like this our ancient buckeye tree has seen. True electrical storms are not common on the west coast.

I was walking in as the barely risen sun peeked through a crack in the clouds to the east. Lightning was still visible, thunder was still audible, and our ducks remained inside their house even after I opened their door. They might have the right idea.

And . . . the White Widow is now flowering. That makes eleven flowering plants.

For anyone curious about the rain and its impact on Shiatsu Kush, the month old flowering plant, the answer is that this rain, in this amount of about a quarter of an inch, is perfect for all the plants. It’s just a small sip, but it’s 7.0 water. Up to about half an inch, every plant will benefit. As I stood next to the flowering kush this morning, I stopped spraying, turned my head to the sky and opened my mouth. If it’s good for the plant, I want in on it.

Right now is a time of synchronicity in the beds. The flowering cycle has taken over. They all want to flower. The two holdouts will not maintain their indifference for long. The party is getting started. It’s time for the girls to start showing off.

Survive and vote. Back on Friday.