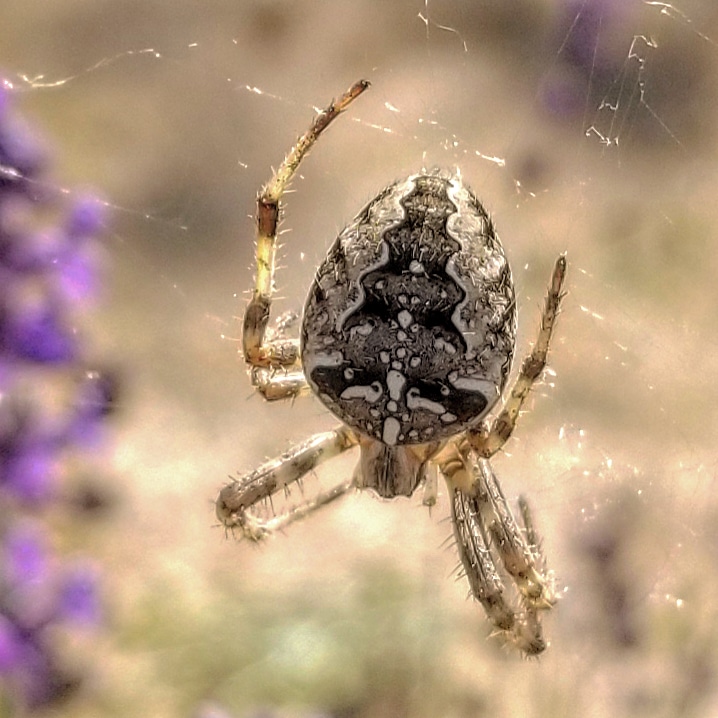 ​
This orb spider is big, bad and beautiful. Multiple kills are in its nest, waiting to be eaten.

After six consecutive mornings of Regalia sprays before dawn, today I slept in until 7:00. I needed the extra sleep, so I plan on spraying this evening around 5:00, once the plants are fully in shade, but still a couple of hours before sunset, so they’ll have some time to dry. This will be the last evening spray for the season. I only do this because of the rather extreme humidity circumstances.

Tomorrow morning, all but Sour Tsunami will get compost tea. All but the four ACDC plants will get water. But tomorrow will be the last water for every plant except RK 18 and RG 11. Those two will get one more week of water and tea.

After that, I’m done with compost tea and watering for most of the plants. They will derive moisture from diving deep into ground sources, or draining fan leaves until they are a brown crisp. I will resume compost teas after solarizing our beds.

Because of what I’ve witnessed this year in our stupice tomato plant, I am increasing the amount of time I starve my plants from water. When I see no mold yet on the tomato plant, with no compelling reason to remove her because of mold, I might be onto something. Going into this year, if you asked either Bee or me what our number one problem is, it is mold.

So I am cutting way back on water and tea in the final weeks. I used to give two weeks without water or tea, then three weeks. Now, it’s three weeks for tea and a full month for water. By using significantly less water on the tomato plant, we have virtually eliminated mold until frost hits. Shouldn’t the same hold true for cannabis flowers? The answer to that, of course, depends on many factors. In a high humidity situation, water is not the pathogen entrance to the plant. It’s usually a poor cut, an improper honey seal, no seal on a cut at all, or possibly debris from another plant that gets wet and molds. It could also be a worm scat that has gone bad. As with the tomato plant, I’m attempting to reduce the total amount of groundwater. By lowering that, I’m hoping to limit the fuel that feeds the mold. 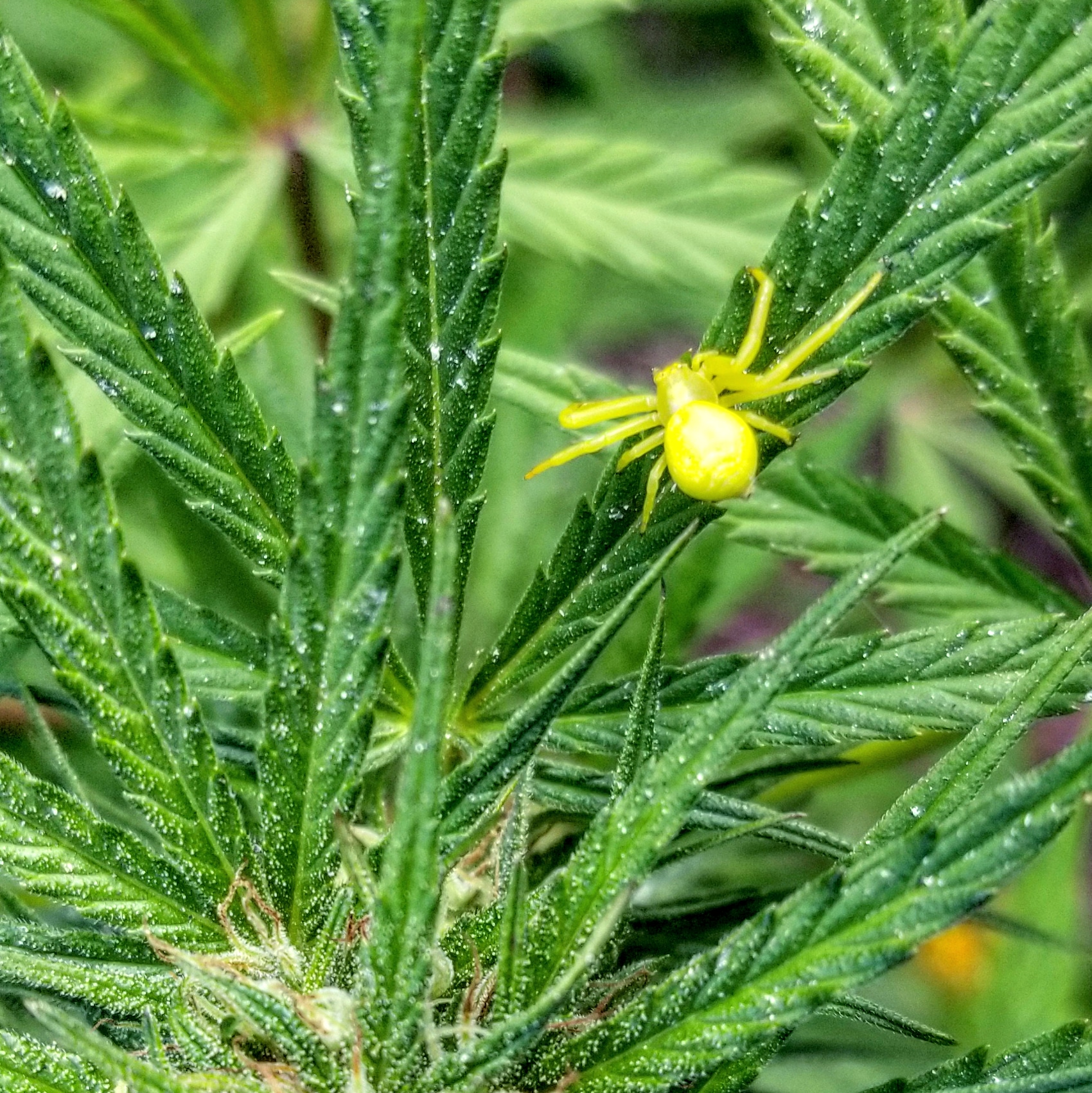 Busy day ahead, and a bit of a preview for the crunch to come. I’ll be going outside for a Regalia spray in about 20 minutes, then later this morning, Bee will arrive for trimming of Shiatsu Kush. I’m thankful this is not a big plant, so we can get our trimming chops up to speed. I gleefully admit that one of my favorite things about a trimming day is to sample what we’re going to trim just prior to starting. Makes the day a bit more festive. Homemade pizza will make it even better.

There can be a party air to a trimming day, even if the work involves hours of concentration. Good food, tunes, some uplifting samples to maintain energy and focus, and communal help in the process is soul satisfying. When trimming by yourself, however, it can be a carpal tunnel inducing drudgery of the highest order. This is the first plant to be brought into the house this year. She’ll remain here now, being burped, cured, and sampled for the next couple of months. This means we will begin our harvest yield tally today. This also means new mini-tins filled for the poo-poo platter. SK19-2020 will be initiated with fire today and trimmed to completion, including the capturing of kief.

Of course, while we’re trimming, or perhaps, after we’ve trimmed, a full crop inspection is due in the beds. We are walking a tightrope of high humidity. That appears to be changing in a few days, but until it does, it is a Red Alert Day for pathogens.

Ok, the sun isn’t up for 20 more minutes and it won’t start touching the tops of my plants for another hour. But enough light is out to begin the spray. You can probably tell that I don’t need much arm twisting to get outside in the pre-dawn. It’s pretty much bliss for me. I like to think the critters still up at that hour and I have a secret bond. Or maybe it’s just an acknowledgment between the night and morning crew. I get to witness the nocturnals with their last hurrahs before going to sleep, and I get the fledgling babies in nests squeaking and squawking at my presence, as they poke their parents and say, “See, see, he’s up, he’s up. Let’s go.”

Spraying is finished. Based on the last two sprays, I’d say this is the week we begin to construct supports for flowers. As I sprayed, the weight of the water was weighing flowers down, bending them toward the ground. They are still holding, but this bending is instructive. The flowers are getting heavy, probably heavier still because of the training that opened up each branch to the sun. In particular, It is the ruderalis that appears vulnerable, as I suspected early on. So after we trim and inspect, it will be time to construct, or at least troubleshoot and identify the particular flowers, or even regions of given plants, that might require some help in the near future.

But the next order of business today is to trim. Just before we get started, there’s one thing I must do: 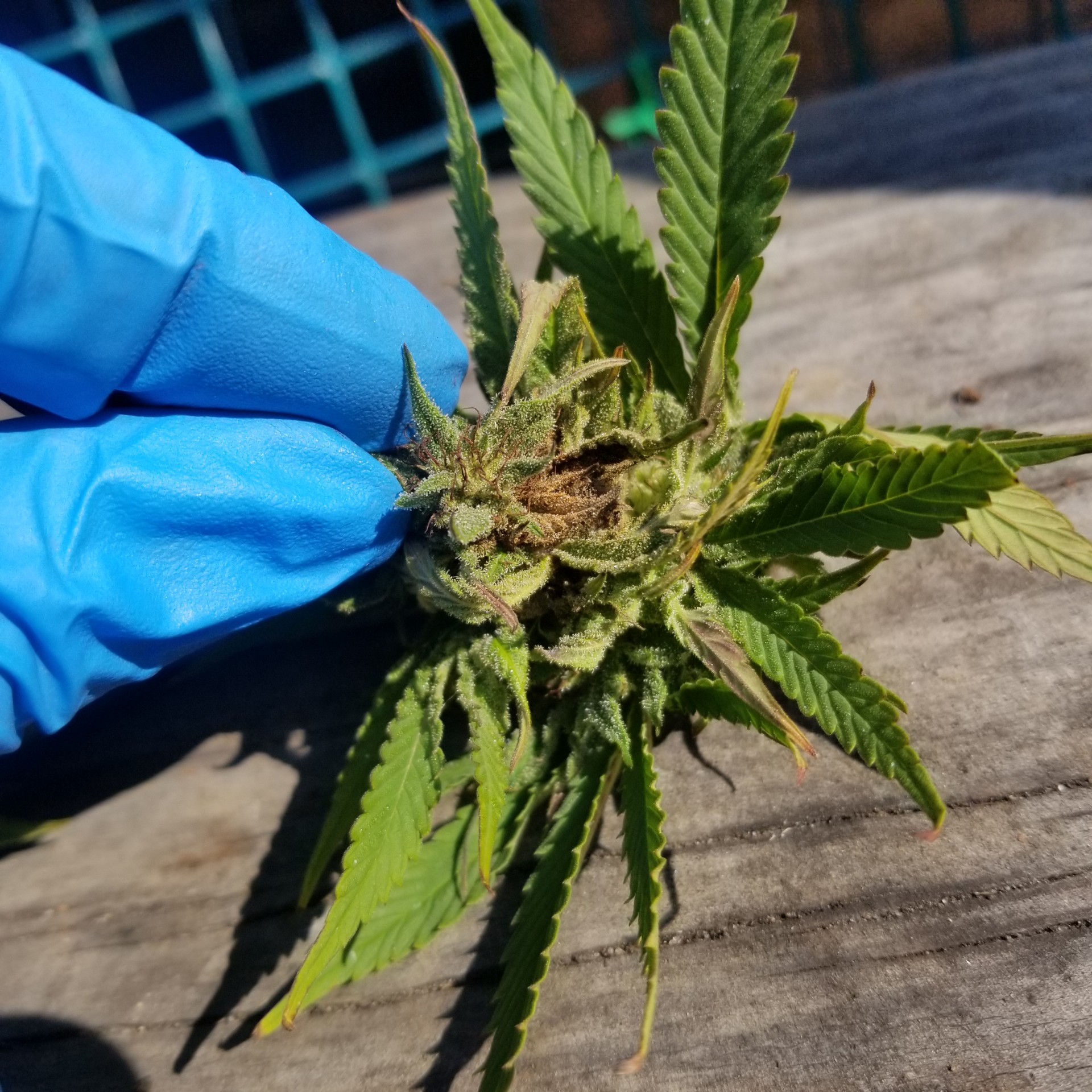 Going into seven straight days of high humidity (as it turned out), we knew there would be casualties out there. We could even predict with accuracy which plants would show problems. For example, tightly clustered plants, like CBD God. As hard as we fight, with daily foliar sprays and inspections, when humidity sticks around for a while, the weakness of your crop will be revealed. An entire CBD God flower was removed yesterday, and as near as we could determine, it was probably from a bad cut, or perhaps a leaf that was removed stripped down the side of the stalk enough to narrowly open a door for pathogens. It was not from a worm. In fact, there was barely evidence of worms yesterday, meaning that last BT spray was effective. We are looking at a few more days of higher sustained humidity, but by next weekend, the heat rises again, and humidity will plummet. That will be an excellent time to spray BT again. That will be the final BT spray of this season, I hope. 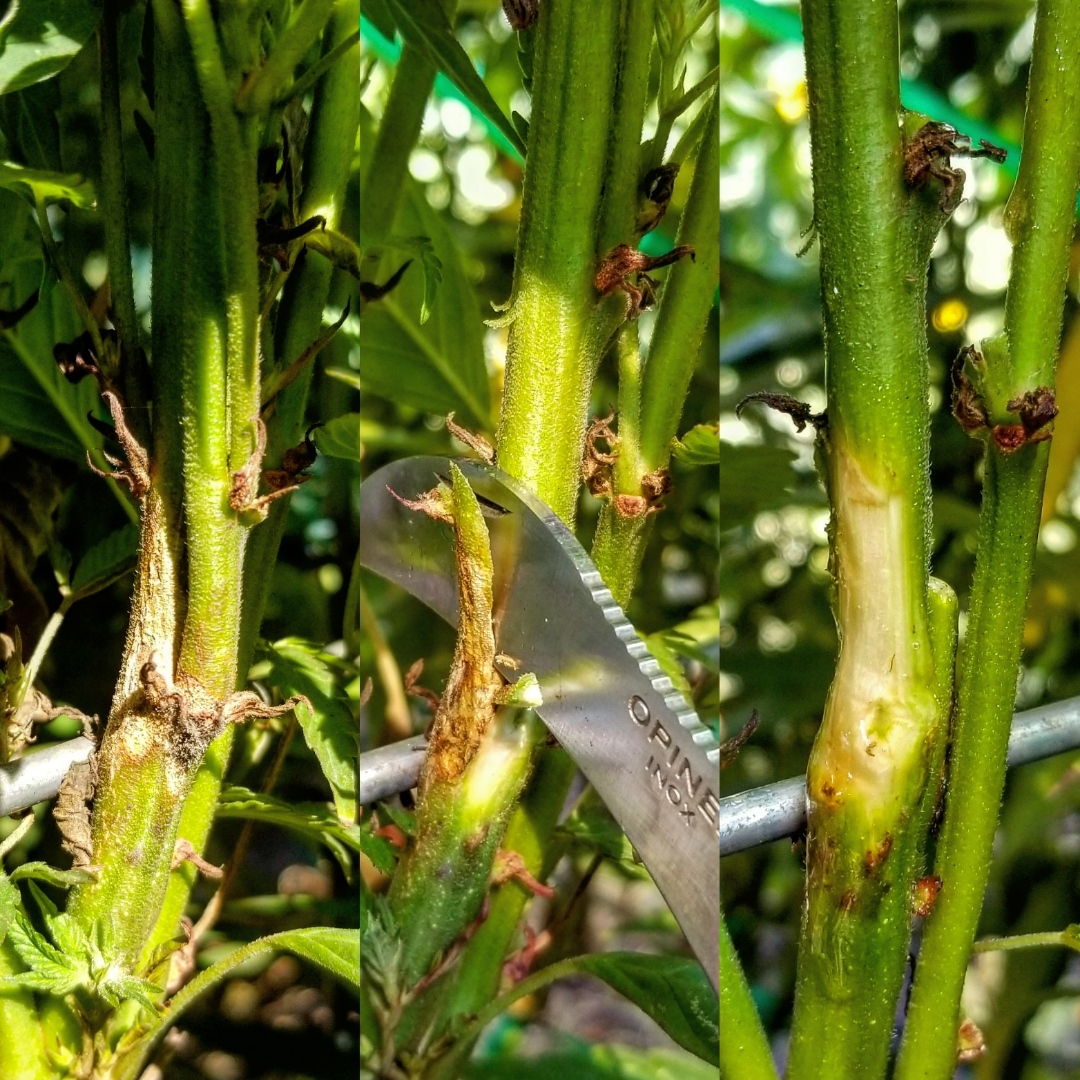 This triptic shows mold down the side of a branch, probably because of a stripped leaf. It shows the mold, the removal, and what it looked like after alcohol and honey applied. Notice this is against the cage, and well inside the inner growth of the plant. To spot and treat this, Bee had to practically climb inside the plant.

Right now, it’s days of hand to hand combat, pulling apart branches to check for mold on every single flower; especially the tighter clustered plants, and Sour Tsunami, which starts to come down in only a few days. I’ll probably spray every other day this week. After a week of daily sprays, powdery mildew has been mostly minimized.

It’s all about the mold now. About five weeks remaining with plants in the beds. Lots of sun in the forecast, and that’s good news for flowers finishing their development.

This is ACDC 7 on day 41. I believe the proper term is filthy. The boughs on this small plant are becoming rather comical points of interest on our walking/inspecting tours of the garden. We’ve got plenty of trichomes developing in our beds. Many plants are getting sugary, as they should while they flower. But these flowers have a higher concentration at an earlier stage than we’re used to seeing. This reminds me of our Blacklight plant a couple of years ago, but even that plant did not show her full trichomes until about the final ten days. This plant is showing early high concentrations. Her color has gone from green to purple to whatever you would like to call the above. We are anxious to bring these flowers in as cleanly as possible, dry them properly, and then drive a few of them to a lab. We need to know what we have here.

The contrast in color of ACDC 7 to every other plant in our beds is pronounced. She’s becoming our milk chocolate plant.

Yesterday’s trim was a basic six half gallon jar trim. Two A trim jars, and the rest was popcorn. It was nice to get the practice in before the crunch next month.

With one plant trimmed and in the house by mid-September, we are now rounding the final curve and the home stretch is in sight. Amidst the almost constant activity from this point to the finish, there is no time to waste. Aspects of the work, like compost tea, are beginning to ramp down to conclusion. I’ll make two five gallon buckets this week, but less than half will be used on cannabis. The rest will be vegetables and flowers, as everything we grow turns toward the finish line. 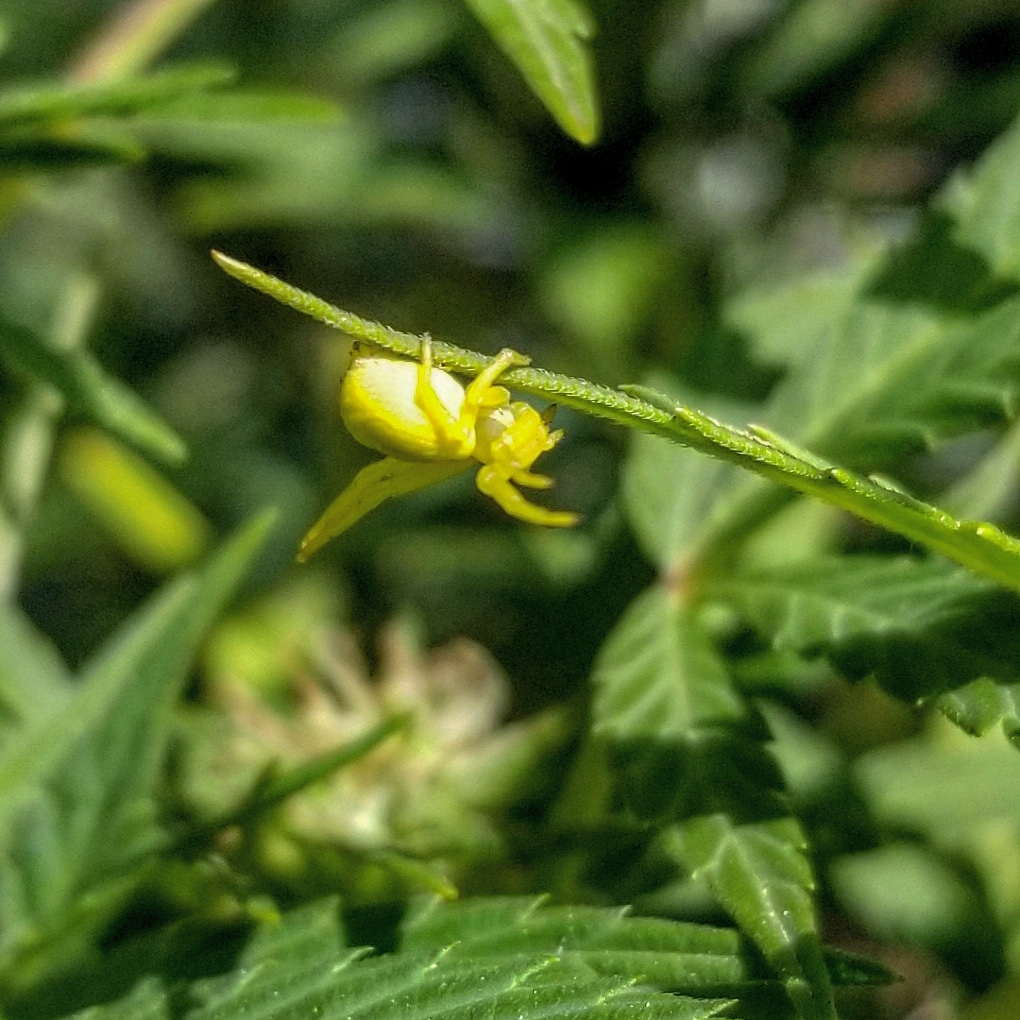 This crab spider is upside down with excitement over harvest!

It’s a heady time in the beds. An entire season of work has put our garden into prime “tour” shape. It’s pretty to walk around our beds now. Flowers are everywhere, and the smell is pervasive.

With one plant down, I am beginning to see the end in sight for this harvest. There are weeks ahead with an almost comically constant workload, but everything will be accomplished in an orderly fashion. This is no longer a new process for us. Once you’ve harvested a few years, you understand the final month will bring both an increase, and eventually, a reduction in workload. As each plant comes down, the stakes and risks rise for the remaining plants. Fatigue eventually plays a role, too. Harvest is the payoff, but it is also, in my opinion, the most tedious and potentially treacherous part of the entire grow. It is a challenge to maintain the proper plant discipline when attention is being diverted away from the beds. It is a mental and physical challenge, after trimming a plant all day, to walk out to the beds and perform a 2-3 hour inspection for mold. In a state of fatigue, it is not surprising to miss something during these late season inspections. When that happens, don’t be too shocked, and be quick to forgive yourself. It happens to all of us.

As suspected, an entire bough of Sour Tsunami has become ready. The rest of the plant is probably 2-5 days behind. We observed this bough was flowering days before the remainder of the plant began to turn. We’ve been watching the development of the flowers on this branch the last few weeks. She looked close a couple of days ago. There’s amber this morning, and on a CBD plant, that means take her down. 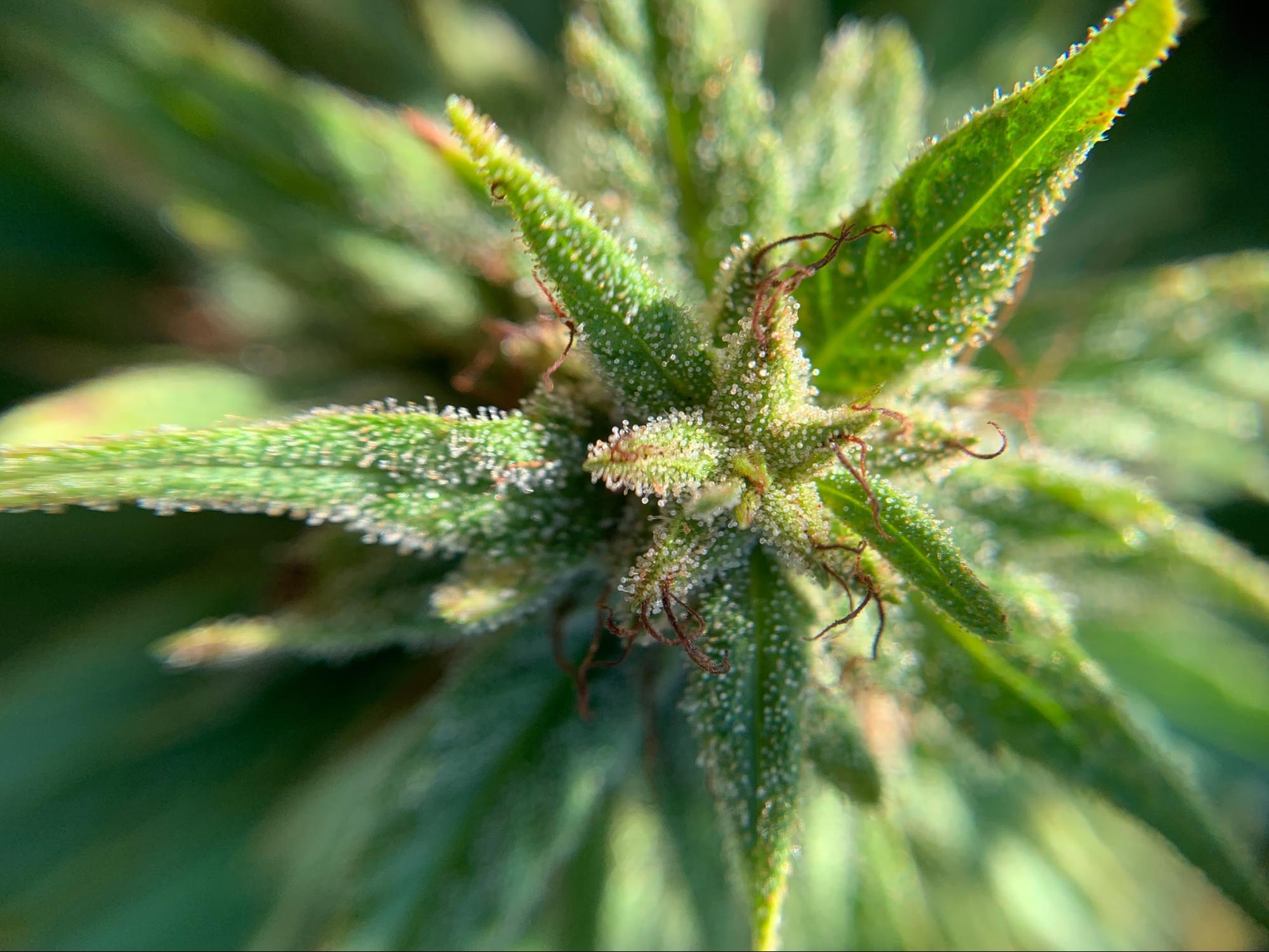 This Sour Tsunami flower is ready for harvest. All I need are a few amber trichomes. The rest of Sour Tsunami comes down in a few days. Then another, and another. 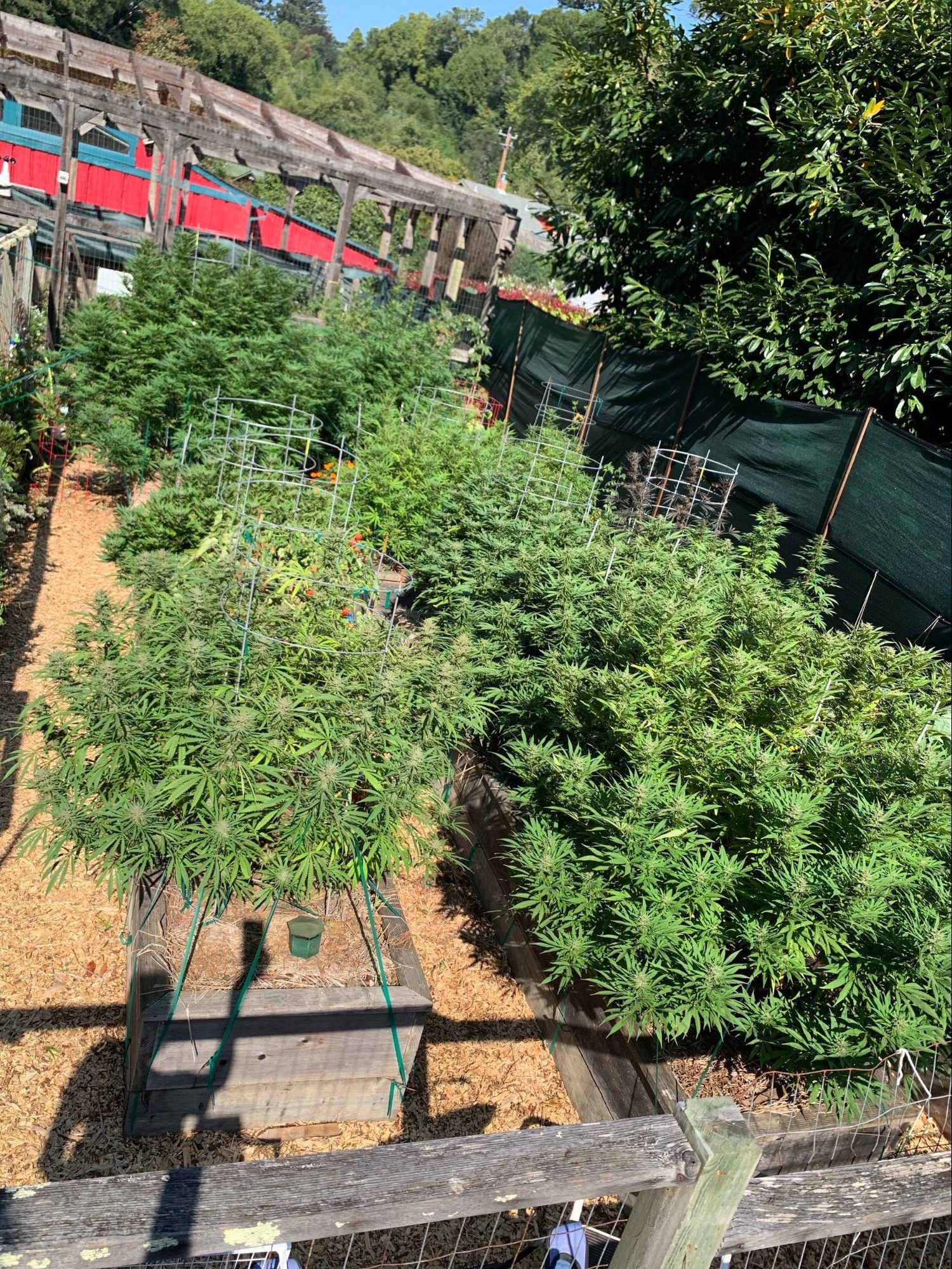