That smoke over the hillside is the Woodside fire.

Passed the four month birthday for the plants a couple of days ago. That means we are ⅔ through the entire process. The home stretch beckons.

At 11:00 last night, we got a message of a fire evacuation going on in our area. Turns out, it has not impacted us yet, and hopefully will not. But we’ve got to double-check our evacuation readiness. This is not the kind of message you ever want to receive, and especially just before bedtime.

It’s a smoky morning here, though there is no information as to if this smoke is from the local fire, or from the fire in Napa, a couple of counties north of us.

Just got word the fire grew a bit overnight, though we have still not been officially warned. We are right on the edge of the warning zone.

So we’re in “just in case” mode this morning. Printing all the documents we need if we have to flee. Getting a travel cage prepared for Charlie. Pack a bag with a few items of clothes. Then, be ready to go, should it come to that. Hopefully, it won’t.

The word is that there is currently no access to fight the fire. It basically just gets to burn until firefighters can access it. Other fires in the state have the air watering planes and copters, so it is being allowed to burn. Sketchy day. Smoky air.

So what would we do if we had to leave in a hurry? What would we bring from our home dispensary?

We would bring enough edibles and tinctures (they don’t take up much room) as we could fit in my backpack, which would probably be most everything in our fridge devoted to cannabis. We would not take any flower, because we’re not currently smoking at all, and those jars are too bulky. We would share whatever we take with us, with the people we grow for.

As for the plants in the beds, there’s nothing we can do but roll the dice and hope they survive, along with the house. It would hurt to lose all that medicine, but we’ve probably got enough made to last until we could grow again.

Nothing new to report so far this afternoon. No update on the fire, though winds are on the rise. Tomorrow will be breezier, as will Friday. But it calms over the weekend, and the hope is whatever fire lasts that long will be easier to contain.

On a different note, we also lost power for several hours a few days ago. This wasn’t one of California’s rolling blackout situations. This was an actual outage caused by downed trees.

It was the first time our generator has been used for real, and despite the hefty price tag, I’m a happy generator owner. It worked exactly as advertised, going on within three seconds of the power going out. We were able to turn off the breakers for the circuits we won’t need, but keep all our refrigerators on. And when the power returned, it was a seamless transition. We didn’t even notice the electricity had come back on. We only noticed the generator had stopped. Then we turned on a switch and Voila!

I was expecting this kind of generator to be mind numbingly loud, but it is not. We’d use it from about 8:00 in the morning to 8:00 in the evening, then let everything rest overnight. It’s how we’d keep drying, too. I hope it won’t come to that, but after this real time demo, we’re good to go into harvest with a generator backing up our drying room.

We’ll need to survive the wind today and tomorrow. It will calm on Saturday, but the next two days will be breezy. Right now, the wind is not blowing the fire in this direction. It is burning in an inaccessible part of the county, so it is burning freely. Airplanes are being used in different parts of the state on larger fires. Our fire has to burn until it gets to where fire workers can access it.

I got a basic tea brewing for a Saturday pour. No fertilizer today, just molasses, flowering plants and fruit. I even cut in a couple of naked ladies, which are blooming their shocking pinkness all over the valleys. We’ve transitioned from plums to crab apples for that simple sugar. Today’s tea was the first without any veg growing material included. It’s all flowers, all the time from here to harvest. I will hold off any more tea fertilizer until September.

As I wrote months ago, I’m consciously trying to cut back on the amount of liquid fertilizer I add to compost teas. With teas, it is always tempting to add a little bit, even a half cup, because the plants love it so. But as I explained, I am actively attempting to limit the amount of mold a plant is inspired to produce, by not over-fertilizing. Plants love to be fed, but when they are over stimulated, mold becomes much more likely.

As a working experiment, I planted a heirloom tomato plant (the stupice) in between two cannabis plants. I understand how degraded old tomato plants become, and how prone they are to mold as the plant ages and the temperatures cool. This is one of the reasons (but not the main reason) I stopped watering the plant almost seven weeks ago. I also stopped giving it any compost tea soon after stopping the water. I let the plant finish on its own. Slowly, I’ve begun pruning off extra growth, extra flowers, and as fruit is consumed and an area of the plant is left without fruit, that part of the plant is cut off. The lack of watering is minimizing the decay from my cuts. As the plant dies, I’ve yet to see any mold spores form on long hanging fruit. The moment I see any mold I will remove that section of plant. I will harvest the entire plant rather than allow mold to form and hang out.

This tomato plant has been given less fertilizer than any tomato plants I’ve ever grown. She got two compost teas with Grow formula early on, and that’s it. She got molasses and plants two times from the tea. She also had a hefty dose of salmon buried in the bed last November. Consequently, when I saw how she was growing, I made the judgment that she did not need extra anything. She has not been watered in over six weeks. She just needs to be watched, pruned, and allowed to fill her fruit as nature intended. She has produced the greatest number of perfectly shaped stupice that I’ve ever grown. They are literally perfect tomatoes. Sweet and juicy. She is peaking right now. Over the next couple of weeks, many tomatoes will be consumed, and then, she’ll be removed. 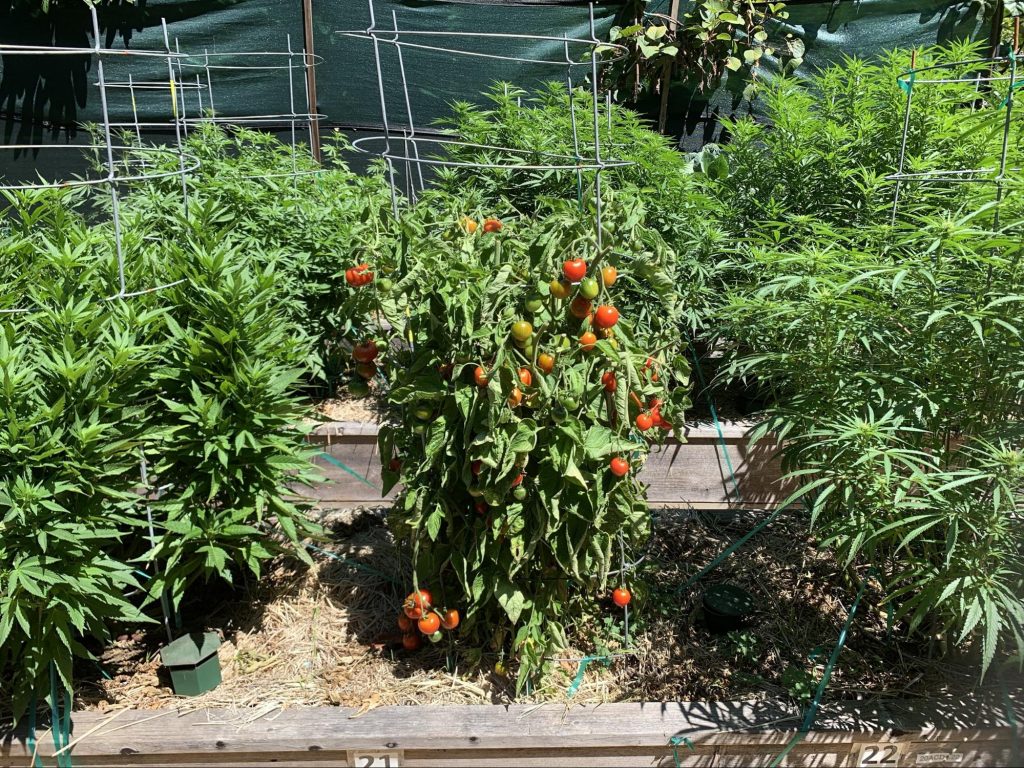 Next to her, of course, is ACDC 22, which proceeds as planned. I cut off a few leaves every couple of days and watch her tops. So far, these are some beautiful flowers. The leaf turning is consistent, though the rate seems to have slowed. Still another seven weeks or so before harvest. 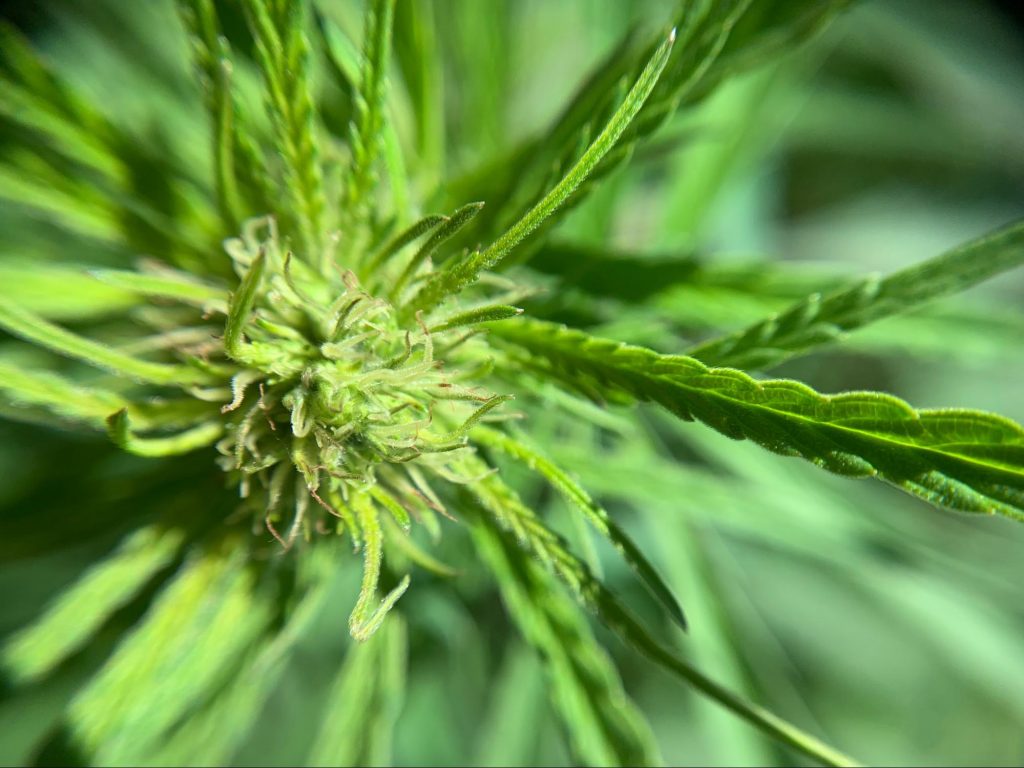 Other flowers are developing around the beds. Shiatsu Kush is in her second month and is beginning to get chunky. 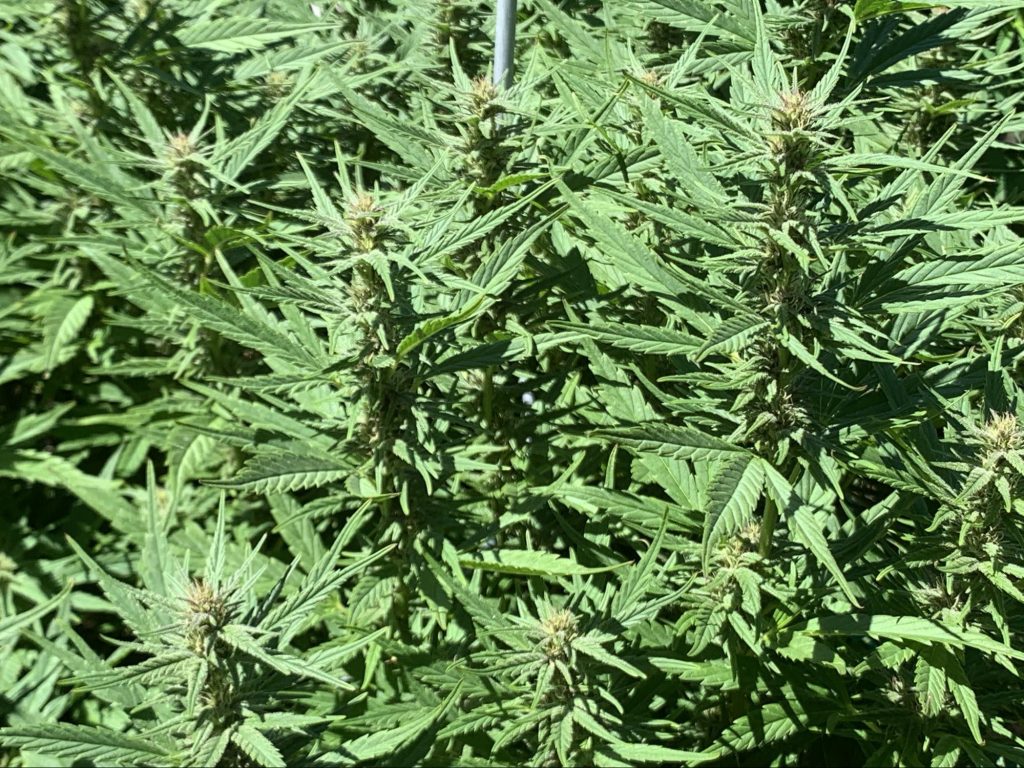 ACDC 7 is showing vigorous flower development on very thick stalks. These are going to be some monstrous, juicy flowers. 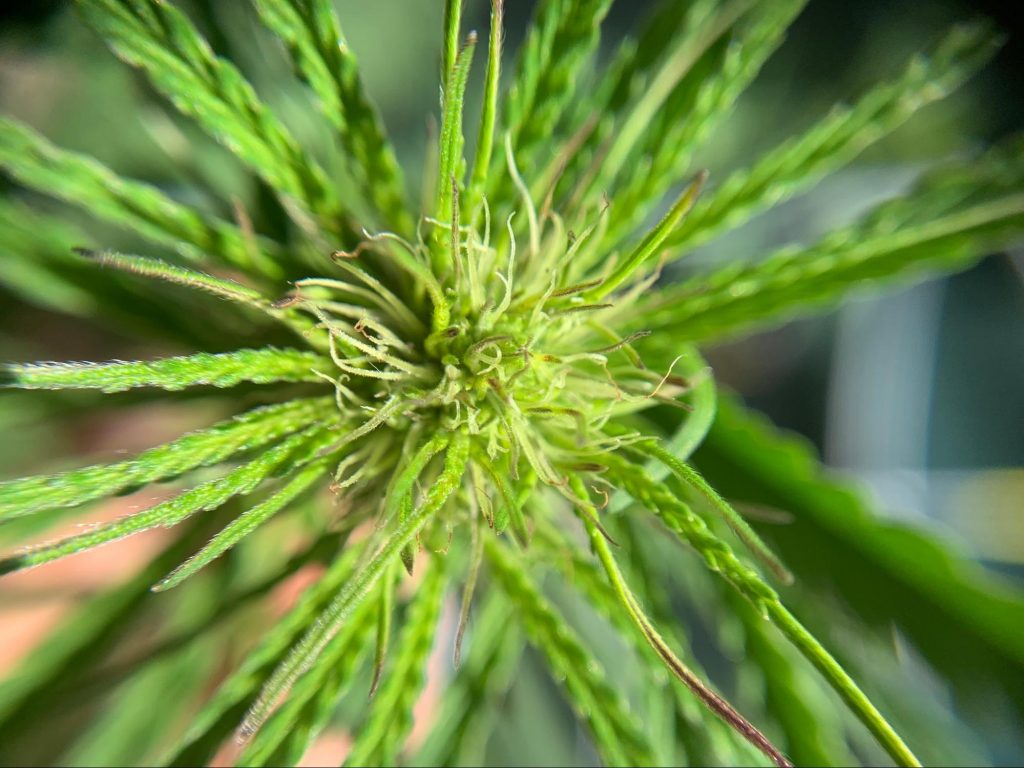 This thick stalk has got potential on ACDC 7.

Sour Tsunami is now covered with flowers, though one branch clearly has the most developed flowers. This one branch will probably be harvested a good week before the rest of the plant. She’s also getting trichomy on the inside. 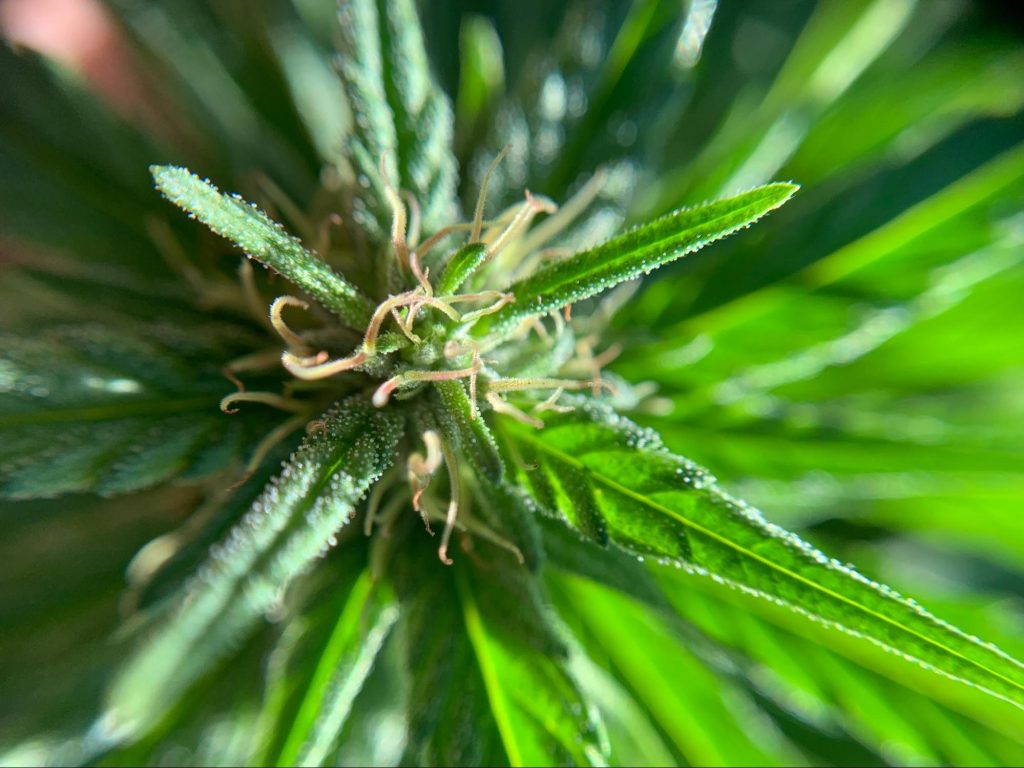 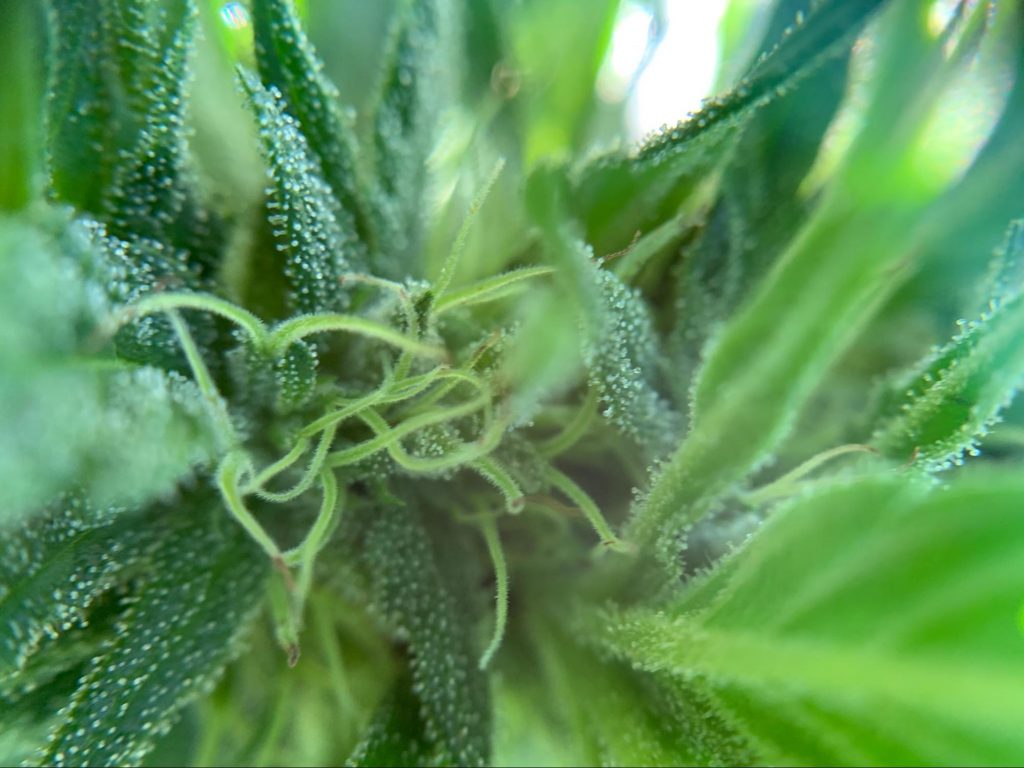 I will be back next week with many more flowering pictures, and information on how we make our own medicine. Apologies for the briefness of this blog, but there’s a fire not far from us. I need to focus on what is happening nearby, before I resume blogging.

Survive and vote. See you next Tuesday.