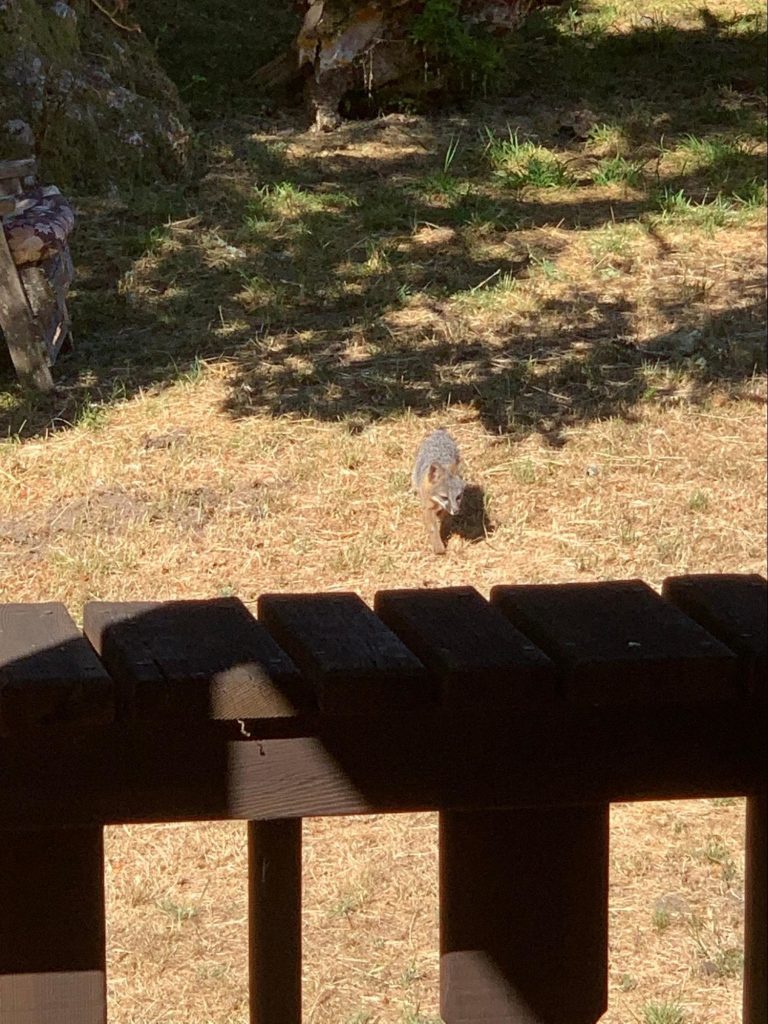 It’s official. We have a kit living on the property. Not sure how old, but it’s a youngster. Fox eventually become nocturnal hunters, but when they are kits, they are looking for food, and generally checking everything out during the day. We must be vigilant about keeping the garden and aviary gates closed to protect our ducks. But we welcome foxes to our property. The hills are full of them. We know this because they howl between 5-6 every morning for the last few weeks.

On patrol this evening, I decided to empty the slug catchers and refill. Yeah, that would be the first upchuck of the season, thank you very much. One of them was ripe, whoa.

Despite that, in the cooler evening, even when work is done, it feels good to sit down and linger. Smell whatever the summer breeze conjures, and listen to interactions of all the baby birds with their parents. At times, it sounds like they’re in school, because the responses from the fledglings are repetitive and can be heard all around the valley.

As I sit in the blue folding camping chair, next to the beer I only pour to kill pests, I am grateful for the perfect weather, and mindful it will not last. The humidity might be in the beginning phase of a shift, and I’ll be watching all week. Once that shift occurs, it will not let up until deep into Autumn, and after most, if not all these plants have been harvested.

I must also acknowledge that up to now, compared to the first two years of growing, there isn’t as much to do, and there certainly isn’t anywhere near the level of concern I had when I began. I spent two full growing seasons running back and forth to the beds, fretting over every little thing. In fairness, I had plenty to fret over the first couple of years. But one by one, each of the 22 beds has responded to all the work I’ve done on the soil. Developing a group of effective companion plants was another key. Creating an environment where nature does most of the police work is ideal.

Right now, it’s a feeding, trimming, training and monitoring job. It will continue to be those things throughout. It’s just about to become much more.

This work involves real diligence, and a consistent approach to plant maintenance, because if you don’t look very closely on a regular basis, you might miss when an authentic monster is present. Case in point: 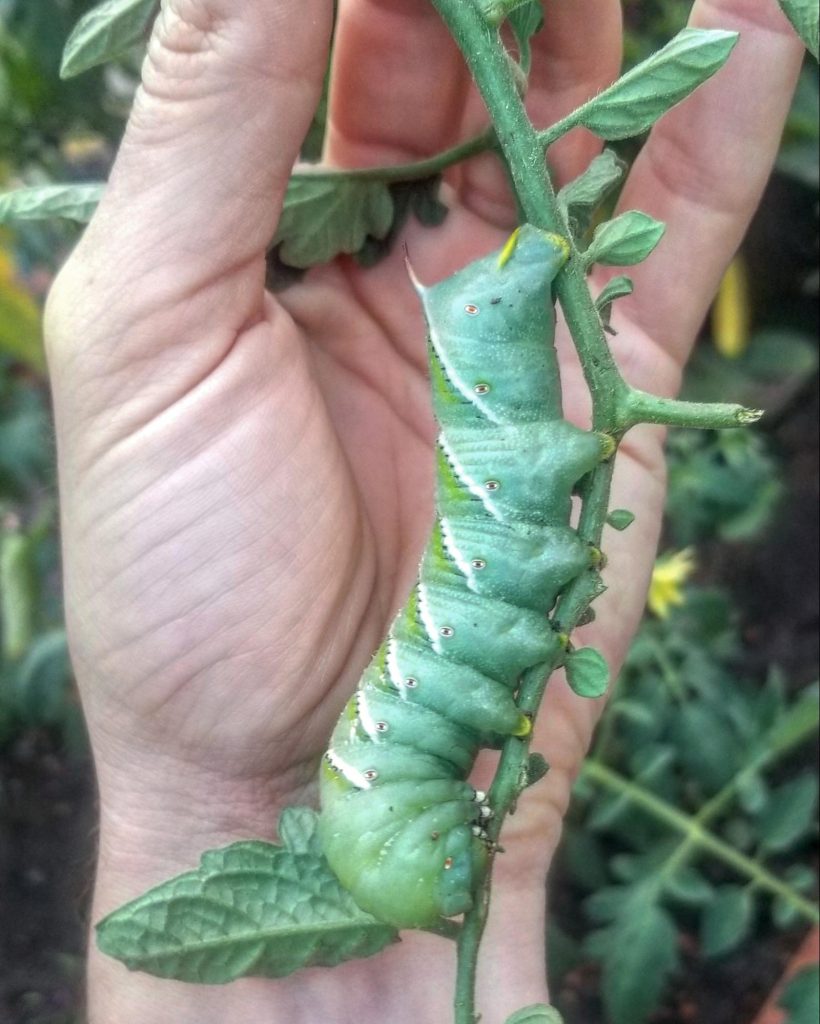 This is a hornworm, found on a tomato plant NOT on my property, (phew) but relatively nearby.

In those first two years of growing, everything was a huge issue. We had not found the right companion plants. The worm and eventual mold situations were out of control. During that second year, I considered stopping, because I was being overwhelmed, and frankly, felt that growing cannabis very well was probably a little out of my comfort zone.

It was during that second year when Brenden came to help me and that changed everything for me. I didn’t have to do it all by myself. Even if it was only one day a week, that help gave me the break to re-group and focus on solving the issues, and not simply accepting that it was always going to be that way, and reacting. I needed to continue advancing my own learning curve toward becoming a much better gardener.

I share this with all of you, because you should not be shy about either asking for help, or offering to lend a hand to a grower you know. Even if they tell you they’ve got it all under control, having help is an advantage. It is also how we teach each other. A new and objective set of eyes is vital. Someone else is much more likely to notice something you’ve missed. It’s the same reason a writer cherishes their editor.

Today, I’m seeing the first day where humidity remains higher than I’d like well into the day. I just checked and at 12:10 pm, humidity is still at 80%. If it does not go down this afternoon, I will either spray this evening (if it fogs up), or tomorrow morning at the latest. The overcast did not lift until close to 11:00 this morning, and it looks like every day this week will be similar. This might be the transitional week toward a higher mean humidity. If that is true, the most labor intensive part of the grow, from here to harvest, is beginning.

Up early, because it’s a foggy morning, and humidity is on the rise. The Regalia spray was up to three gallons today. It will be a four gallon spray in about two weeks.

Immediately after the spray, I began collecting material for the compost teas. Fresh new kiwi sprouts were cut, lemon verbena for aromatics, baby horsetail for silica (hard to find baby growth at this stage), two suckers from our 400 year old buckeye tree, and about 40 plums, squeezed and mostly seeded into the brew. This tea will provide explosive fuel for late stage veg growth.

I would like to make a special point about the suckers on the buckeye tree. Early in this series of blogs, I wrote about learning what grows around you. Sometimes, that’s like a treasure hunt. It was that way when I discovered horsetail. It was also like that when I dug around the base of this tree for mychroaize fungus. This tree is not just an ancient, living thing. It is a constant source of both nutrition and inspiration. When we talk about beneficial plants, or finding stalks of veg growth literally brimming with the microorganisms that promote vigorous soil health, can you imagine finding anything more beneficial to your developing plants than young growth from something living that is over 400 years old? 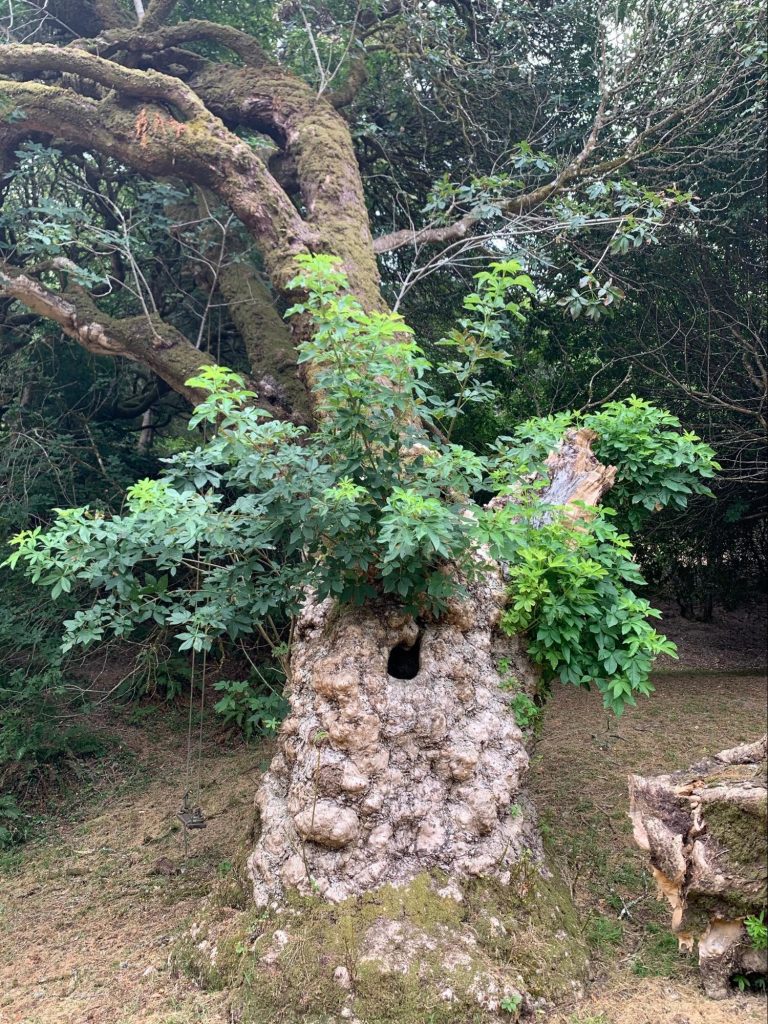 The light green stalks are the prime choice for tea.

The rise in humidity has definitely kicked me into a different gear. I woke up this morning and had to look at the plants before stretching. There was no visible powdery mildew, but I sprayed anyway. It’s time.

Another pathogen benchmark plant for me is zucchini. Though the pm is different from the pm on cannabis, it usually hits squash just before, or about the same time it shows on cannabis. Weekly sprays have prevented any sign so far, but I know it’s coming.

Watched a baby crow stick its head well into the fox den this morning, only to have something startle the baby into a small bit of inadvertent backward flight.

Today begins the process of thinning lesser stalks, as I walk from plant to plant and allow my eyes to settle on growth that needs to go. At this stage, I’m only looking for obvious choices. We’ve got literally months for final decisions on what stays and what goes.

But right now, two things can be done relatively stress free. Identify the stalks you know are going to be flowers and begin to prune around them. Begin to prune the in-between stalks that prevent larger stalks from growing freely. Once flowers begin, you want to minimize how much flowers interact with one another. As much as possible, you don’t want to touch the developing flowers at all, or have anything touching them. You can’t have flowers crammed together, so the sooner stalks are freed from conflicts with other stalks, the better. Like all other pruning, these cuts will enhance the remaining growth and eventual flowers. The more you cut off, the more energy goes into what remains.

I’ve used the same strategy for tomatoes for over 20 years, and it simply makes sense, When Oaksterdam started teaching about this, I knew I had a chance to grow good medicine. 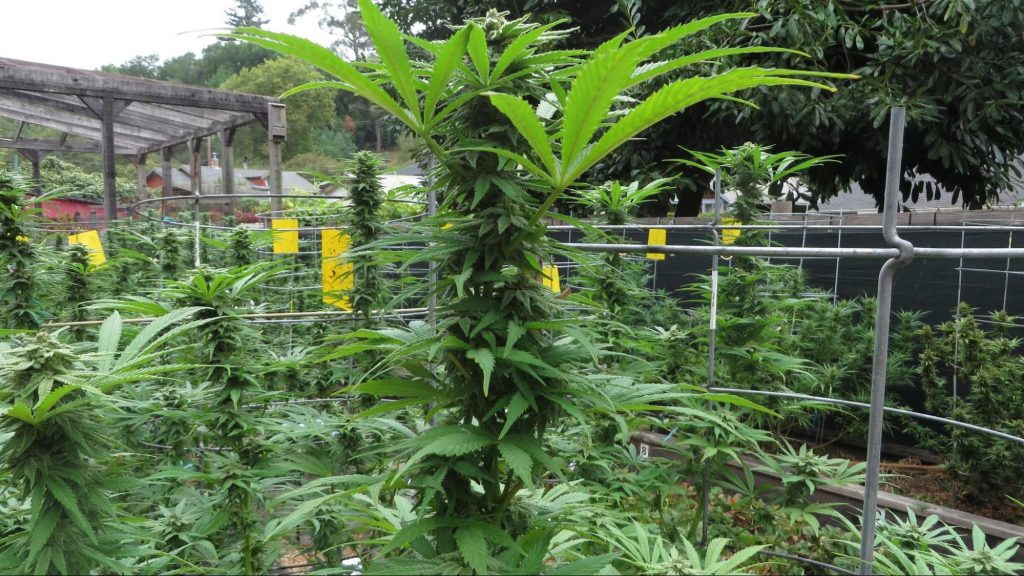 Something I’ve forgotten to mention about compost teas. At the end of every pour, before cleaning the buckets and pouring the residual fluid on our spice rack and other flowers, I have my green bags to dispose of. These bags are full of plant material, and have been aerated for about 50 hours. With each of those bags, before I empty them, I allow them to drain next to companion plants, and then I’ll designate one bed per week for placing the bag remains. I’ll simply lift the straw at the edge of a bed and place the material on top of the soil, but under the straw. Over the course of the growing season, every bed gets the green bags at some point. I love giving fresh food for the worms to deposit during the actual growing season. Nothing you put in the green bags for compost tea should ever be discarded. It should always be buried in a bed and put to use.

Ok, I’ve got a bit of clean up to do in the beds before tomorrow. At 11:00, I’ll be hosting my first virtual tour of the site for online Oaksterdam students. I generally keep a pretty clean grow site, but I’ve never had students looking at what I do and asking questions. At the very least, I should pick up all the empty cheap beer cans.

Truly wish the students could be here, and so honored to be hosting. I can’t wait.

We have our first flowering plant: Shiatsu Kush. Not surprised. She’s been clustering and I knew it was only a matter of days and not weeks. The first time we grew this plant, the first plant was harvested on September 18 of 2018. This year’s first harvest (I’m guessing) will be on or around the 13th or 14th of September. I do not suspect another plant will flower for a couple more weeks, and some of the ruderalis will only have recently begun flowering when Shiatsu Kush is being cut down. Think about that for a second. Nothing I write can underscore the wide variety of what I’m growing this year, more than that fact. Because of this plant flowering, next week’s teas will introduce the Bloom formula. An extra long period of flowering has begun. We are delighted to have one started. The earlier they flower, the better. September harvests miss the worst cold, and tend to be cleaner plants. The next phase begins, even while the majority of plants will not begin their own flowering for weeks.

Back on Tuesday. Stay safe. Survive and vote. 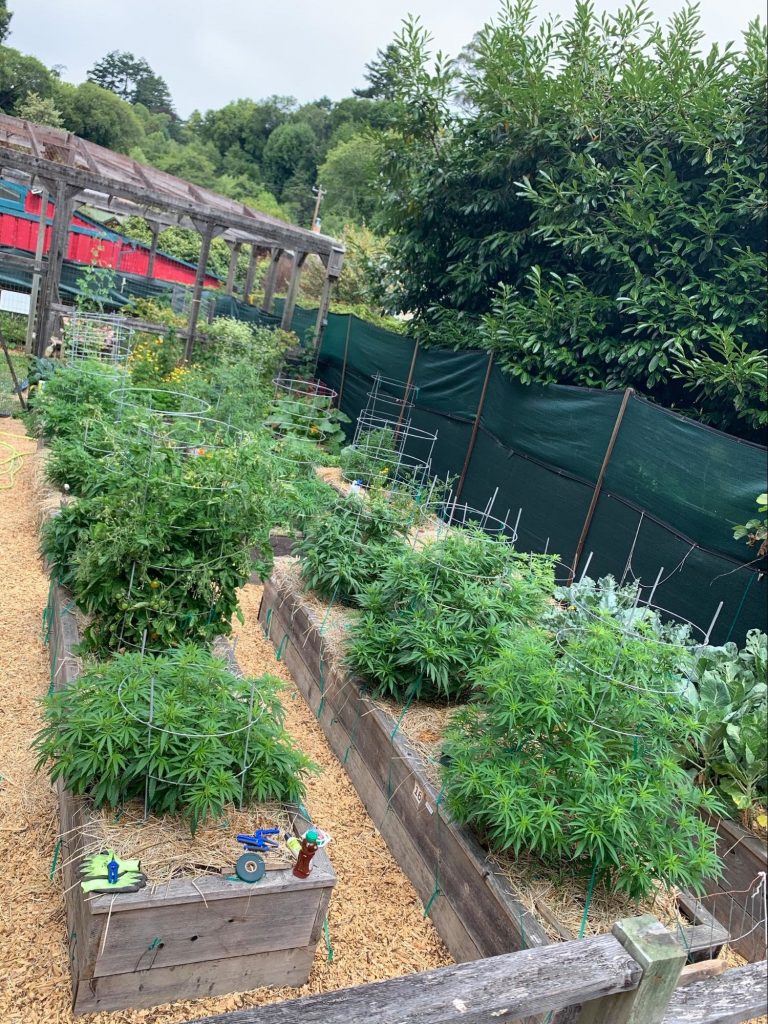 70℉  55% humidity  Getting misty at night as humidity grows.