All the plants are now in beds. The next couple of days are going to be very warm, prime growing days, followed by several days of wind. I want the new plants to have a couple of days before the wind hits them.

Also, for the first time since April 15, everything is turned off in the cottage except the dehumidifier. We’ll keep that on, because Karen wants to dry some lavender soon. But this should cut a couple hundred dollars at least from the monthly electric bill.

An 18 pack of beer arrived this afternoon. Thank you. With all plants in beds, it’s a maximum protection night ahead.

Witnessed something intense and beautiful this morning about 5:45. Sadly, I had no camera, and because of my proximity, if I’d moved to get a camera, what I was witnessing would have stopped.

A mother deer was coming down our hill with newly born twins. She was still licking the after birth off one of them, while the other was already in full boinga-boinga mode, springing feet into the air and hopping all over the lawn. I’ve seen baby (spotted) deer before. What made this so special were the two foxes frollicing down the hill with them, chasing the more active youngster while mommy cleaned the second.

By the excitement of the fox, it’s clear they witnessed the birth. I was concerned at first that they might attack one of the babies, but they seemed more intent to play. Jumping, leaping, straight into the air, as if voicing something. Yet, no sounds were made. While they chased the deer, and the youngster evaded them with spectacular ease, I relaxed. Besides, if Mom wasn’t concerned, I shouldn’t be, either.

I considered waking Karen, because she would have loved this. But I knew the critters would scatter if they saw me move. And I was right. I moved away from the window where I’d stood frozen, and stepped into the house. I turned and looked back toward the animal activity, and all of them were running up our hill and into the forest.

Today, I began a split compost tea brew. One five gallon bucket has greens, molasses and humic acid. The other has those things, plus one cup of fish emulsion.

The reason for the switch are the 2-3 plants that are hinting at flowering. They have not quite committed, but they are bunching at the top, so I know they are leaning that way. Enough sun and a heavy tea will turn that back to veg growth.

I can see right now that following harvest this year, our lovely Japanese maple tree will need trimming. She is limiting our early morning light. If we cut the top third off her, most of the plants in the beds would be in sunlight 30-60 minutes earlier. That is how much the maple tree has grown. Trimming this tree would have a profound impact. I’ll file that away for now, under things to do this fall/winter. I’ve considered doing this before, but it has obviously become necessary going forward.

In addition to the 2-3 plants hinting at flowering, it is also an opportune time for the first topping. Topping could probably be a blog by itself, as it is one of the most valuable growing tools a gardener wields.

Topping is a contradiction. When you top, you are simultaneously stunting and encouraging growth. We have used topping judiciously here, helping thwart plants from growing too tall, too fast. I would credit topping with almost single-handedly keeping our crop below the fence line the first year, which was the year before training really began.

When you top, a message is sent to the roots to move in different directions. Instead of moving up, the plant begins to grow out and to the sides. Because two sprouts emerge every time you top in one spot, you are also increasing the amount of potential flowers. So topping can dramatically add to yield. It can also cause extreme crowding that requires more pruning.

The best example I have for this is last year. We grew two White Widows. The taller plant, that was topped only twice, yielded 2.2 pounds, with fairly basic training. The shorter plant attempted to flower early, so she had almost everything topped. This caused an explosion of growth away from the stalk. As I pointed out in a photo from a previous blog, we trained that White Widow to grow over an empty bed. She wasn’t as tall as the other plant, but she was significantly wider, and more crowded internally. She took a lot of inner pruning to keep the flow of air moving through that giant. In the end, she yielded 2.7 pounds. All of that early topping, even with massive pruning, led to another half a pound of yield.

In the photo below, from last year, you can see both the White Widow that was only topped twice, and the fiery and lovely Japanese maple, that needs some pruning before next year’s grow. With only two tops, note how easy she was to prune and train in order to keep the large flowers separated. With so many toppings on the other plant, it required a lot more pruning to give the flowers a chance and the room to fully grow. The pictured plant only needed basic training for air and space. She was a breeze to grow. She’s the plant I took down while the fire was burning nearby. Btw, I have never attempted the process called fimming. 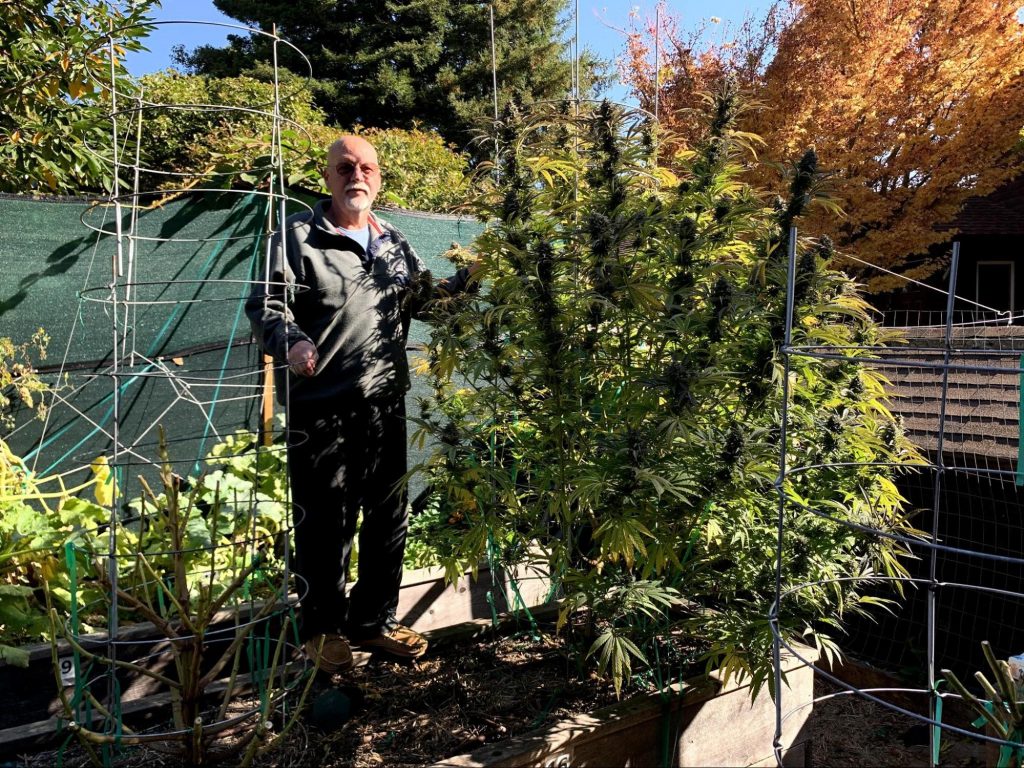 It is satisfying this year, to have all the plants in their beds by June 2. A couple are still a little small, but won’t be for long. Conditions have been ideal, and everything is in place for the first stretch of windy days that begin tomorrow. I appreciate the impact wind has on our plants. They become stronger and more vigorous. The wind also serves the vital purpose of drying plants after humidity moistens them overnight, or after a foliar spray.

I walked up our hill to clean the filter outside the 1,500 gallon water tank. While up there, I noticed what appears to be thousands of green plums, slowly ripening. If I’m lucky, I’ll be able to access these plums before squirrels commandeer the trees, and not leave until the last fruit has been consumed. The squirrels and I have very different uses for the plums. We both enjoy them as fruit, very much. But there are so many plums, that neither we, nor the squirrels can keep pace. I use the plums for their simple sugar in the teas. Cannabis LOVES sugar.

Squirrels like the sugar, too. But they especially like the sugar when it’s several days past prime and fermenting. The filthy secret about squirrels is this:  They are bad drunks. They like to eat as many over-ripe plums as possible, and then air their grievances covering a wide array of topics. They are not far from human when they’ve had one or two rotting plums too many. They are opinionated, interrupt constantly, and sometimes when making a sniggering point, they over do it just slightly, and fall off the tree. Yes, squirrels get drunk and fall off trees. We are not at that point yet, but in a few weeks, I sincerely hope to capture this on video. It all happens fast. We have had entire trees with their plums removed in only a few of days by hammered squirrels. In our judgement, squirrels are rude.

Tonight, I can expect raccoons around the cottage where I brew tea. The windows for that cottage are partly cracked, as is the door. We let it breathe a bit in there, because of the fish emulsion. Fish emulsion smells bad, and there’s really no way around it. No amount of aromatics have ever counteracted the odor of fish emulsion. I literally have mint and lemon verbena in that tea, and you’d never know it if you walked into the cottage.

So I expect the raccoons to congregate, simply from the odor. They can’t get into the cottage, and would not attempt to climb into the tea, even if they could. But once it is poured in the beds, I’ll also sprinkle some cayenne pepper where I poured, because I don’t want critters digging up plants in a frenzy to lick up fish juice.

One of our tomato plants now requires the top part of the cage for training. Soon, I will begin topping and pruning this plant, so that the fruit remains within the bottom portion of the cage. I want the top reserved for cannabis training.

This morning, I also emptied the slug catchers and buried about 50 slugs. More beer to pour this evening. Not a slug mark so far on the new transplants.

I texted Brenden a little while ago. His work here begins next week. One of the Ringo’s Gift plants will be ready for her first branches to be tied down. 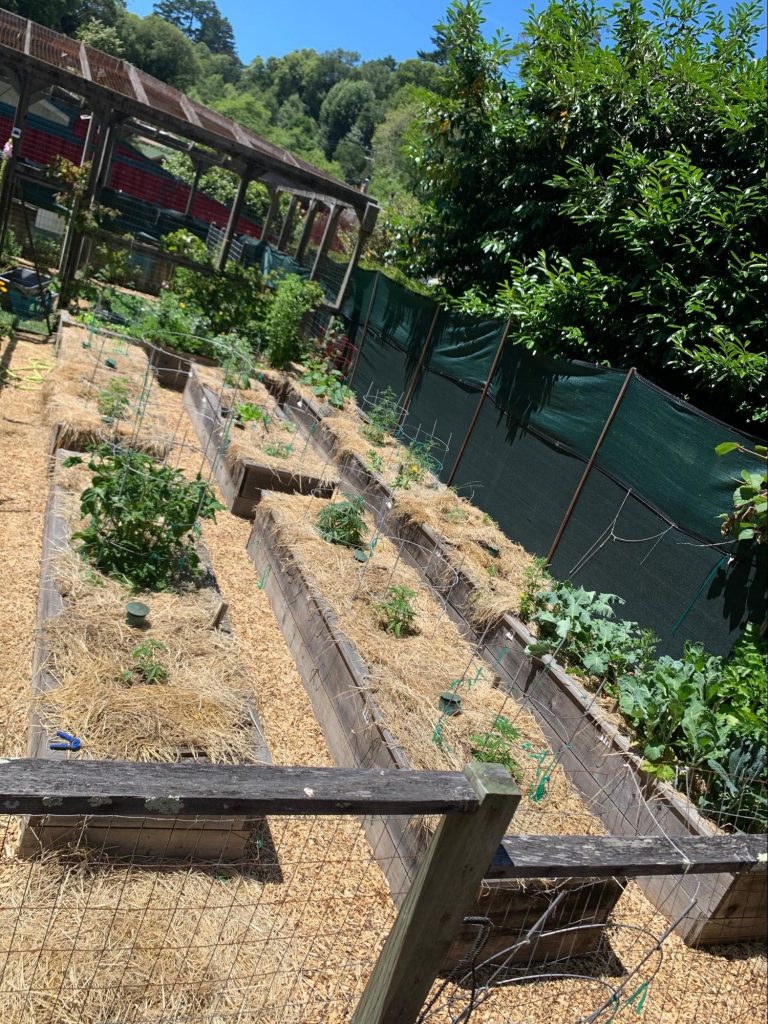