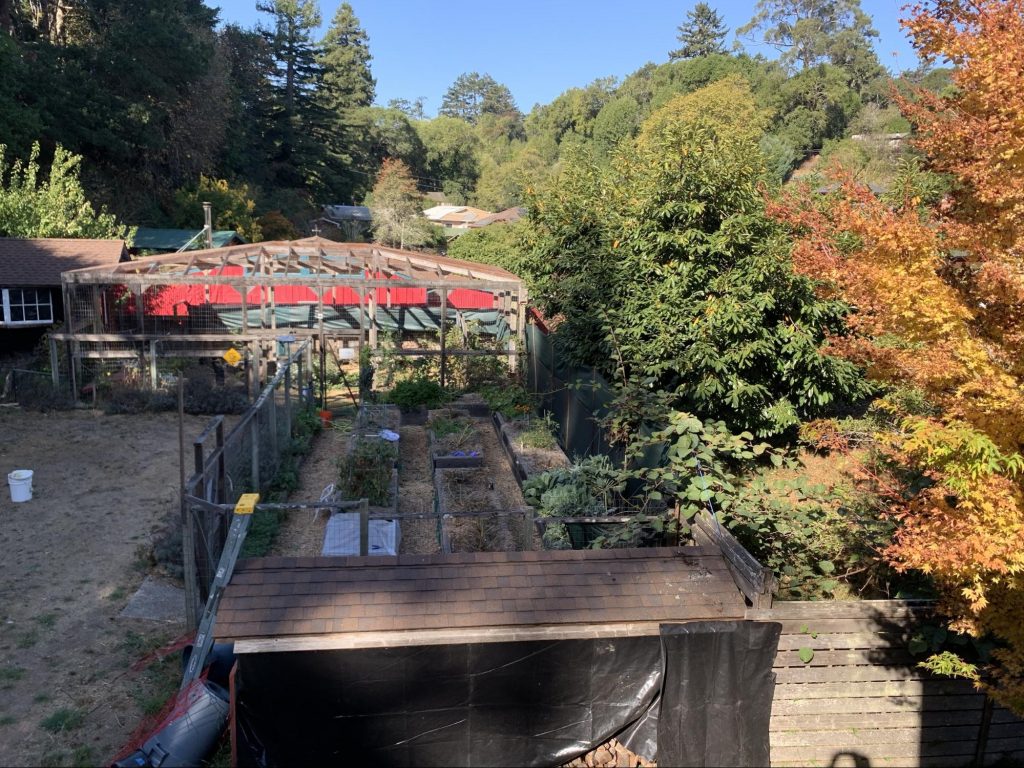 There’s less than four hours of direct sunlight on our beds per day. Glad the plants are down.

There ought to be a single guitar playing behind this with lots of reverb, plucking dreamy notes that hang in the air like memories. I walk around the beds and notice all the debris from harvest and six months of growing. I see clumps of plant tape, long, empty, hollow stems,and trimming scissors haphazardly lying in beds, threatening to rust. It’s time to clean up and prepare for winter. It’s also time to take advantage of some fall heat. It’s beginning to drop into the upper 30’s here at night, but daytime temps are still plenty warm enough for effective solarization.

The cages must be pulled, or dug from each bed and placed into storage until spring.

Tap roots must be pulled, and this is also an opportunity to stir the soil and correct any issues like I faced with bed 11, where the water was settling in the center and not draining properly through the bed. Stirring the soil and re-leveling everything should solve that issue. I’ll know if I’ve solved it by the way fava beans grow after I plant them in January.

The last two days have been trimming days. We’ve trimmed Bubba God and we just finished Rainbow Kush from bed 16. RK 16 was the first of our big three plants finale. We knew the last three were the largest in the beds. RK 16 was the smallest of the three. She yielded 2.15 total pounds, including 1.25 pounds, six full half gallon jars, of “A” trim. They were the kind of nugs you don’t want to stop trimming. They were hard to the touch, like a thin, sturdy shell encased them. Made trimming ridiculously easy. Remaining leaves popped out like corks. They were well and truly dried, too. That makes all the difference. It also makes for a lot of kief under each trimming tray. 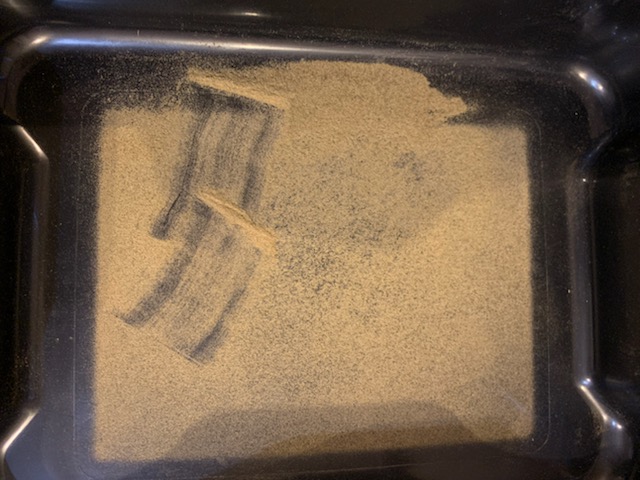 This is the kief under only one trimming tray. We’ve got a lot of Rainbow Kush kief. Yum.

My advice to first time growers is to dry your flowers completely before the final trim. Having them completely dry makes it easier on the scissors. We were changing scissors after about every three flowers. If they had been any more wet, we’d have changed after every flower. Everything that remains will be similarly sticky. The other Rainbow Kush, RK 18, stood a full foot taller than RK 16, with a much wider circumference. After what we trimmed today, RK 18 might be our first three pound plant. She’ll be close. For that matter, RG 11 (Ringo’s Gift) is even taller than RK 18, and might have more flowers, though they are not as huge as the Kush. We’ve got our two largest plants remaining to trim. I see Sunday and Monday of next week being our final trimming days. 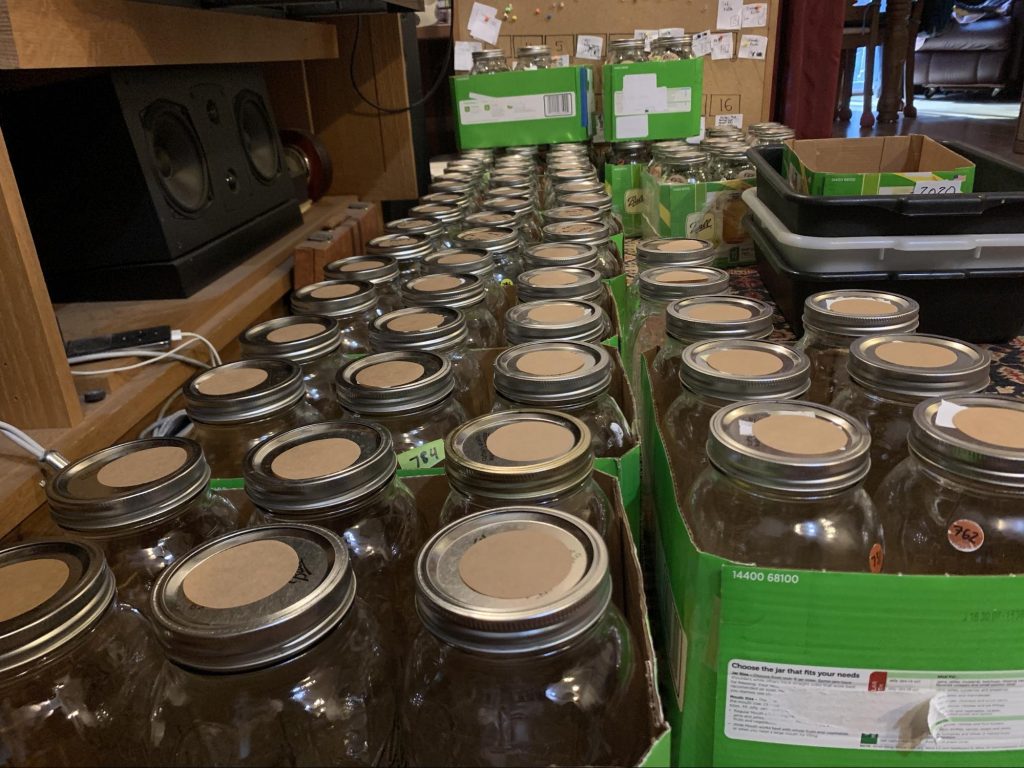 Right now, the living room is filling with half gallon jars. We keep them here for about a month, so that burping is more convenient, and when they are right in front of us, we are less likely to forget.

Burping is such a subtly necessary process. We have cured well, and we have been sloppy in our curing, and the differences have been noted over the years. Curing is where the plant develops her full aroma and taste. It’s a terpene thing.

Because I seldom smoke (once or twice a month, max), I don’t think about flavor as much as many others. I get it, through the odor, but I’m much more the pragmatic grower. I understand there are true connoisseurs of cannabis odor and flavor. I enjoy the odor, and don’t actually care about the flavor.

What I care about is how I feel after ingesting the plant, or how Karen feels. That’s the only criteria that matters to me.

However, there is a more practical purpose to burping. If you have not completely dried the plant in the drying room, burping is where you rid the stored plant of any remaining moisture. If you are consistent about burping, you will enjoy the results. Some of our most fragrant plants are still from years ago, when we burped with near religious fervor.

But if you have plants still a bit moist, and you don’t burp the jars holding those slightly moist buds, you will open that jar one day to the immediately nauseating stench of mold. It has happened to us. That was back when we immediately stored everything in the closet. It was more challenging remembering to burp when the jars were out of sight. Hence, the living room remains burping central until we get down to burping once a week or less. That’s when it is time to store in the closet. This transfer takes place by the second or third week of November. 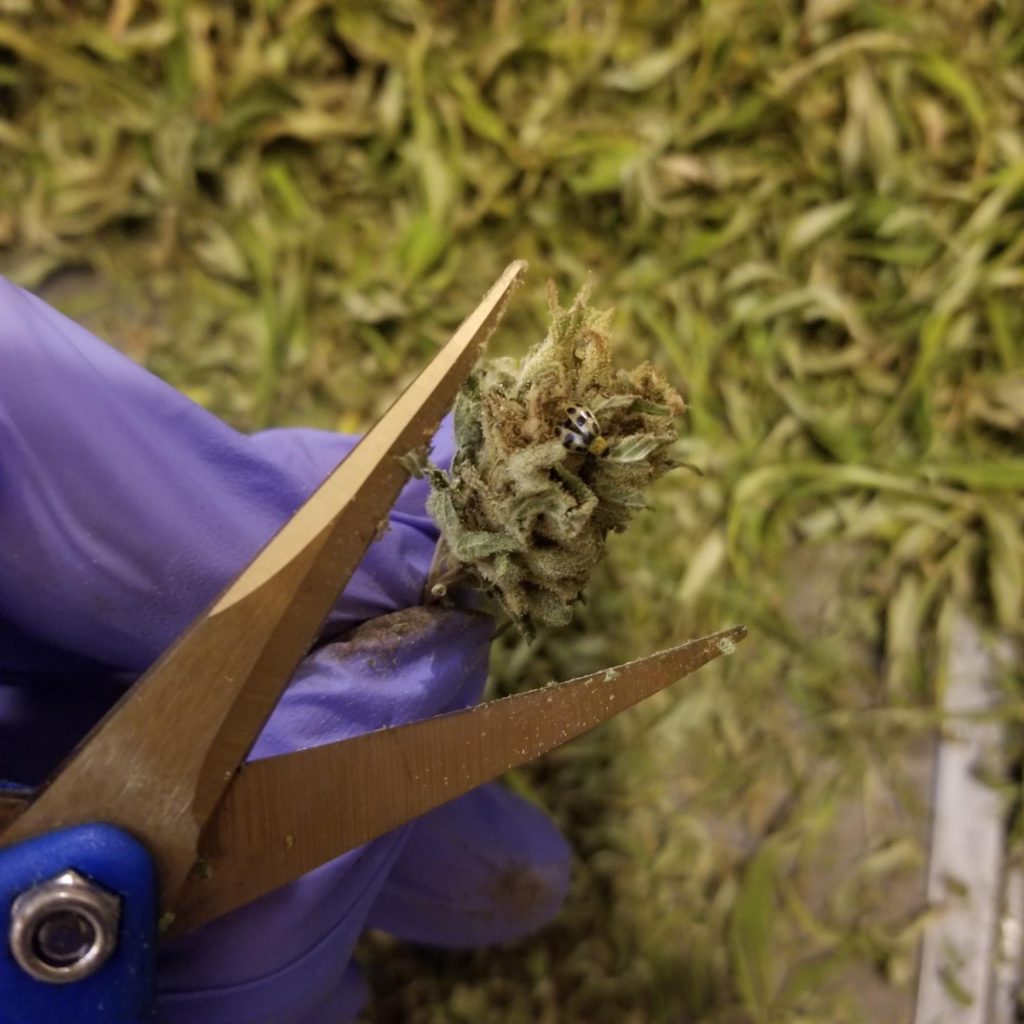 A single, dead western cucumber survived the wash and trim, still stuck to a piece of flower.

So that leaves us with the rest of this week to transform the ghost town of our beds into the solarization field that will serve to purge the beds of both pests and pathogens in preparation for another year of growing. Like I’ve written, this growing year is not done until next year has begun.

I await the arrival of Bee to assist me in cleaning up. My back is very much feeling the end of harvest, so I need to stretch well, and move mindfully as I proceed with this work. My days of working heroically solo are pretty much in the rearview mirror. Extra hands are needed, and frankly, during the pandemic, I also crave the company.

I managed to put away all but four of the 27 cage parts assembled. Four need a younger back than mine to pull out of the soil. Four tap roots also remain that will have to be dug out by shovel. It is no coincidence that the four are the largest four plants we grew this year.

Withered fan leaves lie on the ground all over the beds, and gloves stuffed with moldy bits await transport to the trash.

The last two mornings have had temperatures closing in on freezing, while daytime highs rise 40 degrees by early afternoon.

This is the week stuff needs pulling. The tomato plant, with about 15 ripe tomatoes waiting for the last BLT of the season, needs pulling. Everything must go; except for the few beds we’ll keep growing greens over the winter. 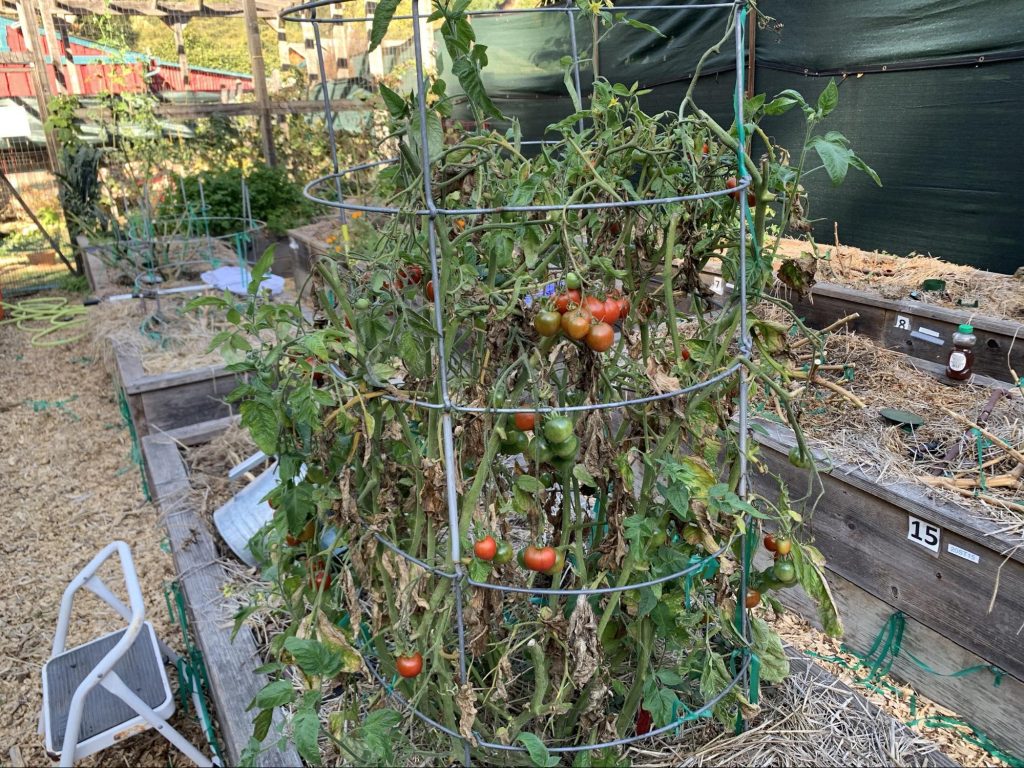 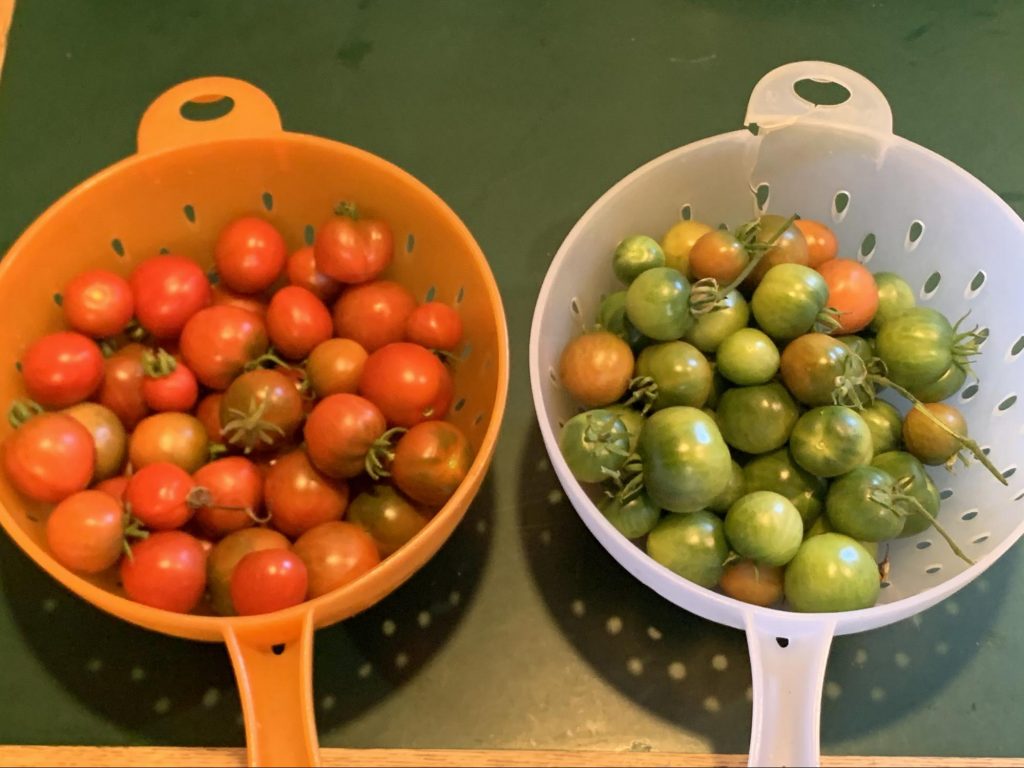 After a summer of producing well over 200 pieces of fruit, this is how many tomatoes remained before pulling that plant. Looks like some BLT’s and some fried green tomatoes coming right up. 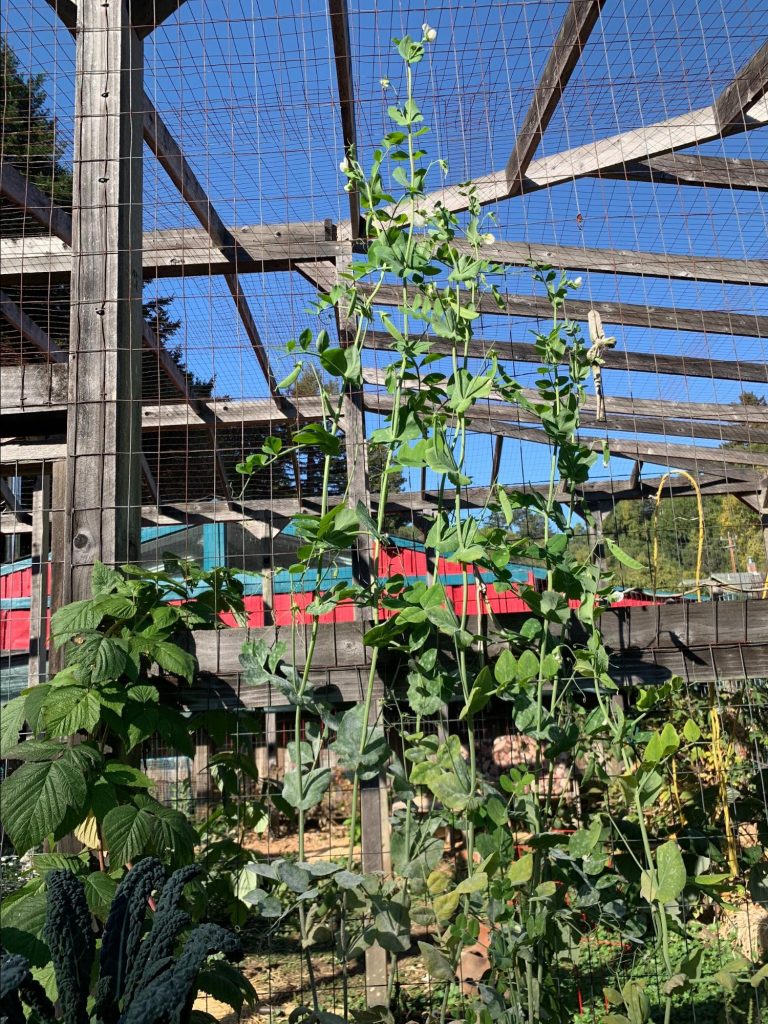 We’ve got some late peas to eat, though the leaves are being withered by powdery mildew that I’m no longer spraying. 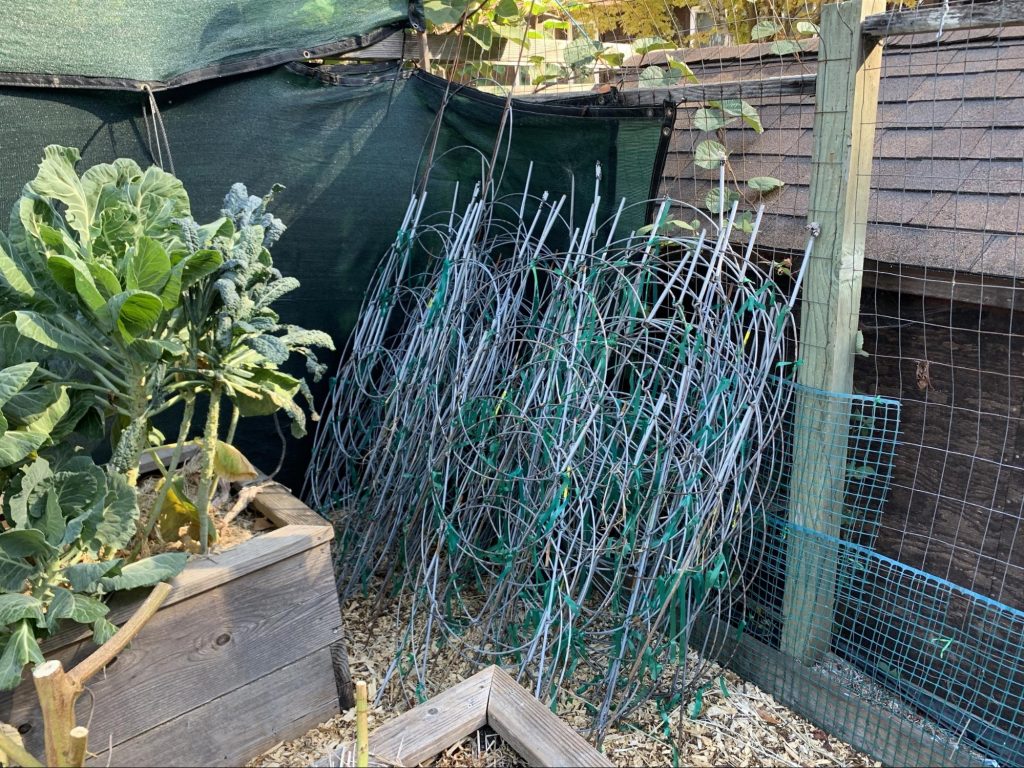 Cages are being stacked upright in the corner of the beds most vulnerable to critters breaking in. It is quite the maze of metal in that corner.

Tap roots are being pulled and revealed to the light. Below is the tap root for RG 11, the tallest plant we’ve grown to date. 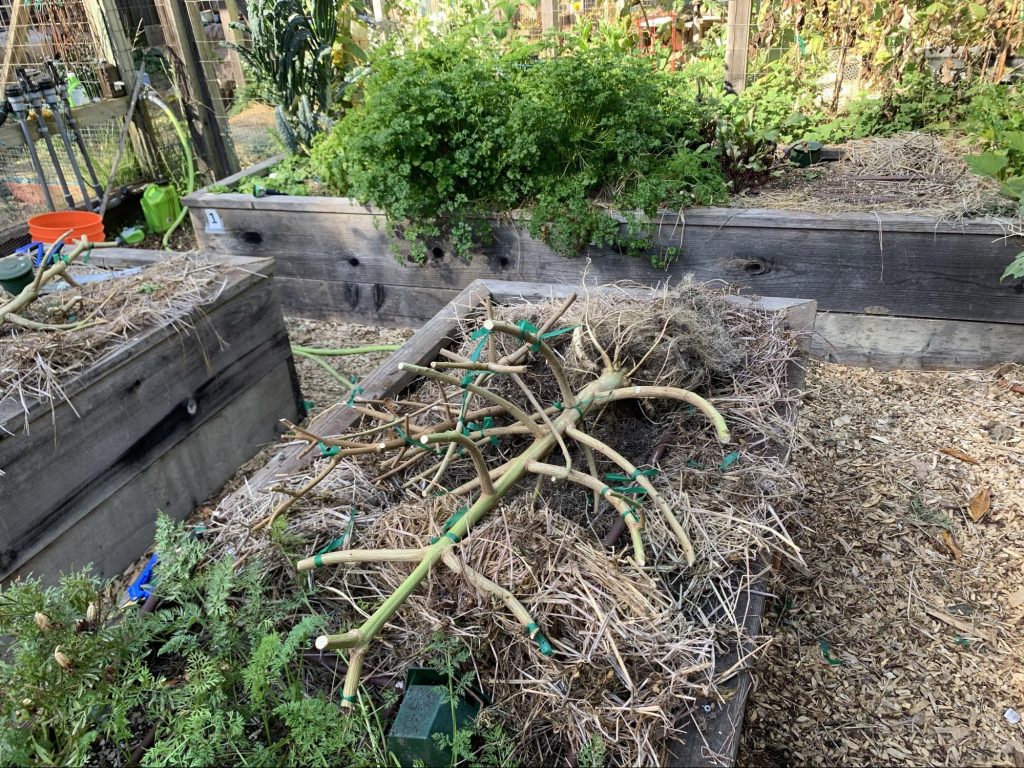 This is the Ringo’s Gift you saw me place into this bed in the blog titled Planting Day.

Next up is RK 18, the largest plant by circumference that we’ve grown to date. 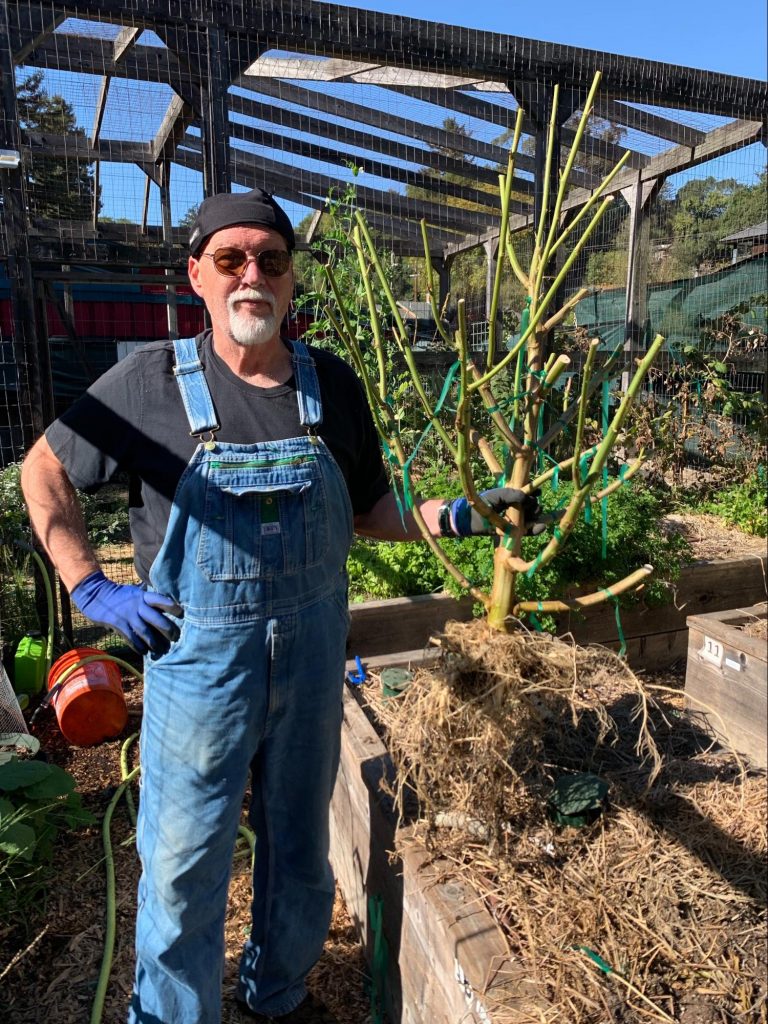 RK 18. Bee dug her out. Only from seed do you see root structures like this. 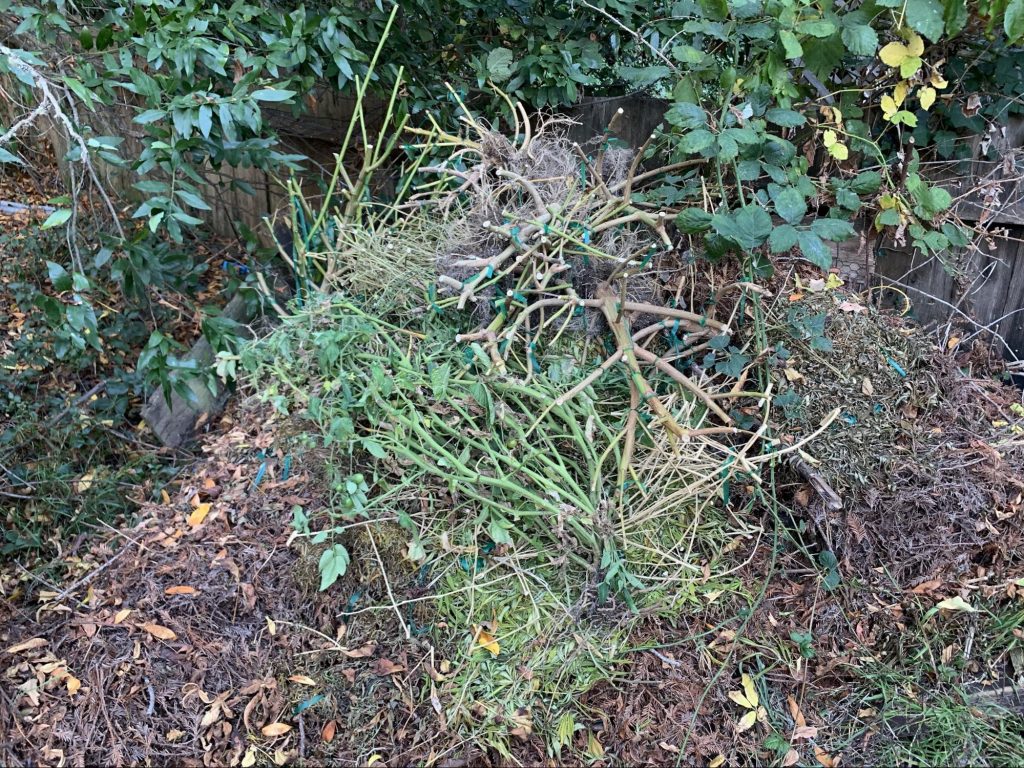 The graveyard for fan leaves and tap roots. This is what we used to call our compost pile.

We will eventually cover all the beds, but right now, we want to cover the beds we’ll be using for cannabis next year. We’re having a heat wave that should continue the next ten days at least. Rain will be coming soon. But until it does, and while it’s still warm enough to almost be considered an Indian Summer, I want to seal our beds and bake their insides.

We pull the plastic over the beds, center it and cut it at the far end. Then we staple it shut all the way around. For some of the beds, we can pull the entire plastic sheet over three at a time and staple them down. In the case of beds 11-13, bed 12 still has carrots growing. We’ll harvest them in a few days, but in the meantime, we cut a piece large enough to cover bed 12, and we fold it over bed 11.

Solarization is now complete. Odds and ends remain around the beds for clean up, but that is enough for today. Digging and pulling tap roots is sketchy work for my back. I’ll stretch and return for the final clean up tomorrow.

In the meantime, folks, please survive and vote. Two blogs remain next week. 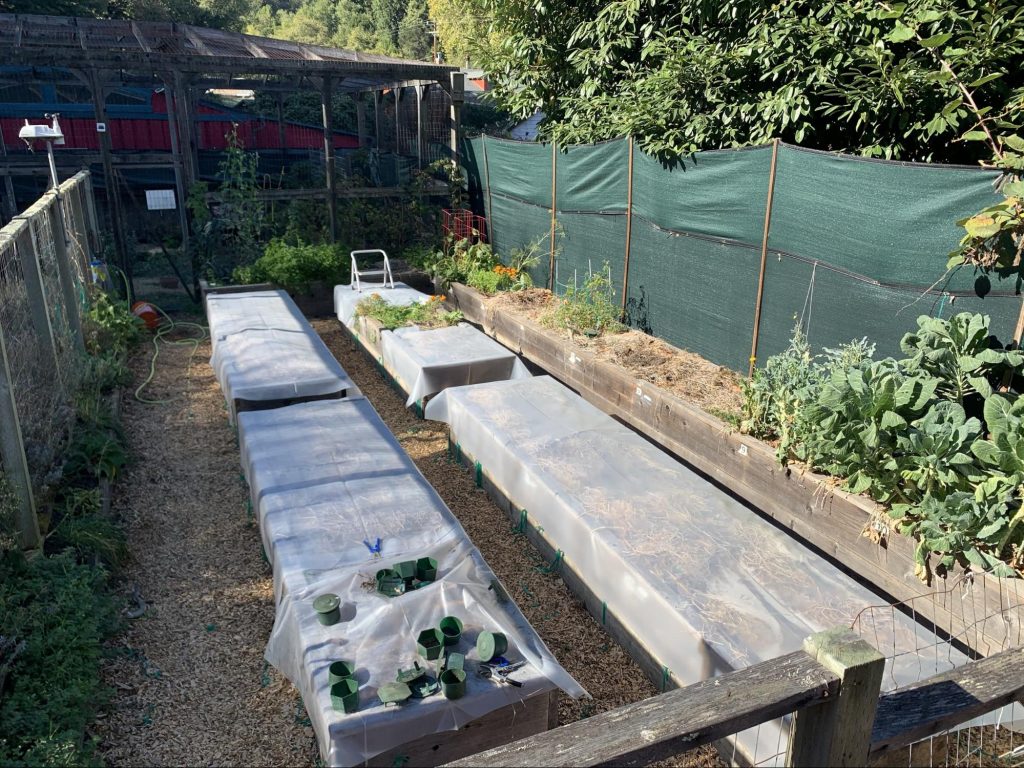 The beds are now being solarized. The first step toward next year’s grow has begun. To celebrate the completion of this task, and to set my sights immediately on next year, I purchased a few seeds: 10 CBD Therapy, and 10 Hindu Kush. I can’t wait to grow again.