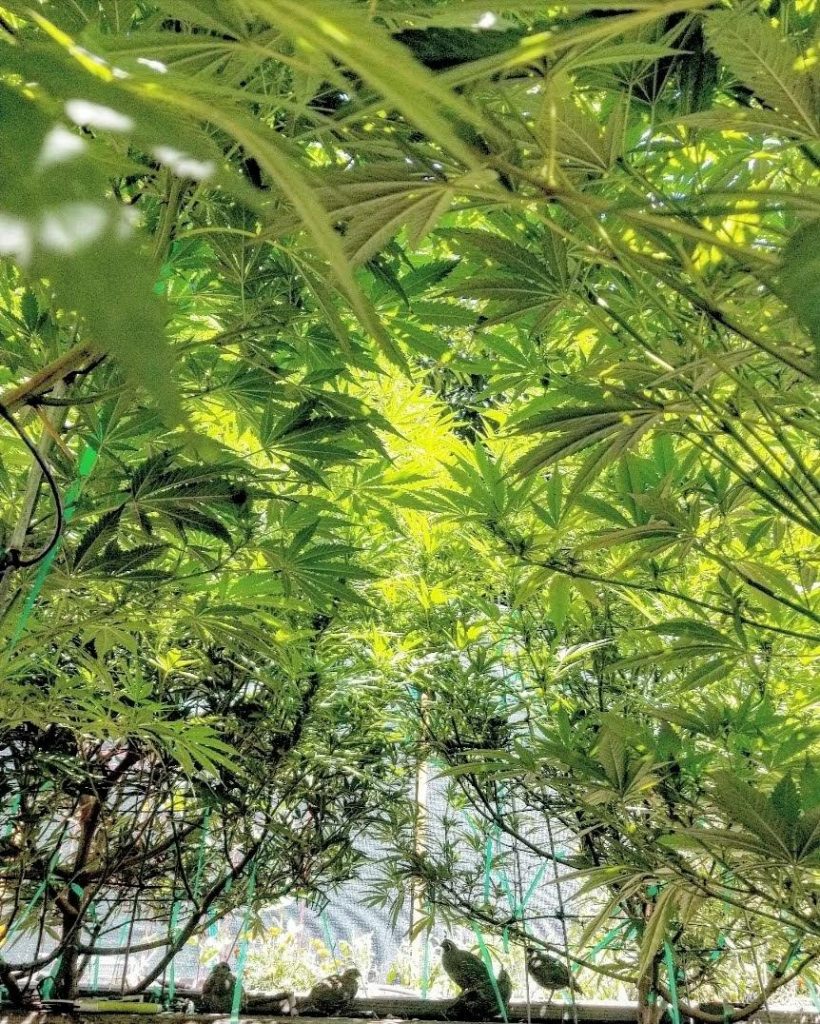 One day last summer, June 10, 2019, we had the hottest day we’ve had in our 22 years at this home. It reached 102 degrees Fahrenheit. During this heat, as you can see in the photo, local quail flew into the garden and took comfort beneath the canopy of our cannabis plants for the afternoon. They remained while we worked, including a foliar spray, which is testament to how hot it was, and how much the local quail trusted us. I think they were simply too hot to move. Also of note in the photo are all the strands of green plant tape. You can see how much training was going on inside these cultivars, a White Widow, and a Rainbow Kush.

We are in a coastal environment in the northern half of California. 100 plus degree days do not happen often on this part of the coast. To be able to observe a day like this in our garden was a unique and educational experience.

The first thing I noticed all around the bed that morning were fan leaves starting to turn up at the ends. This is a sure sign of early heat stress. I know how tempting it is to run water on wilting plants in the middle of the day, but it is actually wise to wait until it has cooled down some before watering. When I’ve had stressed plants from lack of water, I’ll give them an evening drink, and a full soak in the morning. Morning is always best for watering because that’s when the greatest photosynthesis occurs. Morning is when cooler soil temperature allows for the capillaries of the root zone to open, and for the plant to “drink in” water.

Nothing in our garden was happy that morning, and the solution clearly was water. Thankfully, it was only 7:30 in the morning, though over 80 degrees and rising. So, I ran over 700 gallons of water via drip irrigation into 22 beds, and this kept all of our plants, cannabis and food, from being damaged. There was no browning, and the fan leaves uncurled. Being applied via drip, it was gentle on the plants. This is very important during heat, because water droplets can magnify sunlight and burn leaves and stems. Drip eliminates this potential issue, as long as the lines are buried or covered. This is another reason we keep straw around the growing plants. As the heat rose, the cannabis went dormant, completely shutting down, but because the ground was moist, the plants remained comfortable both this day and the next, which was nearly as warm. There was one tremendous benefit to the heat: the temporary death of powdery mildew. It cannot live in 100 degrees plus. One thing that was remarkable to witness was the dormancy. Our plants were growing inches a day at that point. We were getting close to solstice and each plant was in a full vegetative sprint. Both that day, and the next, our plants barely grew in the heat. Normal growing did not return until the temperature dropped by nearly 20 degrees. Some growers in warmer parts of Northern California away from the coast have reported their greatest growth is during the night over July and August.

Close to noon, when temps hit over 100 and remained there, I witnessed something out of the ordinary. I expect moths and butterflies to float in and out of the beds all day, periodically landing, and laying eggs. But suddenly, there were dozens of moths landing on our plants. They were not flitting around, they were landing squarely, and proceeding to egg laying immediately. I walked around and watched them do this. My presence was immaterial to the sudden frenzy of egg laying. I am unaware of any mechanism in moths or butterflies that is triggered by heat, causing them to lay eggs en masse, immediately.

I had a choice. I could wait until it cooled to spray, or I could just spray BT. We decided to have a little lunch and wait. We got sandwiches, grabbed a couple of chairs and ate our lunch in a nearby creek. Cold water has seldom felt so good on the toes. 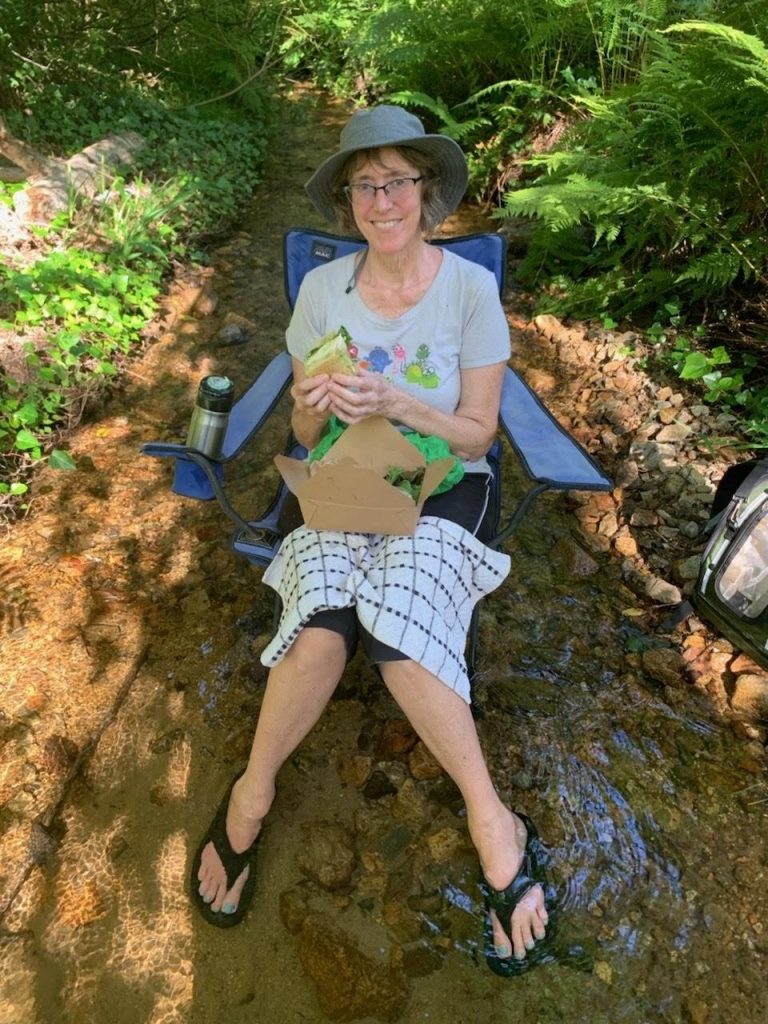 After getting our feet wet, and eating, I returned to the beds, and that is when the quail arrived, remaining for the majority of the afternoon.

The heat impacted all living things that I witnessed. We filled our bird baths several times. Jays, chestnut breasted chickadees, purple finches, and even acorn woodpeckers bathed that day. Remaining wet, or in shade, were the clear choices facing all the wild birds. I noticed towhees and golden crow sparrows taking sips of water from the duck bath. Desperate times call for desperate measures, I guess. Prior to this day, I’d never seen birds taking sips from the duck bath water. Especially while the ducks were in the tub.

The quail were mostly still and silent. Our ducks, who routinely discuss and comment about most things, stayed in their 70 gallon pool all day long, and did not quack, even when other birds were taking advantage of the duck water.

Eventually, I gave a thorough BT spray in the late afternoon, which is the recommended time for that particular spray. I made certain the spray washed away as many eggs as possible into the soil. There, any surviving worms would get sick, die, and be happily consumed by the bed.

That evening, it was still quite warm. It was a rare, sub-tropical heat wave in Northern California. A few scattered clouds passed overhead and dropped a couple dozen unmeasurable rain drops onto the day. The smell of rain, the humidity, all took me back to childhood memories of fireflies in the Ozark mountains of Arkansas, where both my parents were raised. It was an intoxicating aroma that brought not only fireflies, but also tornadoes, which I have witnessed. Events like tornadoes are not typically the source of warm and fuzzy memories, but in this case, it was for me.

I had a delightful evening pruning. Took me right back to my roots, picking apricots from my backyard tree. I thought about my late parents. Not at all sure what they would have thought about what I now grow, but they both loved Karen so much, I’m pretty certain they would have eventually understood. They definitely would have gotten it if they’d ever taken one of our high CBD tinctures for pain. I look a lot like my Dad, but I am more like my Mom.

I sat on the edge of one of the growing beds as the quail finally rose, stretched and flew out of the garden. They are not good flyers, but this time, they managed to not run into anything until careening to a stop somewhere in a coffee berry bush on the other end of the property. I breathed in the cool evening. I don’t enjoy heat very much, but as it turned out, I loved the hottest day we ever had here.

That was a day of stress in the garden. I rose in the morning to conditions I had not faced before as a grower, and I knew what to do without having to email my teacher, or consult my old textbook, The Marijuana Grower’s Handbook, by Ed Rosenthal (which I still refer to constantly, and I bought a copy for Brenden). That day was one of the first times I felt like a farmer. Walked in from the beds at dusk, grinning ear to ear.