We received some stunning and hopeful news last evening. One of our very best friends, who is also immunocompromised, someone I grow for, had Covid-19 and has recovered. We knew she was sick back in March, and we kept telling her to get tested. Of course, she couldn’t get tested at that time, due to our government’s inept response. She rode this virus out on her own. It took about three weeks. She got the antibody test results yesterday. She survived. This is great news on so many levels. We love our friend, dear Mrs F, and she got better from this virus. Btw, she consumes cannabis daily, for both her physical and mental health. She consumes both THC and CBD, from tinctures we have made. During the virus, she ingested CBD daily (mostly Jayden’s Juice) and a Rainbow Kush tincture from us, because she figured, “Why not?” Her survival is going to cause us to increase the amount of CBD we ingest proactively every day. This is the best news we’ve gotten in months. If an immunocompromised person can recover, there is hope for others in similar straits.

The point being, it takes some time for the sun to move in the other direction. It lingers for a few days in that peak spot. The sunset has been at 8:39 six days in a row. This drives home the entire “slowing down” perception of summer. It remained in the 60’s almost all last night, so growing barely paused. We are having one of those perfect growing periods.

One of my favorite parts of living near woods is the interaction between light and shadow. Forests are dark places, so when only a small amount of light shines through a crack in the  trees and illuminates a single spot, surrounded by ferns and thimbleberry bushes in dim light, the results can be magical. 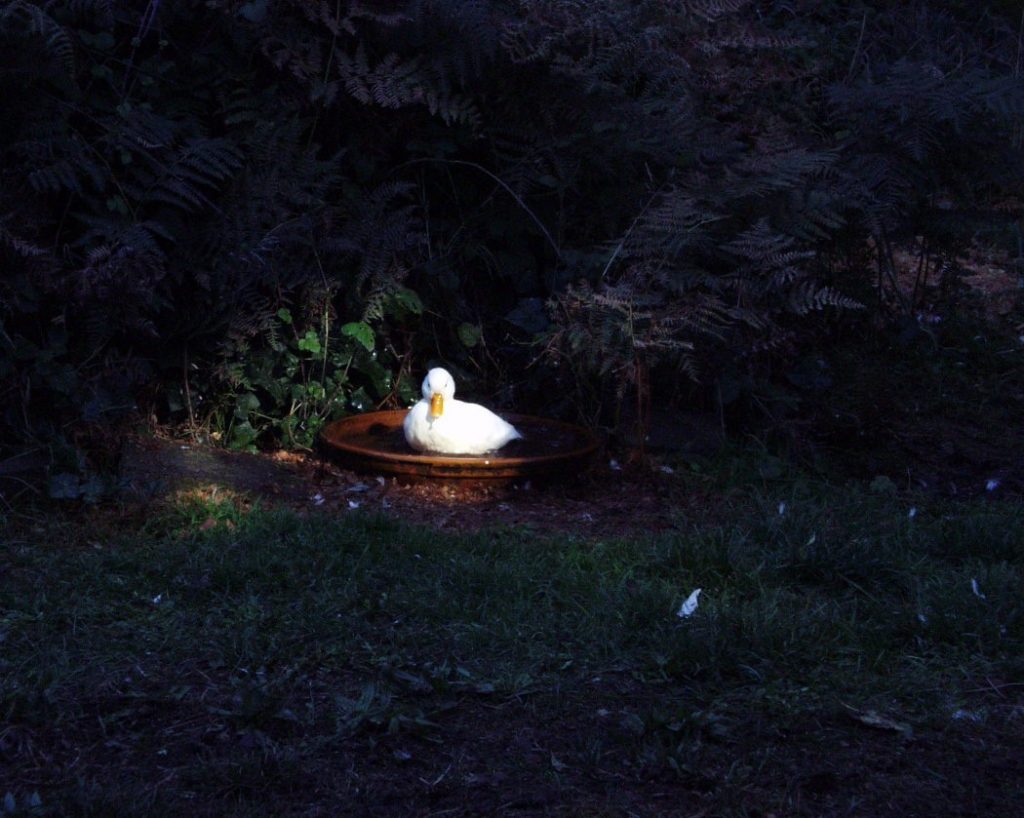 The next six weeks are the peak growing period in my beds. The warmest mean temperature will occur over the next two months. These plants love warmer days (just not too warm) and nights. Sustained medium heat means constant growth. What we have to watch for is sustained humidity to go with the heat. That’s the perfect storm for pathogens.

Speaking of looming events, we are perhaps a week away from the beginning of the annual upheaval that is:  Hickeys vs Squirrels

Brenden took this pic up the hill. There are plenty of plums in several trees, but one tree is clearly showing off. Historically, these are sweet. We’ll certainly eat as many as we can, but I am aiming for a fair and equitable distribution between us and the critters. My teas demand these plums. Between these plums and the crab apple tree next door, along with whatever pluots land on my side of the fence from another neighbor, I’ve got a fresh supply of simple sugar for the compost teas. I see plums beginning to turn. Once they begin, they will all turn soon. The squirrels know this as well. I hear them making their plans from nearby and above. They won’t even have to work hard for these, or have far to fall when they get hammered from rotting fruit.

Here’s a plant update on AC/DC 22: This is one of plants that tried to flower as soon as she hit the bed. She got stripped of every beginning flower and hair. There wasn’t a lot to strip, but it was everything. It takes a plant a couple of weeks to figure out where it is going to grow next, whether it is veg or flower. The super high nitrogen teas forced her back to veg growing and while this won’t look like much to you, she is now in full sprint, and I am excited to watch and document her attempting to catch up with the other plants over the rest of the summer and fall. Because she is auto-flower, she may not be harvested until November, so she has plenty of time. 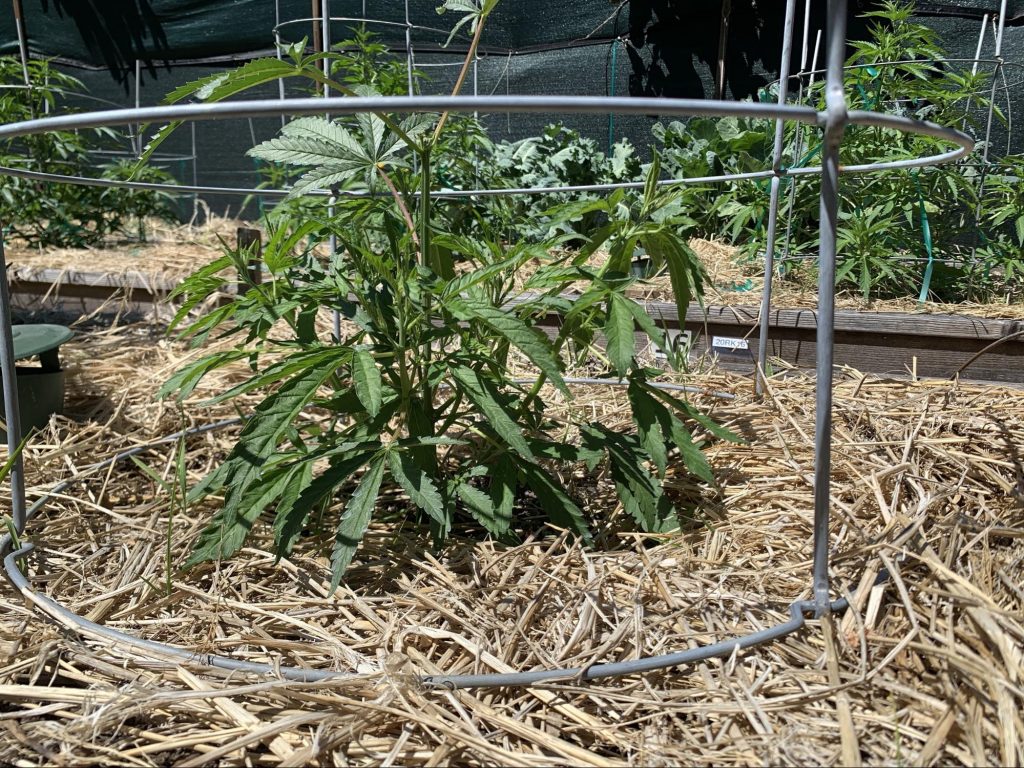 Similarly, there is another early flowering plant, Shiatsu Kush. Her attempts and subsequent conversion back to veg growth caused early inner crowding. So Brenden got inside and trained her as apart as she could be at this time. The entire top of her has been removed, and after pruning, we revealed what will become the core of her growth. All that underneath stuff can now grow straight up and branch out from above. Each of these young tops coming up will eventually be the basis for a lot of flowers. We will obviously be doing a fair amount of pruning, though less than you might imagine. As these stalks grow, they will naturally separate a bit from weight. In addition, they will be trained apart. You’ll see. 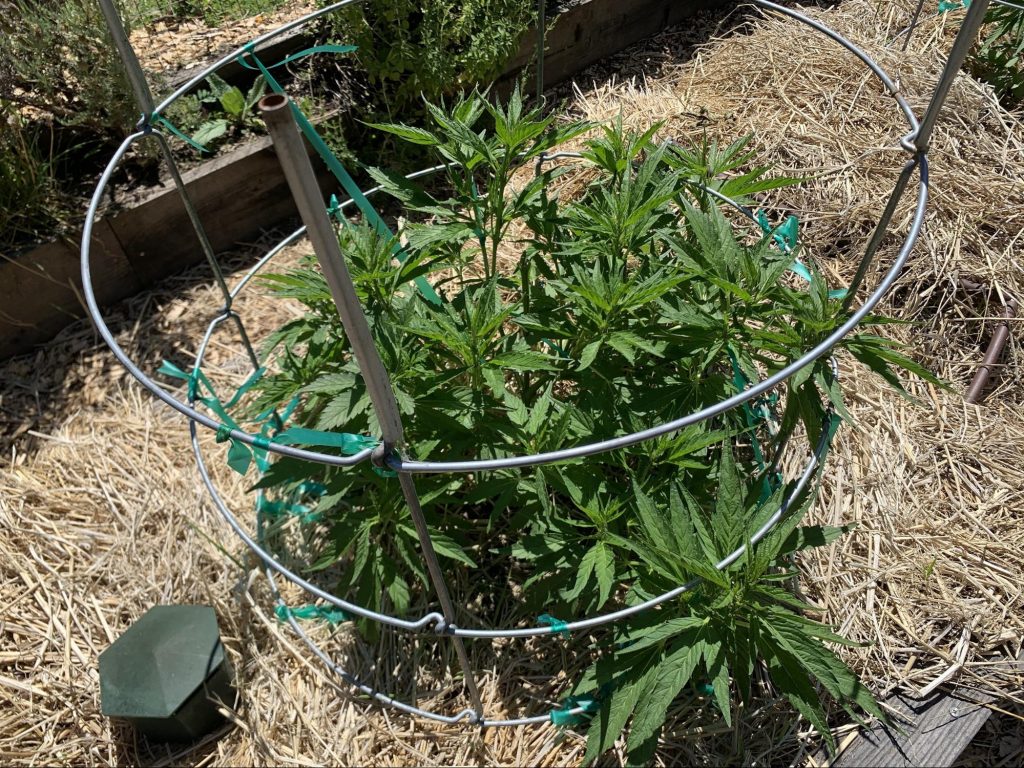 We did this technique properly for the first time three years ago on a local cultivar. It was a game changer. My take on plants that try to flower early is that after they revert back to veg growth, these plants tend to grow with a vengeance through flowering. Statistically, some of our most potent cannabis has come from plants that attempted to flower early. Not our most potent, but three out of our top five tried to flower early. I have no scientific reason to think there’s a connection. It’s just an interesting coincidence. For now. I’ve only had two auto-flower, ruderalis cultivars (both Harlequin clones) that simply would not be denied their desire to flower. Both of those clones had more CBD than any Harlequin we’ve subsequently grown from seed. In that case, it seemed to not hurt the medicine to finish early.

I topped the two tops on RG 11. In part, this was to slow down her upward mobility, and encourage growth from below to fill in the gaps. I’m inspired by the extra topping on RG 5, which is producing new veg growth along the bottom. If I did not top this plant again, I think her tops would be at my eye level in about a week. It’s still June, so that is tall for now. One other thing going on is above those tops sits an active spider nest. Eggs are in a sack, waiting to be born. Mom guards the nest and I’ve already seen her wrapping a wood boring beetle for her family to consume. Good spider. This is the same plant you can see me putting in the ground in a video on the Planting Day post. That was almost a month ago. She is growing fast.

This is my spider wrapping a bug expression

Just finished Regalia spray at 6:20, about 40 minutes before first light hits the beds. There’s a low marine layer, but anyone waiting to delay spraying this foggy morning is a fool. The sun will burn through and hit the beds exactly on time. Still only a two gallon spray, with plenty leftover for zucchini, broccoli, and a few others with large leaves. Finding out Regalia is a translaminar application is a time management game changer. Not having to spray both sides of each leaf cuts down the time it takes to complete the spray.

Next up is brewing another tea. Today’s ingredients will feature horsetail, kiwi and this year’s favorite addition for microbiology: fresh suckers off our buckeye tree. We’d be pruning these low growing suckers anyway, so while they are young, bright green and particularly full of juice, it’s the perfect time to cut them into a veg growth tea. I’ll add lemon verbena and mint again.

Very cool discovery this morning: Right now, the first plant to get light in the morning is RK 16. This is unusual, because that bed is in the middle row, closest to the fence that borders the wood shed. Typically, this is a bed with access to direct light coming after the sun has risen above our Japanese maple tree. But right now, the sunlight sneaks under a branch and directly hits the top of that plant, activating her day. This is how our plants get tricked into a full growing day, even when some do not get a sustained 12 hours plus of direct light.

It has been a challenging last few weeks for everyone I know. I anticipate the emotional challenges of what we face as a country, along with what we all face as a species, to become more acute in the months ahead. Cases are spiking again in our country, and in my state.

Karen and I aren’t going anywhere. We’ll shop online with local stores for whatever necessities we must, but other than that, the only solution for us is to remain here and keep doing what we’re doing. Karen has been a bit flared up this week, and I shouldn’t be too surprised. Stressful news impacts immune compromised people. Increased stress usually equates increased pain, and that has been the case here this week. My new motto is: Survive and Vote.

Despite all that, this week brought positive news for our very good friend, Mrs. F. That she survived while being severely immunocompromised, and did so without leaving her home, is extremely hopeful and inspiring. We will not drop our guard as a result of this news, but my purpose will trend toward feeling renewed, because one of us has survived.

Stay safe everyone. Things are going to get worse before they get better, but they will get better.