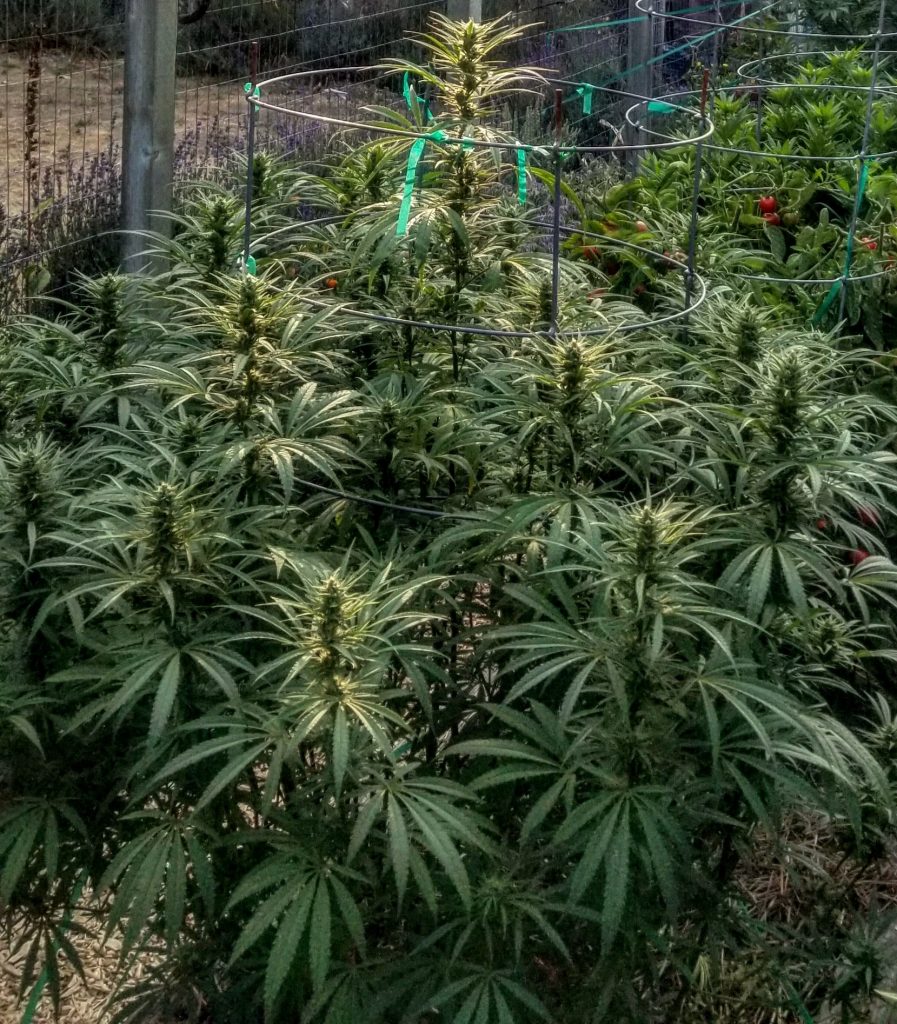 This is ACDC 22 catching an evening ray of light through the trees.

First of September means it’s a BT day. Approximately ten young worm nests were found yesterday, so the white moths have been active during the fire. As every plant is flowering, worm outbreaks will not be tolerated or treated kindly. After Bee pointed out the number of worms seen, we concluded I should spray immediately. I gave the crop a 4 ½ gallon spray late yesterday afternoon, and I’ll give another 7 gallons to the plants today, starting the spray at the other end of the beds. With two sprays, I’ll feel relatively confident that I soaked most of the plants. 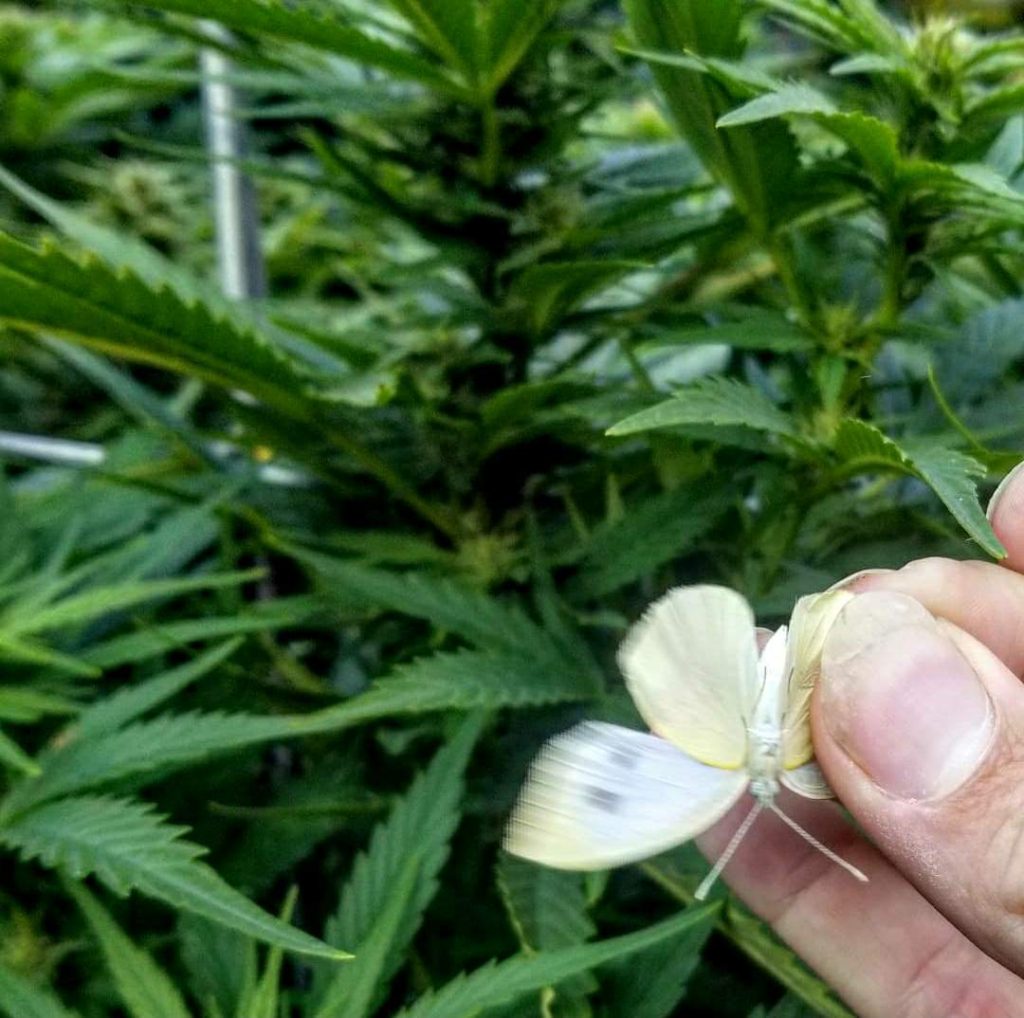 This moth was captured even before gloves could be put on.

After this spray, we’ll be inspecting closely to capture any dying and decaying worms, and to look for any sign of powdery mildew emerging. During the week we don’t spray Regalia, if we see any pm, I’ll fire up the Neem.

We are entering the hand-to-hand combat phase of the grow. Daily inspections are mandatory. This is the period of intimate gardening. As much as we try not to touch the developing flowers, the only way to examine is up close and personal, wearing nitrile gloves.

These are the days of grabbing white cabbage moths in mid-flight and depositing them in one smooth motion under about ten inches of soil. With flowering plants, cabbage moths are the primary enemy. I can ignore them a bit during veg growth, but not now. 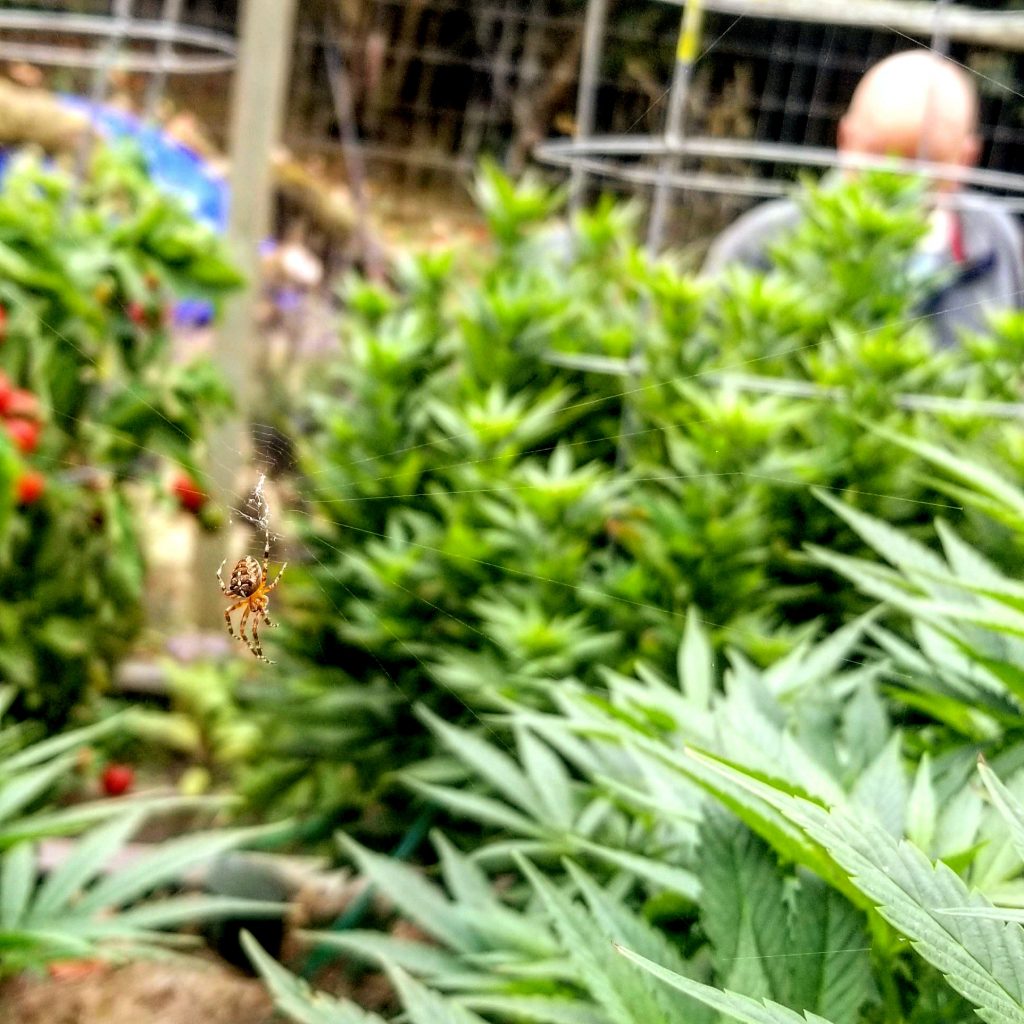 This orb spider is literally building a web between two plants, Bubba God and Sour Tsunami.

We are especially examining every flower top developing. The following photo shows how a top looks when a worm has bent a leaf near the flower. If any worms were allowed to remain this close to a developing flower, there would be a high likelihood of leftover scat developing into mold that would eventually require the surgical extraction of said mold from the flower, or the removal of the entire flower. Both solutions are rather commonplace. 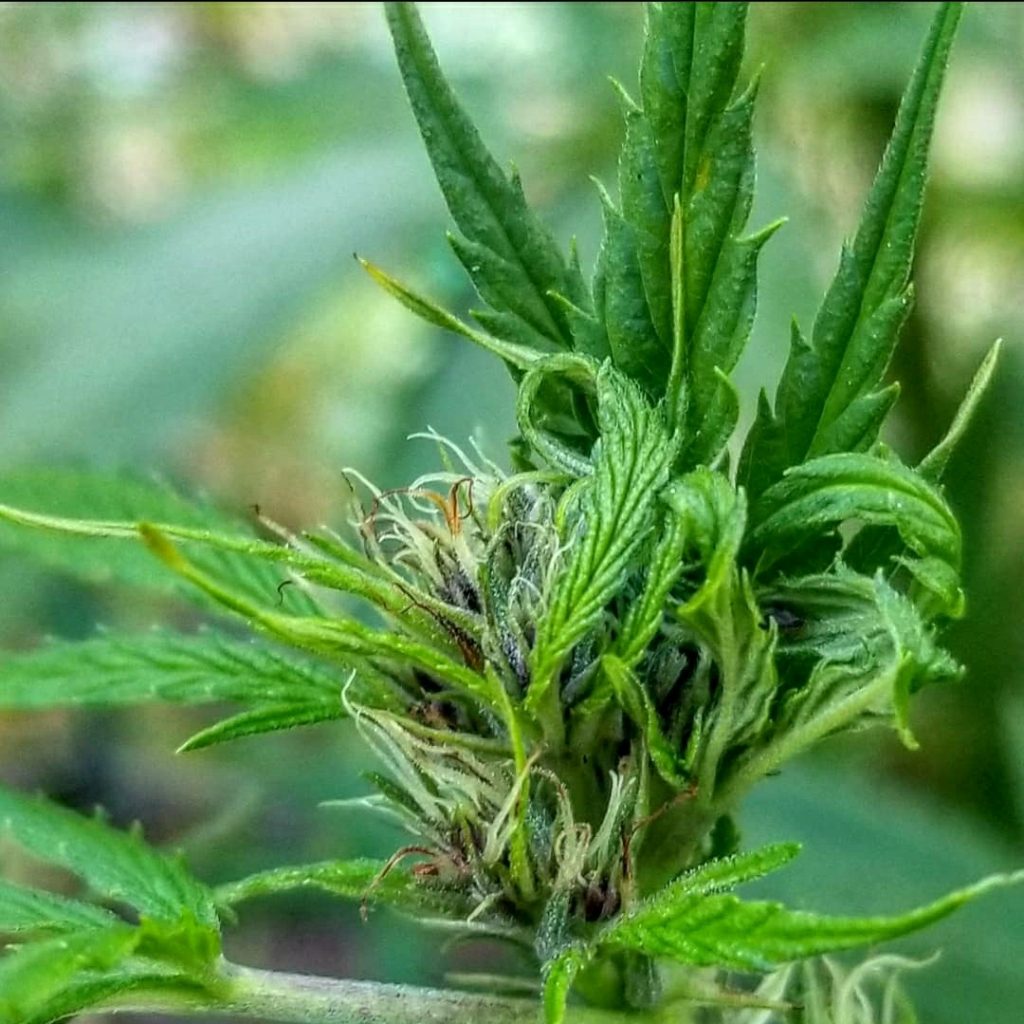 Note the leaves curling in on the worm home. This is a sure sign something is eating, or is about to eat a flower top. The critter was removed without any damage to the top and the leaves will return to their normal state.

Meanwhile, in the next photo, we have the logical conclusion to the three blog saga of ladybugs on RK 18. Two blogs ago, I noticed there were many ladybugs present on that plant. In the last blog, I noted and documented how that plant seemed to be serving as a popular destination point for ladybug lovers. The inevitable conclusion to this summer of love in the isolation and smoke, is evidenced by this remarkable photo: 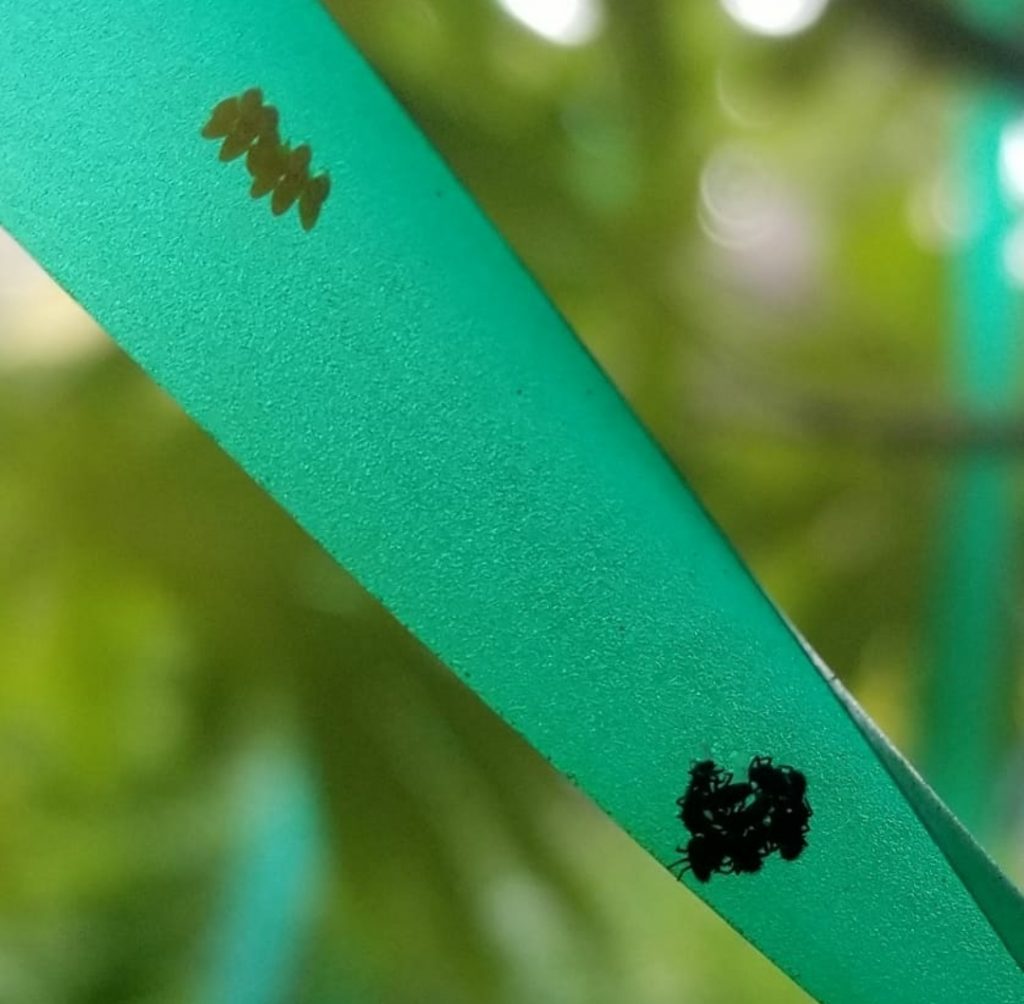 On the top are ladybug eggs, and on the bottom, ladybug babies. Their nursery is plant tape. 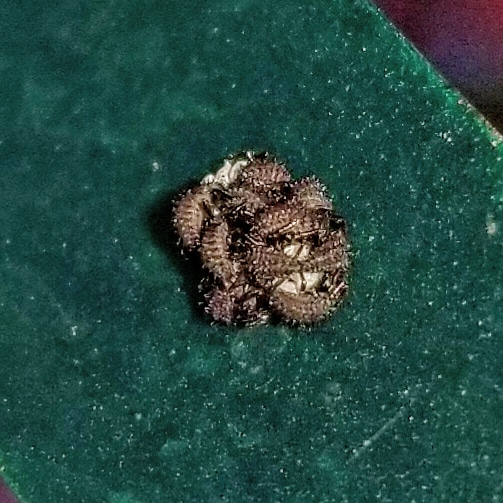 These are baby ladybugs. Not what I thought at first glance.

Fire containment is at 41% this morning, which is certainly good potential news. All of that containment, to date, is on the southern and western sides of the fire, which are essentially opposite of where we are. The greatest risk potential for this fire would be to jump the northeastern line and move toward communities and structures. Firefighters are attempting to box the fire into a zone where it simply burns up its fuel, while waiting for rain to put out what remains. We are being told they cannot just “put the fire out.” This is burning terrain that has probably never seen fire prior to this event. The amount of fuel in these wilderness valleys must be overwhelming. While it is unsettling to think of a fire so close by simply being allowed to burn, it sounds like there isn’t much choice in the matter. We’ve heard that fire retardant cannot even reach the ground in some locations of thick foliage. All fire can do in spots like that is burn. 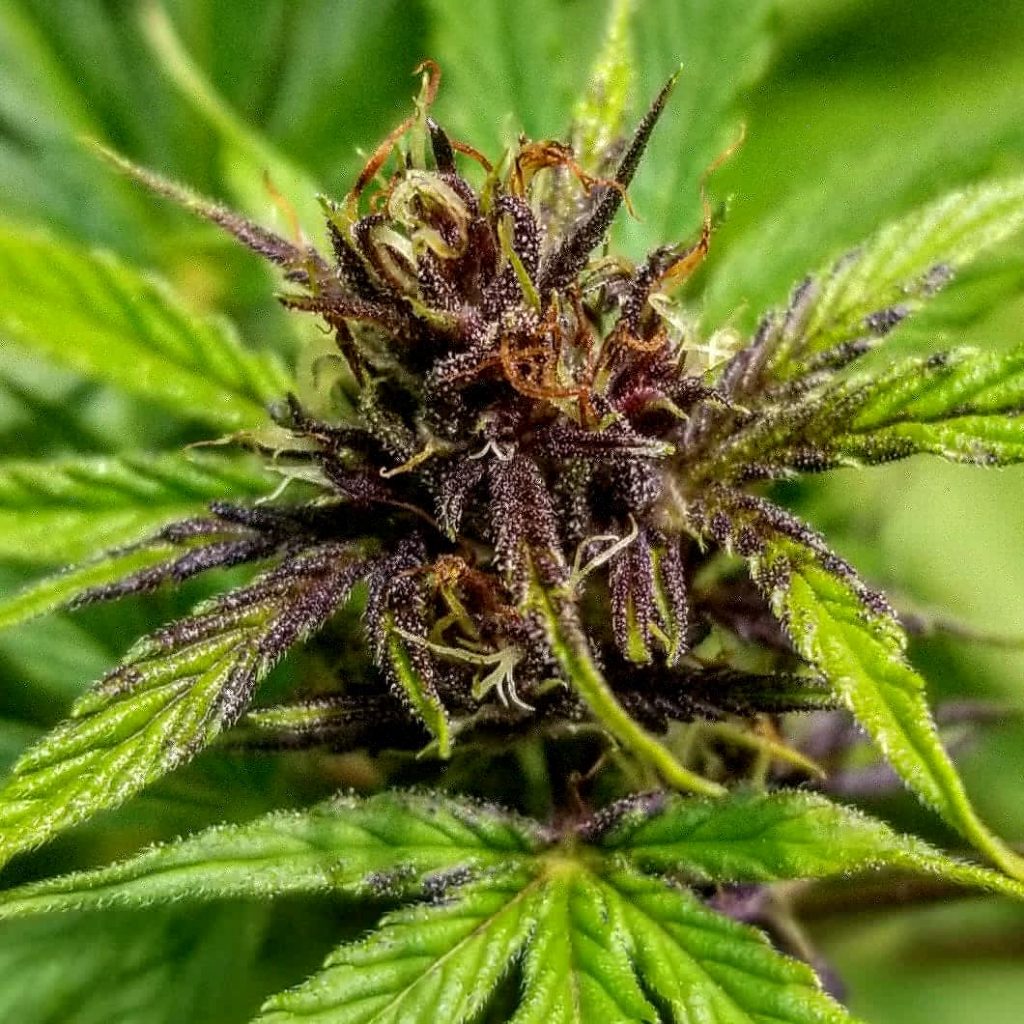 When plant inspection reaches this stage, and will remain at this stage through the harvest of each plant, gloves are worn whenever work is to be done. Our hands are covered with bacteria, and I don’t want any of it adhering to a flower. As much as possible, I want the flowers to be pristine when we cut them down. You can’t have pristine flowers if you’re ham-fisting them with grimy meat hooks. 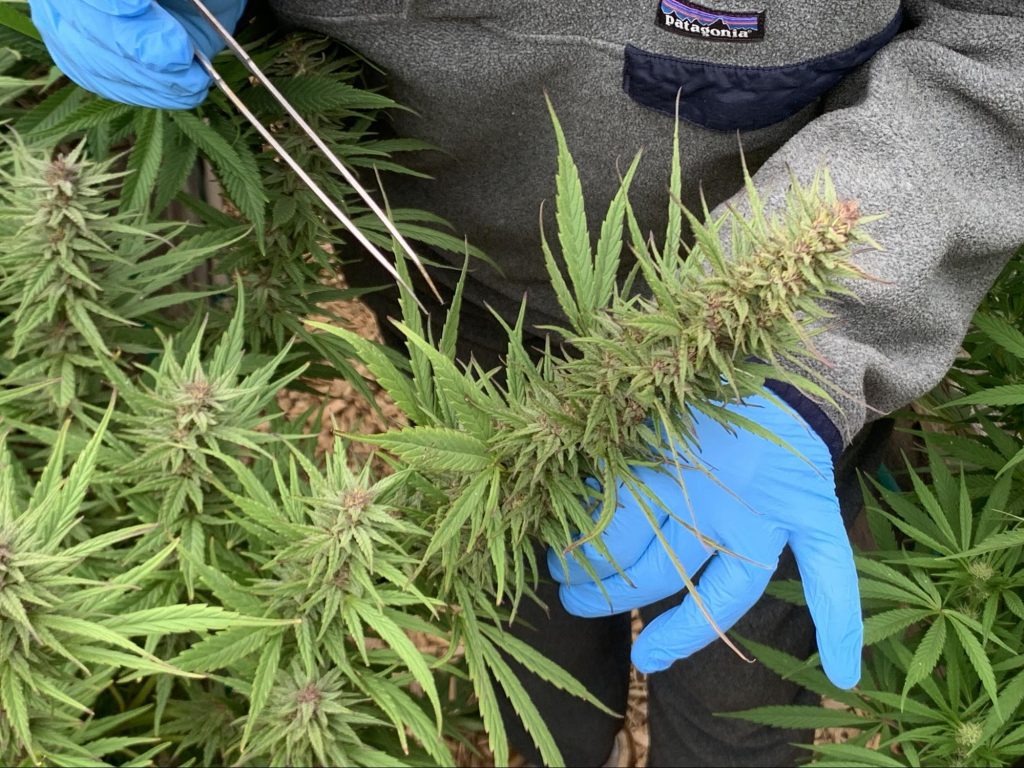 Essential equipment in this photo: gloves and tweezer. Extended pinky is for style points.

When inspecting each stalk, learn to use older fan leaves for grabbing and pulling the flower away from the rest of the plant for inspection. If the leaf has trichomes on it, find one that does not, and use that as your grip. If you pull it away from the mass of the plant, you should be able to look all around each stalk without touching the developing flower. If you see debris from another plant, or perhaps a gnat stuck dead to a sticky bud, you can use long handled tweezers to carefully extract the unwanted bit. I hate to see a flower that has obviously been in the palm of someone’s hand. Trichomes can be damaged.

I’ve mentioned that evening is my favorite time for inspection; and especially for powdery mildew checks. This pathogen tends to visually pop in diffuse evening light. Sometimes, I’ve discovered this pathogen needs a little persuasion to show. So on particularly crowded plants, I like to separate stalks, lean over the leaves and breathe on them. I can’t count the number of times the heat of my breath has revealed powdery mildew. It must be the garlic.

7:16 pm—THE EVACUATION WARNING HAS BEEN LIFTED FOR OUR AREA.

Not all the areas out here have been lifted yet. But our area, even though we’re less than six miles from active fire, has been removed from the active evacuation warning.

We aren’t going anywhere. We’re going to stay home and bring this crop in. Doggone, this feels great. 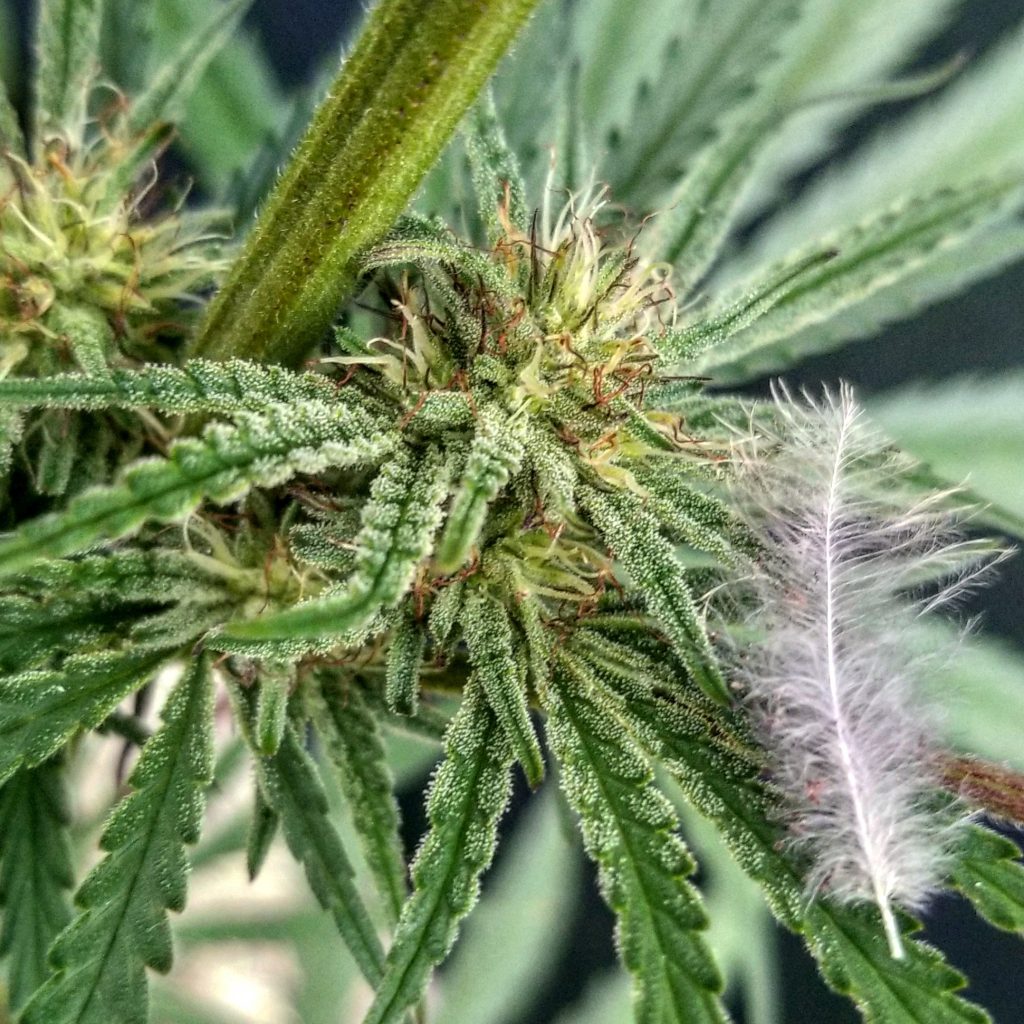 ACDC 7, day 24, showing frost and feather. Great example of what can land in a developing flower. 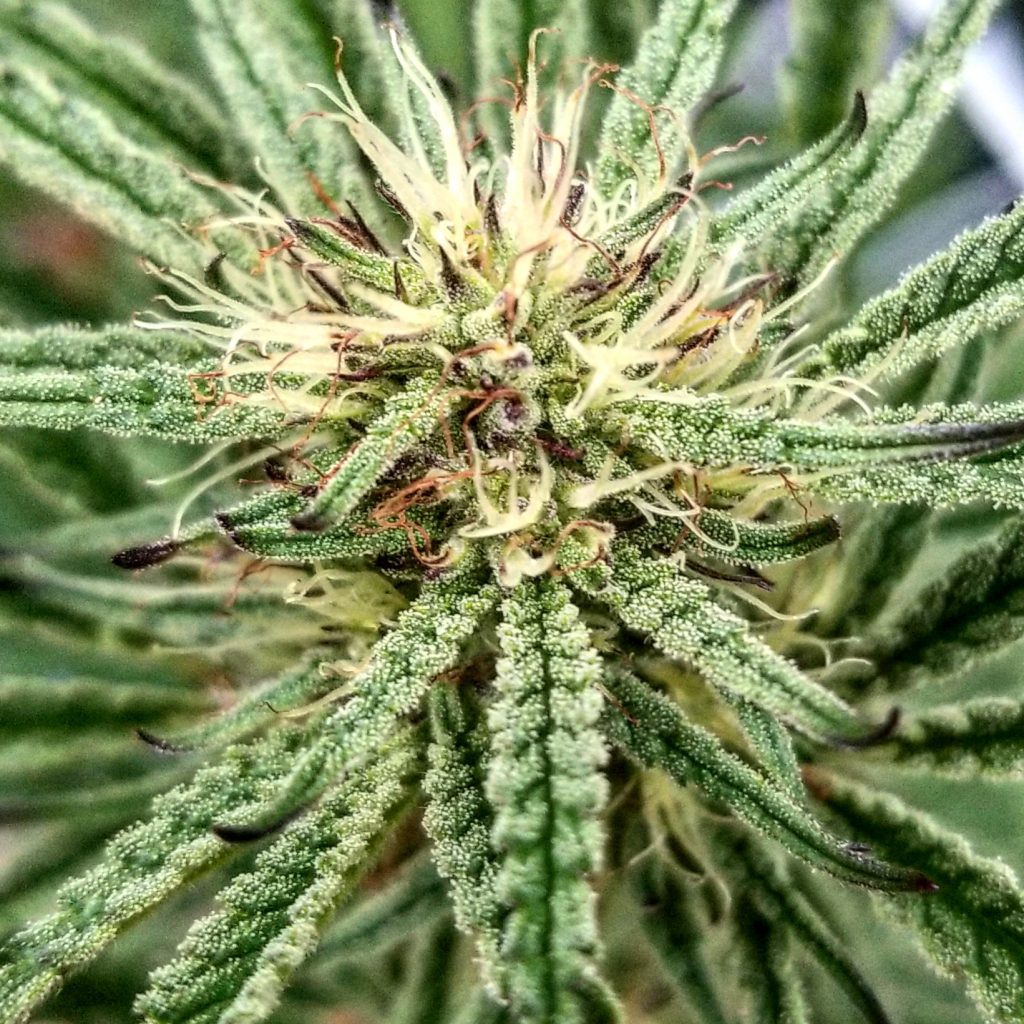 More sugar from 24 day old ACDC 7, cuz you really can’t have too much sugar. Or kief.

Woke up this morning to a fine, falling mist. Water is dripping off our roof. This is the kind of mist hard enough to tamp down a fire, apparently. Such a relief.

So we’ll unpack today. Not everything, but a lot. The EtOH processor will return, and probably be back to work in short order. There is still a good deal of last year’s flower to process before the heaviest part of harvest next month.

And speaking of harvest, Shiatsu Kush is now at day 50, so we’re about 10-14 days from the first plant coming down. I’m excited to soon harvest this plant again. She is the first of her kind that we’ve grown to show so much purple in the tops. And it’s not purple caused by colder temps. They just grew purple. These are some gorgeous medical flowers. I can’t wait to sample the blissful balance of this cultivar. No paranoia. A couple of hours of productive energy, followed by deep relaxation, and for me, pain relief. She is the perfect plant for twilight. 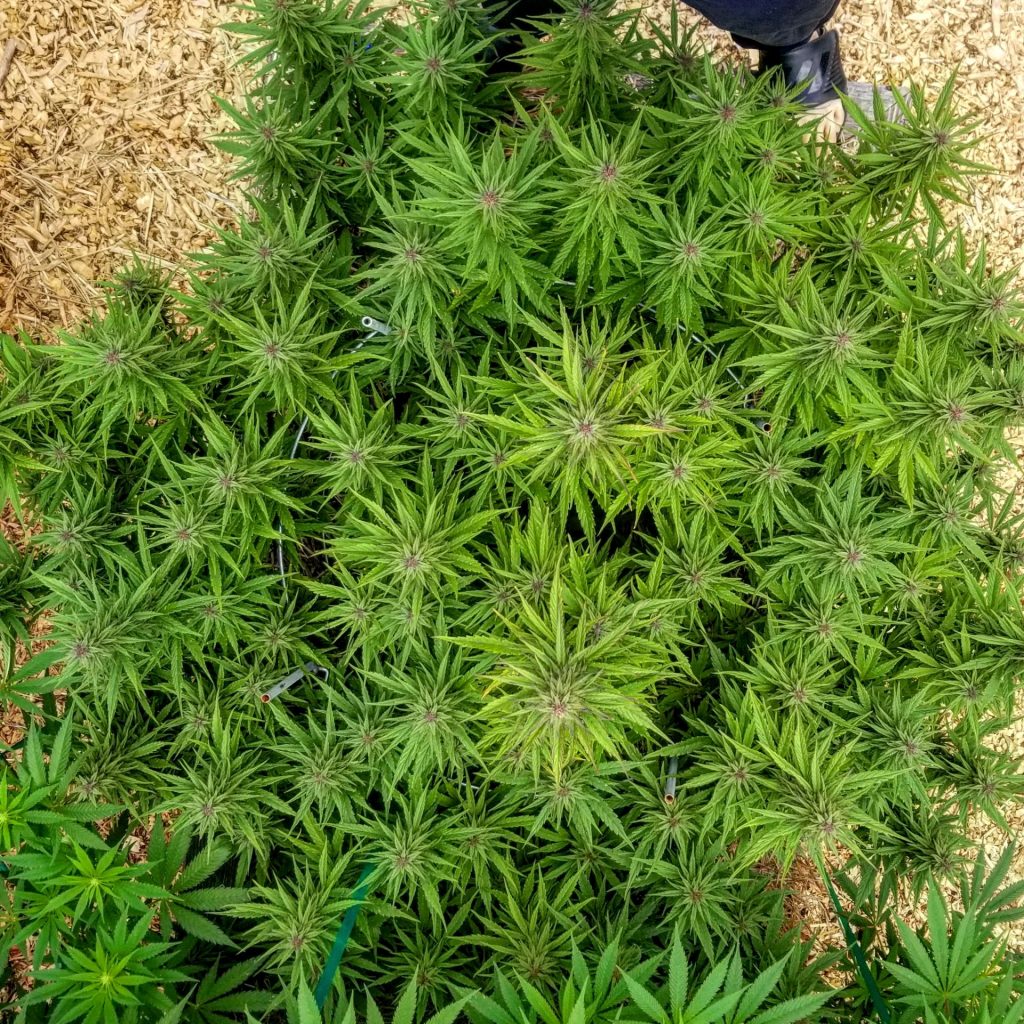 She is in her final two weeks before harvest. 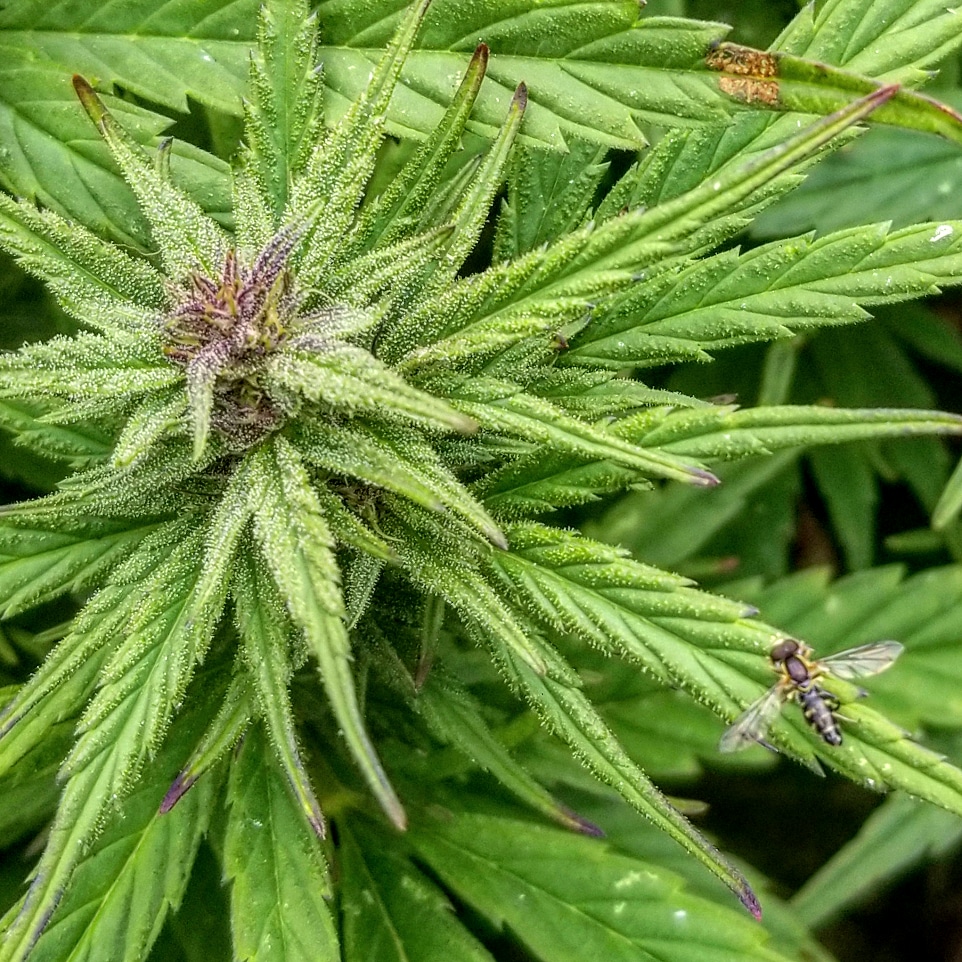 Shiatsu Kush being guarded by an American Hoverfly.

A plant I’ve mentioned several times in this blog, and have shown spectacular photos from last year is CBD God. This is supposed to be a 4:1 CBD to THC plant that leans toward being more relaxing. She had less than 1% CBD last year, but a healthy 17% THC, which made her very pleasant, but not exactly what we were looking for. However, there’s nothing wrong with how this cultivar makes you feel, with or without the CBD. And she is one of the most beautiful plants to grow in our experience. She’s the first plant we’ve grown with so much pink. 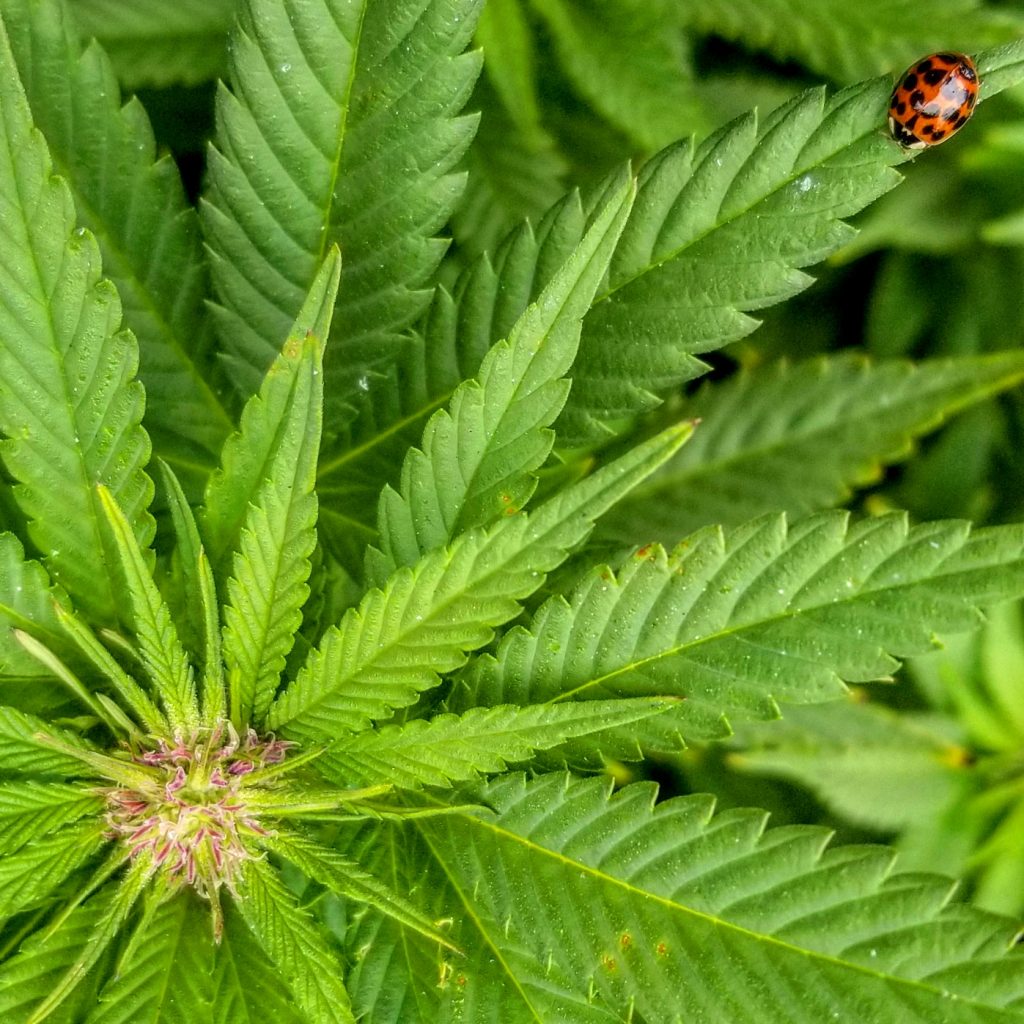 Documenting flower development on this plant will be a pleasure. A ladybug patrols. Note the specs of fire ash.

I admit to being joyfully distracted today. The relief we feel is profound. The worst of this event only lasted a little over two weeks, but the net impact of going through it is akin to being an overwound yo-yo. Once released, you spin until things settle.

There is a giddy quality to this relief. I walk around smiling like a 7th grader who just played a prank. Like we’re getting away with something, and perhaps we are. No structures have burned, though there are many still threatened in the remaining evacuation warning zone. Homes of friends of ours are still in danger. I’ve reached out to other growers I know, offering my drying room in case any of their plants need to come down early, and they can’t safely access their own drying rooms to keep a plant drying there for days unattended.

The last two weeks have been instructive. We know we live in a fire zone. We pay for the insurance we need to protect ourselves, and rebuild if we must. We have paid the price, so we roll the dice. We live here full of delight, with eyes wide open about the risks of being so close to pristine, virtually virgin coastal wilderness. Living here is a privilege, growing here is a joy. The risks are worth it. From where we live, with the right kind of eyes, we can almost see better days ahead, for you, for us, for America. Survive and vote. See you next week. Peace unto you and yours. 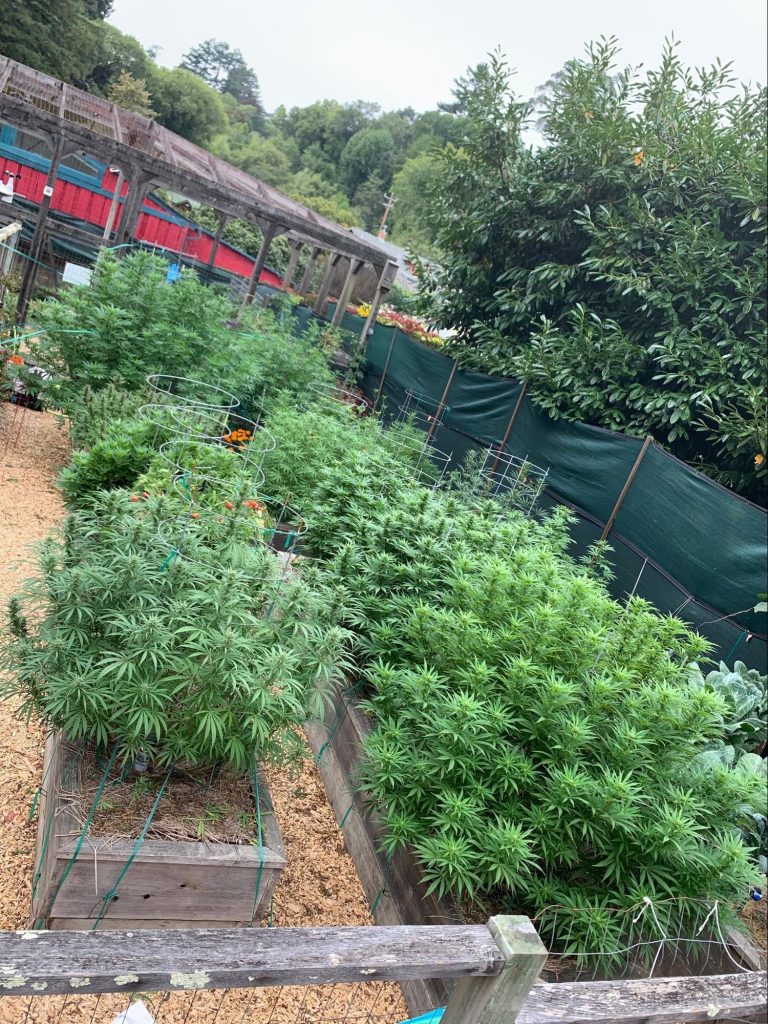