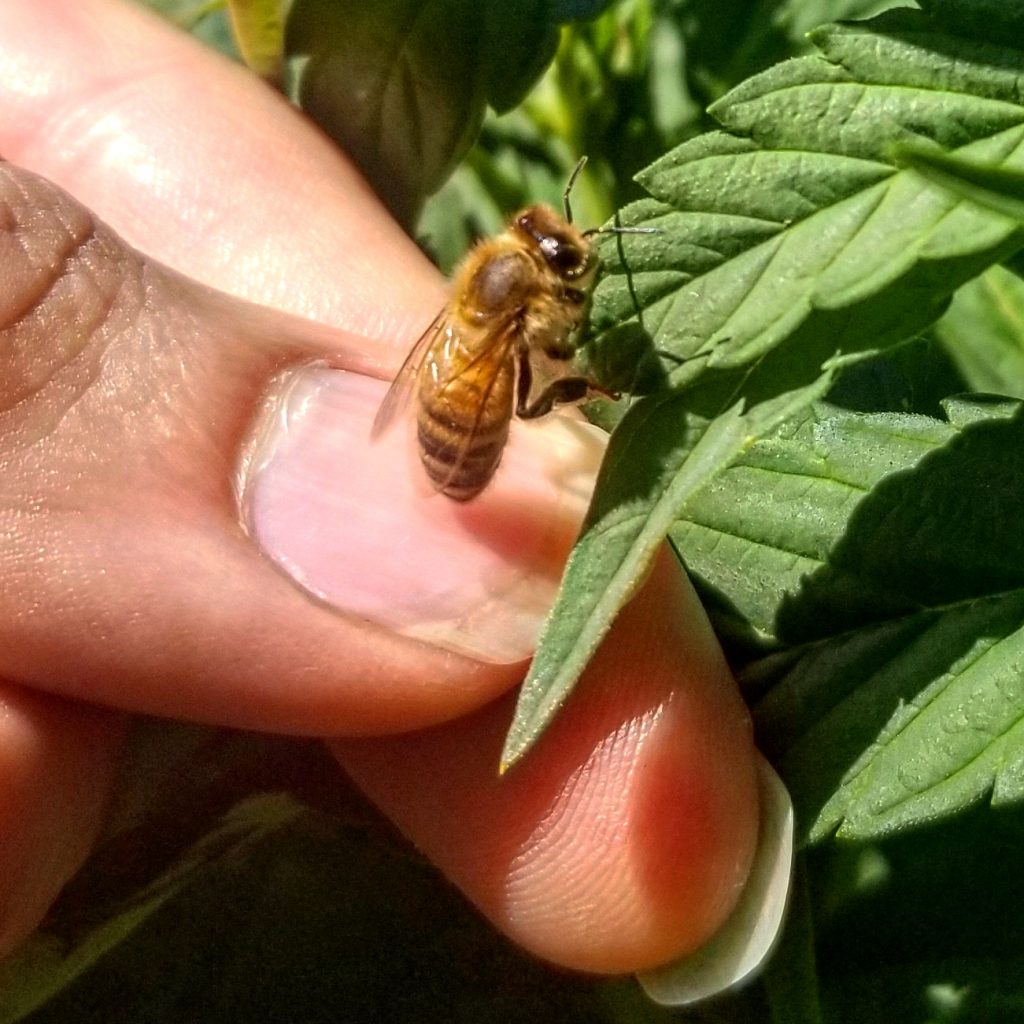 We understand that as our plants mature, and especially through the flowering period, we will have more bees inspecting the cannabis. We expect that some of them, both honeybee and bumblebee, will take long afternoon naps on fan leaves. This will become especially so, once fan leaves start developing trichomes. As you see in the photo, they are tame around us while interacting with the plant.

Bees do not have cannabinoid receptors, so science tells us they are unable to feel any effect from cannabis. But they are certainly attracted to the plant, and our experience is they seem to become more attracted as the plants flower. It is speculated it is the sticky pollen, and while that makes logical sense, we’ve never seen bees do anything but nap on our plants. It’s curious we never see them nap in the middle of the day on any other plants. The bottom line for me on bees and cannabis is this: There’s a lot we don’t yet know about baking and bees. We certainly enjoy seeing them hang out and nap. They are a vital component to the synergy of our entire garden.

This evening, I had the brief privilege of watching a fledgling bald eagle take what looked to be it’s first longish flight from a nearby nest. It is almost as large as its parents, but it will be years before the white head and tail emerge. You could tell how inexperienced it felt by the way it banked. Very unsure and wobbly, but gliding and accelerating did not seem to be issues. This might have gone on for a while, but something spooked the nearby parent and the two headed back toward the nest at some speed. I saw nothing threatening them before they disappeared from view. Bald eagles only returned to this area several years ago, and they are most welcome. They are an awesome bird to watch.

Because of having one plant start to flower, I snuck a half cup of Bloom formula into today’s teas. The next teas, it’s a full cup. Walking around the beds this evening, the plants most affected by today’s tea were obvious. RK 18 is going off. This is one of those plants where the stems remain thick, light green, and still very flexible. This plant is the most veg looking of all the plants in the beds; except, perhaps, for ACDC 22. I’m going to be gushing about this ruderalis, because her growth is so exciting. She is beginning to lengthen on a few of her suddenly many tops, and though she is not going to be gigantically tall (too much removed from early flower), she will be tall enough to be effectively wide. The training is giving her the open space for free growing. When I looked at pictures of this plant a few weeks ago, and now . . . I am full of hope.

Fox update:  We have a mama and two kits. We saw them all this morning, including the kits wrestling over what appeared, at a distance, to be a mole, which possibly had only just ventured to the surface of the earth, from deep beneath the soil, for the first and only time in its brief life.

Proactively adding a Regalia foliar spray this morning. I think spraying two times a week is wise. Humidity is lingering longer every day, as the marine layer retreats from the coast later each morning. It has been close to noon the last two days, before the sun fully broke through and sent the wispy clouds in full retreat. But the fog lingers at the coast and returns earlier each night. The transition to a more consistent humidity appears to be happening.

The following photographs are of an egg nest found on one leaf. They usually lay only one egg at a time, so this was something (probably a butterfly) that sat there for a good long time, read the newspaper, would have loved a latte, but instead, laid egg after egg for however long it took. When Brenden found this, they were just starting to hatch and crawl around. 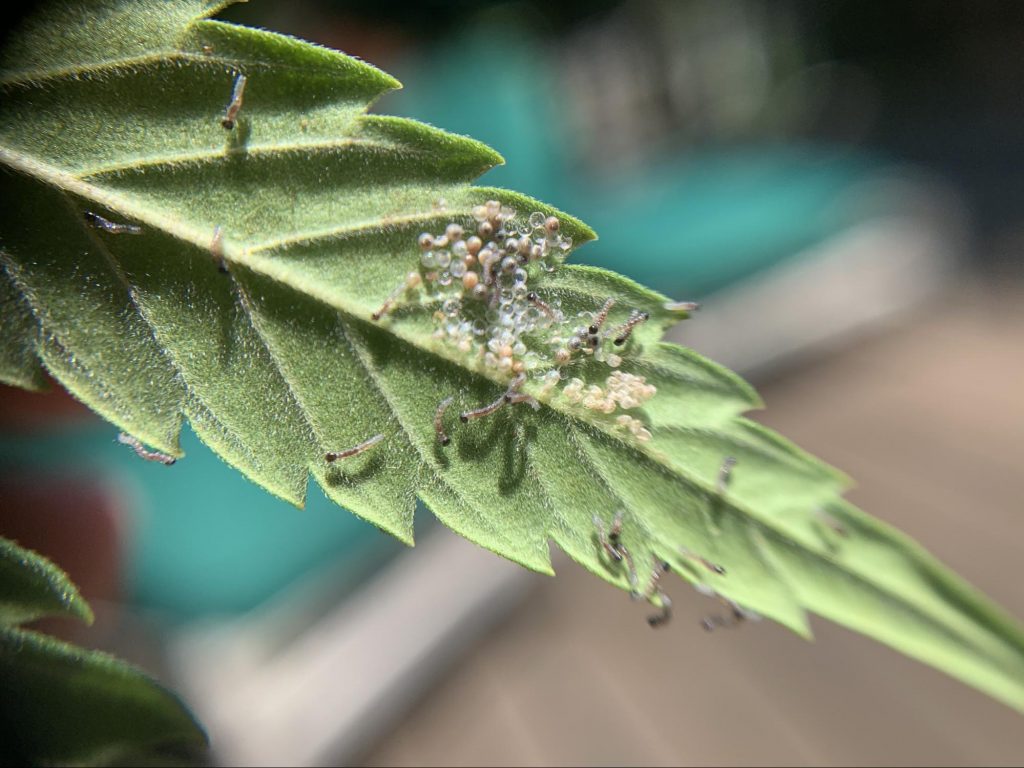 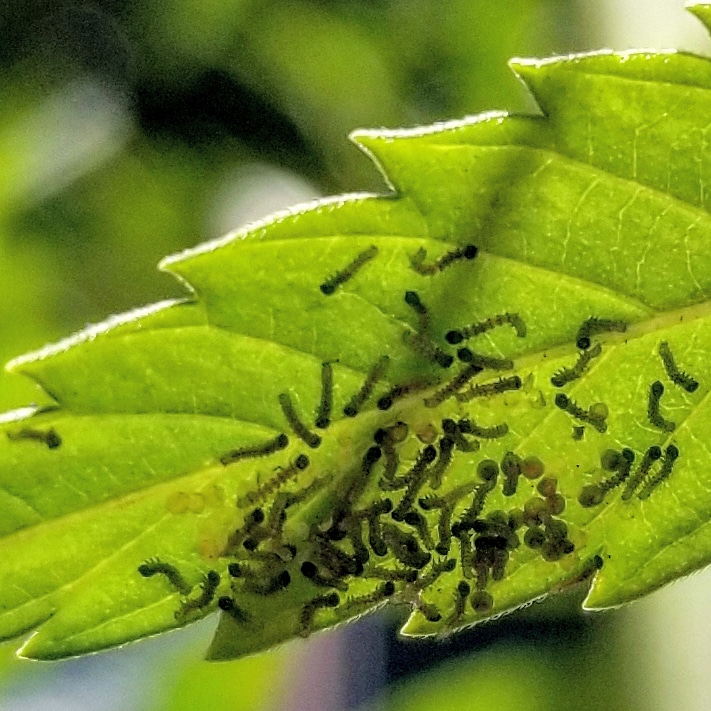 “My love, would you pass me the BT, please?”

It’s almost 11:00 this morning and it’s so overcast, I could have waited until now to spray.

Discovered on Friday that the surge protector I’m using for my compost tea is failing. Given I’ll be brewing twenty gallons (two batches of ten gallons each) next week, I need the power problem fixed. I’ll have a new surge protector by Tuesday.

When I walked out to the beds a couple hours after spraying this morning, I found a new group of Scrub Jay fledglings being trained by their Mom to land on our tomato cages and hunt for cucumber beetles. Also discovered that we have two new bird bug catchers in the beds. The adult Northern Black Phoebe is doing her work and for the first time, I saw the tiny Oak Titmouse underneath the Sour Tsunami, furiously eating sow bugs. I had seen the efficient Phoebe in our beds before, but never the petite Tit Mouse. Both are furious bug eaters and are excellent companion birds for the garden. The Phoebes are relentless bug catchers.

I walked up our hill to gather plums for tomorrow’s tea and I had to interrupt a deer conclave. Three youngsters, two mothers, one youngish 4 point buck, and one fully mature 4 point buck, who was shaking the plum tree by its antlers, while the others greedily ate as many plums as they could stuff. It was my turn and they knew it. They mosied off, but remained in eye contact. They resumed as soon as I left. The squirrels are still getting their fair share, so they sit in trees and watch dispassionately, at the moment. As the supply runs short, grievances will resume.

There is a hazard to picking these plums, or spending any amount of time currently walking around the plum trees. The hazards are all the plum pit filled mounds of fresh scat. It’s not a pretty sight. As I picked, I could also see apples maturing on the one apple tree amidst all the plums. These are our favorite Gravenstein apples. We have about three weeks to bake as much as we can before the deer get the rest. Pies and crumbles are not far off.

That also means the crab apple tree next door that hangs over my driveway will soon be in play. Just about when I run out of plums for compost tea, I’ll have crab apples quartered and dropped into the teas. Cannabis loves fresh fruit being dropped into compost tea. The simple sugar is like candy for them and usually promotes a surge of growth.

Discovered sleeping inside one of our deck umbrellas: A local bat. The scat below the umbrella was the giveaway. 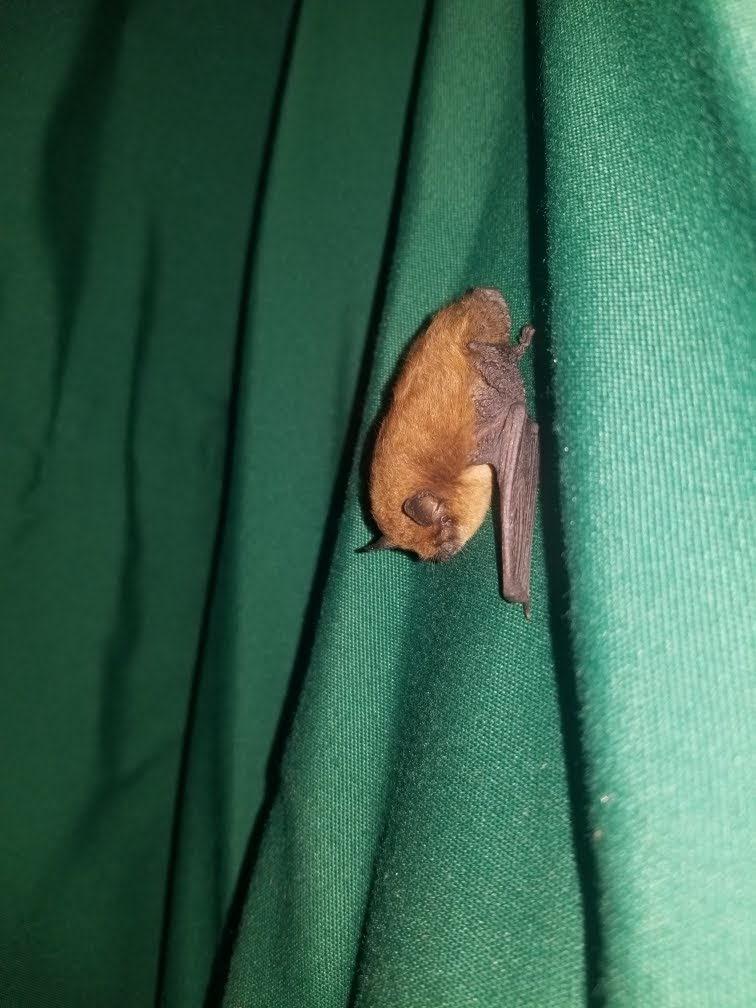 Tea to begin brewing for vegetables today. Pruning for plants.

This morning, a light mist is falling, but it has been falling long enough to have become measurable precipitation. We got our first one one hundredth of an inch. This is all good for the plants, and it provides further proof the weather shift is here.

The mist was alluring enough to make me sit down for a few minutes and observe. At 7:14 in the morning, while humans stirred in their homes, the outside world was fully awake, and I witnessed the following from the scrub jays: Mama and fledgling landed on the double decker cage of RG 11. The mother sat stoically, and seemed to almost nod toward the young bird, who cautiously leaned forward and missed a cucumber beetle. Mother instructed and the two quickly flew to the cage around Bubba God. This time, the fledgling was less hesitant, and much more decisive in scooping the beetle without harming the leaf.

Mom squawked her approval, and the two ventured over to the cage for ACDC 22. They were both about three feet in front of me, and it’s obvious the lack of fear the mother has for me has been passed on to her fledgling. This time, they were both hunting. Mama ate three before the fledgling was just about to swoop on a bug when another jay suddenly landed next to the fledgling, scooped up the beetle and flew off to the crying complaints of the youngster. Mom was not concerned. Her youngster must learn to fend for itself. I also must point out that at least half the bugs I saw them eat were not visible to me from where I sat. While it is true that the beetles cannot do much damage to the plants at this stage of development, they can still do serious damage to individual stalks that will eventually become flowers. Seeing how many are conveniently camouflaged is a reminder to keep squishing as often as I’m out there. I also noticed recently that the cucumber vine these insects look for was removed from where it had been a year ago. I’m sure, however, there is another one close by. They are invasive.

Vegetable tea brewing today. Our purple broccoli needs some bloom formula. Broccoli needs phosphorus and potassium early and often if you want large flowers. I was a little late this year, and the flowers are smaller. 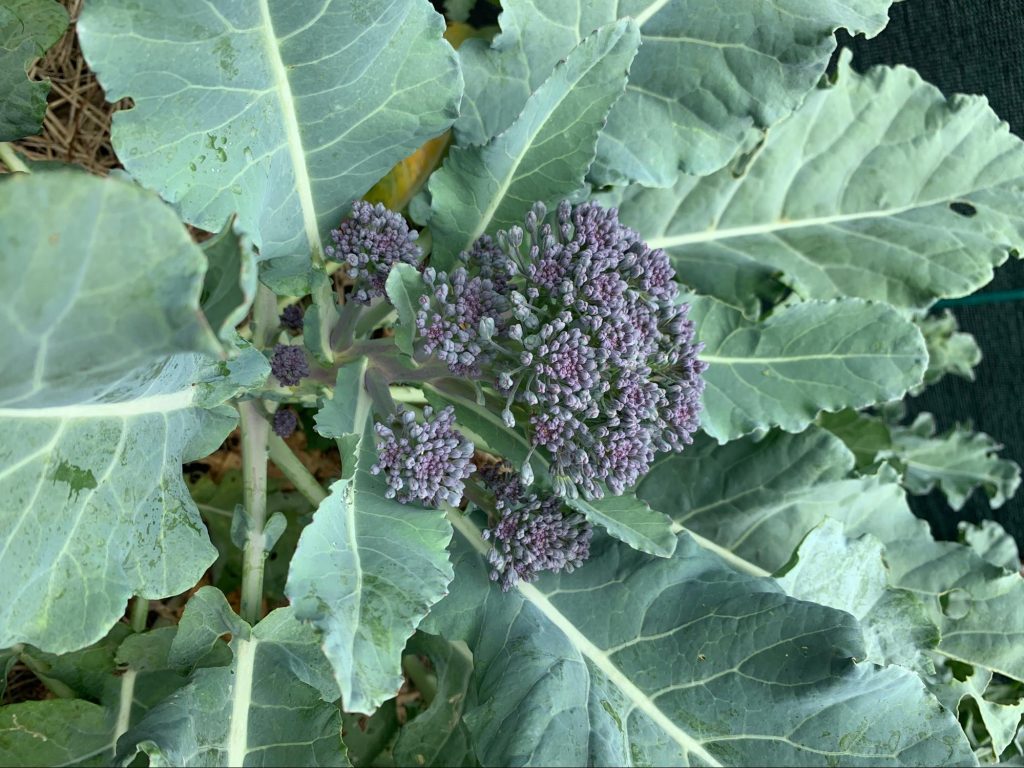 Also, it’s nice to see our idea to use the aviary as a lattice for peas is working out nicely. Grateful we’re no longer building lattices that the peas eventually collapse. The link fence is perfect. 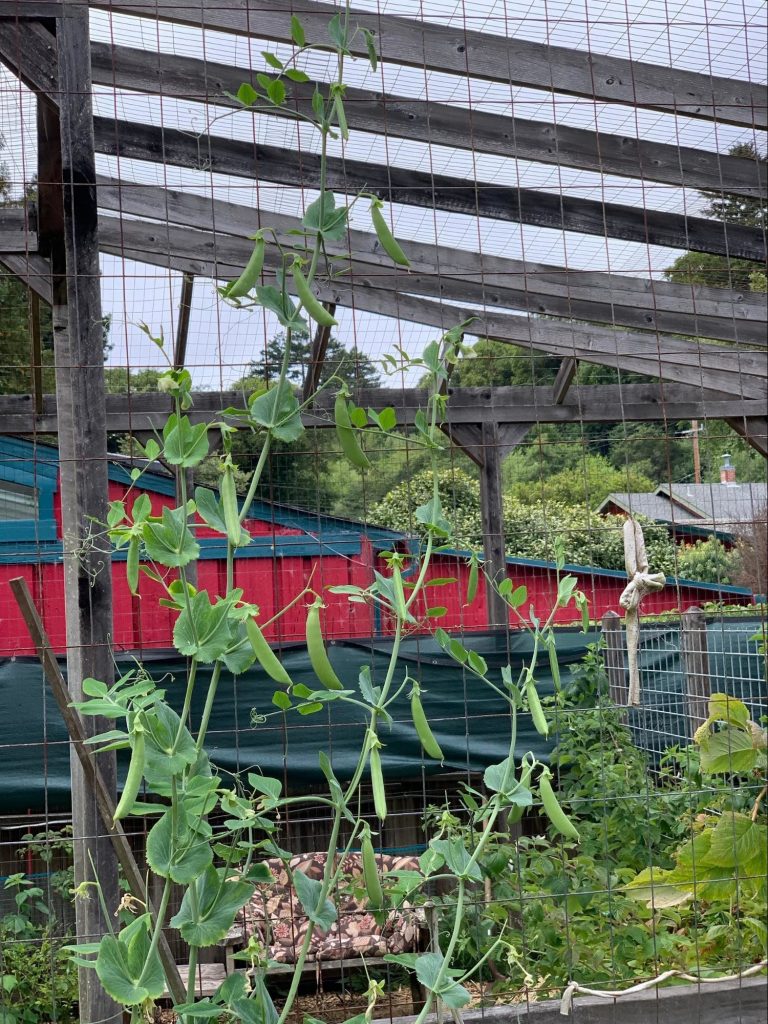 Because we have our first flowering plant, it is beginning to take on the familiar scents of cannabis. There comes a point every summer and fall out here, when one of the predominant smells you encounter on hikes is maturing cannabis. It’s legal here, and I’m not the only person who grows. Honestly, I don’t think I’ll ever completely get used to smelling flowering cannabis while we walk around our valley. It’s a smell I never expected to become so prevalent, and it makes me smile.

I’m reminded of the morning last year, when the odor was close to peak. I had just gotten out to the beds and was beginning my day. From a distance of several houses away, I heard a particular neighbor who does not grow, walk outside and greet someone who was spending the day doing yard work for her. She said, “Good morning! Hey, do you smell that? That smell, that skunk smell. I’ve never lived in a place that smelled so skunky.”

Indeed. I wish all of you a skunky day. 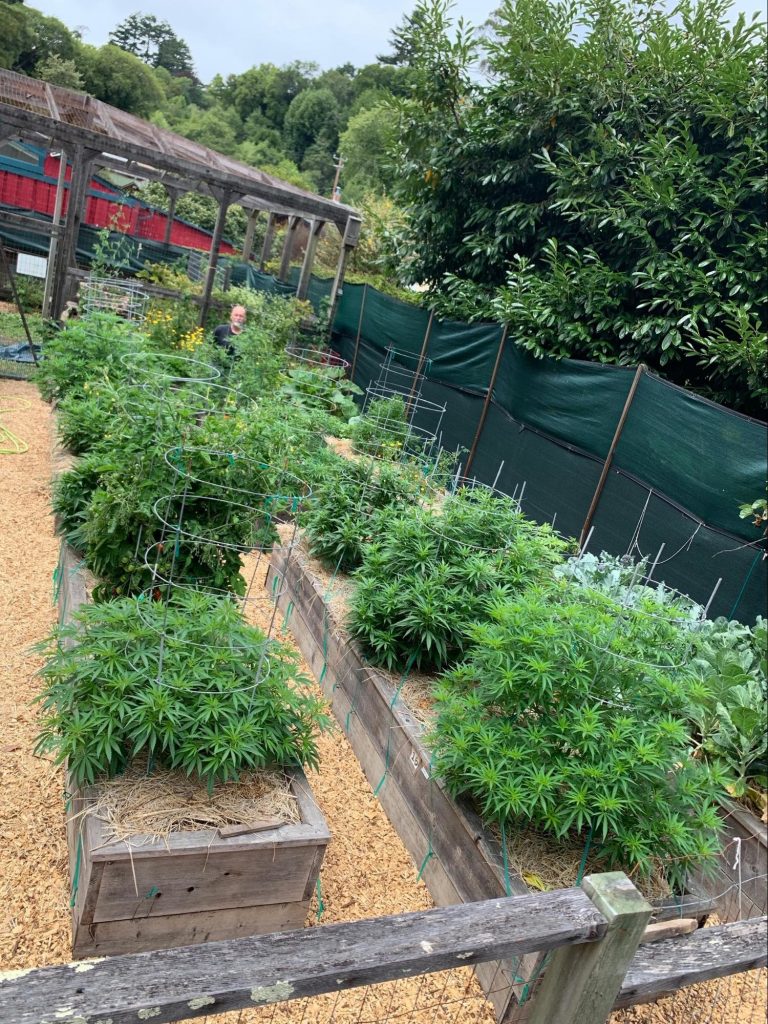