First, a belated Happy Anniversary to us. Number 38 for Karen and me, celebrated yesterday. I present as evidence this sequence of photos. A week after we were legally married at San Francisco City Hall, we had our own, very small ceremony. We were about to sample some wedding cake (up my nose) with a few friends. Note the knowing look of mischief in the eyes of my lovely bride. She knew exactly what she was going to do. Well played, my love. 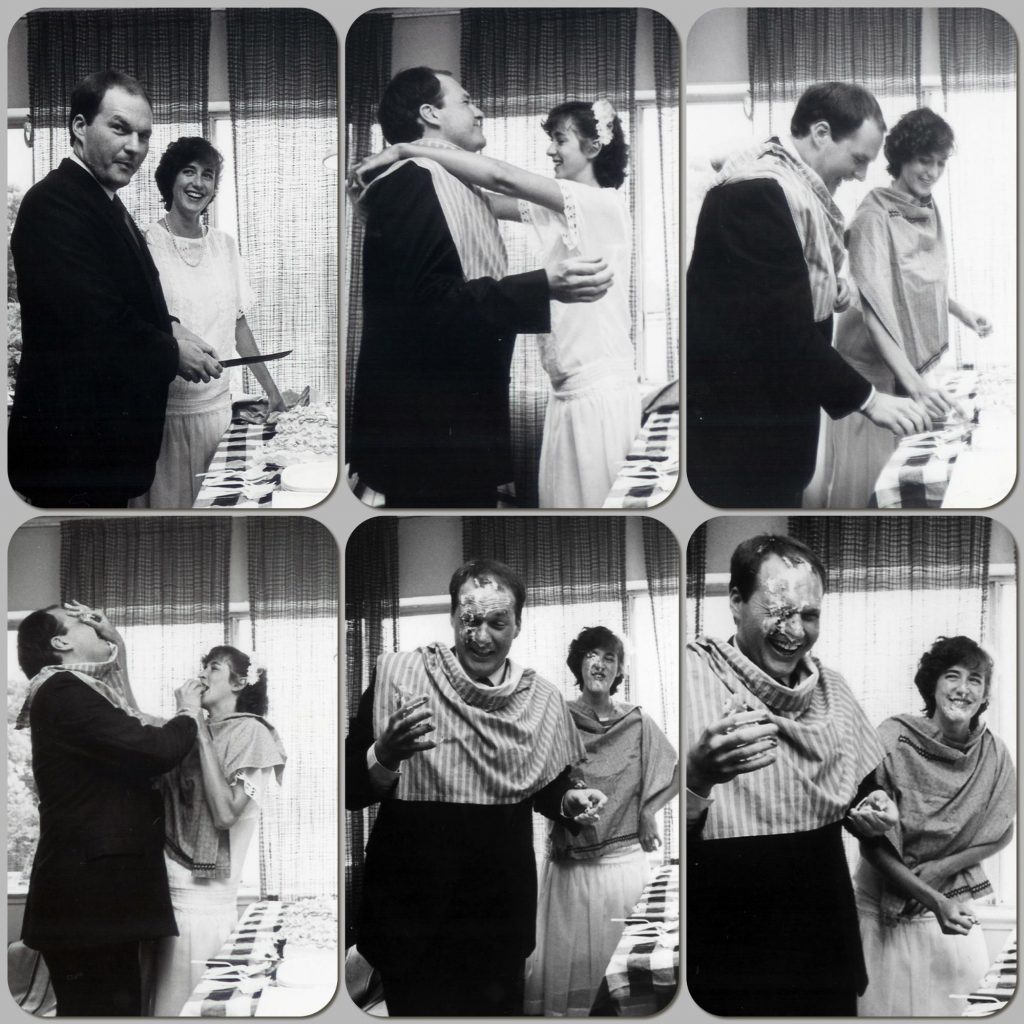 We put plants in beds tomorrow. The new grow is finally happening. A year’s worth of planning has been put into motion, and after six weeks, the plants have revealed themselves. Our cast for the 2020 Isolation Grow includes: Four AC/DC, one Ringo’s Gift, one Sour Tsunami, one CBD God, one White Widow, two Rainbow Kush, one Shiatsu Kush, and one Bubba God. This will be the second time growing every cultivar listed, and the first time from seed for both AC/DC, and Ringo’s Gift. If I’d drawn up the perfect lineup for this year, it would be this group, exactly as is. That’s seven CBD plants, and five THC plants. Both Rainbow Kush and Shiatsu Kush are considered balanced cultivars, even proportions of energy and relaxation. I find Shiatsu leans just slightly toward the relaxation, but both cultivars are balanced and without paranoia. There’s not a lot of sativa in this group, but as I’ve previously written, Karen and I like our sativa in moderation.

I have always been competitive with myself. I set a goal and if I achieve it, I set another. It’s actually more than being competitive, it’s a way of improving. I try to set realistic goals. If I exceed the goal, it’s nice to be surprised. Every growing season, I grow to the best of my ability, with a constant eye on improvement. I am always asking myself, is there a better way?

Last year, we had our largest yield, and that is certainly one measure of success in a grow. We went from 12.1 pounds to 17.1, which was a big leap for us. When I do some simple calculations, it’s easy to come up with a goal for this year. I’m growing 12 plants. If I average

1 ½  pounds per plant, we’ll have an 18 pound harvest. Last year, one of the 12 plants was grown in a 25 pound growbag as an experiment. We grew her in the aviary, to see the growing potential for cannabis closer to where we grow raspberries. She was a cute little plant, and we’d have been proud of her if we’d grown her on our deck. But we won’t grow cannabis in the aviary again. There’s simply not enough sun. If we’d grown that plant in one of our beds last year, we’d have harvested over 18 pounds. So this is a realistic goal, and should serve as my baseline for future years. Will I be content with that? Yes, I think I will. We can grow very well in our raised beds, but there is a ceiling, and last year, we started running into it. Because the plants grew so much in close proximity, we were having to prune large amounts to keep branches from touching each other. It actually became rather comical, and eventually, we only walked down the middle of the two aisles when absolutely necessary. I even stopped carrying the foliar sprayer down the middle, and instead, used the long hose arm to stretch the sprayer into plants. Walking down the middle aisle led to two large broken branches that caught on the foliar sprayer hose and snapped. Reminder–When something like this happens, and it will, make sure you treat the wound with honey immediately. A large tear, or break, is an open invitation for pests and pathogens to strike. Last year, we lost one large branch of Sour Tsunami that I estimate would have accounted for another ⅛ of a pound. But we sealed the wound and harvested the remainder of the plant without any issues.

That is the primary reason why we’ll be growing in all three rows this year. I’ll have two plants in beds against the fence. This is a bit risky, as those beds tend to get the least early morning light. However, I have grown AC/DC and Cannatonic against the fence before without any early flowering issues. It’s important to remember that AC/DC is half ruderalis. As such, she will auto flower, so the earliest I can get her in beds is the goal. Each of those plants will grow as much as they need before they decide to flower. Ruderalis seems to adapt, so I’ll grow two of them against the fence in order to open up bed space in-between plants in the other beds. As you can see below, the only space last year was in the space between aisles. The plants swallowed us. It was the first time we had to put the third part onto the Texas tomato cage. Also, note the extra tomato cage we positioned in the empty bed on the far left. We had an empty bed, so we utilized another cage for training that particular White Widow. This gives you an idea of what we’ll be doing this year, with a space between some of the cannabis. We’ll be able to train into the bed that does not have cannabis. 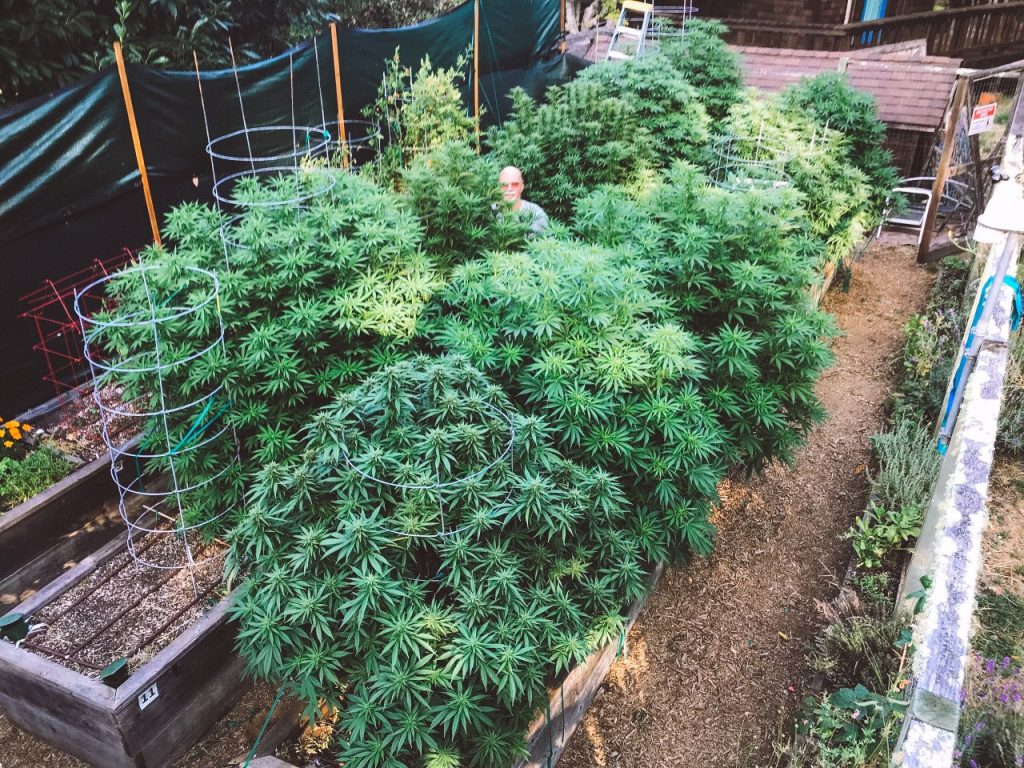 Every grow is different. This year will obviously be new in one way, and that is Covid-19. Brenden and I will have to work together from a distance. We are in constant communication about our health, and possible exposure. Our sons are much more exposed than we, and their exposure puts us at greater risk when they are here.

So the challenge this year is to remain healthy, while still communicating clearly. I don’t see this as being a problem, but it is certainly a new factor. The good news is that I can largely leave Brenden alone out there when he comes to work. We’ll discuss what he’s doing, or what I need him to do. After years of doing this together, both of us are adept at taking a glance and knowing what we need to do next. And Brenden’s fresh eyes typically spot things I miss.

We can only hope that we can all be inside, in the same room for trimming, come harvest. If we cannot, then some trimming will have to be done outside, as we continue to distance. It would also mean I would probably end up trimming more. Whatever it takes.

When Brenden, or Ryan at harvest for trimming, have been unable to join me in the past, because of work or whatever, I’ve always told them that I’m prepared to do everything by myself if necessary. I am one of those worst case scenario types. I like to envision the worst, and come up with a plan for it, just in case. There have been plants each year that I had to bring down, bring in, and trim entirely by myself. Karen’s wrists and fingers will not allow her to trim. It used to seem daunting to me, but it’s not. It’s just work. You do as much as you can each day and then start again the next. You plan out every step you need to achieve, and don’t cease for the day until you’ve achieved your goal. Last year, when everyone else was busy with their own work, I trimmed for almost 15 hours, got up the next day and did it again. Everything eventually was finished. Don’t get me wrong, I love having help, and company, but not having help is no excuse to not complete the work.

I am mere hours from having plants in beds.

Fact is, I’m mere hours from being awake again. I’ll be up for sunrise tomorrow. Karen probably will, too. It still seems unbelievable to be doing this again, for the fifth time. And I’m writing about it to you, whom I don’t know.

A word about that: When the blog is over, at the end of harvest, after the final weight count is tallied, clean up complete outside, possible solarization begun immediately following clean up, odds and ends, bits and pieces, done, the end, following the final blog, that is when comments will be allowed. When the work is finished.

With all my heart, I hope by then, we are all reunited with those we love, close range. But if we are still fighting for our lives by remaining apart, be assured that Karen and I will still be here, curing our plants and resting after a long summer and fall of work. I look forward to joining the conversation with you from time to time.

In the meantime, see you tomorrow at sunrise. 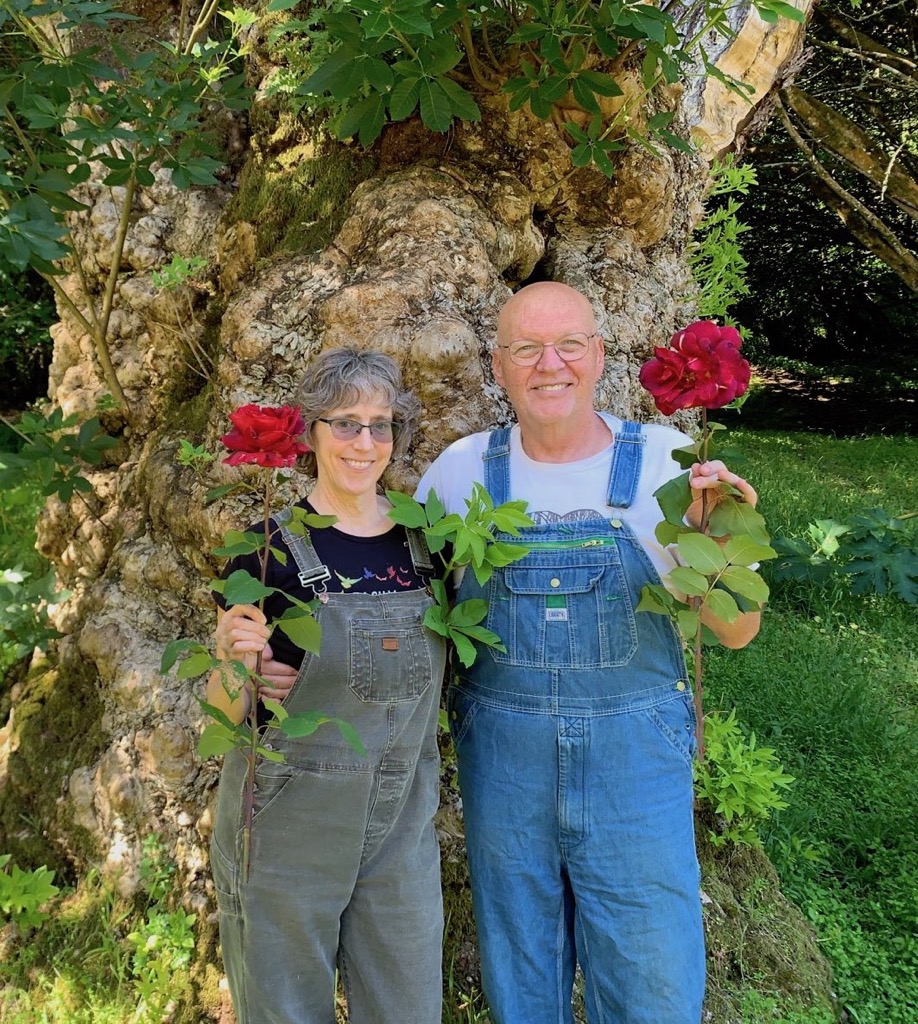