All growers have pest issues. Be they insect or vermin, growing food and/or cannabis attracts creatures who want to help themselves to whatever is being grown. I have largely prevented raccoons from helping themselves, and that is a major victory.

I work proactively to prevent as many pests as possible. That is why I use aromatics in every tea I brew. In future posts, I will detail beneficial insects, and beneficial plants as other valuable tools in preventing pests from damaging your crops. 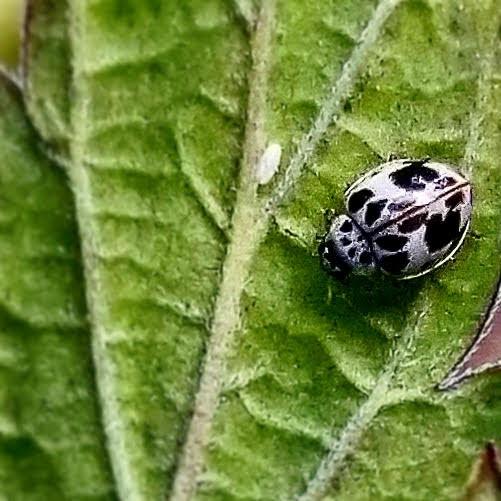 There are insect exceptions, of course, where my efforts have no impact, and I have had to find new methods to protect what I grow. In my neck of the woods, we have the western cucumber beetle, aka, the green ladybug. I had no idea how awful this insect is until growing cannabis. They have defoliated cannabis left unattended for a weekend. (Not mine) They will swarm if no one fights back. Even the stray beetle can transmit bacterial wilt in plants younger than 16 weeks. By the way, bacterial wilt is also a major disease common to the nightshade family.

Pyrethrin (made from chrysanthemums) is the only insecticide I know that will take these creatures down. I have pyrethrin, but I’ve never used it. Unless you are incredibly careful, pyrethrin will also kill the beneficial insects in addition to the western cucumber beetle. In particular, I won’t spray because it will kill bees. We have a thriving bee population. There are many local hives, and all the bees seem to enjoy visiting our lavender, and garden beds.

Here’s a bonus:  Bumble and Honey bees like to take naps on cannabis fan leaves. There is sketchy evidence about bees and cannabis. All I can report is what I observe. They love to take a break from pollinating everything in sight and take a siesta on sun drenched fan leaves, including those covered in trichomes during the flowering phase. My son, Brenden, has actually pet them while they doze.

I don’t know if honey bees, or bumble bees, feel anything from the plant. But they definitely nap. On warm days, it would be ironically fair to describe them as baking. The one creature that I can unequivocally say is changed by napping on cannabis are yellow jackets.

I am not a fan of yellow jackets. I understand their role of scavenger, but they tend to be aggressive jerks toward everything. Not so in my garden. I’ve never been stung or chased by a yellow jacket in our beds. They nap a lot on cannabis, and only become aggressive if another threatening insect approaches. I do not hassle them, but I don’t avoid them, either. I’ve done foliar sprays with yellow jackets napping. They will fly off, and come back when the plant is dry.

The ultimate solution for the western cucumber beetle is fantastically simple. When that insect begins arriving, you should react with some haste. The way to stop them is to tent your plants for a few days with the type of plant cover that allows some light to get through, but no bugs. If they cannot get to the plants, they move on within days. Further, I’ve now discovered what they are really looking for is cucumber vine. About a year ago, I noticed some growing close to the stream near our house. After tenting my plants, the cucumber beetles eventually found their way to this vine, a deadly plant that strangles other plants. At the peak of summer, that vine will be covered in beetles, and my plants will be relatively safe.

I have two more methods for dealing with the western cucumber beetle. One is between the thumb and forefinger. I will not allow an insect to simply sit and chew a leaf while I watch. They pop like little grapes. The other method is by far the most surprising and gratifying.

When Karen became ill, and was home all the time, she tried to become friends with our backyard birds. Karen is a bird lady, with all that implies. She’s never met a downed bird she did not try to save, and she tries to make friends with the rest. She is someone hummingbirds land on, and if you don’t believe me, look below, or check out her Instagram #beanieboy_hummers. She taught all of us how to get hummingbirds to land on us. But the hummingbirds have always clearly preferred Karen. Smart birds. 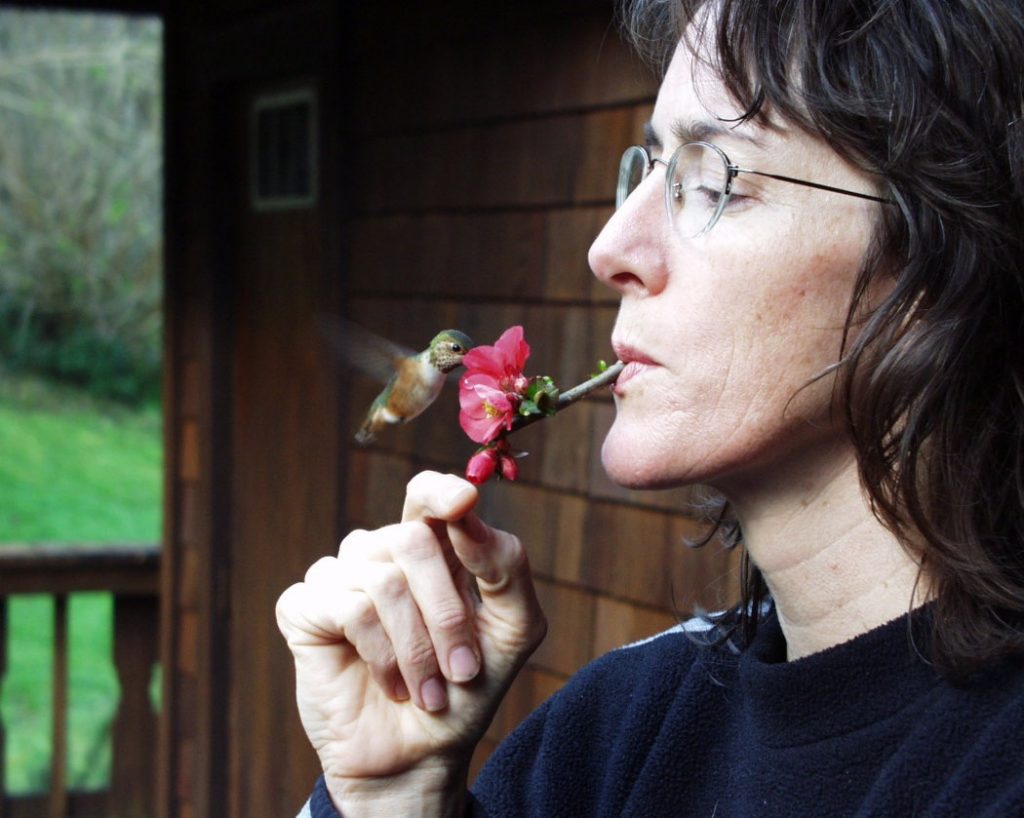 The corvid family of birds are well represented on our property. Scrub jays, stellar jays, crows and ravens have all nested here during our nearly 22 years. Prior to the last couple of years, I’d found scrub jays in particular, to be loud, and they bully smaller birds.

One morning in 2017, when Karen had improved enough to be more mobile, she saw some scrub jays outside, grabbed a handful of peanuts, and threw them on the deck. One scrub jay came to the deck, and from inside the house, the jay could not see us watching it. The bird sampled every peanut on the deck, before choosing the largest and flying off. We could not see where the bird hid the nut. We watched the bird return for every nut, going through the same process of sizing them up before selecting. Karen began to call this jay, “Peanut.”

In a very short time, we had the trust of Peanut, and Peanut brought family and friends. Soon, word had spread through the corvid community and we had crows and jays competing for peanuts. We did not throw them out often, just once every couple of weeks. Over a period of years, more corvid families have chosen our property for their nests, and that means lots of baby birds. We love these highly intelligent creatures.

Two years ago, I was sitting in the beds one evening. I was taking notes, periodically rising to squish a beetle. There is a tree behind the wooden fence of my neighbor, and it hosts more than one jay nest. I could hear them in the tree, babbling. Corvids are talkers. They will imitate sounds, even humans. Scrub jays love to sit on the fence and babble at me. I’ve given them my fair share of peanuts, too. So I babble back. They seem to enjoy this. They puff up and become chatty. All of this, I must admit, serves to lower my blood pressure. It is so calming. As I patrolled the beds, squishing insects while inspecting, and babbling, I also told the jays they were more than welcome to pitch in on the bugs. Their obvious gratitude for peanuts notwithstanding, I could use their help.

A few minutes later, while still engaging in babble, mama jay dropped from the nearby tree to one of the tomato cages housing cannabis. Two of her fledglings followed. I watched mama jay show her babies how to eat western cucumber beetles without so much as damaging the fan leaf. I’d not seen them do this previously. They now do this regularly, even with me close by and watching. We have apparently established a level of trust, and I no longer have a reason to complain about scrub jays. I love scrub jays now. They lend me a hand, and they earn their keep. By the way, I find peanuts in my grow beds all the time.