I haven’t had much of an online presence for years. I left facebook over five years ago, will never return, and I don’t pay an abundance of attention to the latest anything. I rarely check my website. I recently stopped following the news until after the election. I know who I’m voting for. I did open a private instagram account so I could see what our children post, and I can follow any comments about the blog, and respond if need be. I focus on my work, family and friends.

One thing I’ve read being asked about or commented on a number of times is BT. I understand that some of you disapprove of the killing of worms. Some of you believe in removing them to another spot, rather than extermination. I will address this as best I can.

When you have one or two plants, perhaps saving worms is feasible. When you have many plants, let’s say 13 like I’ve grown this year, finding and removing worms would probably end up being your sole task. That’s all you’d have time to do, and you’d still miss most of them. Your crop would suffer. I don’t discourage you from trying. But I can tell you from experience that growing a large crop without BT is a nightmare, and might turn you against growing cannabis. I was completely burning out, until Bee came to help. It was too hard without BT. I wish there were a better method, but there is not. Truth is, without BT, Bee would have burned out, too. Dealing with worms without BT is relentless; especially during flowering, and you will end up with a diminished and damaged crop.

For me, it doesn’t take much of a reminder that I’m growing medicine for my wife and family, not the worms. When I grow, if something is getting between me and the clean growth of medicine, that problem will be found and eliminated without hesitation or discussion. Whether it is worms, slugs, or rats, they must be eradicated.

I’m not nearly so harsh on pests with anything else I grow. Only cannabis. So if saving worms is your calling, you probably should only grow for fun, and not grow cannabis for medicine.

Remember, I TRIED to grow my second crop without a BT spray, for some of the same reasons that you object. I also was trying to limit the amount I sprayed the plants in general. That was the year we lost approximately 40% of our crop to mold caused by worms. It was a plague. When October 1 arrived, I was faced with the very real choice of either spraying and possibly saving my crop, or not spraying and losing most if not everything. As it turned out, spraying BT that year saved the majority of my crop. But it was a nightmarish mess prior to that spray.

So I get it. I don’t enjoy killing anything. But the choice eventually comes back to medicine. What are you willing to do to make medicine for the sick person you love? When I saw the damage done by these worms to the medical plants I was growing, I did not feel sympathy for the worms. I don’t spray BT on other plants. The worms are welcome to live on plants other than cannabis. They don’t impact our food. But if they choose to remain on cannabis, they will die. I feel even more hardcore about rats. I won’t willingly share my garden with anything that damages our medicine.

Since we’ve entered harvest, there’s something else I should address before we get farther along. When I harvest a plant, generally speaking, I harvest the entire plant at once. The concept of “no bud before it’s time,” is a great thought, and probably feasible when you only grow a couple of plants. If I had a crew of trained personnel, I would also be more inclined to follow this practice. But when it’s just two of us, or only me, I do not have enough hours in the day to wait for every flower to ripen. I’ve got thirteen plants and hundreds and hundreds of flowers out there. It’s hard enough to inspect them every day for mold. To wait for every bud to ripen perfectly is a luxury I simply don’t have. Harvesting individual buds when many plants are turning ready at once would be a logistical nightmare. I wait until many flowers on a plant are showing readiness before I harvest. But once I’ve declared a plant ready, she comes down, and the medicine from that plant remains all together in the drying shed, clearly identified.

There was an exception in the last blog. We noticed an entire bough of Sour Tsunami began flowering about a week before the rest of the plant. The six flowers on that bough are the only part of the plant ready. I looked all over the rest of the plant, and she is still a couple of days away. But this one was ready on that day, so I brought that one bough down. I will inspect the other flowers several times a day until she proves her majority is ready. At that time, the remainder of the plant will be harvested.

A couple of observations while I sprayed Regalia this morning: The plants are no longer getting taller. It’s not because they are not still growing. They are growing out as opposed to up. This is primarily because the flowers are gaining weight, causing their branches to bend, and compress a bit. I notice especially as they take on the weight of water during the spray. But even before I began spraying this morning, I noticed the tops on the largest plants are no longer extending up. They have peaked, in terms of height this year.

The above photo has two remarkable things. First, note the base stalk size of RK 18 next to the tender sprout attempting veg growth under the canopy of a giant in late September. That’s not a bush, that’s a tree. The youngster is a raspberry sprout. It has subsequently been transplanted elsewhere.

The other observation is that we haven’t caught a rat in months. There is a very simple explanation for this: Kits. I truly appreciate it when nature takes care of a pest problem for me.

This is the essence of mindful gardening. Creating an environment where most of the problems that arise are dealt with by nature. This is the very reason we grow companion plants, to attract the insects that will help control pests.

Too often, I read about gardeners buying ladybugs for their grow sites. If you are lucky, that might have some impact. But just buying ladybugs does not guarantee they will remain in your garden. There must be compelling reasons for them to remain, or they will fly off to find their happy place. In other words, just because you want and need them, doesn’t mean they’ll stay.

You need to create an environment where insects view your garden as a destination. You want them to have families, like the ladybugs have on RK 18. The larvae are using the entire plant as their nursery. They crawl from leaf to leaf, hunting any stray aphids. If this cannabis plant were not conducive to this, just putting a bunch of ladybugs there won’t mean they’ll stay. The key is to attract the ladybugs, and not just unleash a bunch and hope they’ll stick around.

It’s important to remember that ladybugs, or any beneficial insect, are not necessarily the ultimate solution to a pest issue. Too often, we look for something to solve an issue, without spending the time to understand the source of the problem, and addressing it.

For example, after our third year of growing, I made a decision. We had an old apple tree in our aviary from when we moved in. It was a wonderful tree, with three different kinds of apples grafted on, and they all came to fruit at different periods of the summer. But it was old and dying. The last several years, it attracted aphids in epic numbers, and the apples shrunk.

On one hand, we used to think that particular tree attracted all the bad stuff and the rest of our plants were safe. They were not safe. That year, we removed the old apple tree, and the difference since has been night and day, in terms of beneficial insects having the upper hand. By removing the actual problem (the tree) we opened the door for an entirely new group of insects to occupy our beds. It was year four, when my grow had a breakthrough year, and I am of the belief that removing our apple tree had something to do with it.

In other words, when a problem exists, invest the time to understand the problem. Sometimes in a garden, this old adage is true: There is addition by subtraction.

When we eliminated the old, dying apple tree, we added a huge number of insects that had stayed away while that tree still stood. Eliminating her was one of the keys to unlocking all the benefits of insects in our beds. Growing borage was another. However, we grew borage before removing that tree. IThe impact of borage grew, and it became part of the permaculture of the aviary, which is next to our beds, once the tree was removed.

To conclude today’s blog, let’s take a tour of the flowers and see how they have developed. All of them are in their last month before being taken down. Flowers are fattening, colors are beginning to emerge. We’ve got a serious heat wave coming by the end of this week. After that, I suspect nights will begin cooling into true fall temperatures. When the air chills, even more colors quickly develop on the plants. The autumn effect is dramatic on certain cultivars. I can already spot purple on sugar leaves. All they need is for the temps to cool and the fall colors of cannabis will emerge. Stick around.

The rest of the Sour Tsunami comes down this afternoon when Bee arrives to help. She lasted to day 59 this year. Last year, the same cultivar came down on day 56. Btw, it’s instructive to keep notes from harvest to harvest on when particular cultivars are planted, how long they need to flower, when they typically harvest in your growing space, etc. It’s nice to be able to look back and see what a plant typically does at your grow site. For example, when I read about typical harvest times for Sour Tsunami outdoors, all I see is mid-October. I’ve grown her twice and we’ve harvested her each year during the last week of September. Where you grow will determine how your plants grow.

After harvesting this plant, we’ll have about two weeks before the crunch begins with ACDC 22. So let’s take a little tour at some of what remains. We are looking at a warming trend, but it is now officially autumn, so it was fitting to have temperatures chill down to 46℉ (7.77℃). Drops in overnight temperatures will begin to have a colorful effect on the flowering plants. Purples tend to be activated, along with whatever other colors may appear. In the photos that follow, each plant is shown in whole, and then identified by the flower. 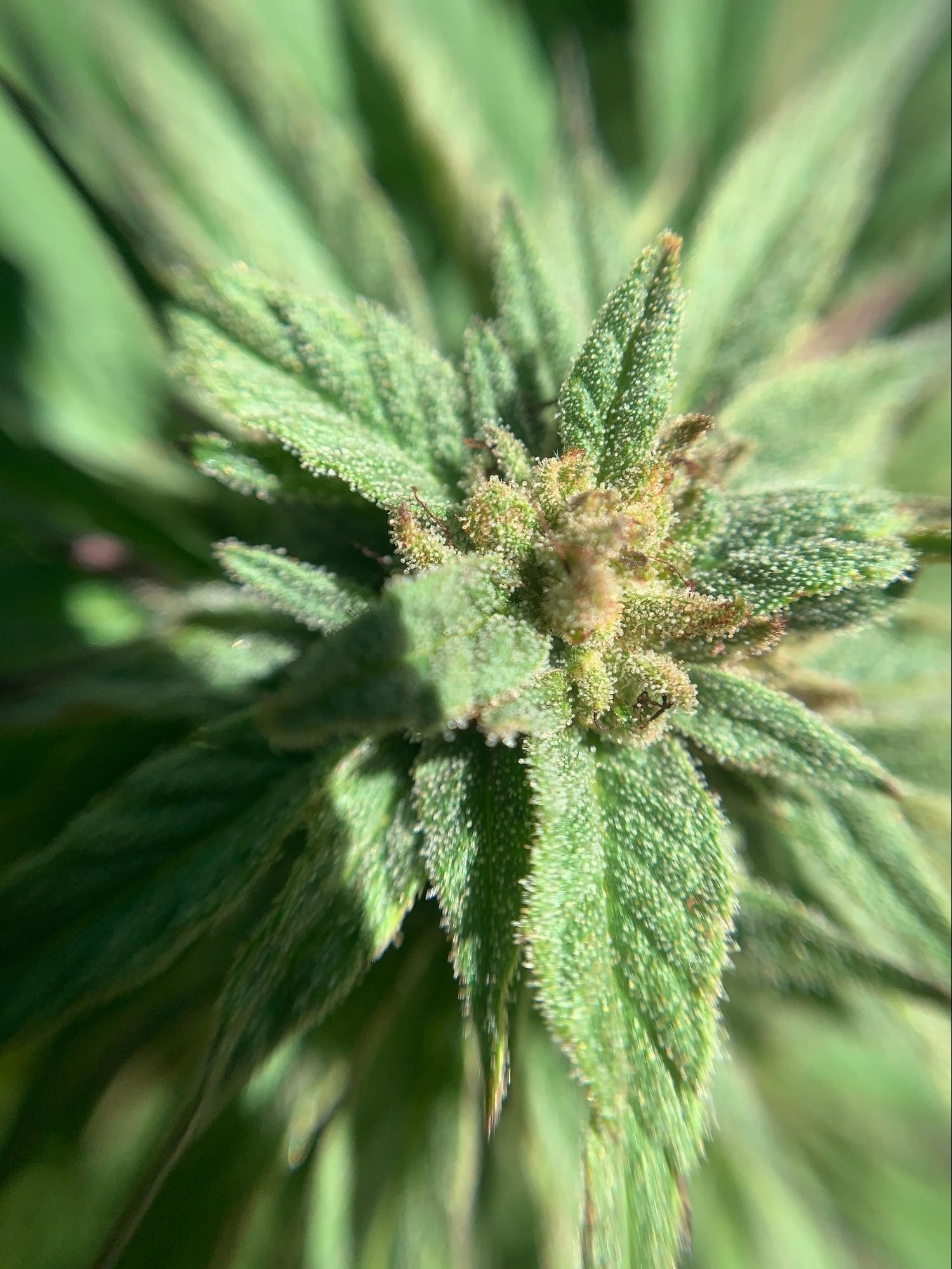 This is Bubba God day 40 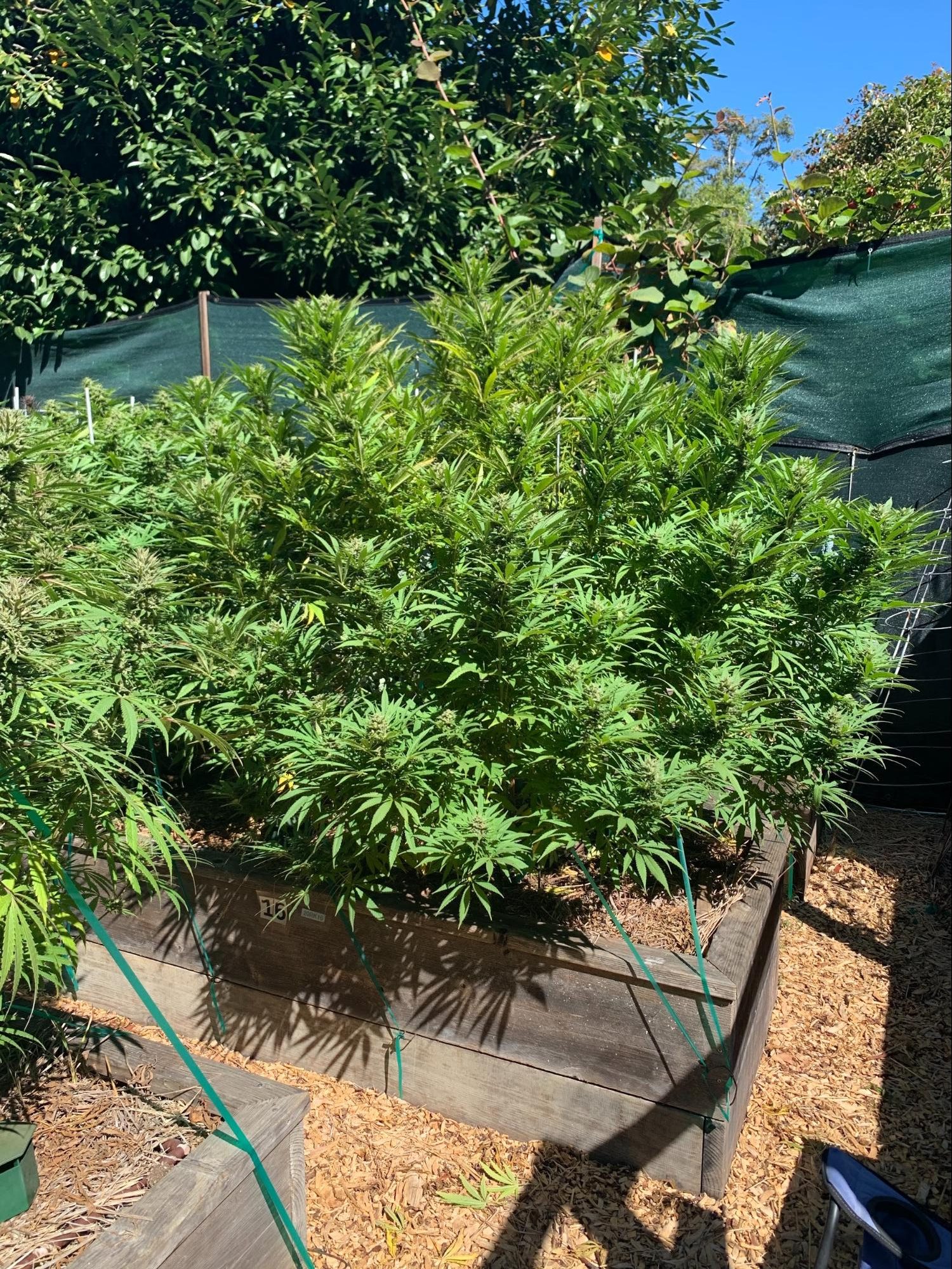 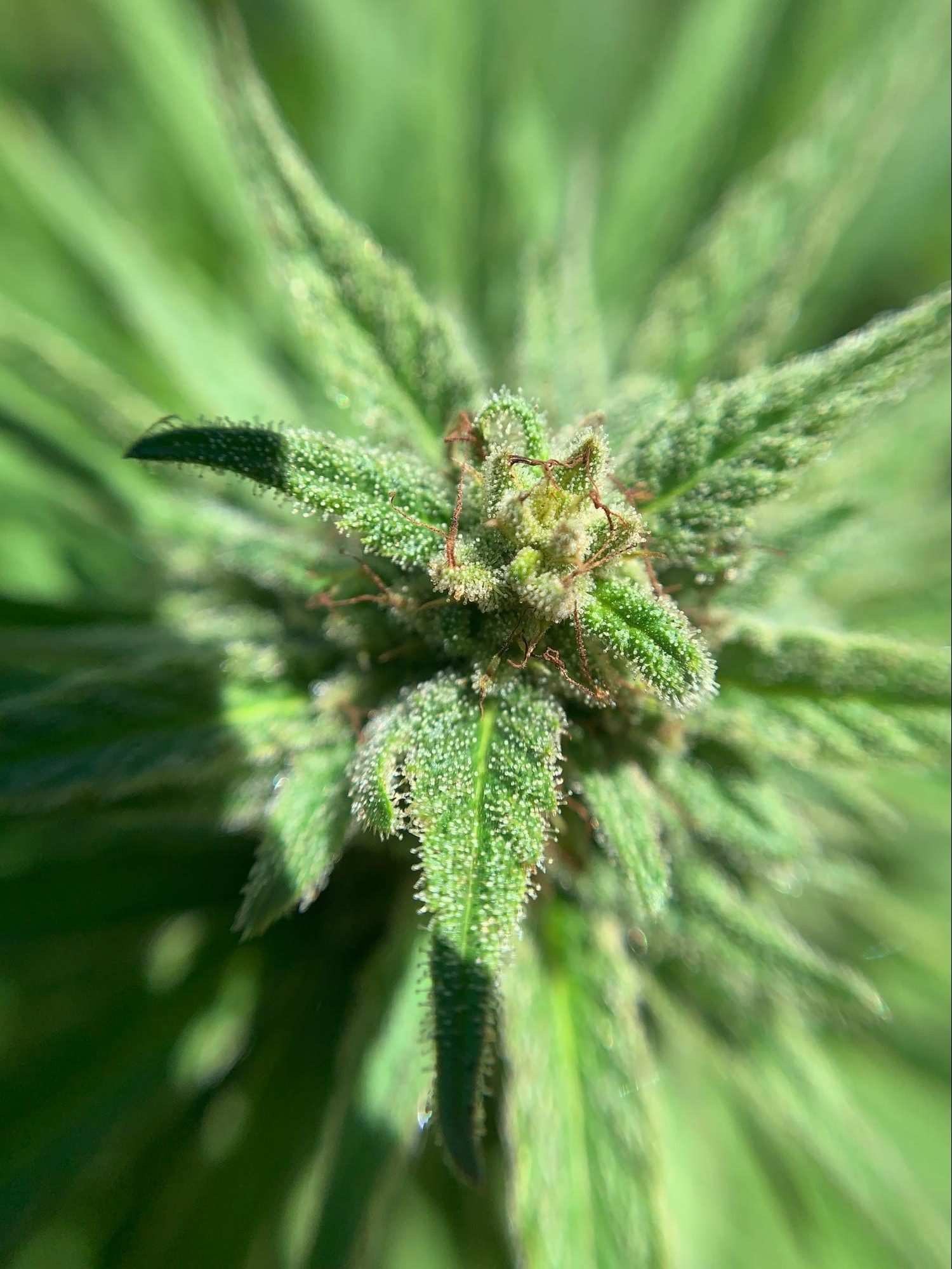 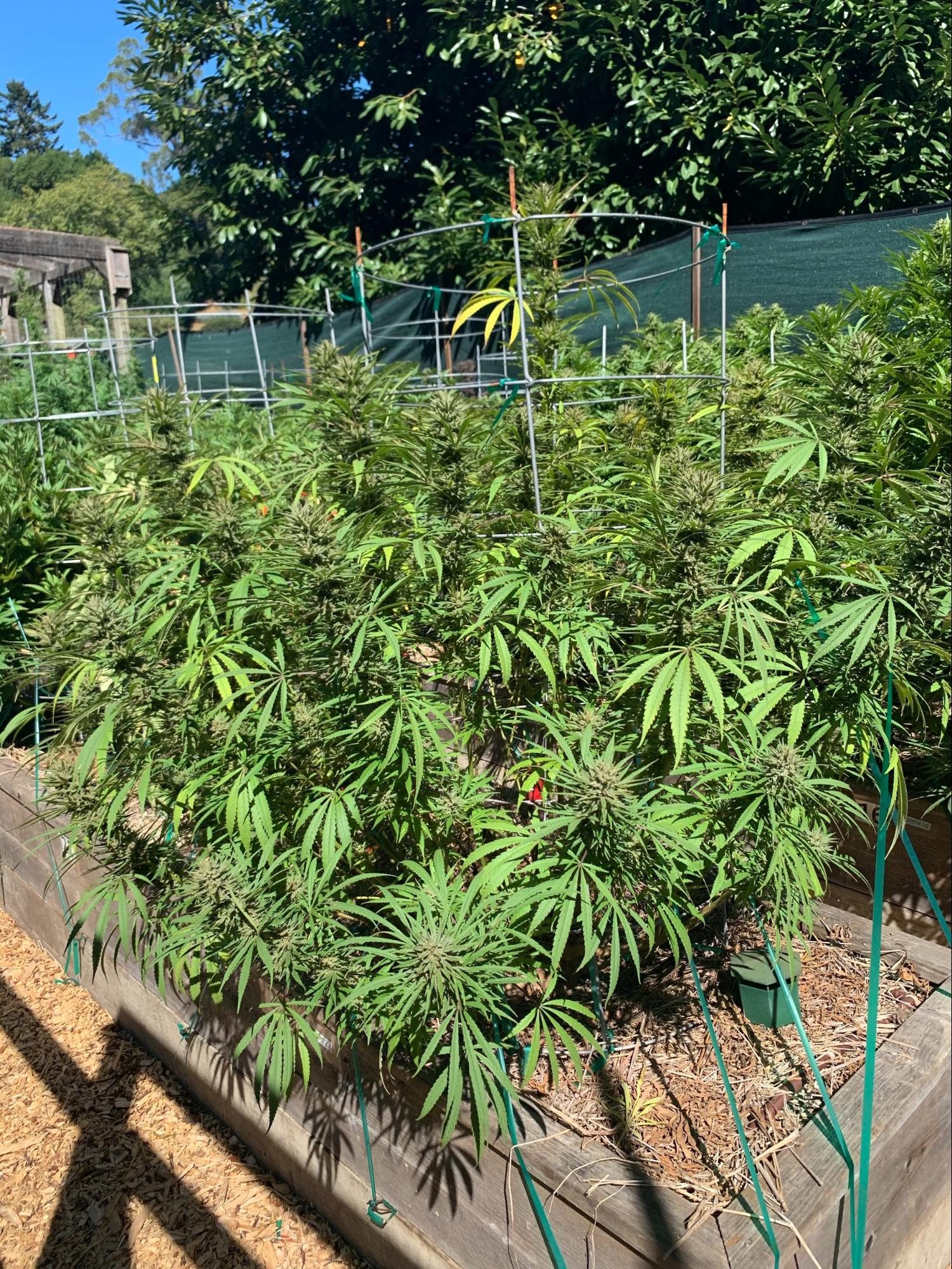 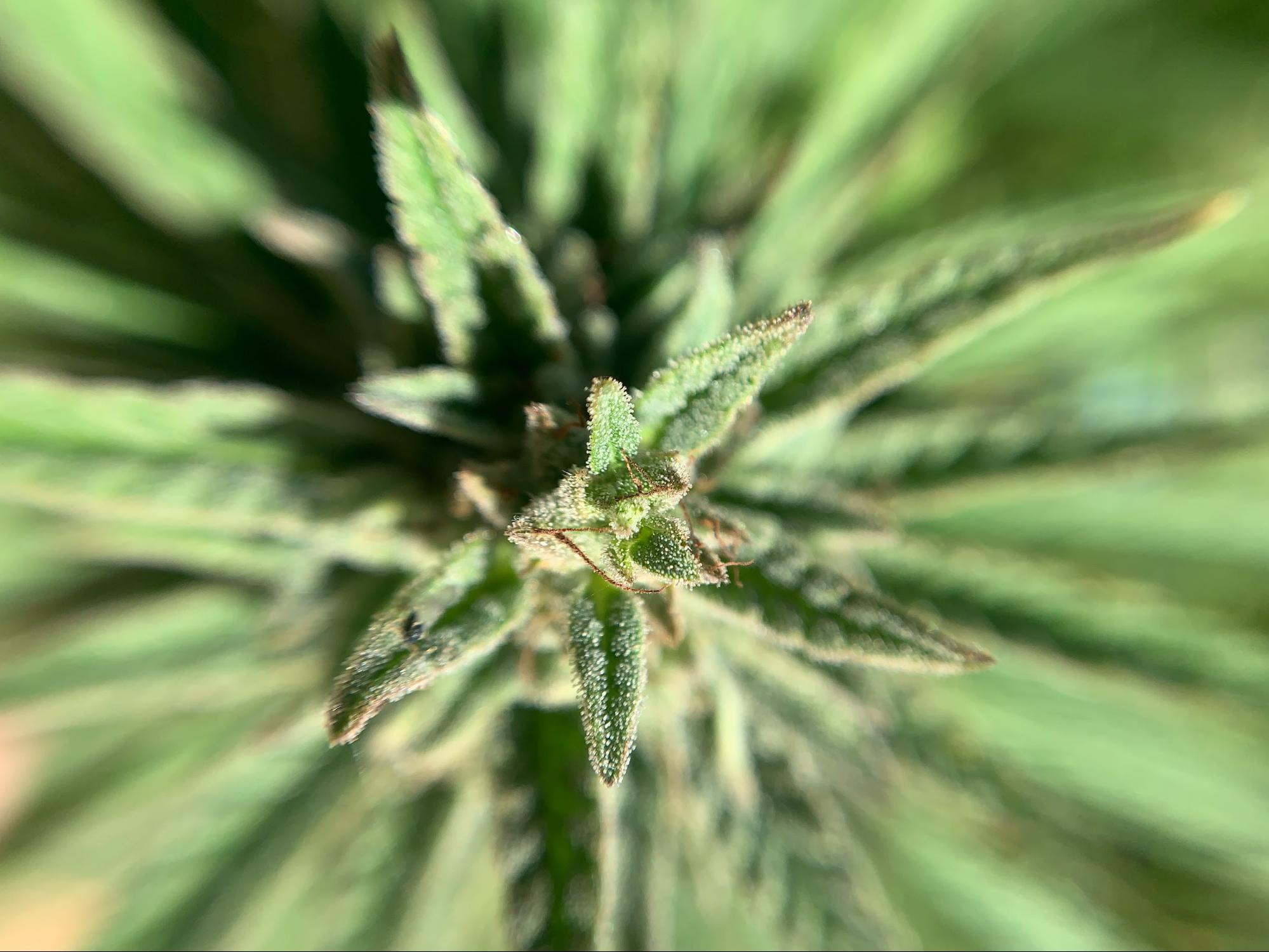 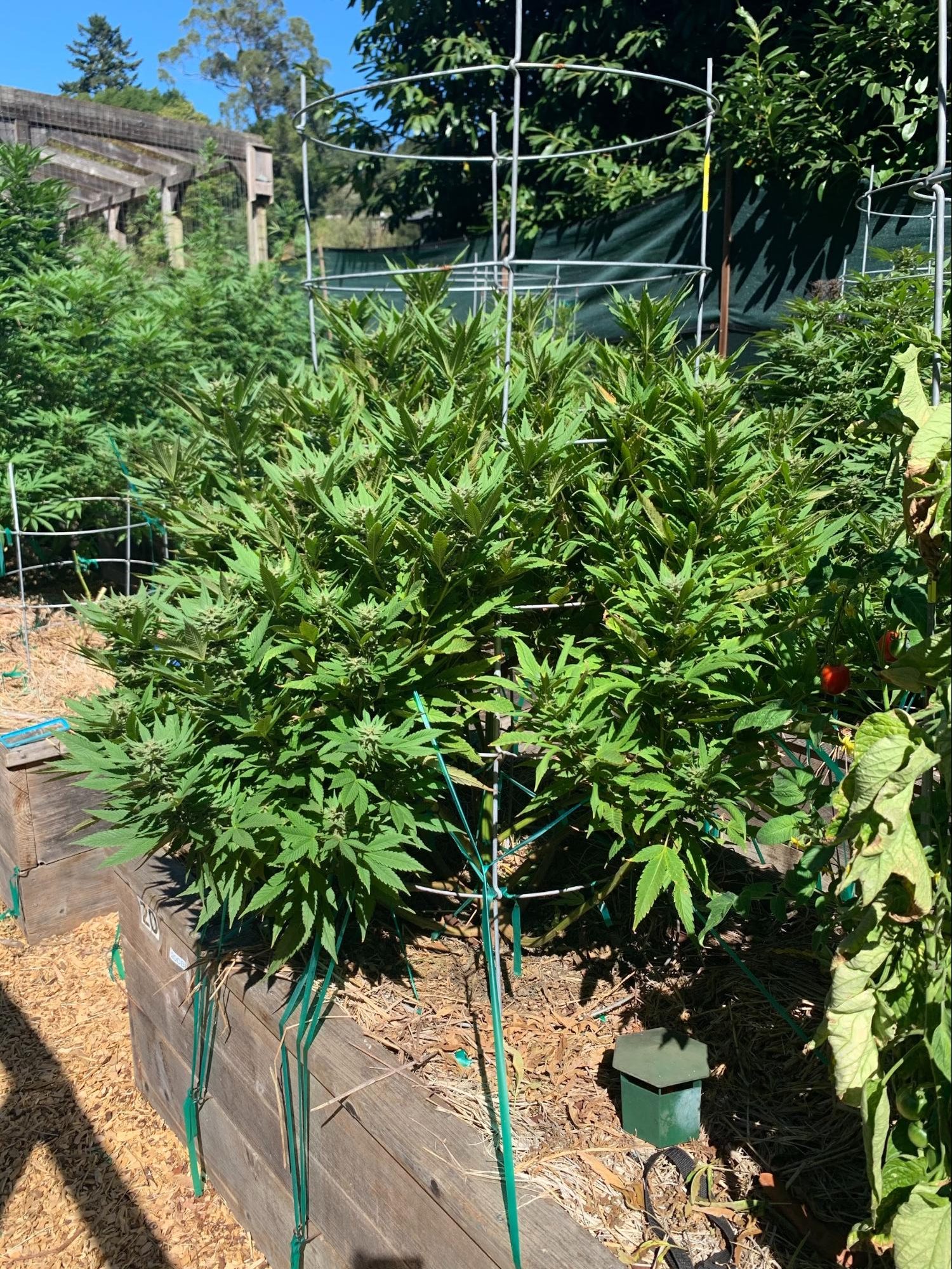 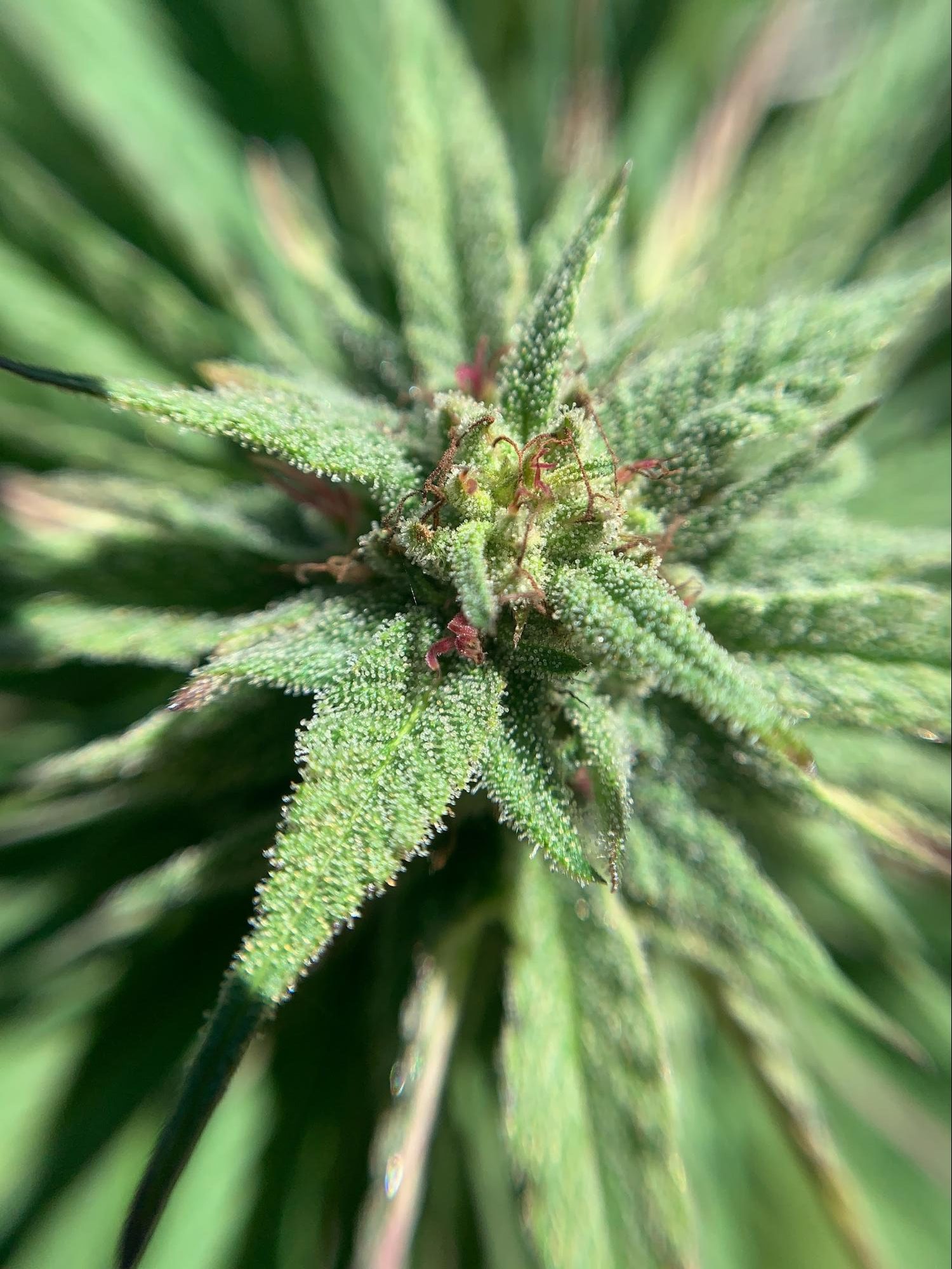 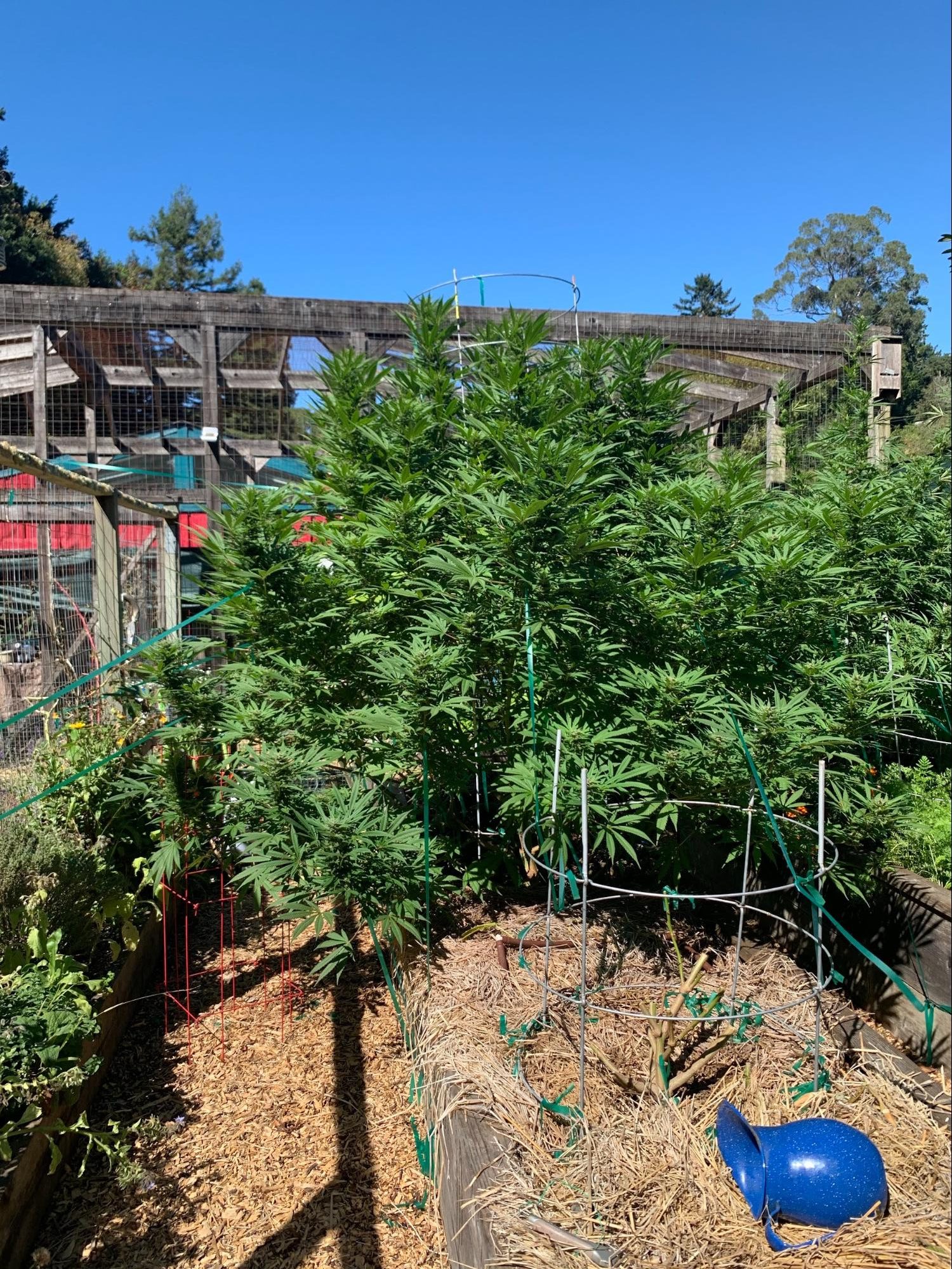 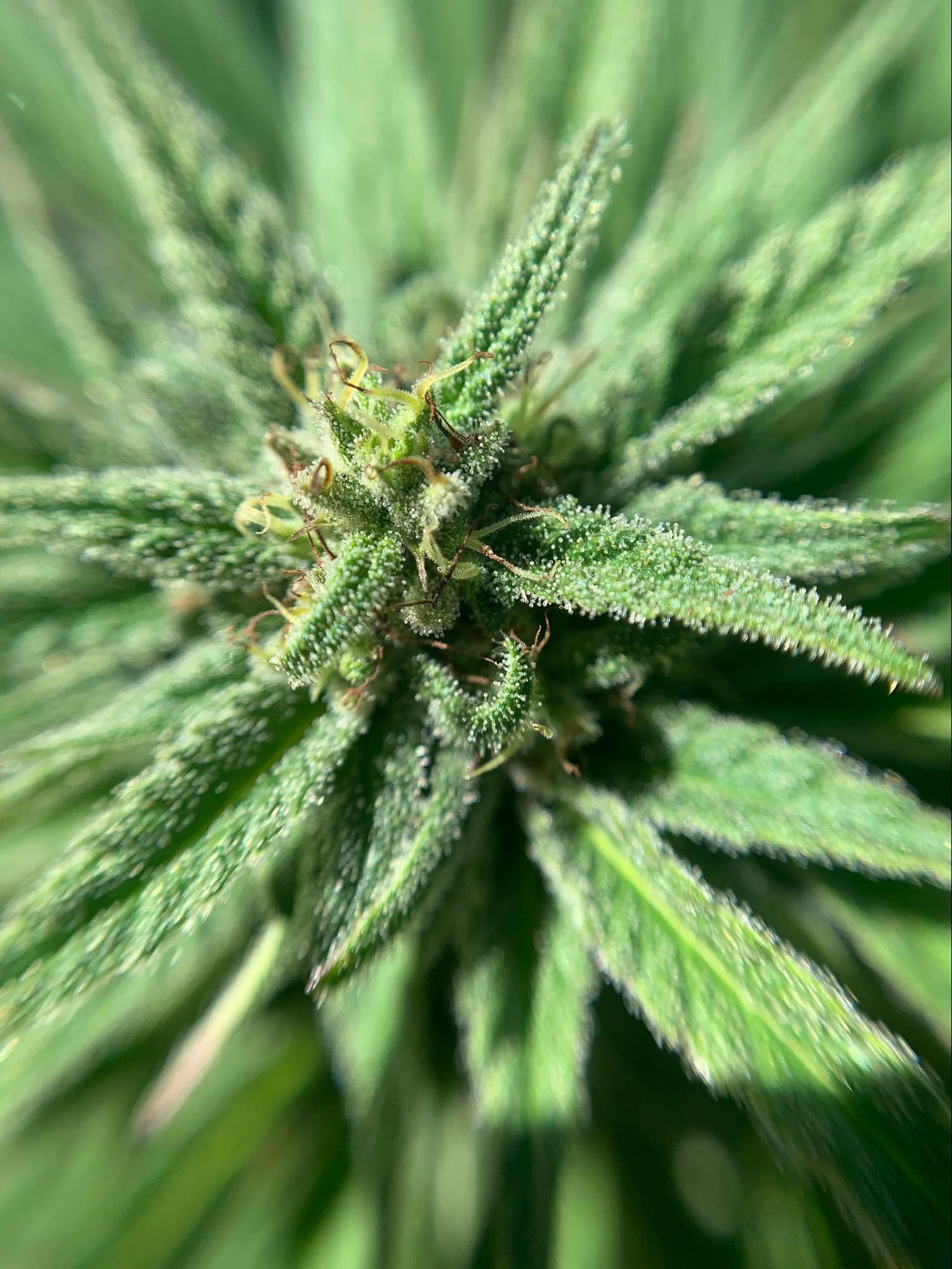 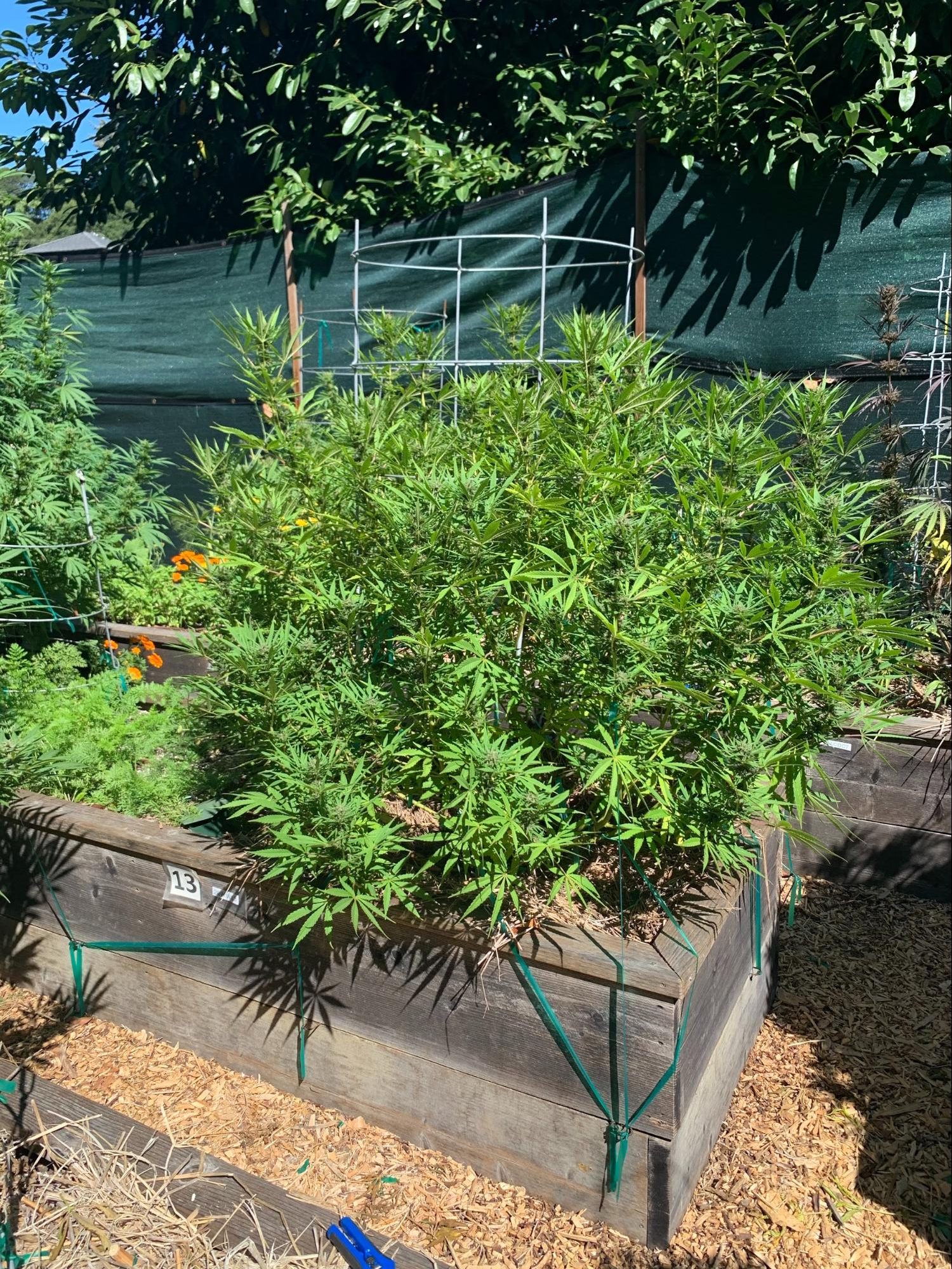 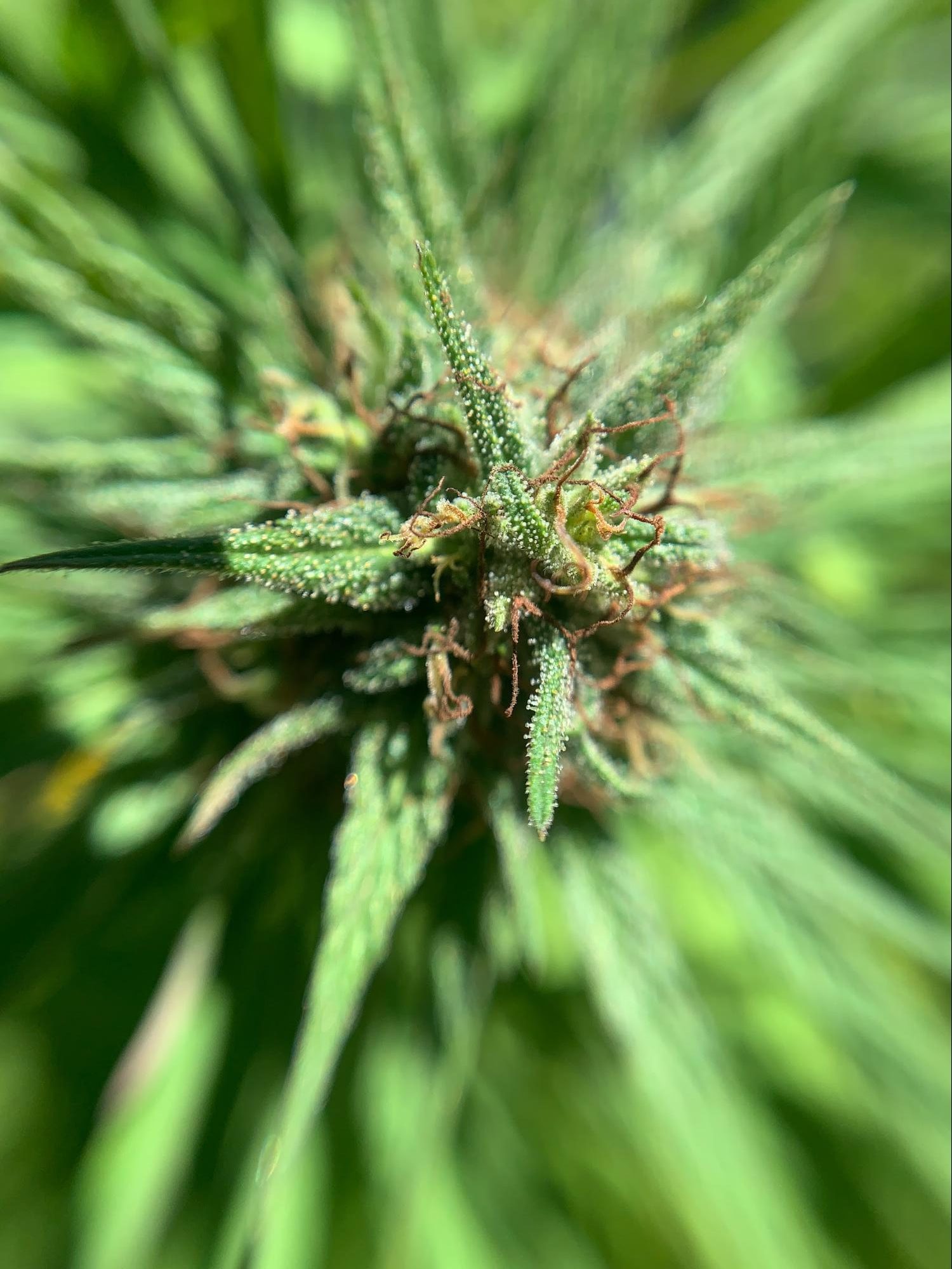 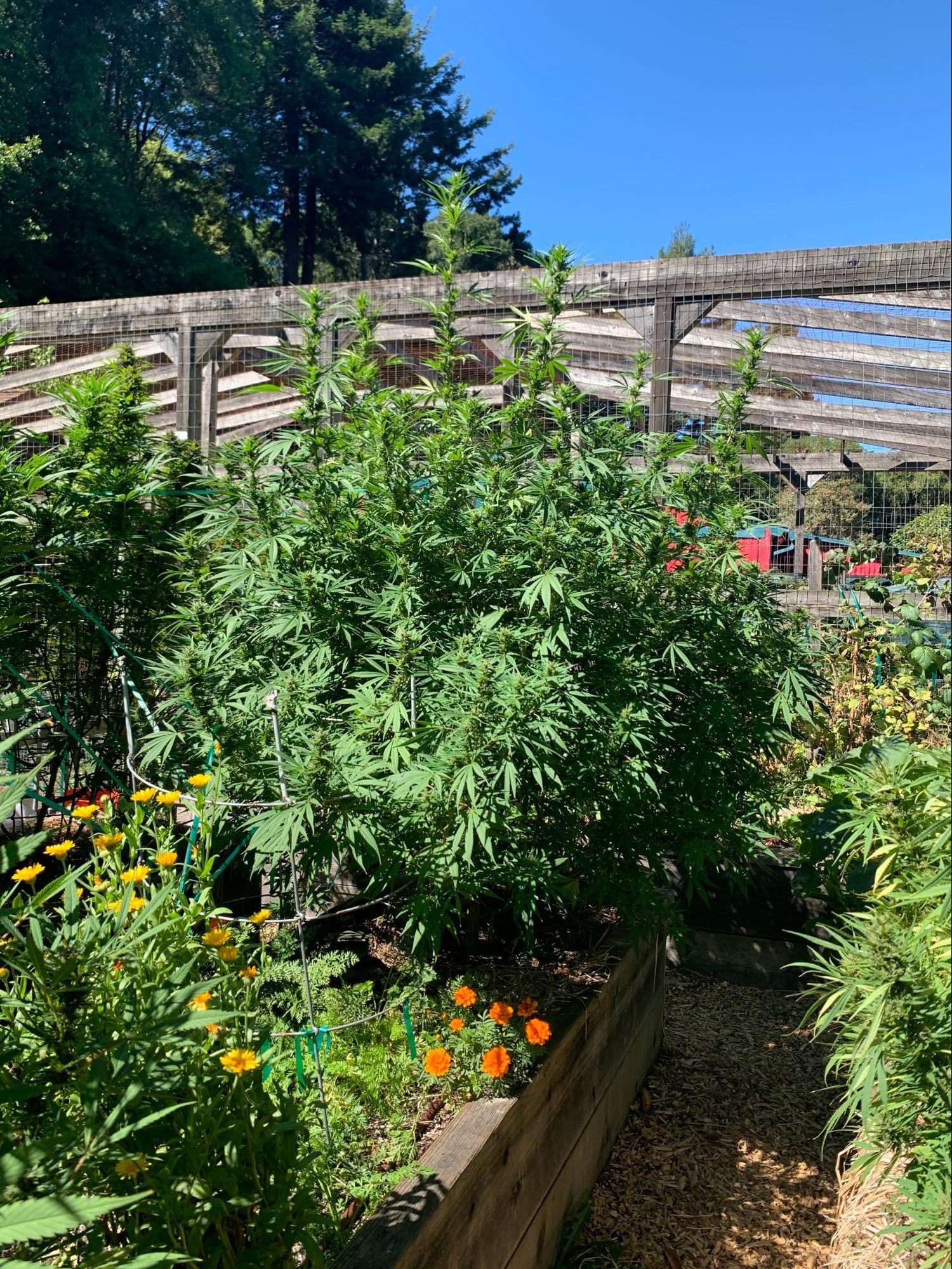 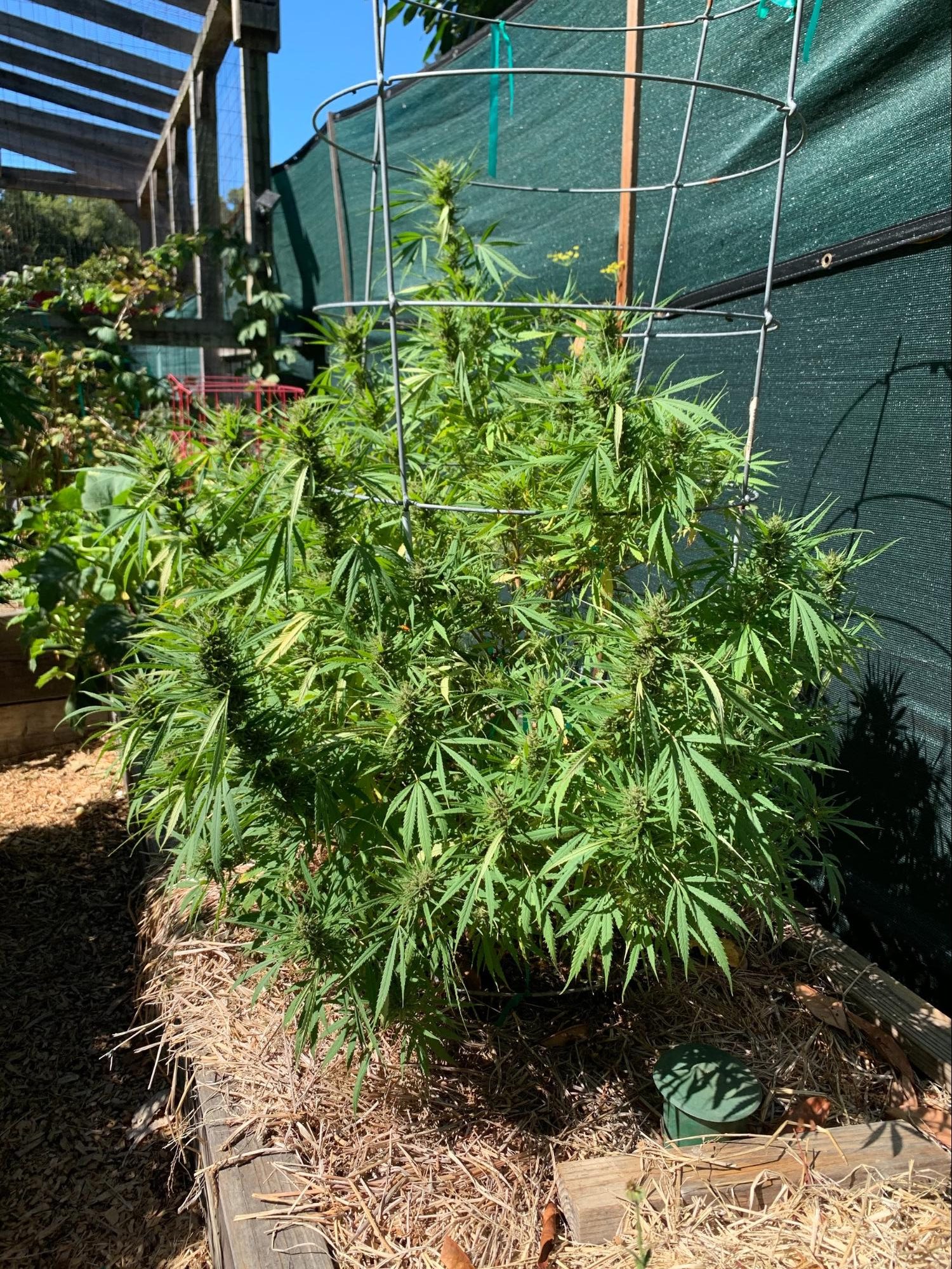 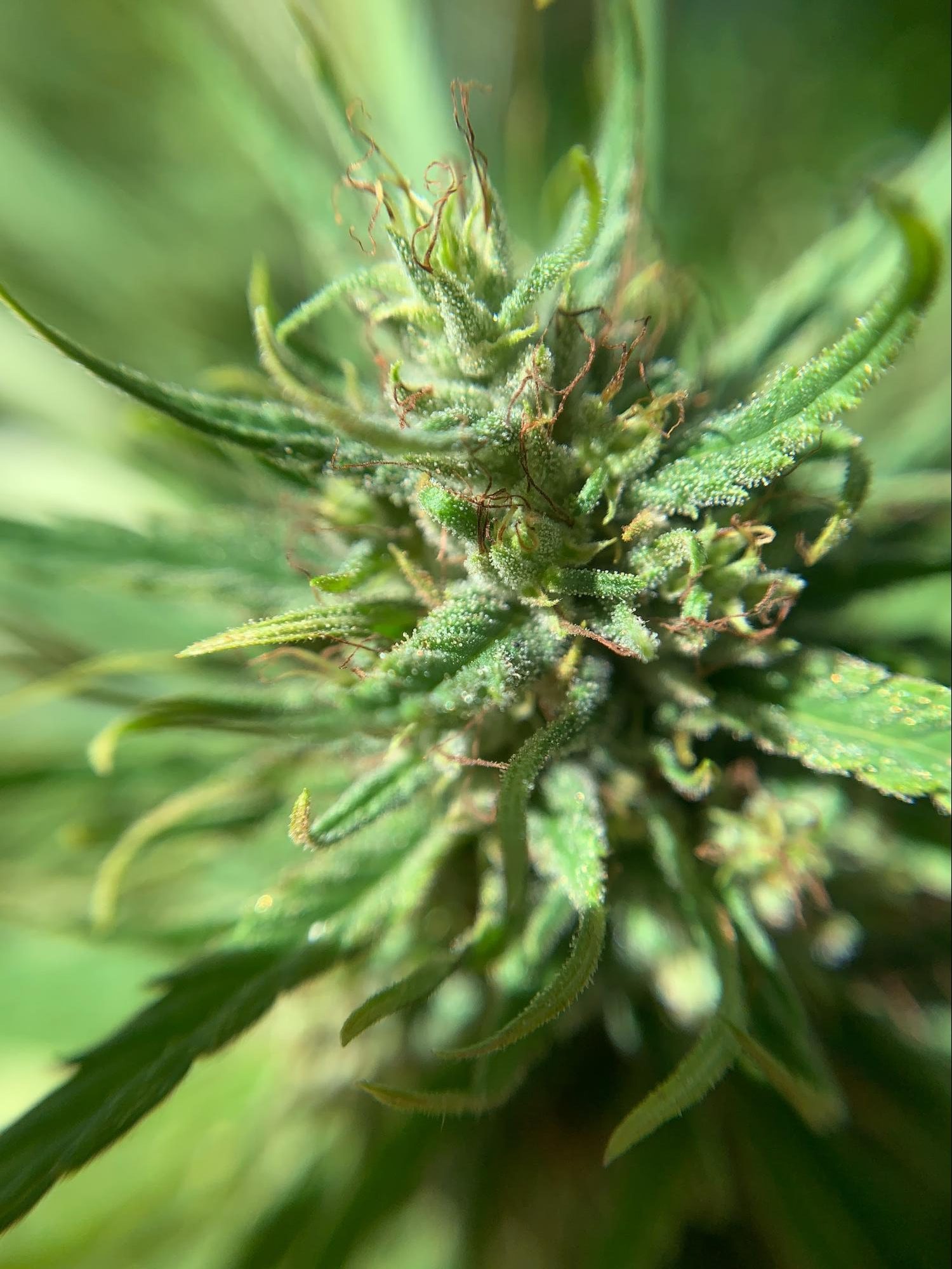 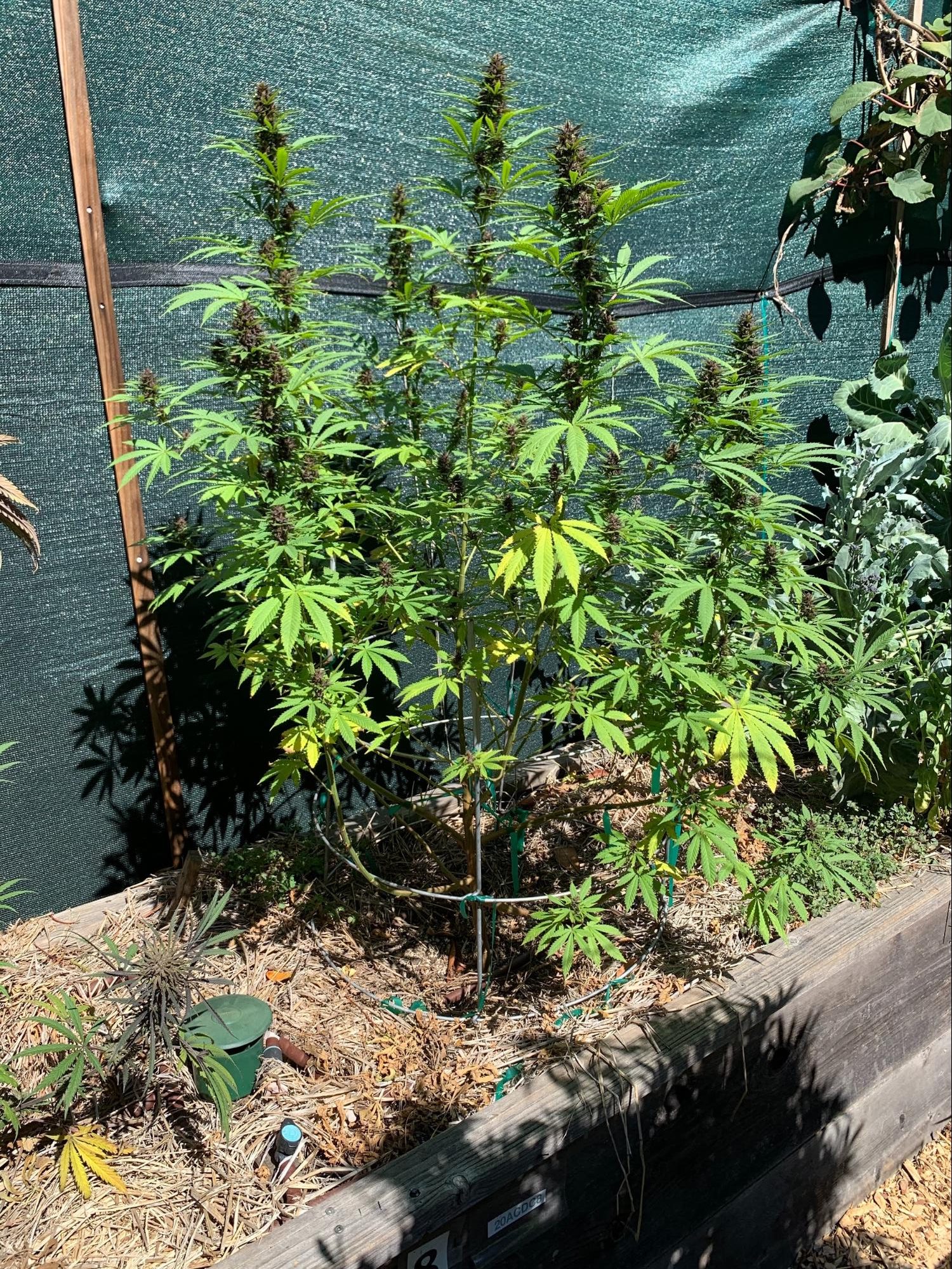 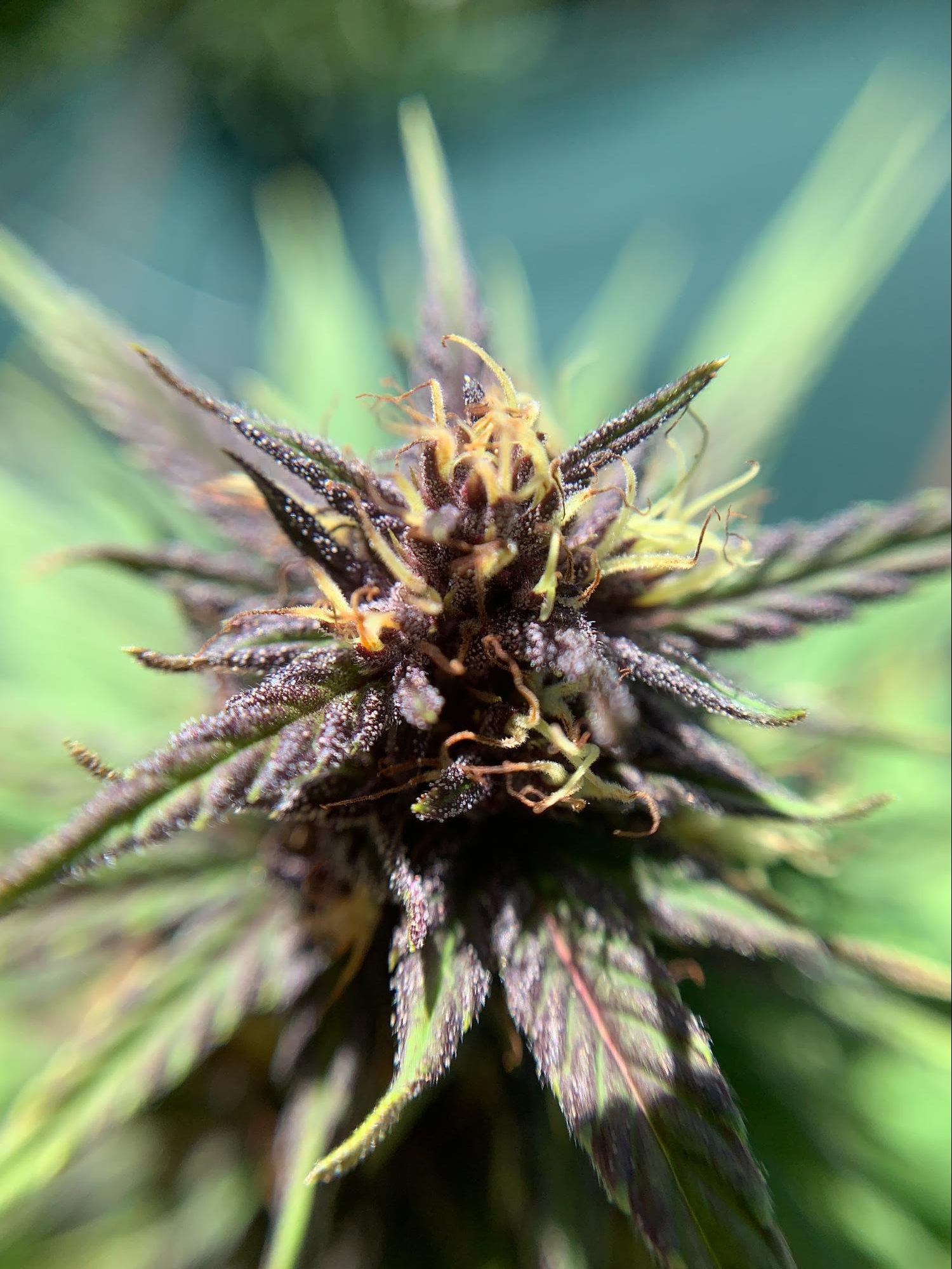 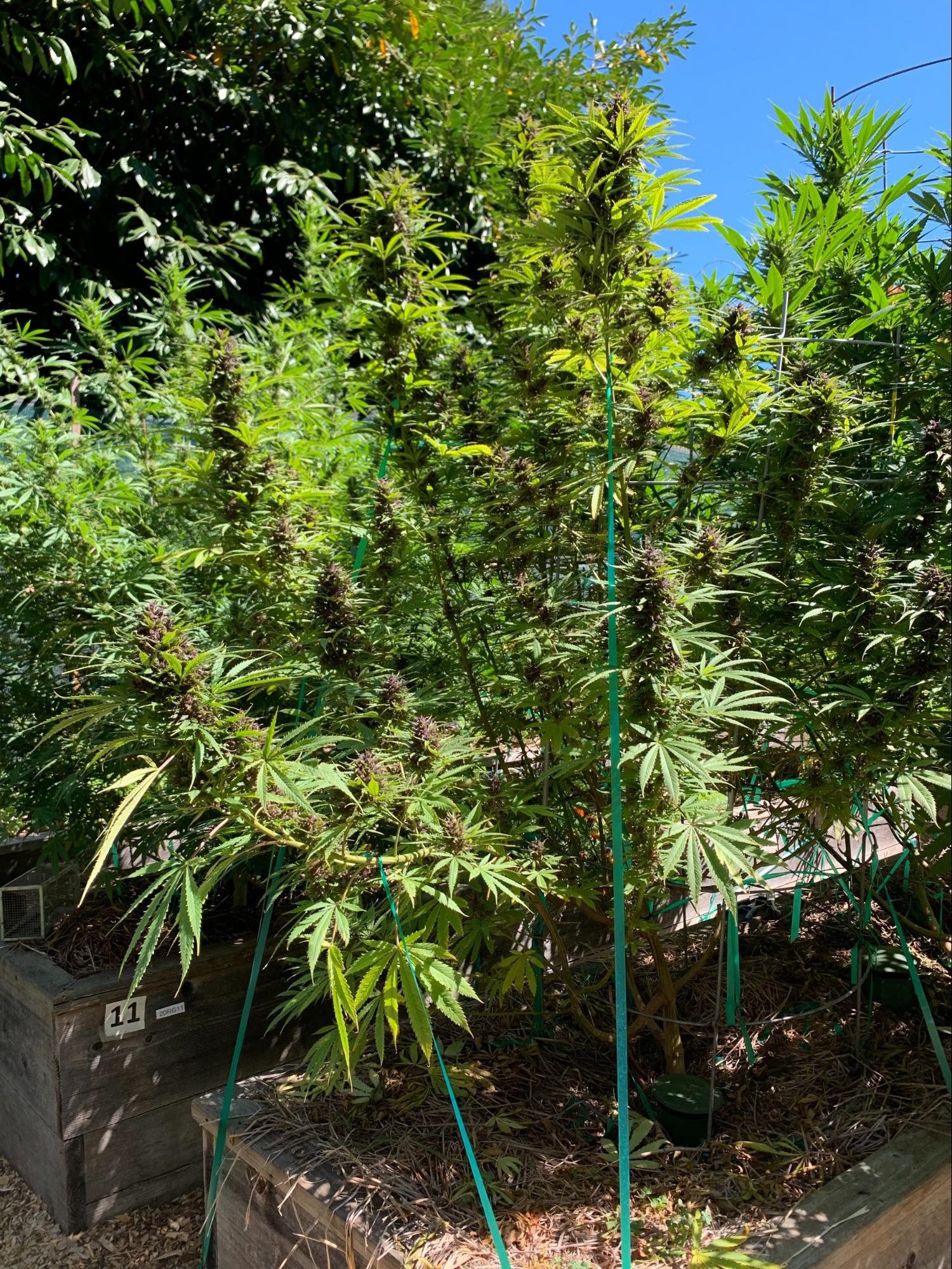 That’s all for now, folks. The home stretch is ahead.

Survive and vote. See you next week. 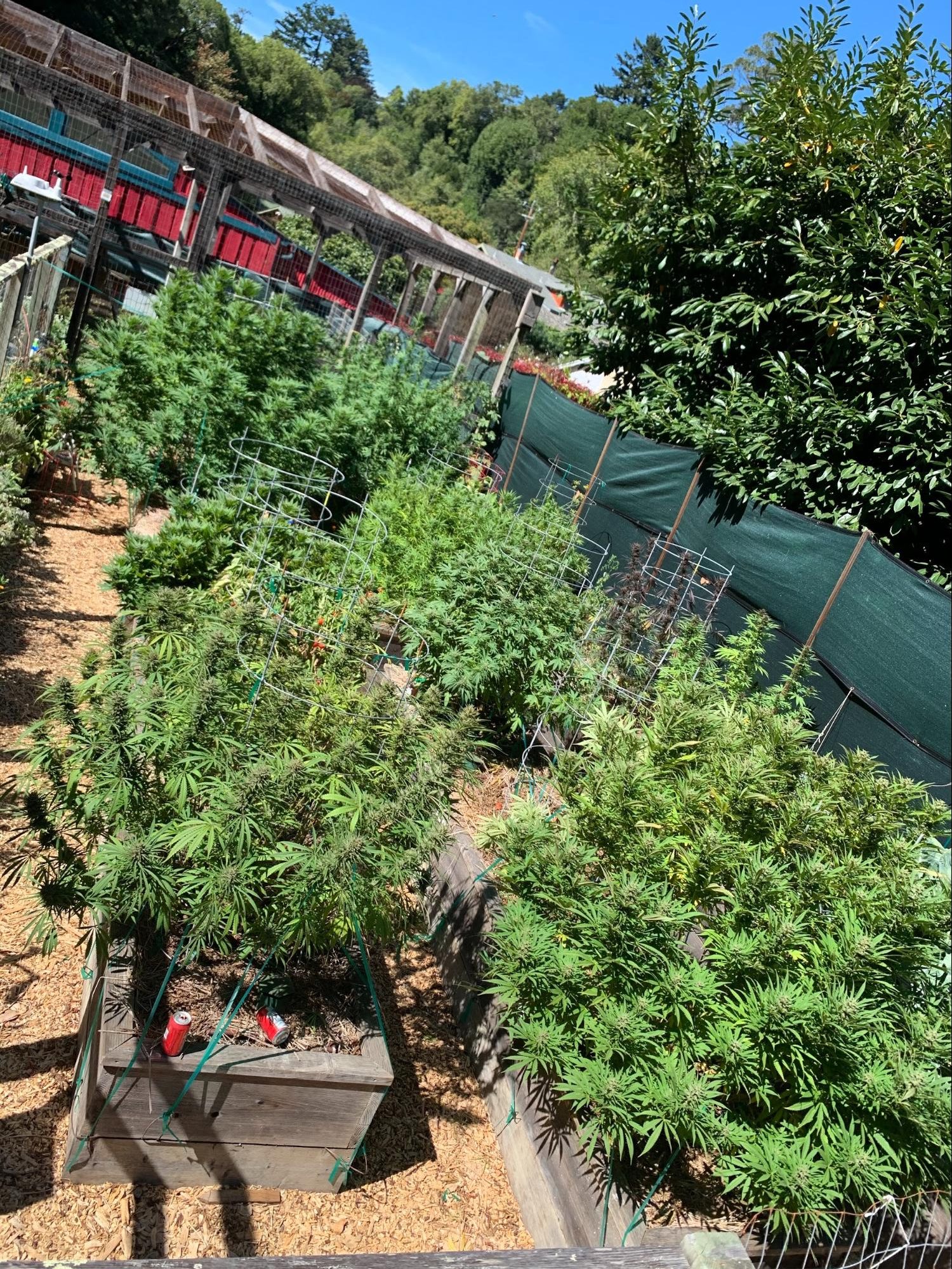