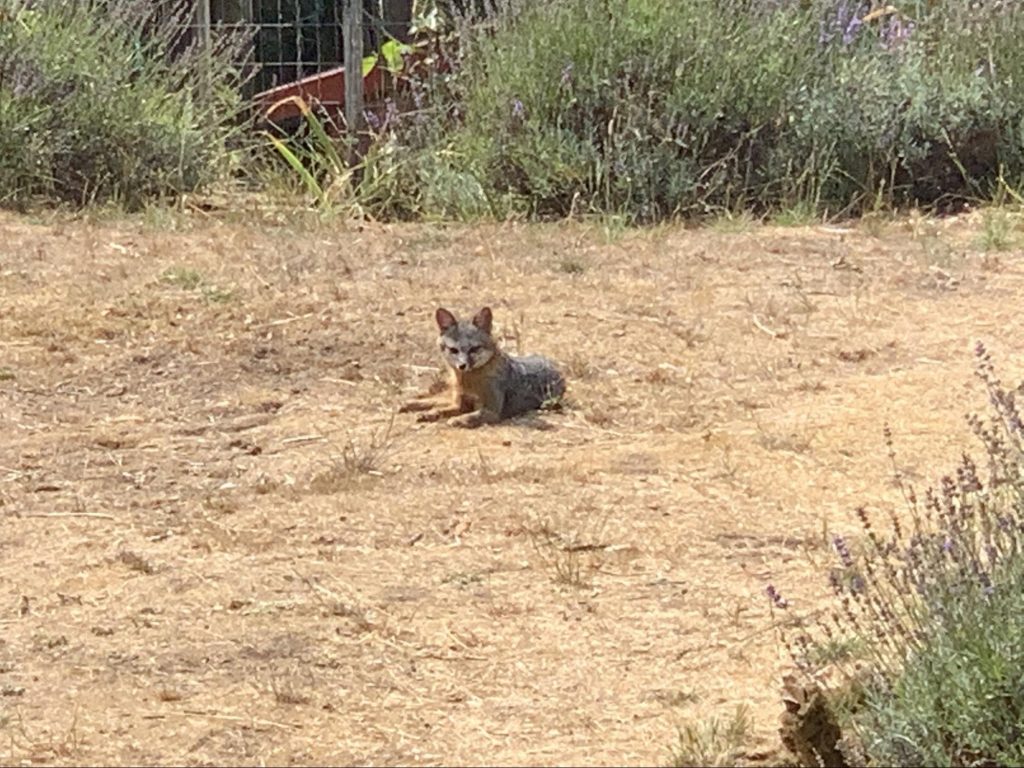 The kit is a constant around here now. Such a fine fellow. It watches while I prune.

As you read this blog, we are two weeks or less from harvesting our first plant, Shiatsu Kush. It will be good to have an early harvest plant to shake the dust off our trimming chops. Of course, we’re hoping that we’ll still be here to harvest. It appears this fire is going to be with us longer than anyone hoped or imagined. It is possible our fire will not be completely contained, or put out, until the fall and winter rains begin in earnest. That might not be for a couple of months. We could use a break in September.

All I can do is proceed as if everything in harvest takes place exactly as planned. Everyone out here has noticed that the people who have been evacuated so far, have no idea when they’ll be allowed to return home. Even for a visit. And the reason is because it isn’t safe yet. There’s only one road in and out of where we live, so it’s not like we’ll be able to sneak back in, if we’re told to leave. I’m realizing now that being evacuated could mean plants will turn ready without anyone here to tend them or harvest. This is a sickening prospect, but realistic, based on what we’ve seen so far. All we can do is hope and pray the fire does not jump the lines and move in any direction toward buildings and homes. It is important to remember that plants can be grown again. Our lives are more important than any plant I’m growing. All that said, I proceed as if nothing is going to stop this harvest. Between now and the first plant coming down, there is prep work to do.

Before harvest begins, a complete cleaning of the drying cottage will take place. The robot vacuum will be tasked to handle the floor, and I’ll scrub the walls, ridding any dust, debris, or remaining webs. Lines will be hung, though not all of them at first. By the middle of October, both sides of the room will have lines, plus we’ll have two large drying racks hanging, for overflow buds, popcorn and shake. 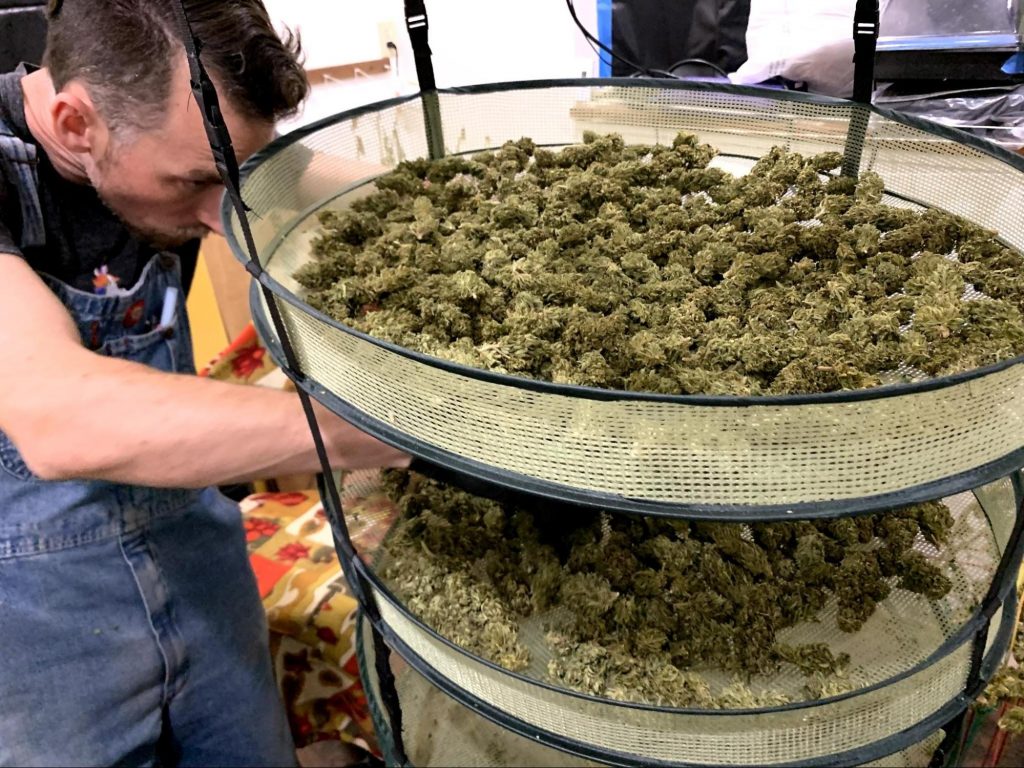 We prefer to hang every bud upside down. But when our lines are full, we’ll dry popcorn and shake on these racks. We’ll even dry large flowers by hooking them on the side of these racks and letting them hang down from there. I find drying on these racks to be efficient. If you care about bud shape, you don’t want large flowers on their sides. Because they are wet, they’ll flatten on that one side, unless you turn them often. Honestly, I don’t turn popcorn. If it’s flat on a side, I don’t care. Popcorn is only for edibles and tinctures anyway.

As I mentioned, we believe in hanging our flowers and allowing them to dry fully while upside down. This begins as soon as we’ve cut a stalk and finish the mold check in the beds before bringing the plant in for the first trimming, followed by a comprehensive wash. Once we finish our thorough visual check of each stalk, we cut them so that each stalk has an elbow that we hang outside on small tomato cages for bringing inside, and the initial fan leaf trim. We believe in getting the flowers hanging upside down immediately as much as possible through the drying process. 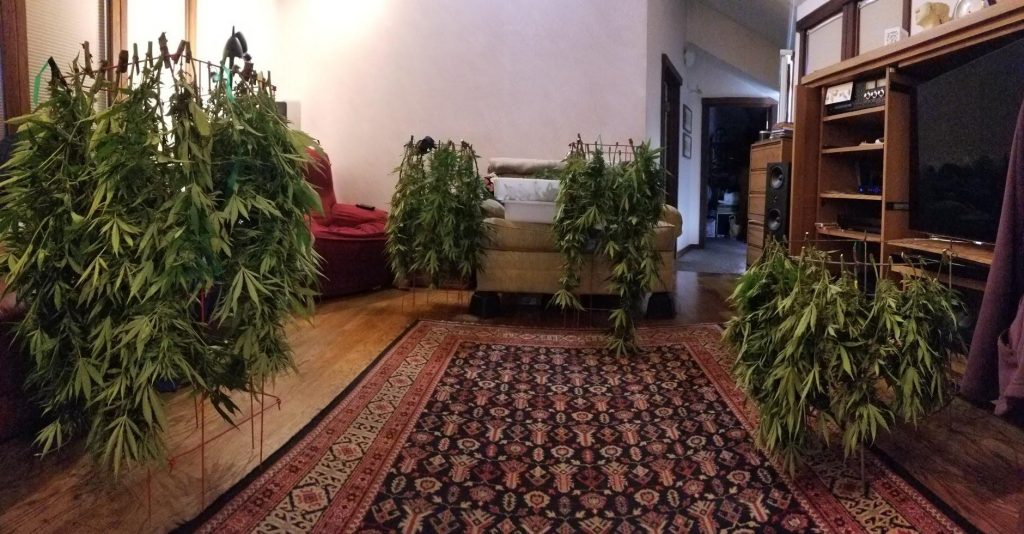 We put covers over all the chairs for obvious reasons. We also use trays for trimming that catch the kief. We are big kief fans; especially for those times when our pain needs relief right now. Kief sprinkled on top of a bong rip will enhance that hit.

So we are preparing for harvest even while we deal with increasingly complex issues in the beds. Case in point: Finding mold on a seemingly innocent stalk on RG 11. The only way you see this is by bending over, or getting on your knees and climbing into the center of the plant to examine every stalk. A couple of days ago, this is what Bee found: 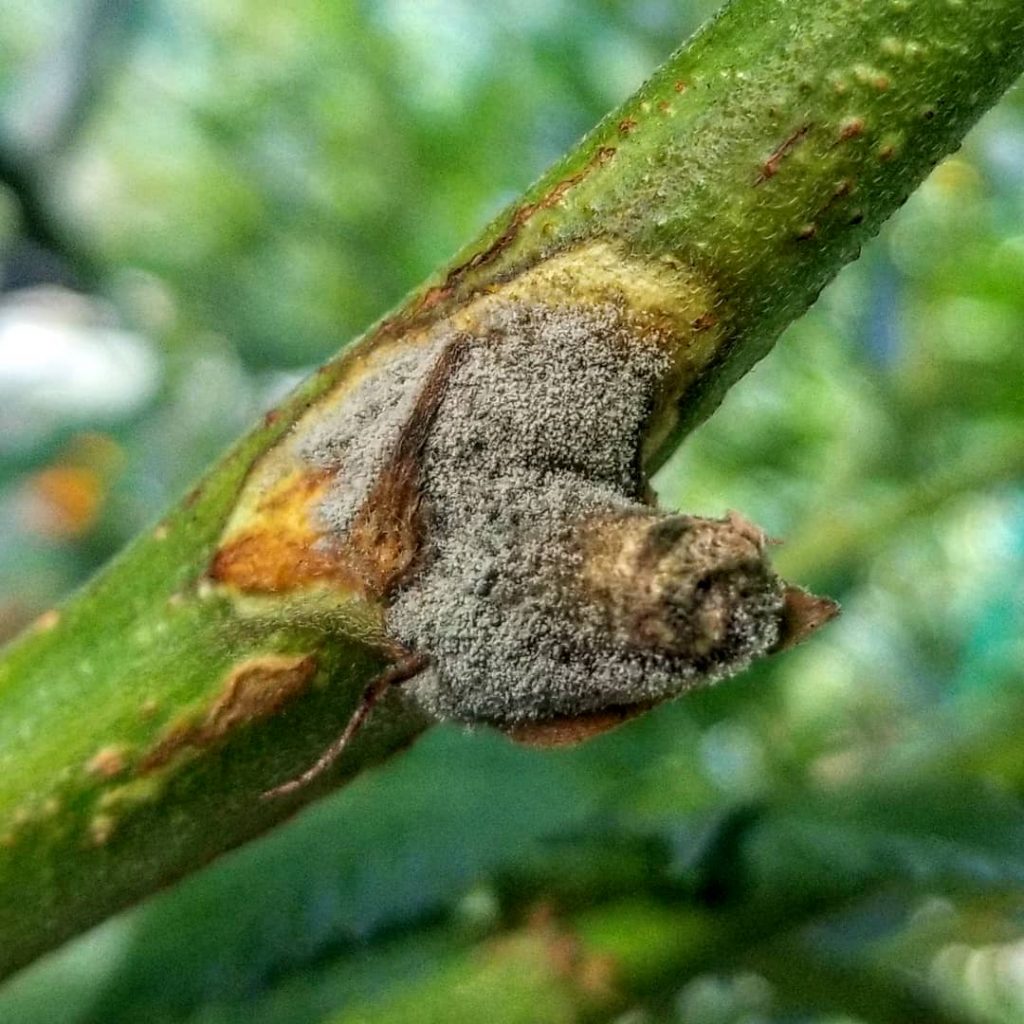 Not something you ever want to see on a flowering stalk. But early enough to catch and treat.

We’re pretty certain this was caused by a bad cut or sloppy pruning. If it wasn’t a clean cut, and it’s not sealed by honey, it’s an invitation for a pathogen. So, the straight edge was brought, the mold cut and scraped away, alcohol applied on the area to kill any mold, and organic honey was applied to the entire area for sealing. A couple of days later, it just looks like wood, and the flower is carrying on. If it had not been spotted soon, we’d have lost that branch at least. This is also what happens when a higher average humidity is maintained all day, as has been the case here recently. The humidity shift I’ve long written about arrived at about the same time as those lightning strikes from a couple of weeks ago. 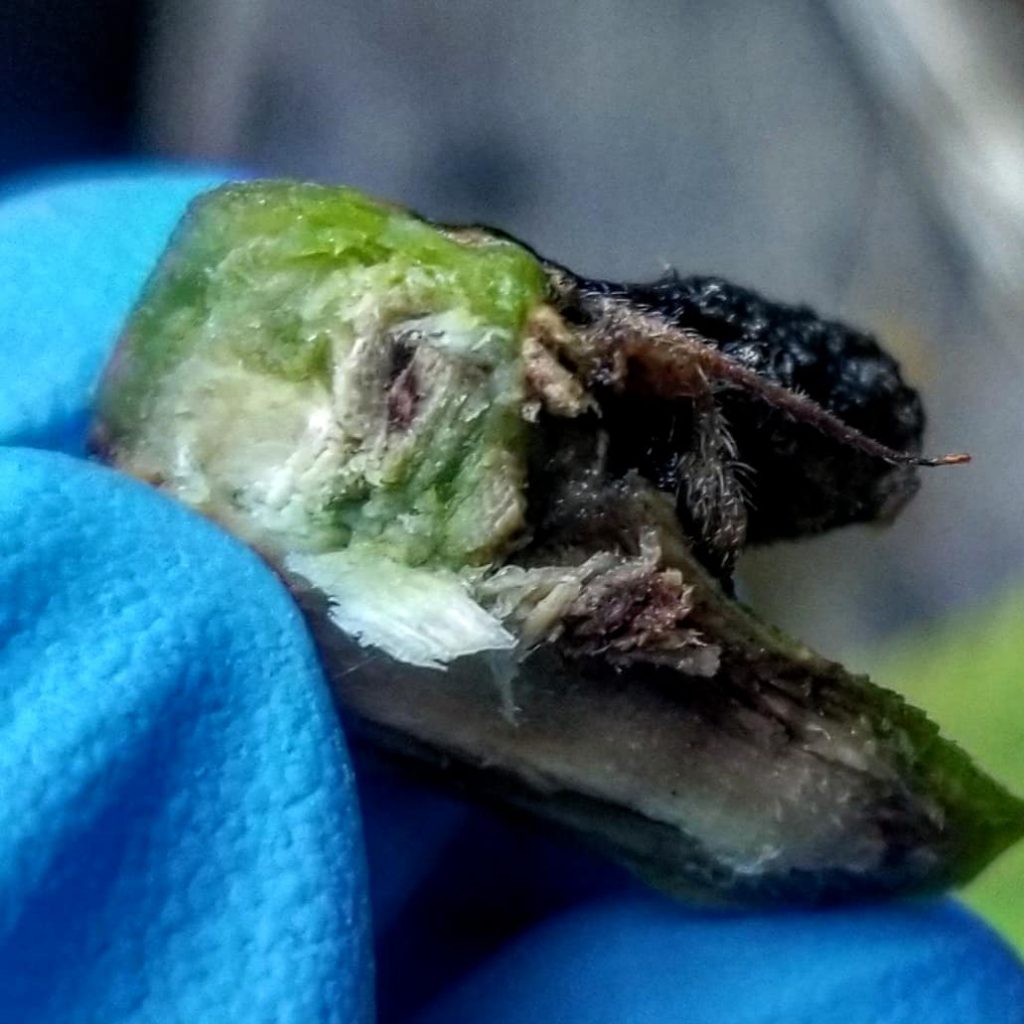 This is the cut off bit, showing all the mold. 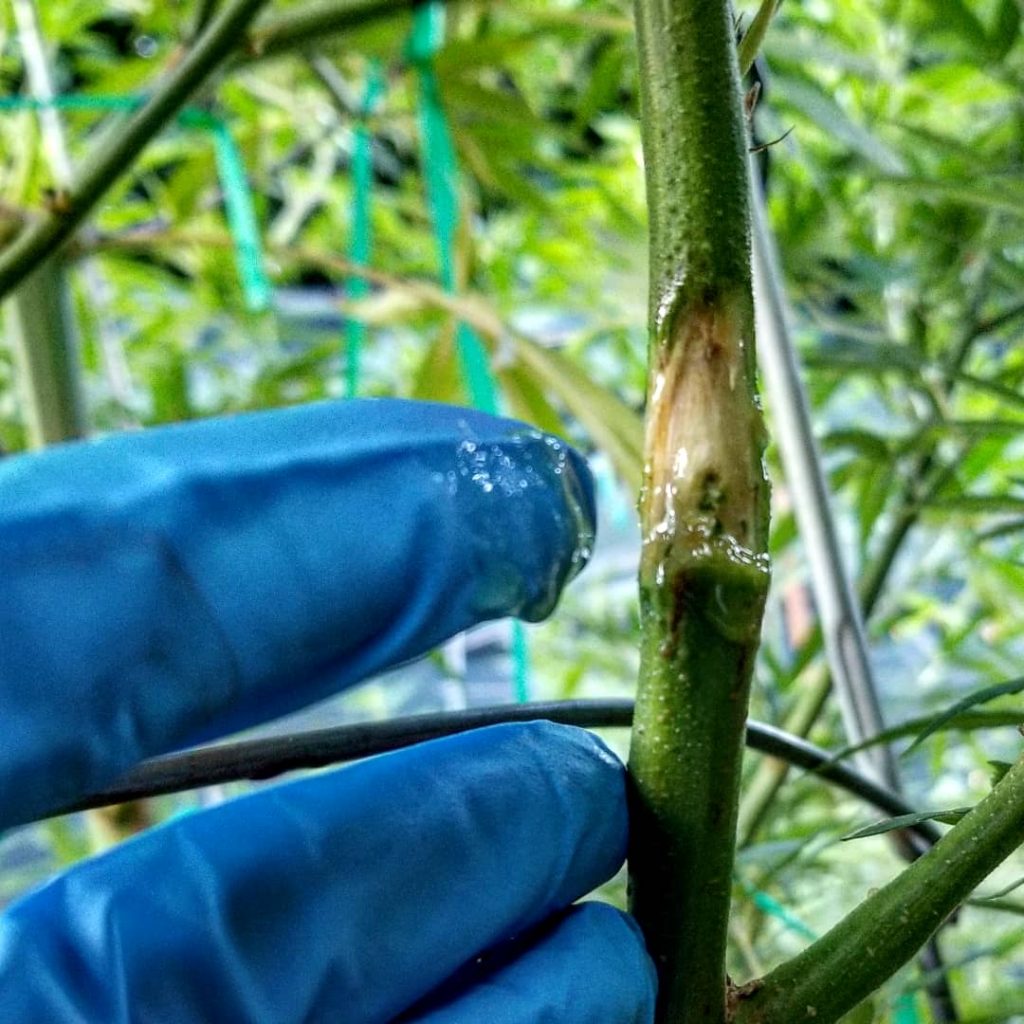 After applying the honey.

A while later. We will be keeping an eye on this branch, though all seems well now. 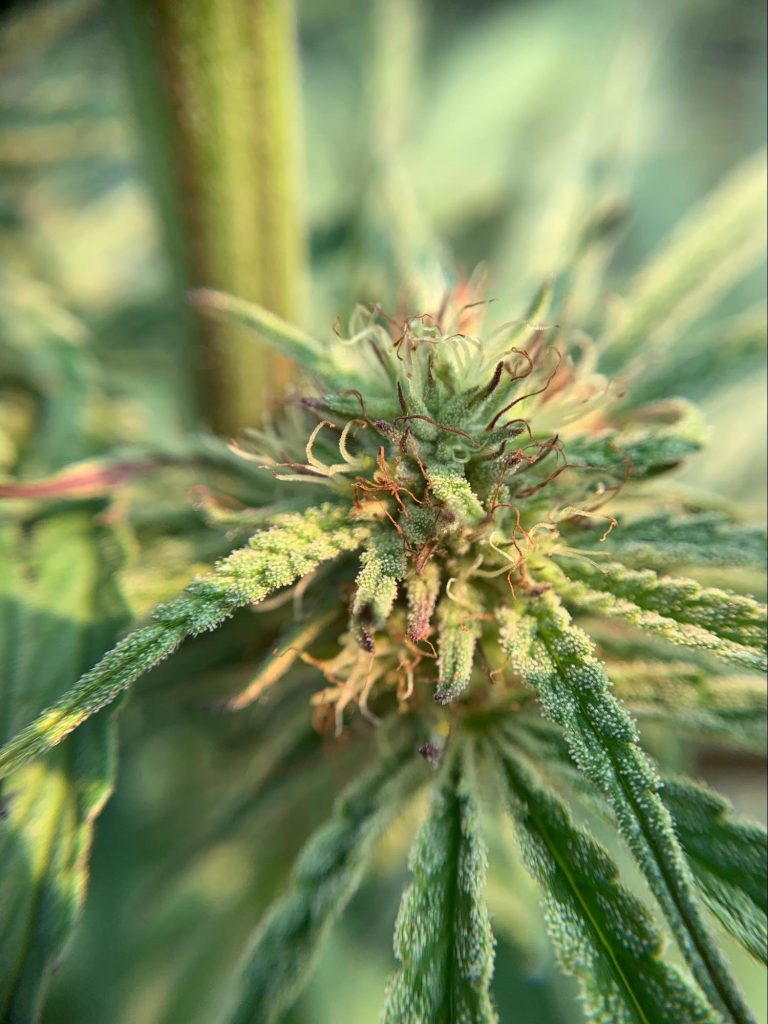 This is ACDC 7, displaying an impressive amount of trichomes on the sugar leaves, only three weeks into flowering.

Largely, there is harmony in the beds. I mentioned how ladybugs are all over RK 18, and it’s not because they are eating aphids. This seemingly perfect growing plant has apparently become a preferred vacation destination for amorous rendezvous. 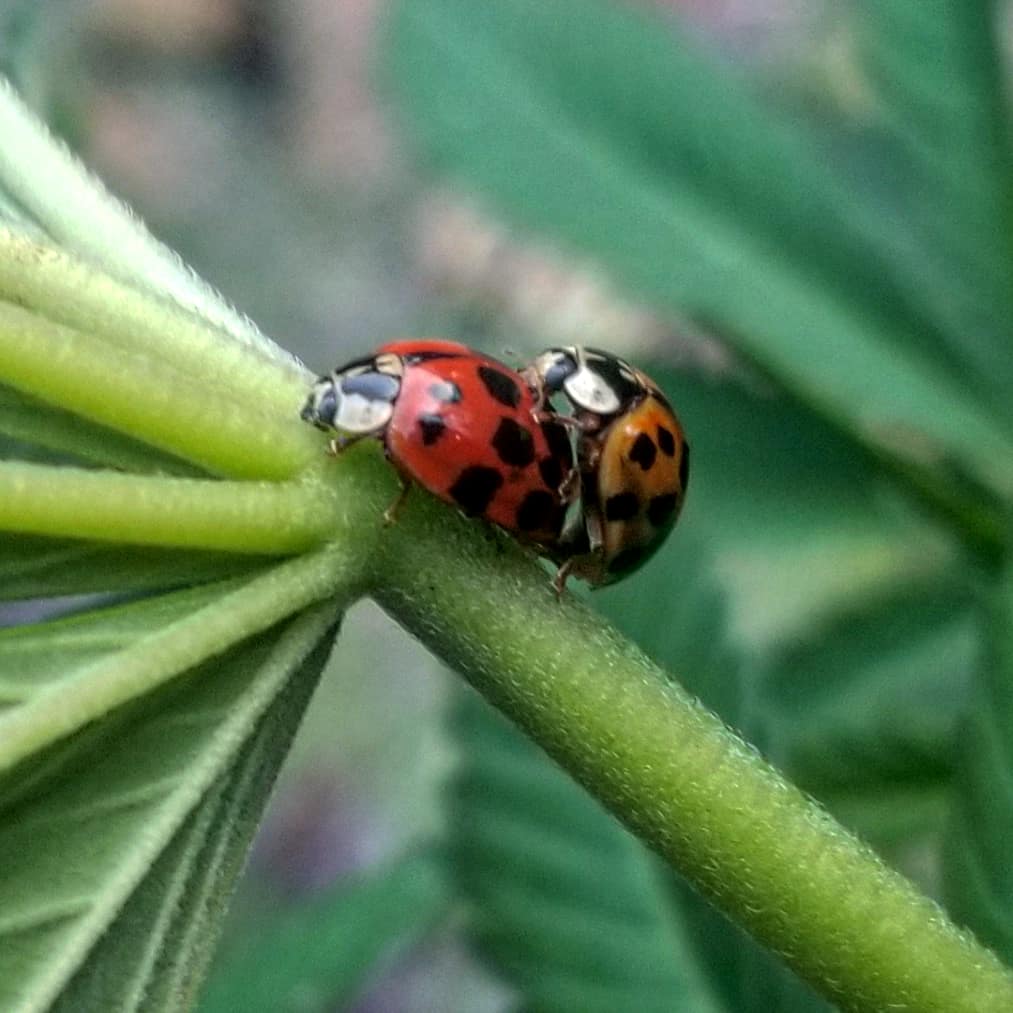 RK 18 has also gained a distinction that could only be proven by examining photos of plants from previous years. RK 18 has more in common with the plants we grew last year. They were almost all huge. However, at this same date last year, RK 18 is already larger than any plant from last year, or any other year. And it has only begun to flower. She has usurped the bed holding Shiatsu Kush, and the bed with ACDC 17. The good news is after we harvest the SK, we’ll be able to train RK 18 into bed 19, which will completely open the inner growth on the eastern side of the plant, receiving a majority of the sunlight. For the first time ever in August, two entire sections of aisles in our beds are now closed. I have to walk around them, because we had to allow branches from 18 to train into the aisles. I’m grateful this will mostly likely be the final plant to harvest. She will make for an epic finale. However, we’ll have to use the 3rd row to walk around her until she is harvested.

As you can see, she is now being trained all the way to the far edge of each aisle. Bee is tying plant tape to the garden fence, and to the beds and cage on the other side of the aisle. In two weeks, Shiatsu Kush will be removed from bed 19, and the huge branches on the east side of the plant will be immediately trained into that bed. The good news is by that time, there will still be six weeks of flowering remaining to RK 18, so there will be plenty of time for the inner flowers on that side of the plant to mature under greater direct sunlight.

Some of you will remember the video I posted a couple of weeks ago of this plant blowing in the wind. She has grown more than a foot in every direction since that video. I anticipate some compression at a certain point, as the plant stops expanding outward, and becomes weighted down by developing flowers. 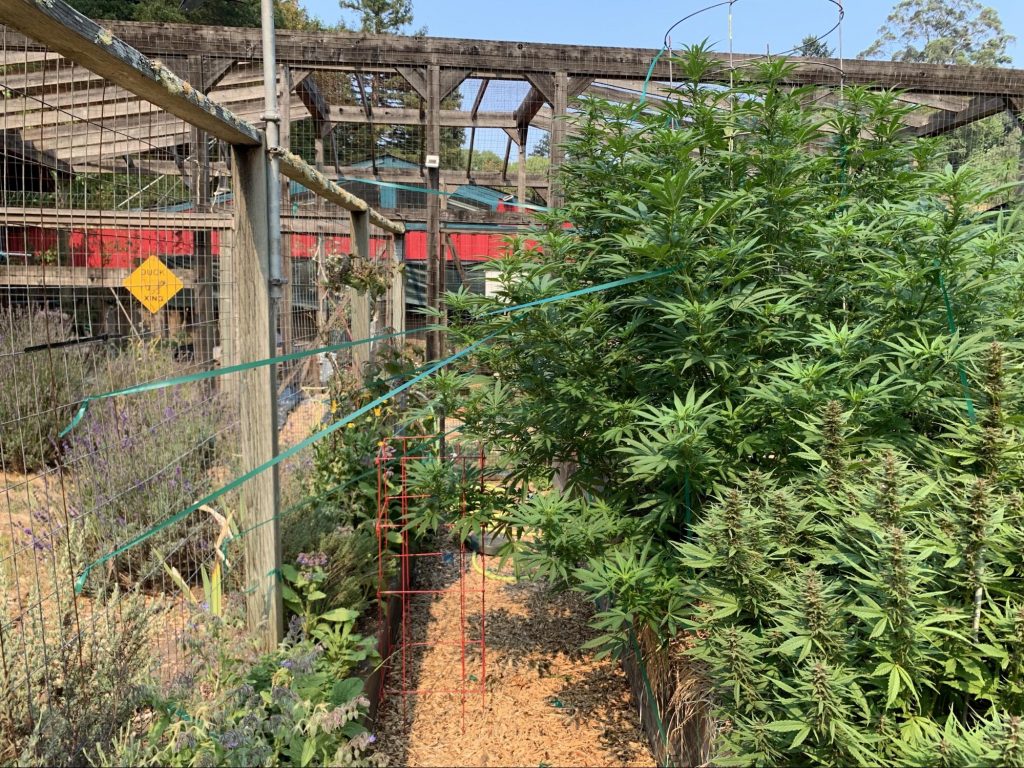 Using the fence for training has completely blocked passage of RK 18. 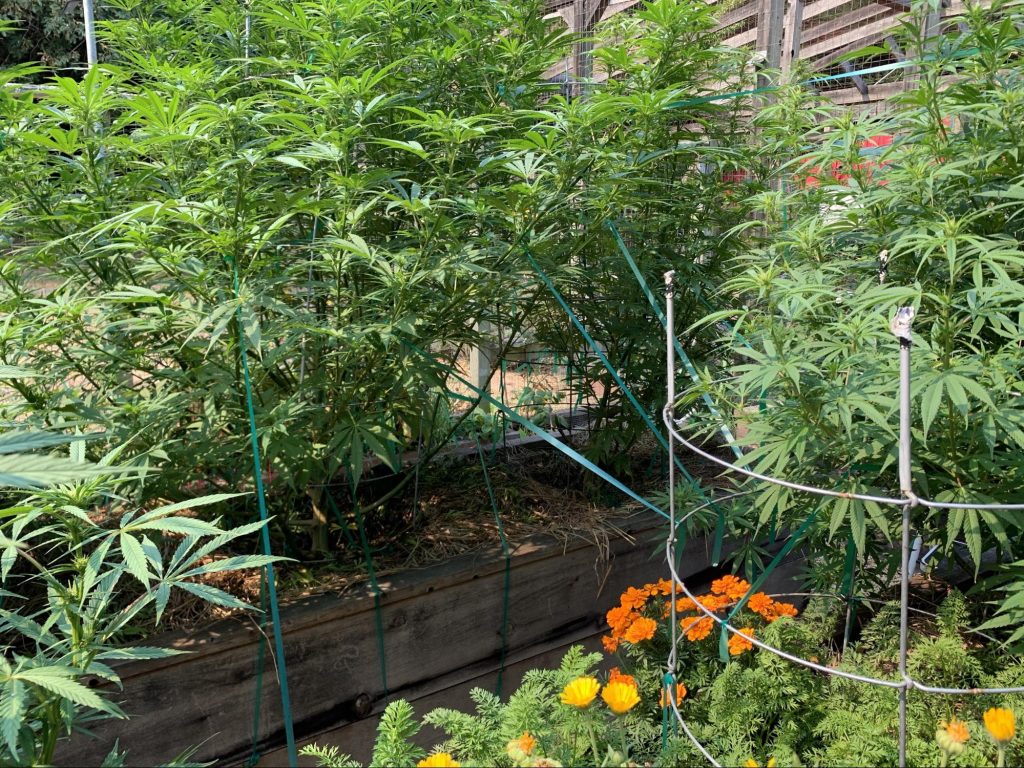 Here, plant tape is tied across the aisle onto the tomato cage, as well as the bottom of the bed.

We had a tour of the property by firemen last week, looking to give us suggestions for defensible space. So we spent Saturday afternoon watching our son, Ryan, cutting huge limbs off the bottom of redwood trees in the front of our property. Bee and I then carried the branches across the road to a designated spot for chipping. The chipper came by this morning. We also swept about ten trash cans of debris that had fallen off the redwoods over the last two decades. Bee did most of that by themself, though I got it started. The floor beneath the redwoods had about eight inches of plant debris that could not be easily raked. This needed a pitchfork and arms. It was an enormous amount of high combustible material resting in treacherous wait at the front of our house. I was honestly embarrassed to have this fire hazard pointed out to me, but grateful to have finally found the motivation to clean it up.

During this fire, it is a challenge to know when to go outside and do some work. There are times when it is simply too smoky to do anything. So we have to wait for bursts of breeze that move a pocket of smoke away from us, even for only a few minutes. We’ve all worn the N95 masks out there to prune and inspect, but I’d rather wait until the air is clean enough to do the inspection without a mask. When the air is really bad, we don’t go outside for long. Like, a minute or two.

Had a momentary bolt of fear during a random inspection last evening. I was looking at ACDC 17, and in the foggy, smoky, dark lighting, it appeared as if the flowering tops on this unique ruderalis were turning black. I felt a rise of fear in my throat, because I had apparently not noticed a plant with what appeared to be something sinister growing. I’m not used to anything too dark emerging from the tops. It looked like something was systemically wrong with this plant, and it had seemingly happened over the space of only a few days. For example, look at the photo from this same cultivar in my Making Medicine blog. The darkening was starting, but had not become nearly as prevalent as it is only a few days later. It took the mag lens to show what is growing on that plant. The flowers are showing tons of purple and magenta. I have not grown an ACDC with purple. The other two ACDC I’m growing have flowers that are much more familiar to me. In fact, those two plants resemble the Cannatonic component of ACDC lineage. The other two do not look like any ACDC I’ve grown. Purple? And this color is not from colder temperatures. It’s in both the plants in beds 8 and 17. Each has a deep developing fragrance.

So, we’ll anxiously await the test results on these plants. I can’t wait to see the cannabinoid profile of all the ACDC; but especially these two, ultra ruderalis type examples. 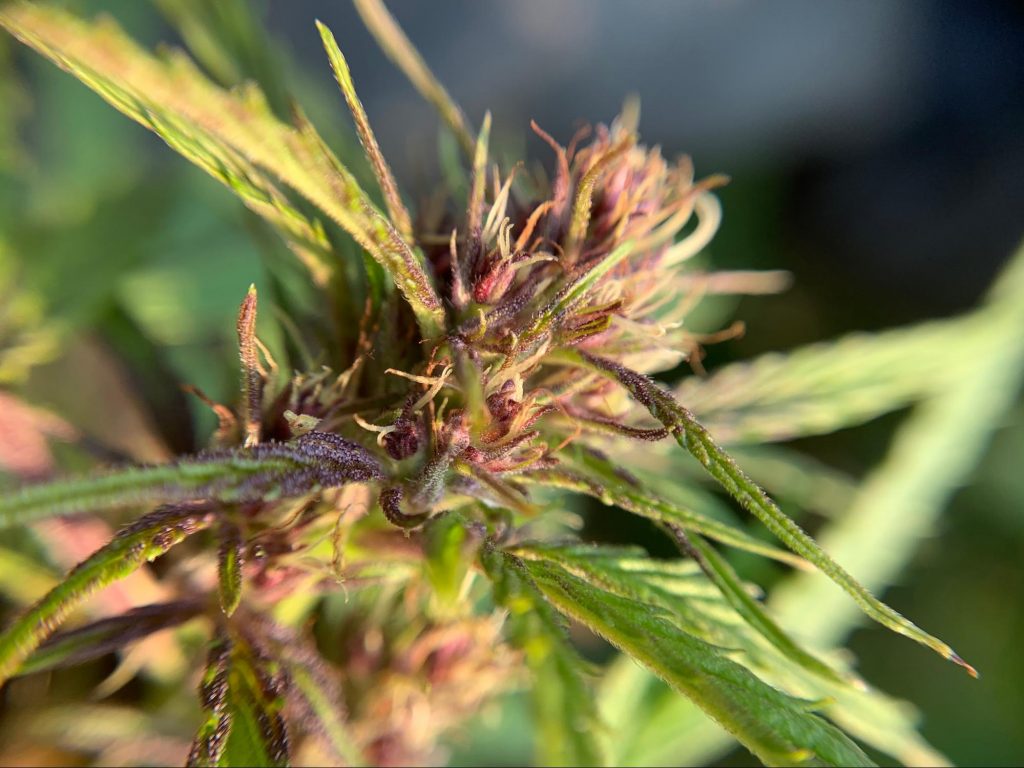 ACDC 17 getting all purpley on day 23. Most unique plant I’ve grown. Weird. Exciting, too.

We proceed as if there is no fire. Hang with me, everyone. These last two months are going to be even more challenging than a usual harvest. Right now, I simply hope we’re still here to bring this crop inside.

Stay safe, everyone. Survive and vote. Back on Friday. 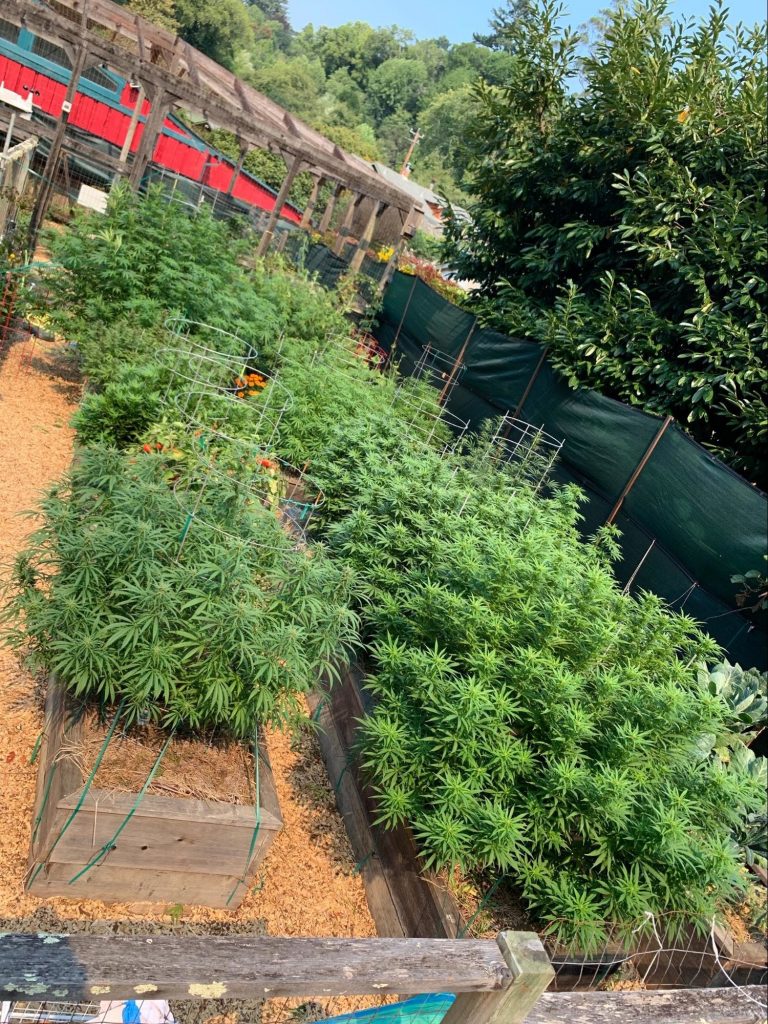 70.7℉ 21.5℃ 52% humidity A little smoky. You can tell if you compare the color of the wood chips in this photo to earlier photos where there is no fire.