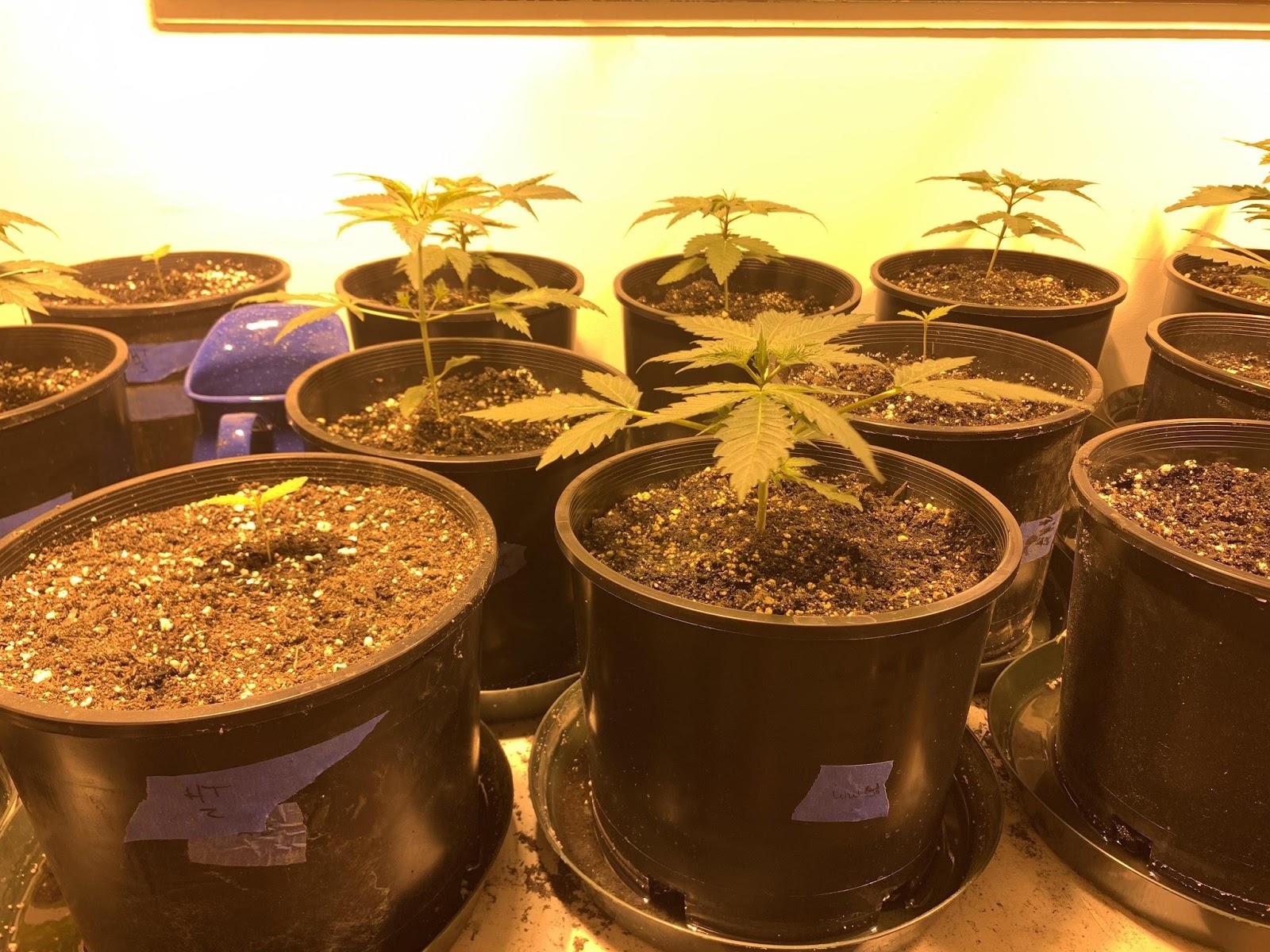 I start normal cannabis seeds (as opposed to feminized) wrapped in tissue, in a heated grow mat compartment. I spray each tissue and compartment with a mixture of water and hydrogen peroxide. The proportion is ½ cup of 3% hydrogen peroxide per gallon of water. This is the only water my sprouts receive until they are moved outside to the beds. The purpose for this mixture is that peroxide helps protect sprouts from any bacteria in the soil. I keep the tissues wet all day, and give them a major spray before I go to bed. As soon as I’m up in the morning, I’ll be out there spraying again.

I don’t start feminized seeds when I start normal seeds, and I also don’t use tissue for the start. I put them directly into three gallon pots and keep them wet. They’ll sprout, and if they don’t, start another. I wait two weeks before starting feminized seeds. They don’t need sexing, and my personal opinion is they like being put outside at four weeks, and not six. I’ve had feminized plants that I grew for six weeks inside, taken them outside and they immediately tried to flower. They have not tried to flower when I put them in beds after four weeks. I have no scientific basis for this. It’s only what has happened to me.

When putting seeds into soil, either immediately, or after sprouting, a couple of very simple tips will help insure your success. First, before putting a seed into soil, WATER THE SOIL FIRST.

I have lost my fair share of seeds over the years, by watering after I put a seed in dirt. If you water first, then plant the seed, it won’t sink. It will stay in place.

Second, when planting the cannabis seed, plant it with the crown up, and the pointy end down. This will allow for an easier opening, emerging, and pushing of the neck toward the surface.

I’ve had seeds take up to a week before opening, so I just keep them moist. I’ve also had seeds sprout within hours of the first soak. (I almost always cynically think, here come the males) I generally wait for the second day after a seed sprouts before I place them in soil. I like them having a bit of a neck before burying.

Again, the only water they get during this entire phase is the water/peroxide blend. I also only administer water via spray bottle when the sprouts are so young. Pouring water at any point when sprouts are young can cause sinkage into the soil. Gentle spraying keeps the soil moist and undisturbed.

It is vital to keep the seed moist. If sprouts are allowed to dry, they cannot be revived. But just as hazardous to sprouts is allowing them to germinate too long prior to planting. For example, if you wait until the cotyledons (the first leaves) are visible, you will have a difficult transplant with a fairly high probability of root damage.

The greatest threats the first couple of weeks are lack of water, or over-watering. However, those are not the only threats, as I discovered last year. One of the most important additions I made to the growing cottage was to purchase a temperature and humidity gauge that would send this information, via RF or radio frequency, to a monitor inside my house. I keep it close to my desk. That way, I can see the temperature and humidity in the cottage while I’m inside my house. This simple device has saved my plants more than once. Last year, when sprouts were only eight days old, just babies in cups, I noticed the humidity in the cottage was down to 17%. I looked at my weather device and sure enough, it was a very low humidity day.

In the cottage, I have a dehumidifier, so the humidity never raises too high above 50%. But there is no way a dehumidifier can raise humidity. When it’s low humidity outside, it will be the same inside the cottage. Sprouts will not survive in super low humidity, so I had to improvise. I grabbed a couple of bath towels and soaked them with warm water. I wrung them out as best I could and then hung them in the cottage. Within an hour, humidity in the cottage had raised to over 40%, which is fine for the plants. I lost two sprouts that day, but saved the rest. I had to put wet towels in the cottage, morning and night, for almost a week, until the humidity normalized outside.

So, it is a wise investment to have something to monitor the temperature and humidity of your growing/drying cottage.

Grower’s tip:  When the second full set of cannabis leaves are established, that is the time to carefully cut off the cotyledon, the baby leaves. Cut them off as closely as you can to the stalk, without damaging the stalk. Cutting the baby leaves off will boost the general growth of the sprout. It is the first pruning of the plant

This year’s grow has been planned since the end of harvest last year. 2020 is the year I rebuild our CBD portfolio. I have grown every major CBD cultivar, including all those listed by Wikileafs and others as the “best” plants for Rheumatoid Arthritis. There are so many new CBD cultivars arriving each day, there is no way I can keep up with them. I focus on the cultivars that have had the best results for us. To that end, every plant I’m growing this year, including those high in THC, with little or no CBD, has shown medical value to us over these four years of growing.

FYI: Grandpa George and Oak Kush are indica hybrids that we primarily use as sleep aids. They are also two of the most lovely and logical plants we’ve grown. In particular, Oak Kush is one of the finest designed plants I’ve ever grown. You’ll see why when she flowers.

The other THC plants I’m growing are all either 50/50 hybrids, or 60/40 indica hybrids. We enjoy our sativa in moderation, and our indica to be decisive. We also made a discovery last year about White Widow. She is one of the best plants I’ve grown where shade plays a factor. She loves growing in our beds and as a family, we’re happy to grow this cultivar. We’ll probably grow White Widow every year.

Two cultivars (CBD God, and Bubba God) originated in western Canada, in a climate similar to ours, which is why I selected them. It makes sense to grow plants that are grown in regions similar to your own.

Three of the cultivars I’m growing are in feminized forms. AC/DC, White Widow and Rainbow Kush. I won’t start those seeds for two more weeks.

I will hopefully be growing Shiatsu Kush again this year. If you look up this cultivar, you will discover a fascinating origin story that I will not spoil for you. But where it was grown, and specifically what it was grown for, was a major motivation in trying this a few years ago. Now, it is one of our favorites and I can’t wait to grow her again. I tried last year, but could not crack a single shiatsu kush seed that wasn’t male. Shiatsu Kush is another cultivar selected, in part, due to where the plant began, on an island off Japan. Again, a coastal environment similar to ours.

I will detail last year’s epic male seed festival when I blog about Sexing. I will give a hint: Of 70 seeds that cracked open last year, 63 of them were male.

That’s way too many pollen sacks for this grower.

However, the amount of light will be reduced in the cottage by five minutes every day. This is how I train my starts for the amount of light they will receive outside. If I left them under lights for fifteen hours, then took them out to the beds, where they get between 12-13 hours, the shock of that much less light could cause young plants to try and flower. So, I reduce the light by five minutes a day until it’s down to 12 ½ hours of light inside the cottage. When I take them out to the beds, they actually start receiving more light outside than they were getting inside for the last couple of weeks.

As chronicled in Compost Teas, I know how to deal with plants that try to flower, but ideally, they have been trained, and transition smoothly to the sun. One thing is certain, once a plant connects with the sun, and she’s getting enough light, she will not flower until the right time.

Everything went on in the cottage via the timer as it should, except for one vent fan that did not winter well, and burned out this morning. A replacement fan is on the way.