Look at the damage to the top of RK 16. One insect could not do all this. I consciously looked at that top two days ago and did not see this level of damage.

It looked like this plant had been visited by a small cluster of western cucumber beetles. Where had they gone? They would not just leave a source they were munching on to this degree.

I bent over and a couple stems down and under a generous fan leaf, they were huddled together, and not moving. Too full, I surmised. When I reached for them and they did not react, my suspicion was confirmed. I squished all three western cucumber beetles. The plant will grow past the damage, as long as the damage is not allowed to continue. This year’s battle is on. 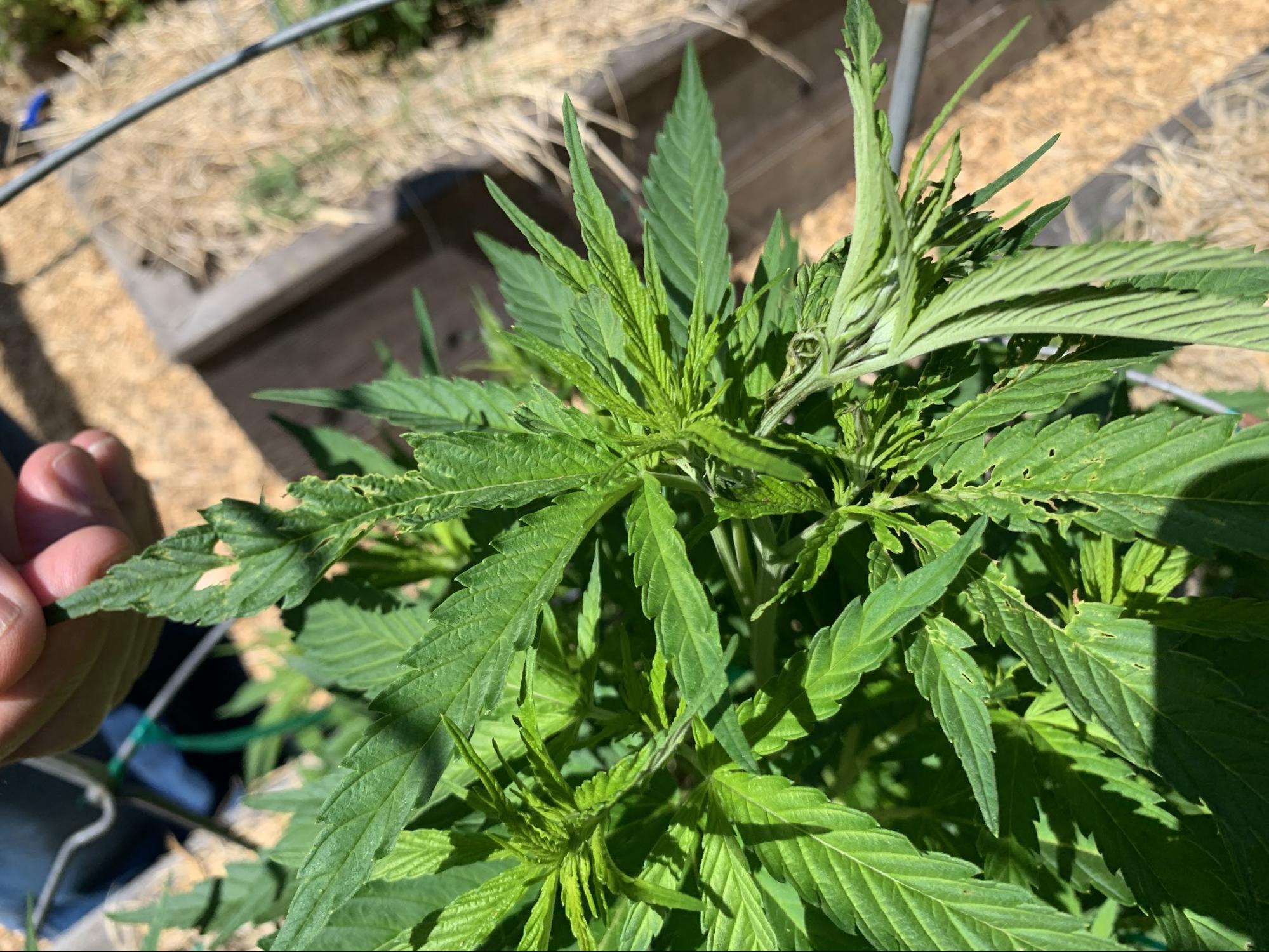 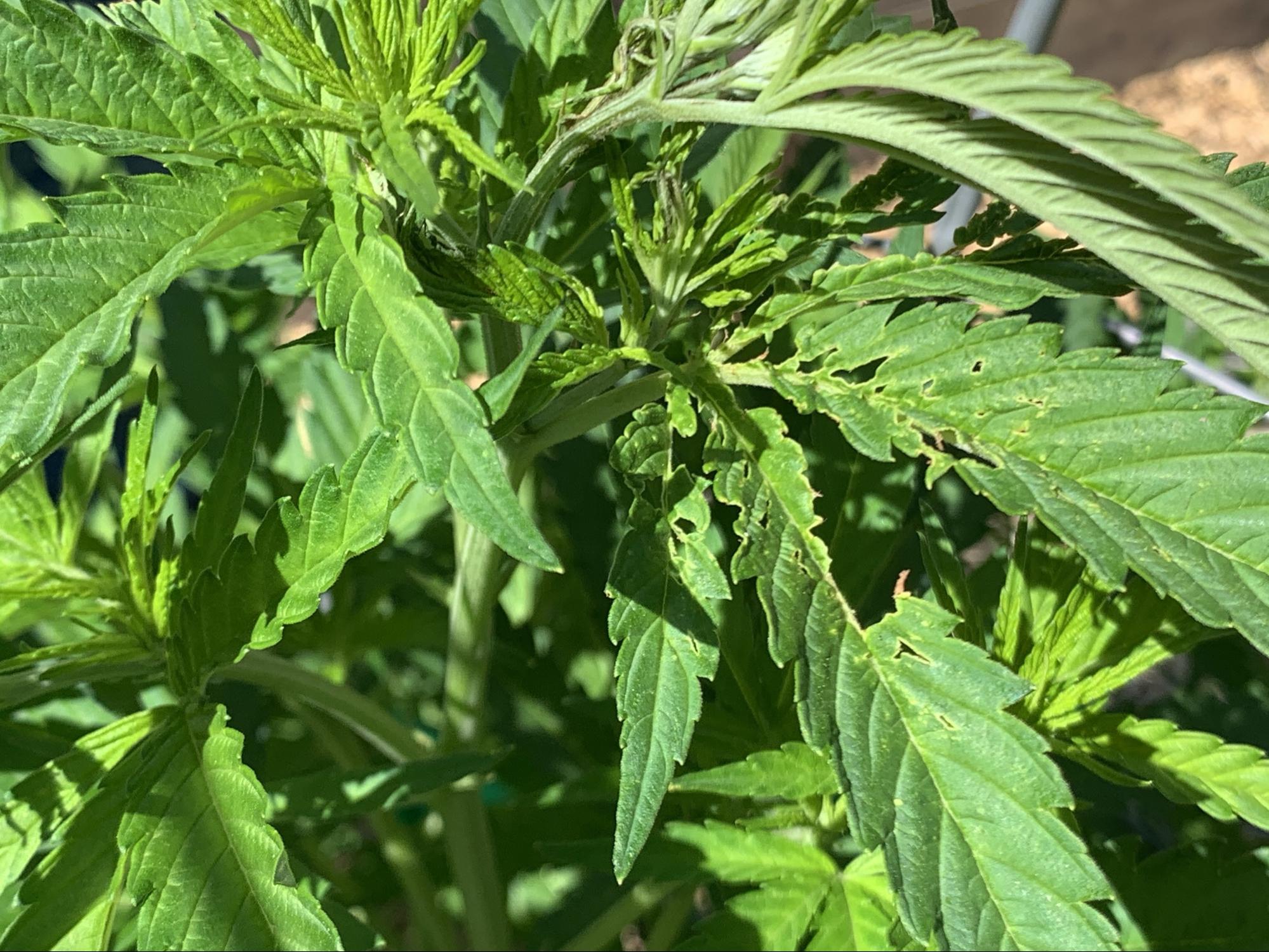 The valley is full of baby crows this morning. Their repetitive cries are the first things heard today at just after 5:30 in the morning. The pleading, repetitive calls reminds me of the slurping sound of our draining bathtub.

I put nine of the 13 plants in beds one month ago today. The second month in the beds will begin to reveal the potential for each plant. This morning brings the weekly watering, followed by pouring tea. There will be increasing winds all day, windy night, and a very windy Sunday, before next week again presents calm and warm conditions. I can always relax a bit on windy days, so this weekend looks nice. Every week from now on will bring an increase in responsibility and work.

A decision for later today (though I think I’ve already decided), is to tent RK 16 for a couple of days. Found two more cucumber beetles on her ravaged top this morning. This plant seems to be getting targeted. Why her and not so much the others I have no idea. But once they get the idea that this is free food, they will return.

Everything else is growing as it should, including all the AC/DC, though some are growing slowly. Bed 22 is really taking off, and that excites me. They all have a good two months before they start to flower, so there is time to catch up. I wish I had a spare camera I could dedicate to AC/DC 17 with a time lapse, just to watch her fill in.

RK 16 is now tented. Three more cucumber beetles found and squished prior to tenting. They were definitely targeting that plant in small clusters. I will be on alert for the other plants the next few days. I’m prepared to tent them all, if the number of beetles rises over the course of the day. Interesting thing about tenting plants: It slightly increases the mean temperature under the tent. Plants we’ve tented in the past have grown well while under cover.

Note to growers:  This is not a problem you can leave for a few days. This is not a problem that will just go away. Once these pests target your grow, they will not stop until you stop them, or give them a compelling reason to leave. Tenting the plants stops the onslaught, and it allows them to lose interest and look elsewhere for sustenance. It’s not all western cucumber beetles that do the damage, it’s principally when groups of them form clusters that target plants; especially when the plants are younger than 16 weeks.

This is a Shasta daisy. They grow wild everywhere out here in summer, including our property. Lovely to look at, but please be forewarned: Do not pick this flower and lovingly place it in the hair of someone close to you. Unless you enjoy sitting next to the smell of unwashed feet. Because that’s what Shasta daisies smell like, or perhaps worse, and in the interest of blog decency, I’m sparing you other descriptions. You have been warned. 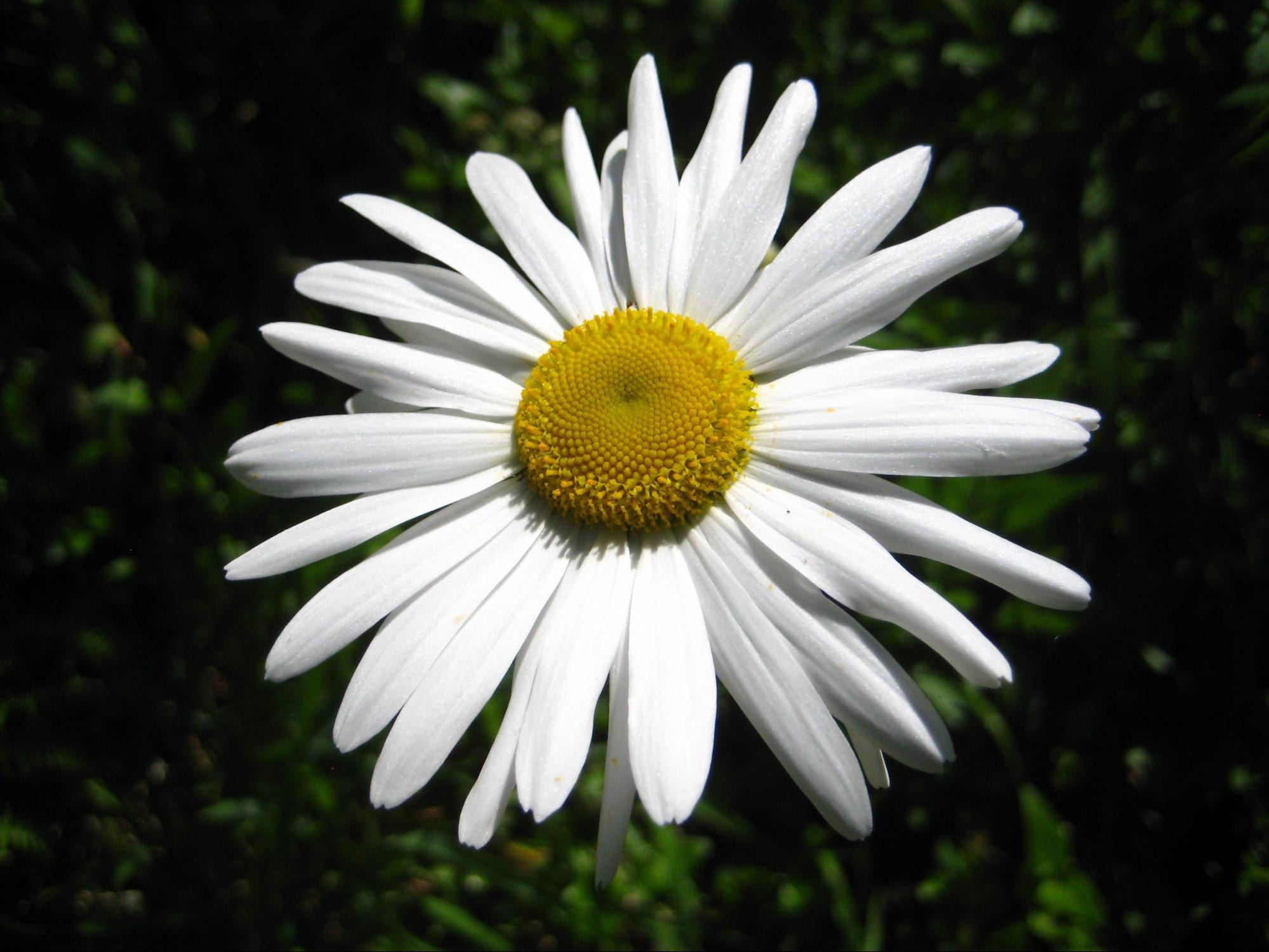 First, RK 16 survived her night of tenting, and I think I’ll leave her tented today. It’s going to be a very windy day, so I’ll button down her covering and let that wind carry her assailants to a more permanent home.

Hoping to get dragonfly photos soon. I’ve always loved them but did not know how many colors they can be until living here. Did you know they can fly over 30 mph? They can hover, or fly forwards and backwards. Dragonflies and bats are the primary reasons we don’t have a mosquito problem. We had a dragonfly pass away in one of the beds two years ago. Ants quickly emerged from the loam, that we had no idea were in the neighborhood, and consumed the insect over two days. Immediately after the dragonfly was gone, the ants submerged into the bed, and went I know not where. A tip of the hat from this gardener to the clean up crew.

Today is all about the wind. Plants are getting whipped, and I’m grateful to not be out there much today. This off day on Sunday is an excellent idea.

We have passed the point of casual observation in the beds. There’s plenty of that, too, but with the tenting of a plant, the ante has been upped. Much closer inspections have begun. Bending, lifting and looking is now required. Every single day.

Removed the tent from RK 16, and to my eyes, it looks like she grew quite a bit. Two days ago, she was pretty much the same height as the Sour Tsunami next to her. She’s a good 2-3 inches above Sour Tsunami today.

A reminder that all the feminized seeds started later. In the case of RK 16, she began two weeks behind all the others. She is beginning to pass them, and I suspect this will continue.

AC/DC 8 is showing the same type of rebound as AC/DC 22. Lower veg growth is emerging, and my hope is that 8 will soon be in the same furious sprint as 22. They look similar to each other. On the other hand AC/DC 7 and AC/DC 17 are similar to each other, but completely different from either 8 or 22. Both 7 and 17 have a much lighter hue to their leaves, and a more leisurely growing pace than I’m used to from the other plants. The lighter hue would concern me more if it came from a different cultivar. I would suspect something is wrong with the soil. But I’m probably two years removed from the type of soil issues that would cause a plant to change hue. No, this is the particular seed doing whatever it was bred to do. I suspect the color will deepen as it develops, but we’ll see. AC/DC 7 was topped two days ago, and she is responding. Her pace is simply slower than the others, but she is growing steadily. Her form is excellent, and her leaf structure is actually more solid than AC/DC 17. AC/DC 7 was the seed that emerged later in a pot, so though it was started on the same day as 17, it did not emerge until weeks later, and is, therefore, the younger plant. 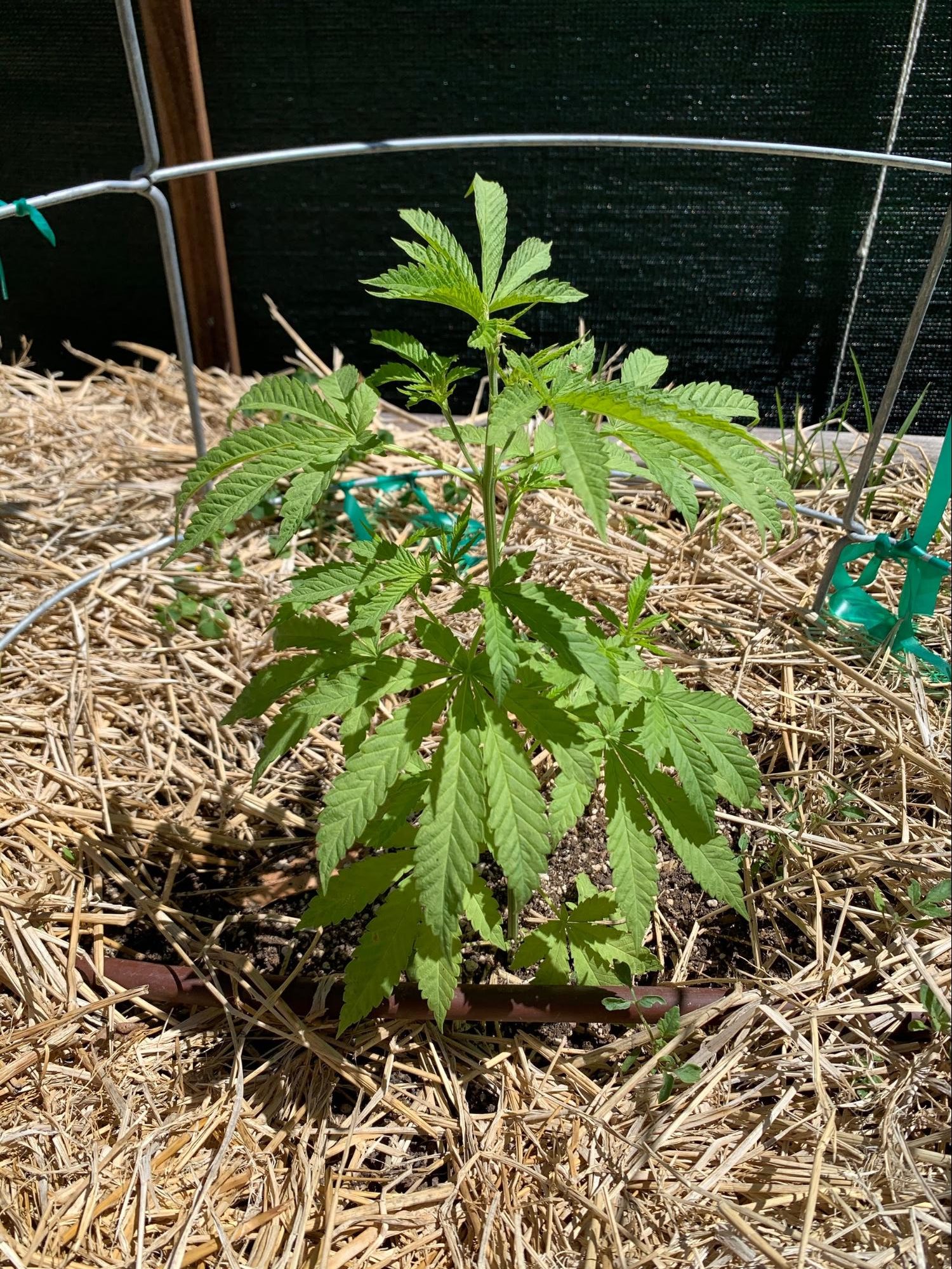 As this is the first year I’ve tried growing these particular feminized seeds, I will reserve judgement until after harvest and testing. I also know that feminized seeds can be tricky and sensitive. To this point, none of these cultivar have grown as I expected. But it is a long growing season, and each of these auto flowering plants will choose the path best suited to them.

With every other plant in the beds that are not ruderalis, I know they have a finite growing period, and a preferred flowering time window. We know certain cultivars will grow and flower faster than others. That’s how they were designed. Ruderalis will flower when it wants. It can flower early, or it can extend vegetative growth into early September. When that happens, those plants won’t be harvested until early to mid-November. I expect the last plants I’ll harvest will be the ruderalis; especially the AC/DC. So I am again reminded of patience.

There is a windless, calm work week ahead. Nice for growing, but I also notice that Thursday will bring our first day where the humidity might remain above 75% for the entire day. If this forecast continues to look accurate, I’ll probably do a Regalia spray on Tuesday or Wednesday, to deter any wayward pathogen looking to set up shop.

This is a few months late, but it was way back on April 8 when Oaksterdam invited me to do this blog, and that is also the date I began writing for the blog. April 8 was another significant day as well. It was the last Supermoon until the end of next year. This supermoon was also known as the pink moon. 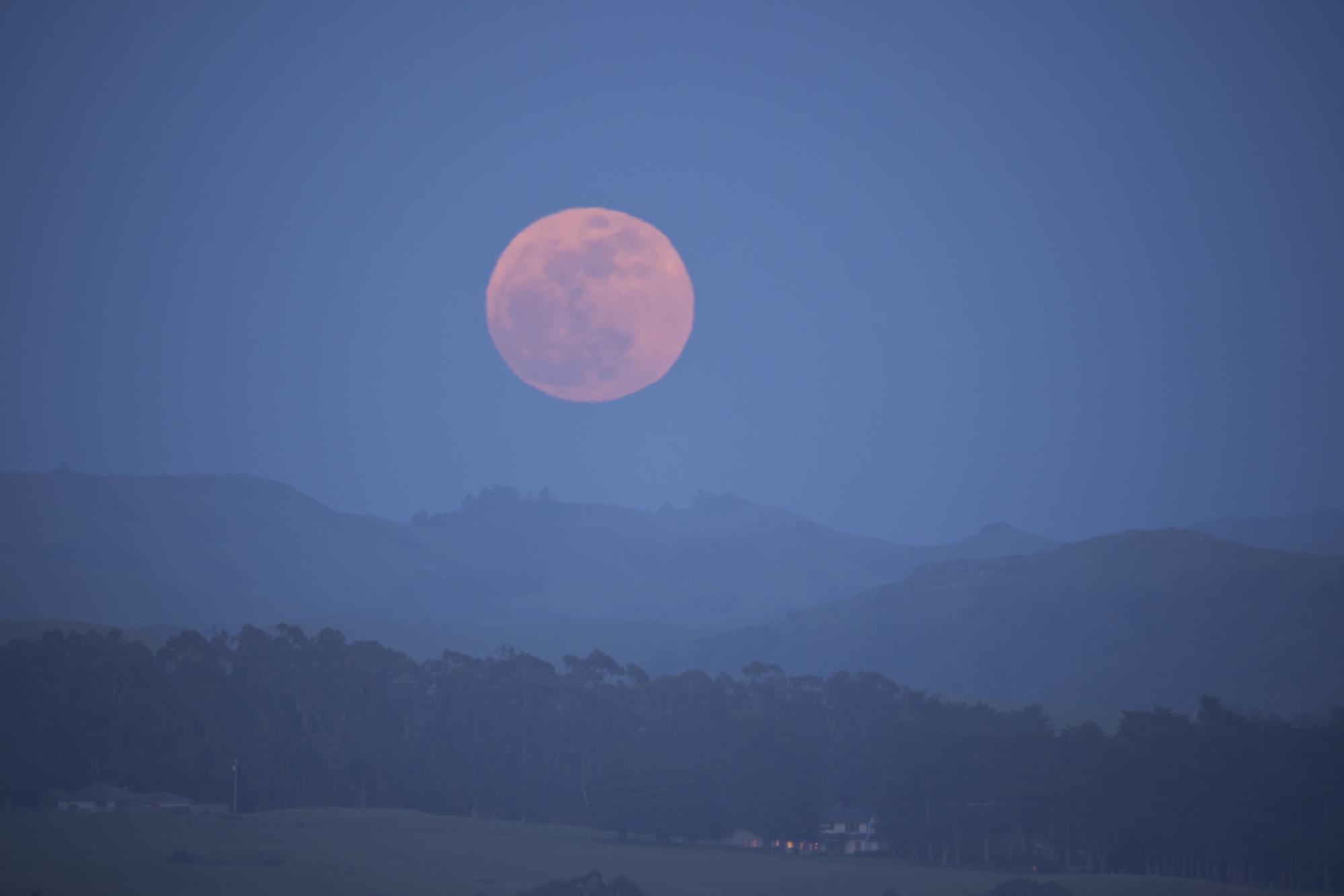 Ok, work to do, and also a podcast to prepare for. I was invited to appear on author Christine Lee’s new podcast, starting possibly in late July, or early August. This old guy has NEVER done a zoom session. The recording for the podcast is tomorrow, and I probably should practice a bit on zoom, as I actively attempt to disprove the old dog, new trick theory. Back with a blog on Friday, when we enter the great growing month of July. 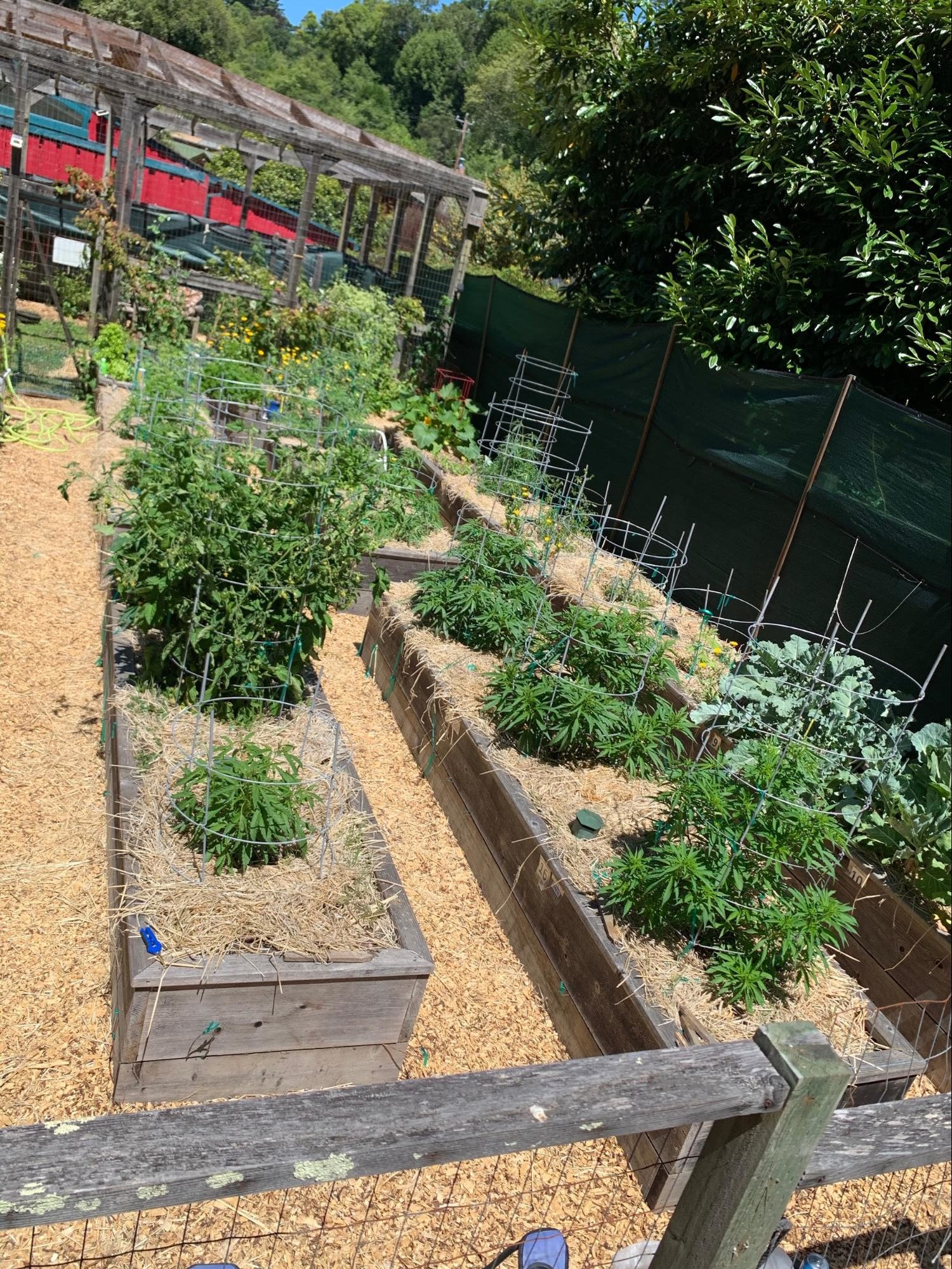