2020 Isolation Grow: The Poetry of Motion

This is RK 18, with a cabbage moth flying by for inspection.

This plant is still in veg growing mode, though it won’t be for much longer. She is at the other end of the beds from where we take the photo at the conclusion of each blog, so she’s not as obvious to the readers. It’s time for this particular cultivar, Rainbow Kush in bed 18, to be featured, because she’s one of the prettiest examples of veg growth we’ve had, and we’re almost at the end of veg growth. Note how with basic training on the outside boughs, and just two toppings, this is how logically she grows. We’ll still have to prune off a lot of extra, inner growth, but there is air and space between the branches. It is easier to spray this plant than a more compact plant like Bubba God, or CBD God, and it is more difficult (not impossible) for pathogens to form. Seed shops that tell you a particular cultivar is resistant to pathogens might not tell you that this resistance is entirely dependent on the growing conditions. If pathogens exist in your soil, no cultivar is immune. Sustained humidity is an invitation that pathogens cannot refuse. On the other hand, no outdoor plant is ever completely free of the threat of moths and their eggs.

An update on ACDC 22: She has begun flowering. This complicates things for the time being. After pouring tea this morning, I cut off more leaves turning yellow and brown. They were entirely fan leaves. I redressed the wound at her base. I want to see how she reacts to the tea. Because she has begun to flower, I do not want to pull her until I’m certain she cannot be saved. 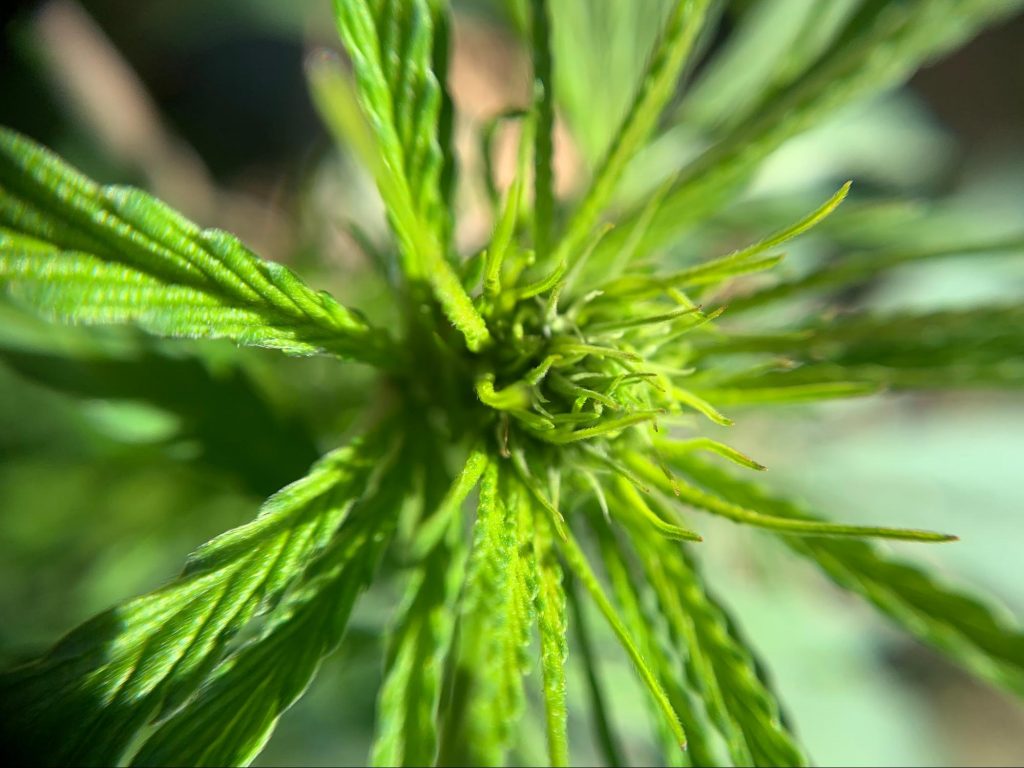 I’m also interested in documenting what happens to this plant, specifically for the blog. It is an educational opportunity. At some point, we will either have to pull this plant and document the reasons why she failed, or nurse her all the way to harvest in about nine weeks.

I also did an entire crop foliar spray of Neem. I see no evidence of mite infestation in any other bed, but spraying Neem as a preventative is a good way to eliminate any surplus mites.

The next thing I’ll do for bed 22 is a flush tomorrow morning. I’ll run water at high pressure through that entire bed, just in case there is some residual nitrogen burn. I’m pretty convinced this is not the case, but I’m running down the checklist of stuff to do for a plant in trouble. While I’m mostly convinced this is a spider mite infestation from that crack in the base, I have to proactively deal with other possibilities, just in case. When I want to know the health of a plant, I look at the tops. If the tops are still healthy, proceed. Right now, her tops are flowering.

Four caterpillars were found (to the surprise of no one) deep inside CBD God. That plant is so dense, they had escaped detection until today.

The following Common Buckeye Butterfly Caterpillar is enjoying spending the summer feeding on and sleeping within our borage. 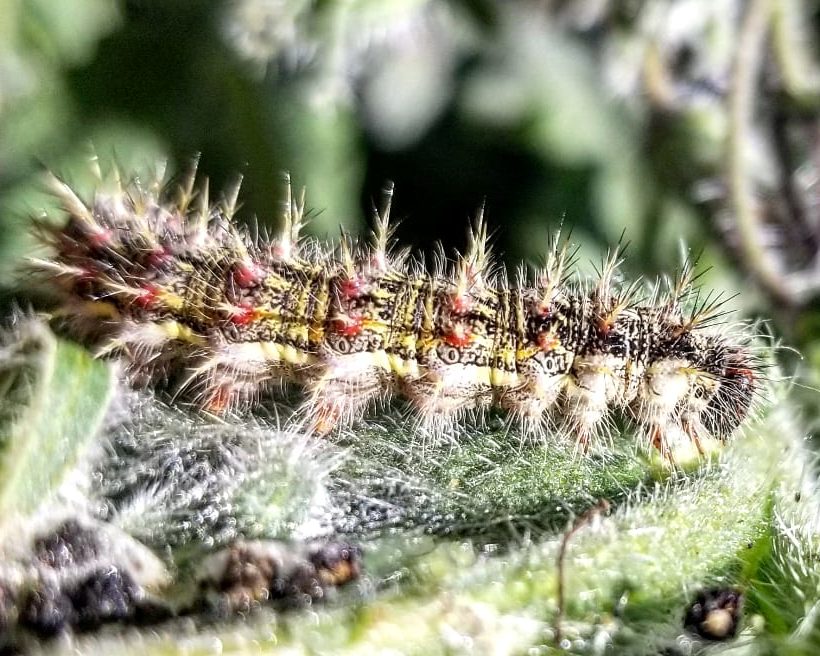 Moths are everywhere. Eggs are being laid on leaves all day long. As plants transition into sticky flowers, these eggs become more problematic. 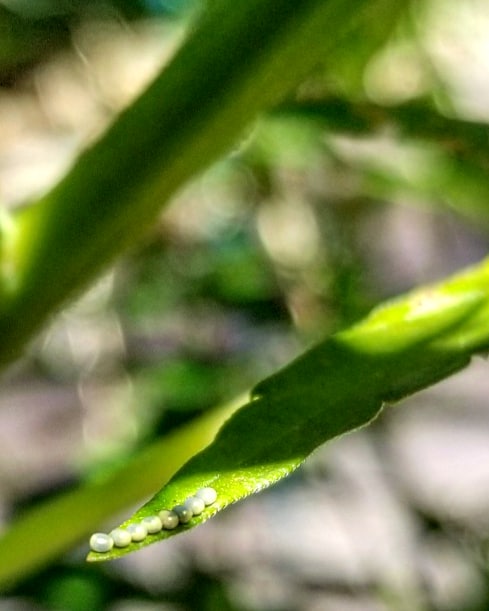 All over the garden, despite the lush foliage, leaves are being folded in half to protect hatched worms. They sit inside the leaves and eat the greenery while they grow. Where they eat, they leave scat. That scat isn’t so much an issue on leaves, but as plants begin to flower, scat becomes a mold problem. 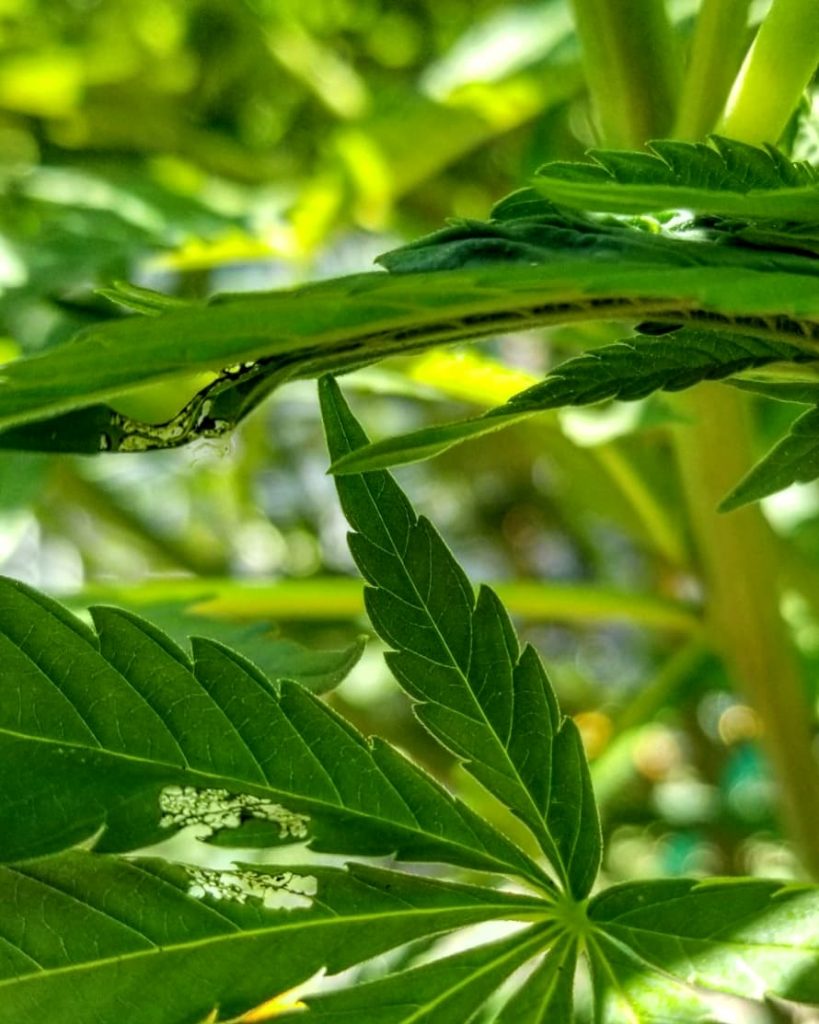 A full crop BT spray ensued. It was time for it anyway. The plants need this at least once a month. There was one other reason we proceeded immediately with a BT spray: The almost complete lack of powdery mildew so far this year. To date, we’ve cut somewhere between 12-20 leaves with a smidge of pm. That’s it. Clearly, the lower humidity has played a large part in this. Perhaps solarization also contributed. What Regalia sprays I’ve done have no doubt helped.

But the simple fact is that last year at this time, I was already on our second bottle of Regalia. I was spraying every other day, because I had to. This year, I haven’t sprayed any Regalia in over a week. I’ve used about ⅓ of a bottle so far this season. While it may be difficult to pinpoint the exact reasons for the improvement, it does point to another year of doing the same things to help prevent pathogens. I’ll do the same treatments, including solarization for six weeks. In my opinion, all of these factors have contributed, but if I had to name just one, it’s the lack of a sustained humidity spike so far this year. Without that spike, and the obvious increase in pathogens, there are less compelling reasons to prune. The temptation is to just let them grow, healthy as they are. Case in point is CBD God, which is closely clustered together, despite training, with no pathogen issues to date. It defies logic that she has no issues, but we saw the same thing last year, too. That said, before the BT spray today, four worm nests were found deep inside CBD God, in locations that could have possibly escaped a casual spraying. I made certain to go deep inside and between stalks. And while BT is not translaminar, it does not matter, since eggs need to be laid on the top side of leaves to remain in place.

I always feel significantly better when I see the emergence of crab spiders in the larger plants. They seem to show up around August, and will remain faithful centurions through harvest. 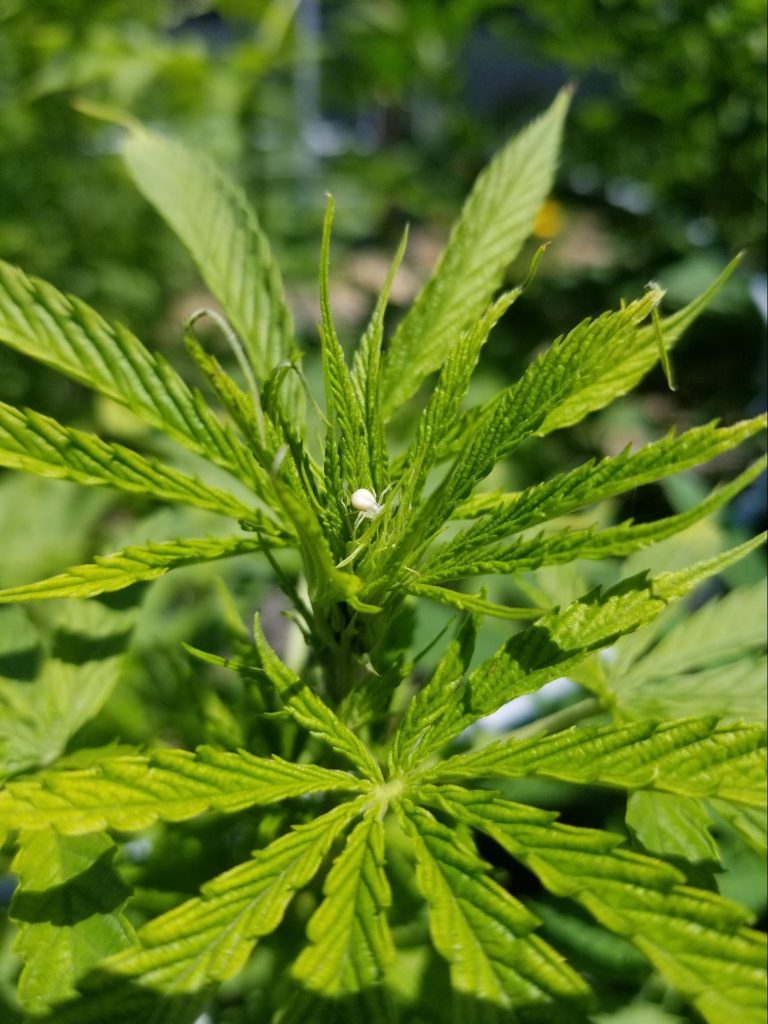 We are on the verge of beds filling with flowering plants. Most of the plants are rapidly approaching the end of their vegetative cycle. This is one of my preferred times in the garden. Before we switch over to all flowers, I want to take a few more moments celebrating the glory of vegetative growth.

One of my favored things to do is to simply sit in a chair amidst the beds, surrounded by plants, or sometimes be positioned to mainly observe only one bed. I like to become as still and silent as I can be. I like all the creatures at play in my beds to view me with ambivalence as they go about their tasks. I try to be the proverbial fly on the wall (or privacy screen).

In particular, afternoons and evenings are when breezes blow in from the sea, and I am allowed to indulge and observe one of my garden pastimes: The poetry of motion.

There is a randomness to the wind on our valley floor. It might be mostly coming from a certain direction, but it is by no means confined to that direction. It whips and swirls. The wind can be a bludgeon, or a surgically pinpointed strike that dries pathogenic moisture, while nearby plants remain almost entirely motionless, seemingly untouched by the passing breeze. Our plants have been contending with wind since the day I first placed them in pots. I had fans on in the cottage the entire time they grew. It was all to prepare them for this, the real thing.

I am constantly interacting with the plants. As they grow and assert themselves, I enjoy taking the time to savor their splendor. Watching wind hit plants reminds me of the beauty and chaos of creativity. Plants moving in the wind are like the best poetry: Random, disparate words put together to form something new and beautiful. For inspiration on this blog, sometimes all I need to do is stop, watch and listen. 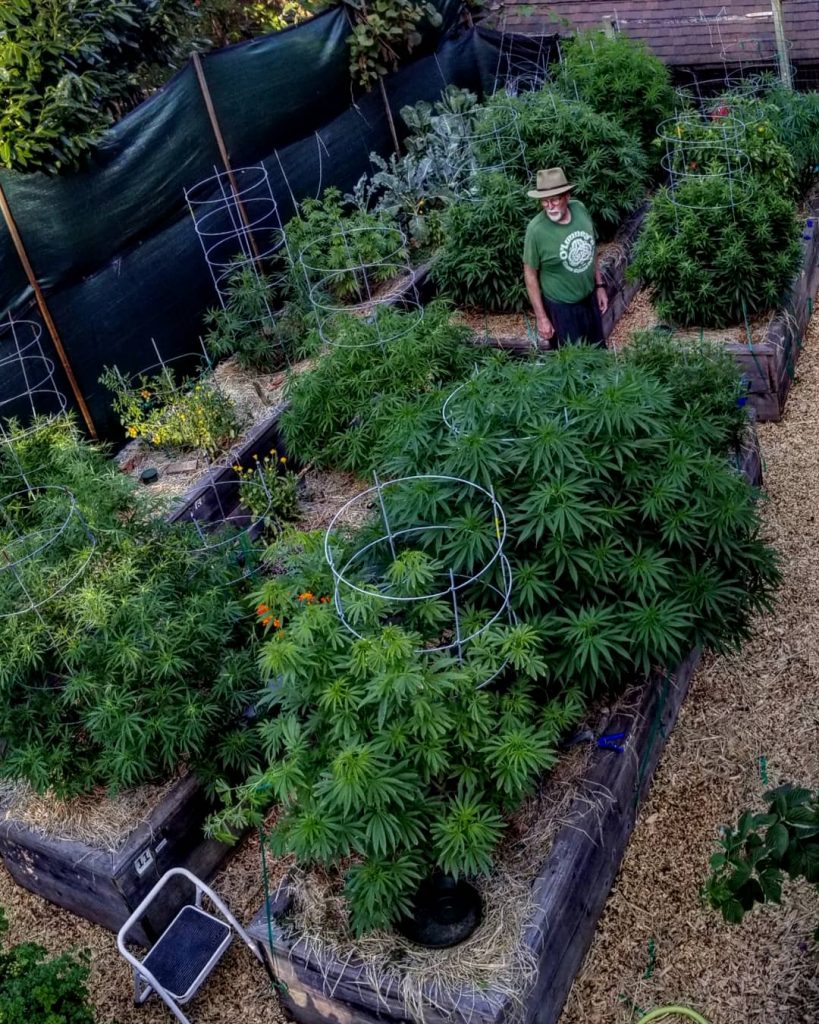 As a gardener, I am the caretaker of miracles. I am able to help facilitate the growth of both food and medicine for our family and community. We are all the grateful beneficiaries of this bounty.

For a few moments, I’d like you to watch what I get to see all the time, though not in slow motion. This is Rainbow Kush 18, the largest (by both height and circumference) plant that we’re growing this year. Before she starts to flower, I want to savor a few more moments within the perfection of her veg growth. She is attracting all manner of both beneficial and harmful insects. She is an alluring target, and a prime example of how vibrant a cannabis plant can be just prior to flowering. The tops of her long stalks are still pliable with light green flesh. She is next door to Shiatsu Kush, which was on day 22 of flowering when this video was shot.

Even in moments as common as the wind, I am reminded that while I sit in silent mindfulness, taking in the splendor of the garden in real time, there are constantly unique moments happening around me. An insect flies by that I barely notice, but will never see again. A fledgling jay figures how to hunt a bug, while a Black Phoebe swoops and beats the jay to it. A gopher emerges from beneath the surface of the earth for the first time and squints toward the sun. Or sometimes, I just close my eyes and listen to the wind rustling all the leaves I’ve grown this year. Like every other crop and plant, it won’t be long before all the leaves and moments are memories. I endeavor to cherish as many of these as possible.

I hope these videos bring you a hint of the contentment I feel in the garden. If you can’t breathe what I breathe, at least you can see what I see.

Back on Friday with updates on how trained plants are spreading over the beds. I’m also beginning work on blogs pertaining to the specifics of how we turn our plants into medicine, both tinctures and pills.