With one plant having begun the flowering process, it is now glove wearing season in the beds. I did my initial pruning of Shiatsu Kush. Many more to come. She has already become sticky. From here on, I want as few fingers as possible to touch these plants, and only with gloves. We take trichome production very seriously around here. Once they start to appear, we only touch a plant when we have to. This is Shiatsu Kush, six days into flowering. 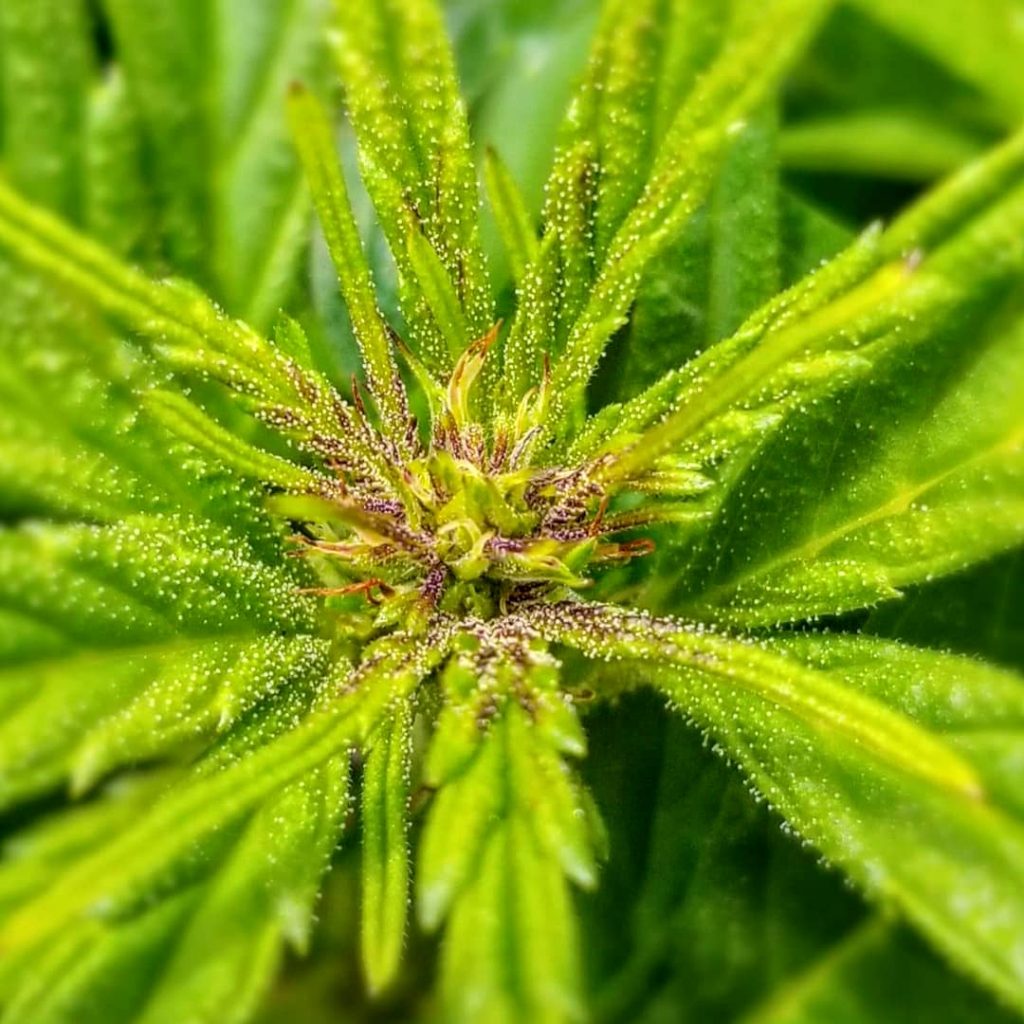 It has been one glorious month of growing since the solstice, and we’re mostly good on light for the rest of this month, but the window is closing fast on keeping our plants in the sun for over twelve hours a day. Soon, and I mean in a few days, the sun will return to the other side of the south hill treeline, and the amount of sustained sunlight hitting our plants will be immediately cut by about one hour. That will decrease by the day through harvest.

What does this mean for plants still in full veg growth mode?

The first year I noticed this, I kept expecting all the plants to start flowering immediately, or certainly, within a few days. It doesn’t seem to work that way. For whatever reason, I’ve watched most of my plants continue with veg growth for the remainder of their normal cycle, even after they no longer are getting 12 hours of light. The plants that are predicted to harvest by mid-October, generally fulfill that prediction. And while it’s true that sunlight peeking through trees and hitting the cannabis can fool the plants for a little while longer, the transition to flowering will begin over the next four weeks for all but four of the plants. The four in question are the four ACDC, which could flower with the rest, or could extend harvest into November. I would prefer being finished before Halloween, but will not be surprised if I’m not.

Fortunately, where I lose light at the end of the day, the beds start getting the sun earlier, and both the middle beds and the beds against the fence, will receive more afternoon sun. Because I got these plants in the ground when I did, they will get enough sun to properly finish the flowering process. When I start plants later, they do not get enough sun to finish as well.

Wonderful day in the beds with Brenden. We share an excitement over RK 18, which is growing at a comical rate right now, showing no signs of slowing down at all.

However, a note of caution and concern should be voiced, because in that same bed, we discovered one of our greatest threats was roaming rogue around the bed of this potential giant. This is the killer of large plants, the spider mite: 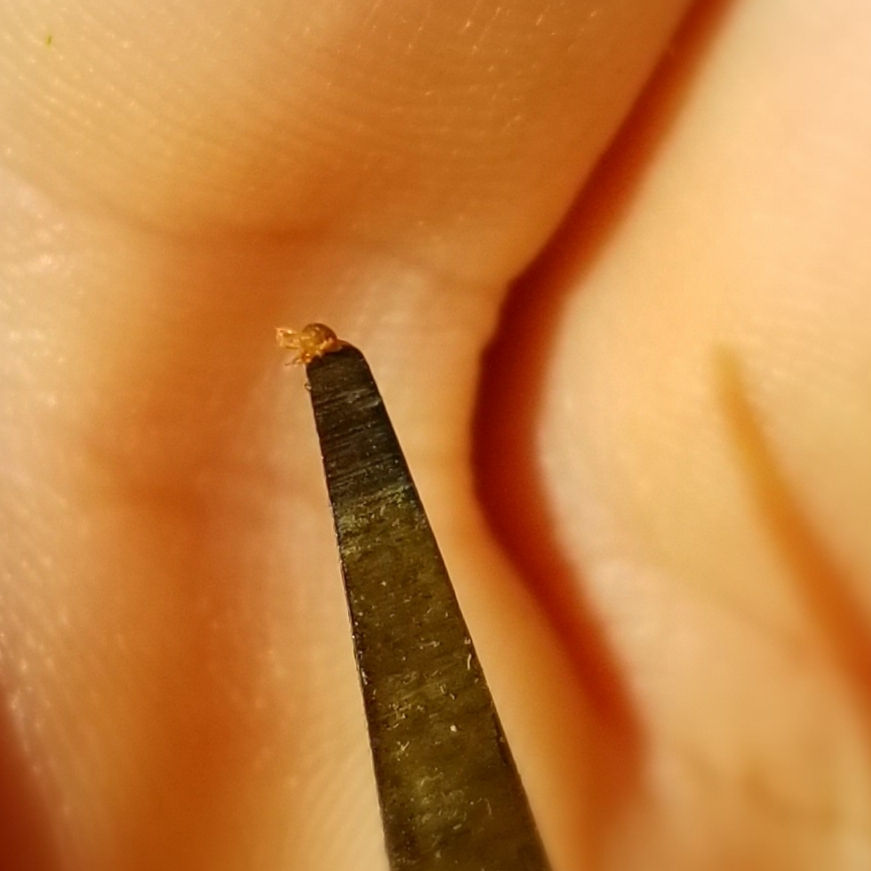 I truly don’t like this arachnid (it’s not considered an insect). This tiny, lightning fast pest is a nightmare for any plant. We first noticed the impact of this spider on our raspberry stalks. Amidst all the lovely green, flowers, and fruit, we would see one stalk turn brown and die. Any fruit on it would wither. It was surrounded by healthy plants. The spider mite can do this. They look for openings, they enter the plant, and they burrow. While they dig, they leave scat and that scat molds. Once it is inside the plant, there is nothing you can do but remove the impacted parts, or possibly the entire plant.  I shared with you the story of the plant we had to pull on harvest day because of systemic mold, caused by a spider mite. You can use Neem and that can control them fairly easily, but these little critters patrol the bottom of leaves until they can find a suitable host. We’ve only had one infect a cannabis plant, but the memory of it still stings. If we can catch them in the soil when we seal each bed for solarization, we could kill them. But we can’t seal everywhere, and everywhere is where spider mites live. They are an occupational risk, and one of the main reasons we grow plants that attract beneficial insects. The best way to deal with spider mites is with other insects that eat spider mites. Speaking of which, here we have the American Hoverfly, at this moment ignoring bountiful food sources for a little of the old in flagrante delicioso. Ahem. Get a room.

Even as we’ve only begun harvesting our tomato crop, I am actively and aggressively pruning our giant stupice. I hate doing so, but I must. This plant has received no fertilizer. She got some compost tea that was mostly molasses, but nothing else. She has grown, flowered and magnificently fruited with only last November’s salmon burial to power her. I’ve grown many stupice plants, but never one as prolific or large as this. I’ve cut off all the tops, and taken off approximately a foot of height, because I need this plant to fruit and die so I can utilize the space for training. There is so much fruit, and all of it is growing exactly to normal stupice size. Last year, I added Bloom formula to a tea for this plant, and while it virtually doubled the number of flowers and fruit, they grew the size of large cherry tomatoes. This year, I added nothing, and the tomatoes are exactly the shape they are meant to be. Summer Garden Pasta soon.

Something else of note: I have not watered the stupice in over a month. It is showing no signs of water stress. It has only wanted to continue to grow and flower. There are only two things that can stop this plant:  My scissors and bad weather. I’ve already cut off dozens of branches with potential flowers, simply because I can’t wait for that fruit to grow. There is so much fruit ripening right now, and for the next several weeks, so I’m not interested in preserving this plant as long into the season as possible. We’ll eat what is there right now and what will be ripening over the next month. In this series of photos, you can see how she’s been pruned, and get a small idea for how much fruit she’s producing. Please note how we have prevented any plant interaction on either side. Cannabis growth takes priority. Seeing how this tomato fares without water for the last month makes me think she has tied into our groundwater. Makes me wonder if the cannabis has done the same thing. 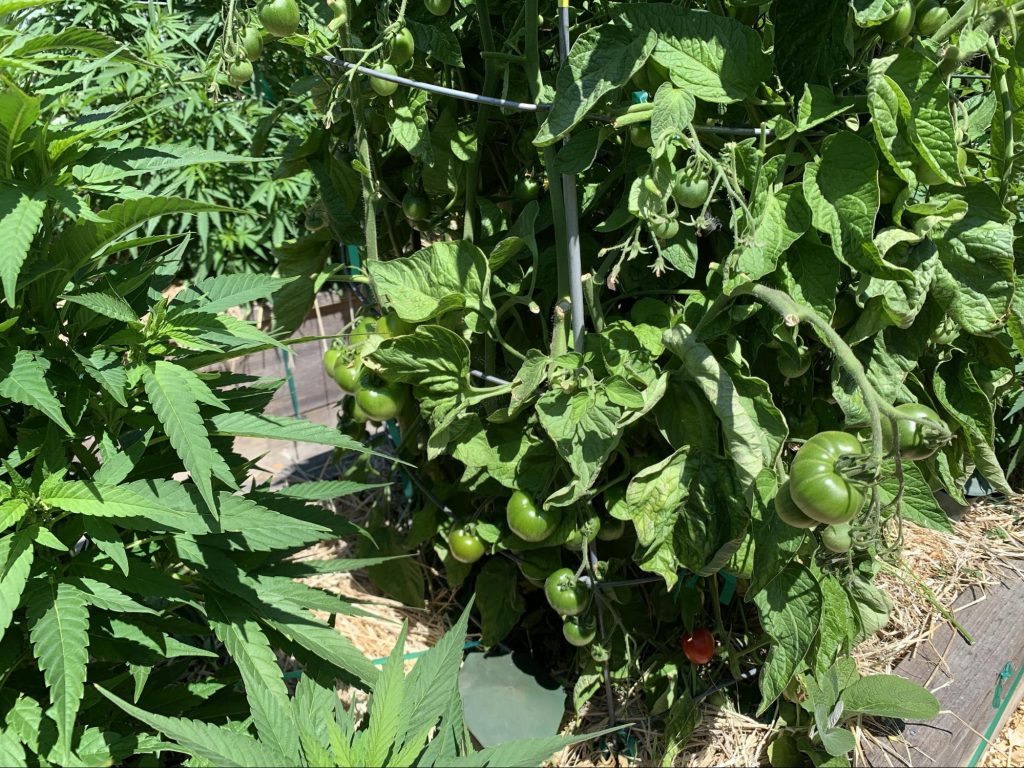 To the left is CBD God and the right is ACDC 22. You can see how I’ve kept this plant trim, with fruit confined to the cage perimeter. The biggest concern right now is the ACDC, which is advancing toward the tomato rapidly.

You can see tomatoes are beginning to turn. When we’ve had our fill in a month or so, we’ll remove the plant, but leave the cage. I’m pretty sure ACDC will be very happy to be training into that bed, and toward the setting sun.

As I look around the beds right now, plant interaction is becoming a thing, though not as much as last year. We’re seeing such rapid growth, that some interaction is inevitable. But it is daunting to spend an hour training a plant to prevent plant interaction, as Brenden did with Shiatsu Kush a few days ago, only to have RK 18 advance her entire frame over a foot in the last seven days. She literally grew up and out, over 12 inches in a week. The only other plant growing at this rate right now is ACDC 22. But because RK 18 is a much larger plant, growth like this covers much more ground. She is an advancing wall of cannabis. That’s RK 18 on the left and Shiatsu Kush on the right.

So we are beginning the transition to flowering. One plant has begun, and more will follow over the next month. As growers, it’s now about the almost constant pruning we’ll do to maintain as much plant and flower autonomy as possible. It’s a devil’s bargain we strike when we grow. We encourage and in fact, train our plants to fill the perimeters of each bed before allowing the plant to grow unabashedly toward the sky. We want to take the fullest advantage of the precious space in each bed. If we have to trim a bit to facilitate this, so be it. Because we’ve spread out the plants more this year than last, there is decidedly less plant interaction.

Right now, we have plant interaction issues between Sour Tsunami and RK 16, and this will be a challenge as both these plants are advancing into the category of very large. We have RK 18 and Shiatsu Kush as shown. Shiatsu will be harvested in mid-September, which should give us a month to utilize that space for RK 18. We have ACDC 22 with the tomato plant. Last year, given how crowded things became, I’m guessing we pruned a good pound or more of flowering cannabis. I hate doing that, but I hate spreading pathogens from plant to plant even more.

As I look at the final photo from this blog, I can’t help but notice that the plants are beginning to blend together. The next month is when the privacy screen becomes the only thing preventing our plants from being much more visible to the rest of our little valley. Most of my neighbors know what I do and why. But there is no reason for being ostentatious about what I grow.

Stay safe everyone. See you next week. Survive and vote.