Soon, I will begin my pre-dawn ritual of rising between 5-6 in the morning. I’ll stretch, do some pilates, pushups and crunches for about 30 minutes, before bundling up and heading outside. I have to be extra careful at this time. I had my second hernia surgery a few weeks ago, luckily just before Covid-19 hit the Bay Area, and should not exert too much for a couple more weeks. My usual exercise has been interrupted for months, and it will take some time for me to build up what I’ve lost. I don’t drink coffee or tea. Morning exercise is how I wake up.

I’m used to being out there early. I will eventually be doing foliar sprays around dawn every other day to prevent pathogens like powdery mildew from getting a toe hold on my plants. I program the water to drip around dawn, and do all special corrective baths (like calcium and magnesium) while the sun is still low on the horizon. In a couple of weeks, I will go outside with a notebook and study the exact pattern of when and where the sun begins hitting our beds. It’s not all at once. The sun has to slide past a redwood grove, and over a Japanese maple, before the first rays strike dirt. It is over an hour after the sun is up that it finally rises high enough to hit most of our beds.

I watch to see which beds are lit first, and which beds remain in light while the sun rises. I’ll be watching that and charting it all the way through planting. Within my relatively narrow window of time to grow, I will choose which plant goes in which bed, because that is the bed I think has the best opportunity to grow that particular cultivar this year. I keep records of all my grows. I know, for example, which beds have historically grown the best CBD plants, as opposed to beds that have produced killer Kush. Because of the angle of the sun, and the heights of trees, certain parts of the beds, especially the northernmost row, get more late season sun than the beds only 15 feet south of them. So I try to make certain those late sunbeds get CBD plants. CBD plants are a priority for me.

I have to do the same scouting work every year. Can any of you figure out why? Because the trees that surround me on all sides grow and change between growing seasons. The way it was last year will be different this year. It’s been different every year. If I did not do this scouting, and make careful decisions about which bed for which plant, I would not take the fullest advantage of my growing time or mediums. Put it another way, at the end of each grow, I want to feel I did everything I could, for everything I grow.

I offer this explanation also as evidence of how mindful the growing of this plant will make you, if you pay attention.

I’m not growing cannabis. I’m growing medicine. The growers I know best, all outdoor growers, understand exactly what I mean by this. We face huge obstacles growing outdoors that require our full attention in order to harvest as clean a plant as possible.

That being the case, you may be asking yourselves, if medicine is the ultimate goal, why not only grow indoors? You can control the entire environment indoors, something you cannot do outside.  I fully acknowledge that the future of medicine with this plant will take place in controlled, laboratory settings. But people will always want to grow outside.

In our case, we built this garden long before we had any need for growing cannabis. To turn what we have into an indoor grow would be A: Too costly, B: Call too much attention to the grow from outside our home, and C: Not be nearly as pleasing an environment to work in.

I really love growing outside. I love the sun. If you treat this plant like medicine, even outside, you will yield a medical product. In growing these plants for my wife, my family, and our friends in need, I have a simple philosophy: Every leaf matters.

As for growing and harvesting cleanly outdoors, what I specifically mean is harvesting without mold, mildew, or dead insects on the dried plant. In addition to growing and treating each plant with a personal level of care and responsibility, fixing potential problems as they happen, we also believe in washing our plants at harvest. This is after the first fan leaf trim, before hanging in the cottage to dry. It is a multi bucket mixture of water and peroxide that catches any bits of impurity we missed. (It does not wash off trichomes) After our flowers are washed and then dried in a temperature and humidity controlled cottage, it is medical grade. We get it tested. If you grow cannabis for your own medicine, you must get it tested. That’s the only way you can be certain of what you are ingesting. Testing is not cheap. It runs us about $2,000 a year for the things we really need to know about what we grow. Lab work is a necessary expense for us, that is vital to my understanding of this plant, even if it financially stings. If it ever becomes legal at the Federal level and loses the ridiculous Schedule 1 status, I would love to eventually be able to write this off.

When we began growing cannabis, our largest weakness was revealed: The amount of sustained sunlight that hits our beds is able, by a narrow margin, to effectively grow and harvest. It is a problem that can only be solved through strict time and bed management. The culprits for this problem are all the trees surrounding our property; especially the treeline that runs along the top of the hill bordering the southern side of our land.

Cannabis needs over 12 hours of sun to vegetatively grow. When it dips below 12 hours, plants begin to flower. It has taken me four years of growing to hopefully determine the exact right time to bring plants to the beds. I’ve been planting them later each year, because one or more plants have attempted to flower almost as soon as they were put outside. I’ll tell you how to deal with early flowering plants when I write about compost teas.

Last year, I charted exactly when the sun began to hit the beds in the morning, and when the last rays struck them in the evening. The plants I put in beds on May 27 or later did not try to flower early. Three of the four plants I put in the beds one week earlier had tried. My longest day of sun hitting the plants is 13 hours, 22 minutes. That’s summer solstice, June 21.

The spring that resides on our property is not the only spring in this area. These hills are covered with springs. This excess of water is one of the reasons the entire region grows with such uniform vigor. It is the large, older trees that provide a challenge to grow, because as the growing season moves from vegetative to flowering, the sun is in full retreat toward our southern hill line. When plants flower late, the sun begins disappearing behind trees and then reappearing, sinking lower and lower until the amount of direct sunlight hitting the plants in those final, vital flowering days, is compromised.

In previous years, I have put cannabis in the ground beginning in late April, early May, mid-May, and now this year, late May. I have also filled the beds with plants as late as June 23, and they have grown and flowered.

However, the later I get plants outside, the sooner shadows start falling across the beds; especially during those critical last few weeks of flowering. Ideally, the plants I grow should be harvested between the end of September and the middle of October. I’ve had plants not ready to harvest until the second week of November. The test results on those plants were not as impressive as the same cultivars growing in different beds harvested weeks earlier.

There are many potential reasons for this difference. The growing mediums, for example. One bed will grow better than another bed during a given year. Quality of soil, and water, pathogens, and amount of light are all possible reasons. But one thing I’ve seen are plants that flower late, and get less late season sun to finish the flowering process, are oftentimes less medically potent than a plant that grows and flowers in closer to a full sun growing season. Test scores from four years of growing back this assertion. I have 22 beds, and I grow 12 cannabis plants. One of my key jobs is to pick the right bed for the right plant, during the given year. To do that properly should not come by chance. It requires planning.

I cannot do anything about the trees lining the top of the hill. Those trees are not on my land. I have had to watch in real time, take notes, and learn exactly when each of our beds is most receptive to a plant that needs over 12 hours of sunlight to effectively grow. Last year, I had to micro study, because I had several plants that went in late. As the sun hits its peak and then retreats through the remainder of the season, it hits the beds at different angles. A bed in the sun today might be in full shade at that same time in only a few days.

This is a delicate dance. I can grow successfully, but my window of opportunity is narrow, and my discipline as a grower must be acute. I start when I need to start, and I do all the necessary steps exactly when they need doing. There are no off days. As long as I have plants in the beds by the end of May, or the first week of June, and no later, I will grow the most potent plants that I’m capable of. Without exception, growing cannabis is the most labor intensive and complex plant I’ve ever grown. I’m looking forward to my first sunrise for this blog. 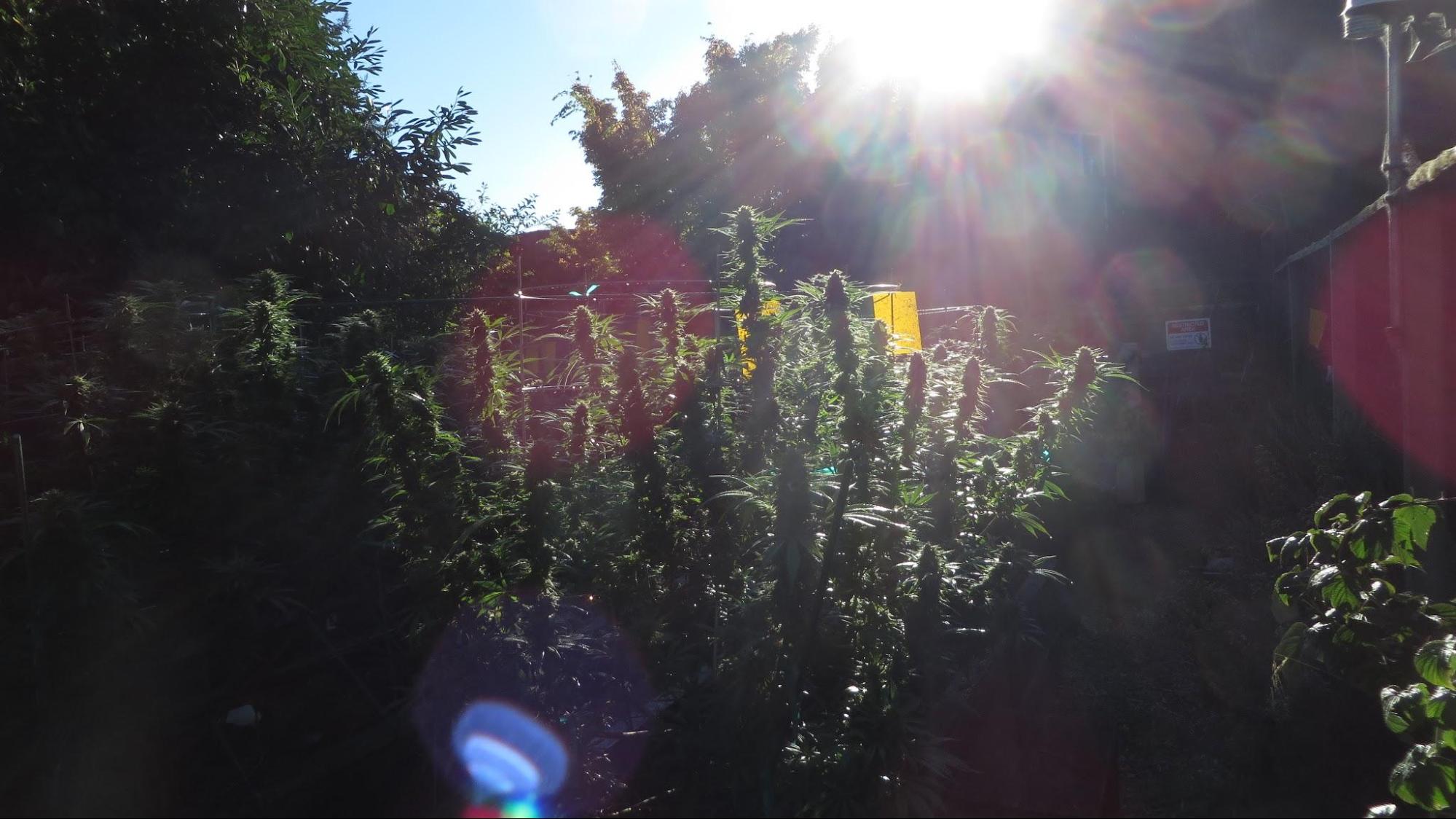