All gardening plans are subject to change. In the last blog, I wrote that I was about to do the first Regalia foliar spray, and that we’d do a BT spray before the end of June.

After plant inspection with Brenden, before he began training plants, we determined that we needed a BT spray immediately. There were several active worms on one of the Ringo’s Gift plants, no doubt attracted by that cultivar’s attempt to flower early. She’s getting just a bit too much shade in that first row. So I stripped all the potential started flowers and will blast that plant with a fish emulsion tea tomorrow. Six of the 13 plants have attempted to flower. Three have already been turned back to veg growth, and I suspect the other three will return after the tea tomorrow. My only doubt is the continued early morning shade on the three plants in the row against the fence. They are all ruderalis-like, so I’m fighting an auto flower response, in addition to a shade issue. But once these plants are switched back to veg growth, they should remain for the proper duration of their grow. We’ll find out soon. One thing has become clear: One tree on my property needs pruning, to solve the early morning light issue for most of my beds, and we will do so after her leaves fall. She grew just enough over the last year to impact the start of the grow. Once these last plants switch, I will allow them to grow without further interference. It’s prime veg growth time out there now.

There are no signs of powdery mildew anywhere in the garden, including vegetables (zucchini)  which is unusual, and I’m hoping is an indication of our success in solarization last fall. I expect powdery mildew to return when the humidity remains high, but without a single sign so far, there’s no reason to begin Regalia for another week at least. Subject to change, of course.

Three plants had their first training. There are two key goals in early training: Widening the base of the plant to open up the center to light, and giving support to lower branches. The plant Brenden is working on is CBD God. If you look back at the Settling In While Grieving blog, and scroll down to the pic of this plant, you’ll see how much she has grown in two weeks. The rate of growth is beginning to rapidly accelerate. 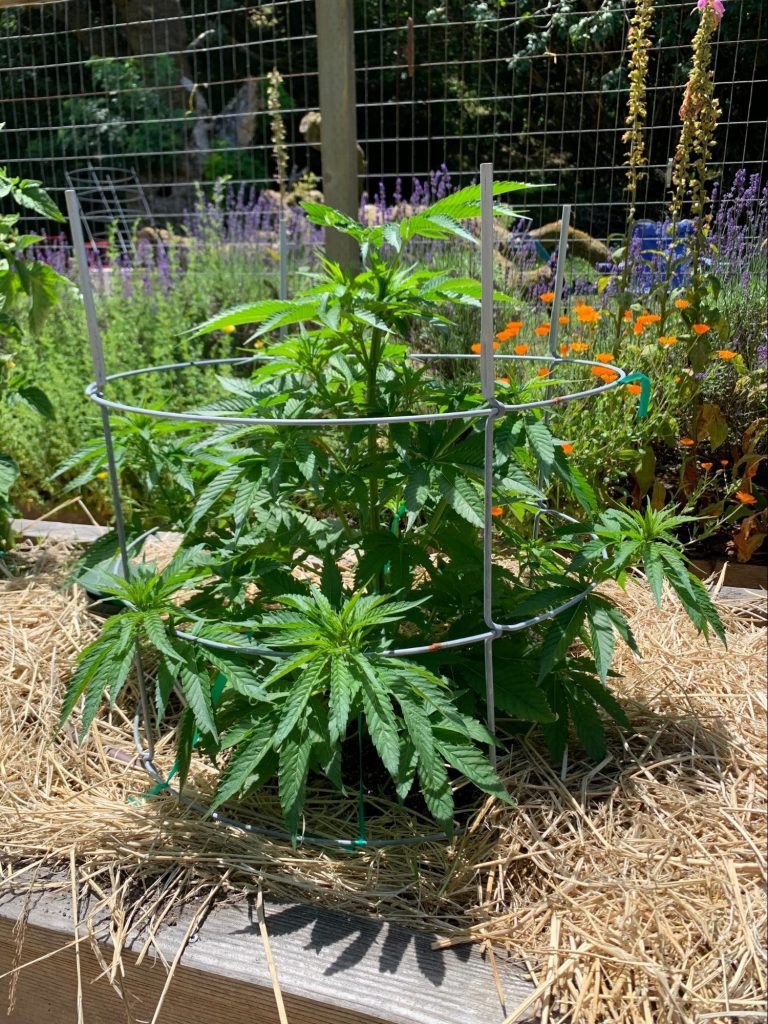 She was only recently topped (in more than one spot, because a few tops were looking like they wanted to flower) and this is the beginning of her training. It’s difficult to see without lots of photos, so Brenden did the following painting to make his work clearer. Note how the lower branches have been almost, but not quite flattened. This opens up the inner portions to more light, and also gives the lower branches a longer path to climb, by looping them under the cage rungs. Also note how he ties certain branches with an extra connection directly to the ever expanding stalk of the plant. He knows certain branches, because they are being trained, are going to need extra support for the added weight. We have lost branches because we did not anticipate the impact of added weight. 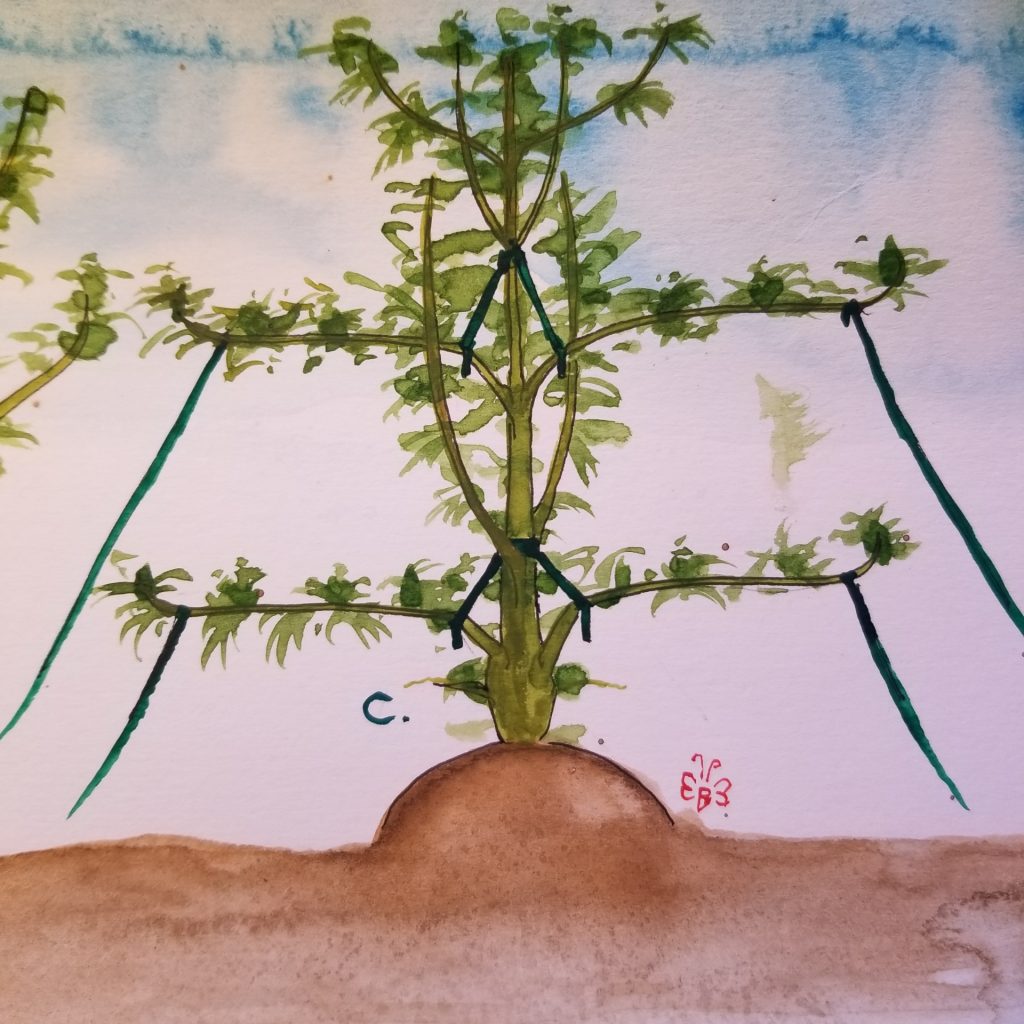 There are many ways to train cannabis plants. This is the practical way Brenden saw initial training with our particular raised bed frames in mind. There are no fan leaves or tomato cage in the painting to obscure the sketch. Note that in the photo, there is much more inner growth that needs to grow out more, in order to be trained. Topping helps facilitate that outward growth.

Btw, below all the lucious new growth, and potential for what is to come, another creature in our beds has an entirely different agenda. This is a hole on the side of one of our beds. Inside that hole, is termite larvae. If there is one like this, there are more than one like this. 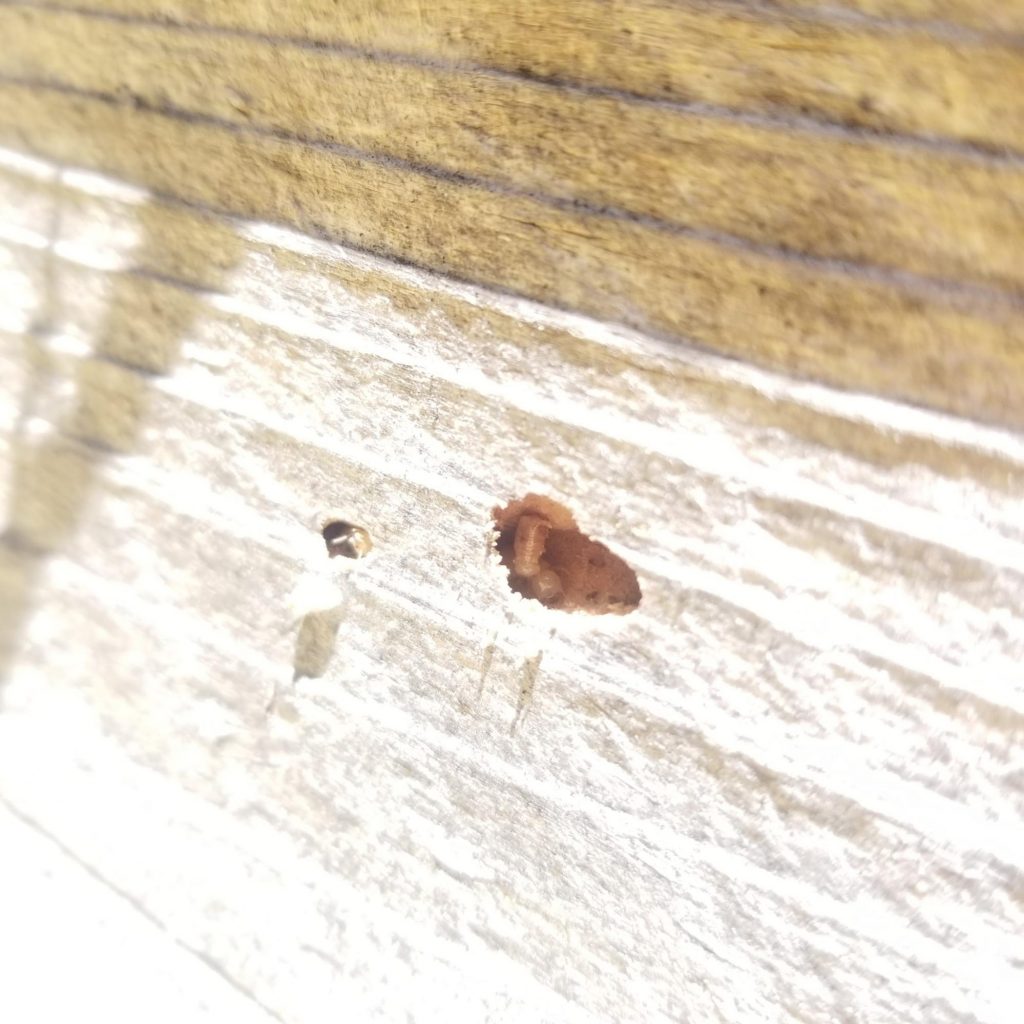 Of course, it’s only a matter of time before various circumstances force us to rebuild our beds. Rain, rot, termites and gophers eventually compromise outdoor growing mediums. Btw, whenever we have to rebuild again, and we will, every bit of soil will be saved and placed into the new beds. I will never again get soil brought in that takes years to properly condition. I’ve worked too hard on this soil.

Other plants are having similar growth explosions that allow for critical early training. In particular is the Ringo’s Gift that didn’t try to flower early. She is growing like crazy. It is especially fun to have such a fine example of a ruderalis like plant, with large spaces in between branches. Her leaves come from her Harle-Tsu heritage, and specifically, Harlequin. But her spacing is all AC/DC. And yes, in case you were wondering, that little green container is the slug catcher. Look under that lid at your own peril. 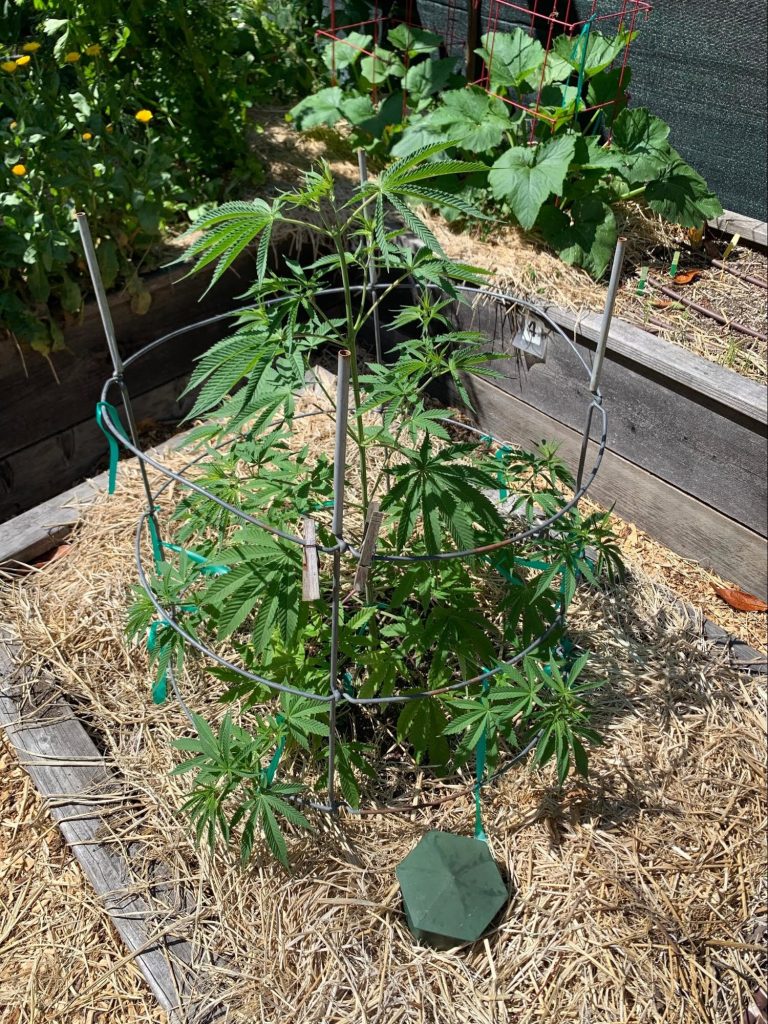 It’s difficult to see, because plant tape blends in, but the same basic training ties were made on this plant as on the other. This plant was also just topped, but only once so far. She has not tried to flower, and I’m certain she is committed to a full growing cycle.  I’ll be putting the next part of the tomato cage on this plant soon.

Another Saturday of water and tea. Btw, you may have noticed I’m watering on Saturday, not Sunday. The simple reason is I’m trying to take Sundays off. Between growing and blogging, coping and living, I need a day to be quiet and recharging. Of course, I’m still in the beds on Sunday. I can’t help myself. But–at most, I will make a note and address whatever I see Monday morning. Unless it’s something serious, of course. Or if I’m blogging. Lol.

I wish you could have been with me while I poured this morning, just to take in the sounds and smells. There is something about being out there early, giving them water and food close to dawn, watching the tops of each plant as they turn and search for the rising sun, while drinking their morning brew. Speaking of smells, I give you the Lincoln Rose: 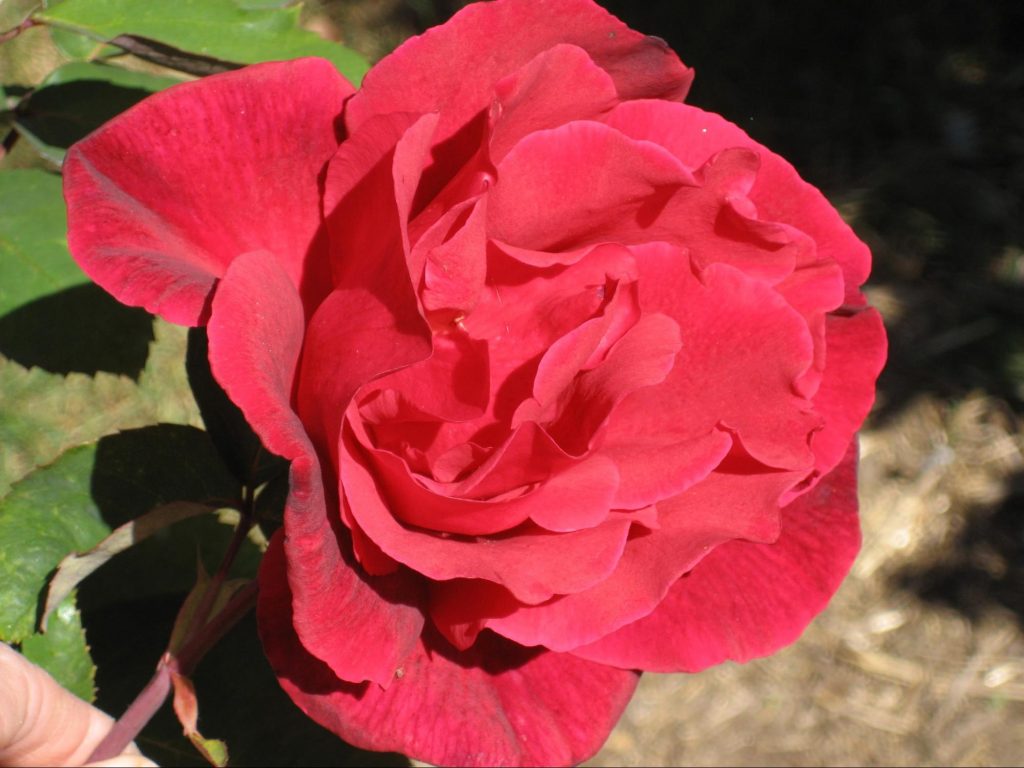 And while I’m choosing to highlight the color red, I might as well give a shout out to another beauty that has come into harvest this week, our raspberries: 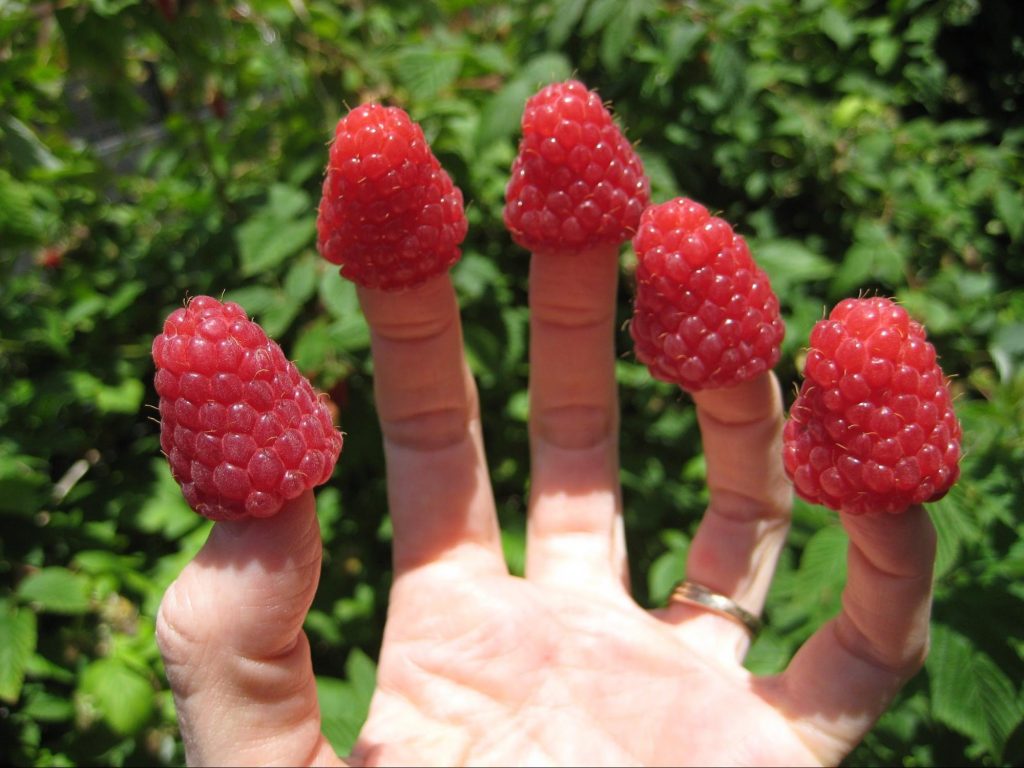 If you ever pick ripe raspberries, promise me you’ll do one thing: Cram five into your mouth and chew. We are collecting berries and freezing them, to make jam when we have enough. A fair amount of these are consumed while picking. As described.

You have probably noticed there’s a lot more growing than cannabis. We’ve been growing food here for over 20 years. Some of what we have grown is now part of our permaculture, like the raspberries. They began in one spot, only about five or six rooted cuttings planted directly into the ground. They have migrated all over the aviary. Raspberry sprouts come up all the time in about six of the beds. When they do this during the grow, I pull them and cut them into the compost tea. If we allowed them to do so, raspberries would migrate all over the aviary and would eventually take up all the beds. We could farm raspberries. They really love it here.

I’ve mentioned plums up the hill, and there’s a Gravenstein apple tree close to the plum trees. Later in the summer, there will be huckleberries growing wild. We are wild food collectors all the time. We call it free food. Beneath our buckeye tree every winter grows Miner’s lettuce. (Btw, I love that site) This lettuce was a staple for the Miwok people that called this place home long before white people. We eat it for months. There are lots of thimbleberries growing wild, though I would only recommend them if you are seriously short on fiber in your diet. There was one year we picked enough huckleberries in one day, to have them in our Sunday pancakes for about two years. There used to be a field out here that featured an approximately 75 yard long wall of blackberries. When our children were very young, we would pick from that field and eventually have a massive berry fight. Somehow, though Karen has questionable throwing aim, she always managed to land one berry behind my glasses, so it would explode in an eye. As a response, she received my utmost respect, and an avalanche of berries. One early morning, Karen and I picked 64 pounds of blackberries in three hours, went home and were up all night making jam. By dawn the next morning, every berry had been preserved. I mentioned that there used to be that field. The field is still there, but one year of serious rain (67 inches) turned it into a small lake, and fundamentally changed it after drying. The berries did not return like they once grew. I drive past that old field and always look at it, wishing I could pick berries there again. But I don’t get sad, because it was nature, and not humans, that decided to change the berry field. I respect nature too much to question her wisdom.

It will not be long before we are picking our meals. In truth, we’re about 50% there already. We’ve got lots of lettuce, collard greens, kale, broccoli, and we’re about to cut our first baby zucchini to use with dinner. Peas are climbing the aviary fence being used as a trellis. We’ve been in isolation a long time, so picking our meal sounds very good to us. Almost like attending a new restaurant. Grow your own if you can, folks. Grow everything you can on your own.

Seven of the plants were started two months ago today. The next month will bring a rapid explosion of growth. Before they turn three months, significant pruning will begin, as we start to eye each plant for potential flowers. It’s day 100 of our isolation. Just want to acknowledge and thank everyone out there doing their part to help others get through this Covid nightmare.

One last note from today: For full disclosure, I should mention that I’m not the only grower in my area doing almost exactly what I’m doing. Others are also growing for their partners who have severe pain issues. I only became aware of one of them when they contacted me after reading about this blog. That grower started doing this decades ago, for the same reason, when his wife became ill. The other grower is someone I’ve known for years, and he is one of my inspirations. He and his family helped me get started. I would not hesitate to turn to either of these men for advice, or to share a growing tale. I’m certain others out there are doing what I’m doing. I encourage all growers to reach out and form networks with other local growers of like mind. Having other growers in a network is vital for support, and reinforcement. It’s nice to have some company with empathy on this journey.

As I suspected would be the case, all 13 plants are in vegetative growing mode. All six that tried to flower early were reversed (rather easily) by compost tea. Boom. The growing sprint is on. 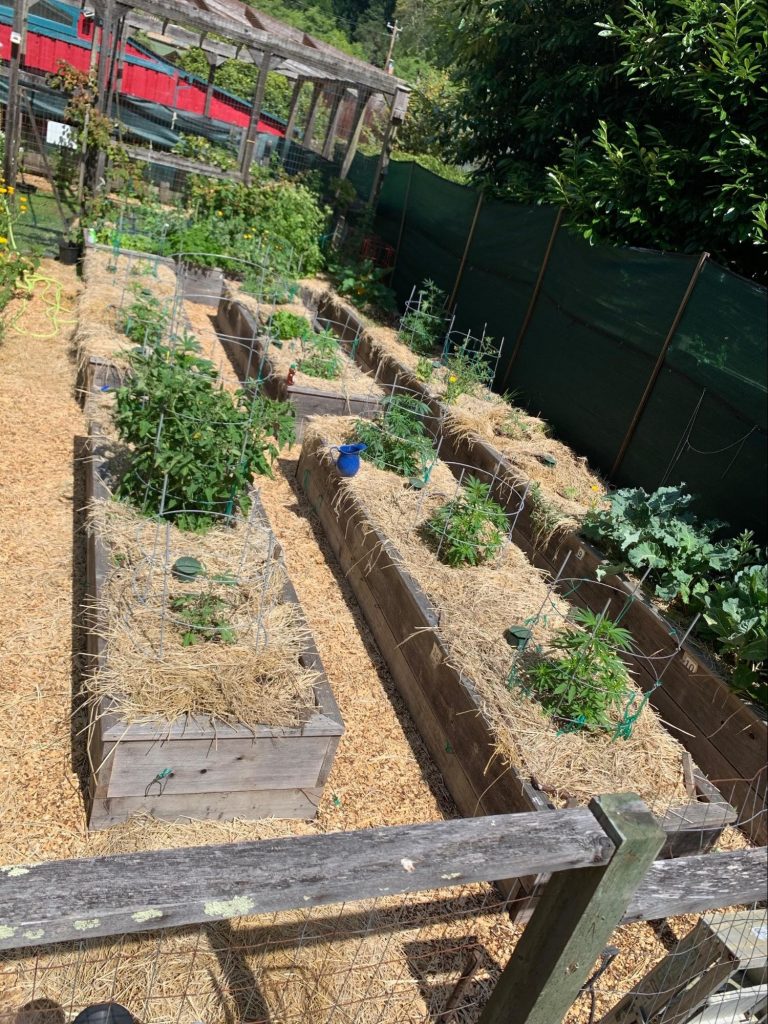