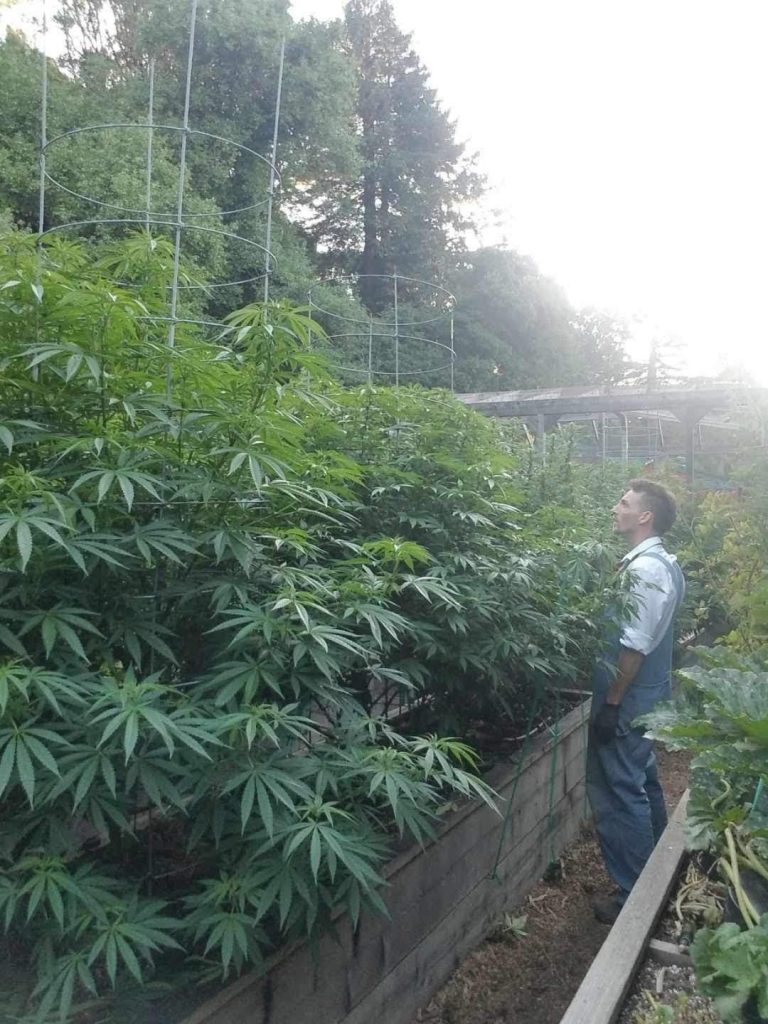 If you go back to the first blog in this series, you’ll see the weights of our four harvests listed. You can see the improvement in the beds based on weight alone. But the soil improvement was only one component to our sudden and dramatic rise in yield.

The other key component was training. Training is the bending of branches, in order to open up the largest possible portion of the plant to direct light. That means less flowers in shadow, and a lot more yield.

Based on the grow we had last year, I know I need to create more space for the plants to spread out, so that training is more productive and efficient, while attempting to minimize how much the plants touch each other. This is a challenge. If you look at the “sea of green” photo in the first blog of this series, you see what I’m talking about. That was taken last year, when it was a forest. We’d like to avoid some of that, if possible, this year.

To this end, I will grow vegetables in-between certain cannabis plants. This should allow a bed with a lower growing plant to keep two cannabis plants separated, and allow them to train in a wider perimeter. For example, between two cannabis beds, I’ll have a bed with root vegetables, like carrots and parsnips. Root plants will not be as impacted by the shade on either side caused by cannabis. I will probably place a tomato cage in that bed, so that cannabis branches can be tied onto that cage, with no plant interference from below.

I’ll also grow a Czech Stupice heirloom tomato between two other cannabis plants. The stupice is a lower growing tomato that I can train to remain relatively low. With the cage extending well above the tomato, we can train the cannabis into the upper portions of the cage from both sides.

Finally, I’ll also grow two cannabis plants in beds against the fence, separated by several beds from each other. I did not grow cannabis in these beds last year. They will also have lower growing vegetables on both sides, thus allowing training for the cannabis in either direction. This year, like our first two years, we’ll have cannabis growing in all three rows. This allows us to space six cannabis plants apart in a way we did not do last year. Hopefully, we’ll have more room for training, and walking around. It will eventually be a forest again, but the longer we can delay that, the better.

The person in charge of training for our grow is our son, Brenden. He simply has an eye and talent for doing this. You will be seeing photos and videos of his work throughout the summer.

Brenden says, “Cannabis may be blind, but it knows where the sun is; especially before the stalk has begun hardening into bark. Moving branches leads to explosive growth.”

He also has words of caution and consequence, “Choosing to train a plant is not without risks. It is easy to break young branches. You could sneeze while holding it and tear it from the stem. Grows are filled with sudden trauma events like this. Losing flowers in training is always your fault. This is difficult to put in perspective if you are new to growing, and your work has resulted in a moment of disappointment. But the eventual gain in yield will more than make up for a broken branch.”

Training and pruning tend to go hand in hand. Often while Brenden is doing the training, I’ll be swooping onto the plant he just trained for some pruning. By opening up the branches to increased light, you are also allowing easier access to inner growth that should be pruned regardless of an increase in light for the rest of the given branch. This is where you must make a subjective judgement on which branches to prune. The lowest growth, and the growth closest to the stalk is the first choice. There are low, inner parts of the plant where the amount of light received is compromised, no matter how much training. This growth can be removed. It will take energy away from your eventual flowers, never be as potent, and in the shade, be an easier target for pathogenic infections, especially powdery mildew.

This is the part where training and pruning are done in conjunction. The training provides the opportunity to prune and give room to the veg growth you know will eventually be the site of your prized cannabis flowers.

This is also the part most similar to growing tomatoes. You want the best flowers to emerge in order to produce the strongest fruit. You prune growth around the flower to guarantee that the fruit that is kept will grow to its potential.

It’s the same thing with cannabis flowers. You want to increase yield, but you also want to increase potency. More flowers is not necessarily better. Sometimes, especially with medical plants high in CBD etc., you want to focus on the potency of flowers rather than the amount or volume of cannabis that you are growing.

Another similarity between the two is how you starve both cannabis and tomatoes during the flowering phase to maximize the most potent flower/fruit. More on that when I’ve got flowering plants.

So when Brenden is training, I am seizing the opportunity to prune. Here is how he gets started, in his words:

“Training is a process that must evolve over the summer. When the plant is about 1 ½  to 2 feet tall, when it’s arms are starting to pass the parameters of whatever cage you’re using, it’s time to start considering how you’re going to train it. Always start at the bottom and work your way up. As you pull branches down, pay close attention to the ease with which you are able to pull on the branches. These adolescent branches will be about as easy to snap as celery, so playing limbo with them can start feeling like a circus contortion act. If you ever feel a snap, it’s sadly too late, the branch has broken, and is not salvageable.

You really need tactile finesse when tying knots with plant tape to hold down the branches you are training. It’s best to do this process with slim-fitting latex gloves or with bare, sanitized hands, as you will need all the finger dexterity you can muster. Being able to feel the rigidity of stressed branches allows you to operate faster and with more confidence. You want to draw the bottom two branches about an inch above the ground and keep working up to the top. Some branches at this stage need only be tucked under the next lowest rung on the tomato cage.”

There is a period of adjustment after training and pruning. For a few hours, or sometimes until the next morning, the plant will look awkward, possibly even violated. But as Brenden mentioned, the plant knows where the sun is. She (Pro-Tip: Every grower lovingly refers to their prized female plants in the female gender and you will often hear cultivators call their garden their “ladies”) will adjust, turning vegetative tops into sundials. One of our favorite sights is watching the tops of each stalk turn and follow the sun. That’s when you know the plant is truly connected.

After a day or so, we get to watch the plant adjust her boughs. New vegetative growth curves toward the light. If we have trained the branches consistently away from each other and are careful to continue that trend through veg growth (while also supporting the plant as she takes on weight during flowering), we should be able to substantially add to our yield.

Because we have everything more or less pulled down and tied up, we can really get inside the plant without having to touch everything constantly. By the time the plant is in full flowering mode, that will translate to more undisturbed trichomes on each finished flower.

Perhaps no advantage is as keen as the one afforded the person doing the training. Down there at soil level, you can see the story of each plant. It was while training the plants that we discovered almost every issue up until the focus became pruning. To be that intimate with each branch and bough is to find mold on the stem that is still superficial enough to be shaved off and treated with alcohol, or to find worms before they’ve built enough mass to do real damage, or to spot powdery mildew from the one angle that it ever could have been visible from. You know where the plant is under stress, you know what stage of growth each plant is at, and you eventually get to a point where you are simply more time efficient because you can anticipate where the problem areas are going to be.

From year to year, our growing experience has been limited by light and the size of the beds. Training has brought us right up against the highest potential yield for our space, which is really all we can ask for.

Brenden will be training, and we’ll both be pruning all summer. You will witness this work up close, and see exactly how our plants are trained.