First things first. Several weeks ago, our child, Brenden, informed us they are gender neutral, and would prefer being called Bee, but is also ok with us calling them boo, because that’s what we’ve always called our second born (by 10 minutes) child. I had not completely made the correction yet in this blog, and that changes now.

Well, we are enjoying the presence of the fox family this year, and they seem to be taking full advantage of the situation. In fact, they’ve gotten a tad too comfortable in the last week.

I would love to explain to them how it’s really not our fault that the plum pits go through them like a shotgun blast, and also that our deck is not typically used as a latrine by our friends in nature. Specifically, crapping on our deck chairs is the perfect reminder that these are wild animals, and they have been eating explosively fermenting fruit, seeds and all, for days.

Two mornings ago, however, we entered a new phase: They are leaving us dead gifts in the driveway. Two rats were killed but not eaten. One of them had its head removed.

I am forced to point out the bright side: The fox family is doing one of our dirty jobs for us. For this, we get the pleasure of cleaning up. Full disclosure, the rat count so far this summer is:

They are apparently eating so much plum and local vermin that they are leaving leftovers for friends around the property and driveway. Which is fine, because lots of other local creatures can help themselves. By comparison, this year, the squirrels are being the models of good behavior. But this development is probably closely linked to having active, hungry foxes on the property. Squirrels don’t mess with foxes.

For us, in addition to the headless rats, the fox family leave their most personal gifts. 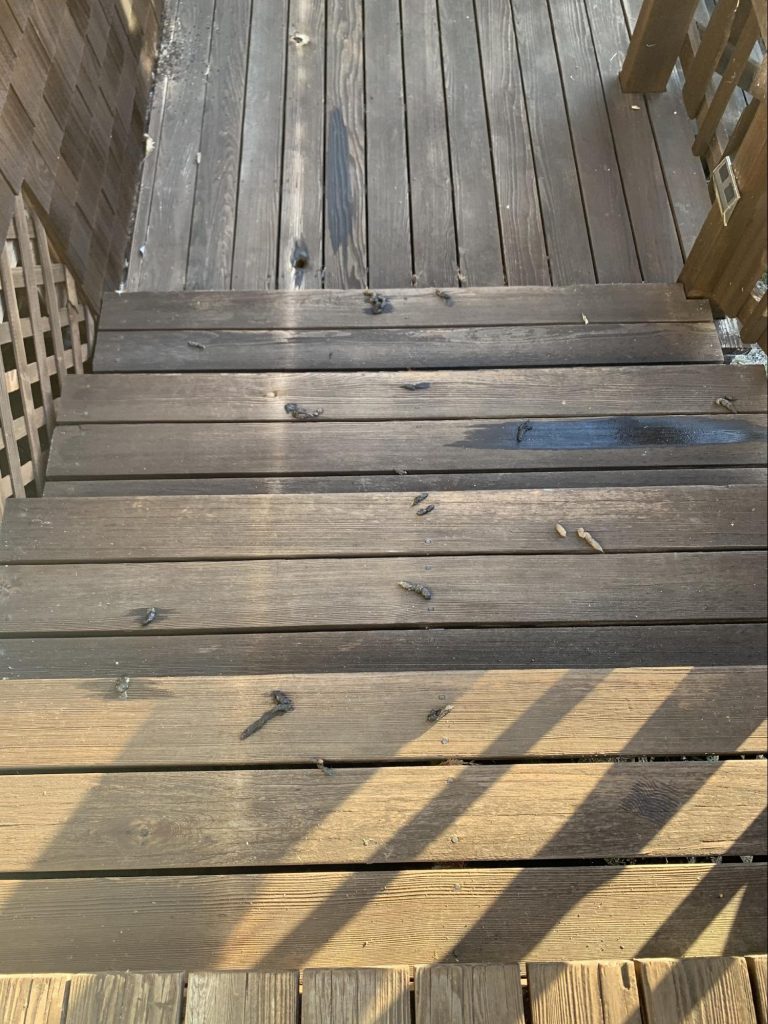 One night’s work from Mom and her two kits.

We’ve got a problem with ACDC 22. My suspicion is mites. Many mites. Leaves are turning yellow and brown very fast. This is not a water issue, a soil issue, or a phosphorus problem. This is not calcium, magnesium or iron deficiency. I have sprayed Neem again and will observe. But my guts are telling me this is a serious problem, one where we might lose some, or all of the plant. We are probably going to have to cut off a branch to see if there is something brown inside. If there is, the plant will be removed entirely. If we can isolate the problem, we can cut off the impacted part and hopefully treat and save the rest.

But this is looking more widespread than a single branch. The number of spider mites Bee found the other day were a very good clue. We will be examining and evaluating this plant today and over the next few days. If we have to remove her, we will. We’ve got plenty more ruderalis growing, and I will not risk the entire crop. If removing this plant solves the issue, she will go. Don’t like to, but the crop is more important than any one plant. All that said, we will give her a few more days and see if other treatments can save the plant. I’ll brew a special tea, a bit higher in nutrition than normal, with lots of phosphorus, though I’m certain this is not a deficiency..

Bee came today and we conferred, after their work. It looks similar to both of us, to what we saw a few years ago in a plant that we had to throw out on harvest day.

Upon close inspection, this was discovered at the base: 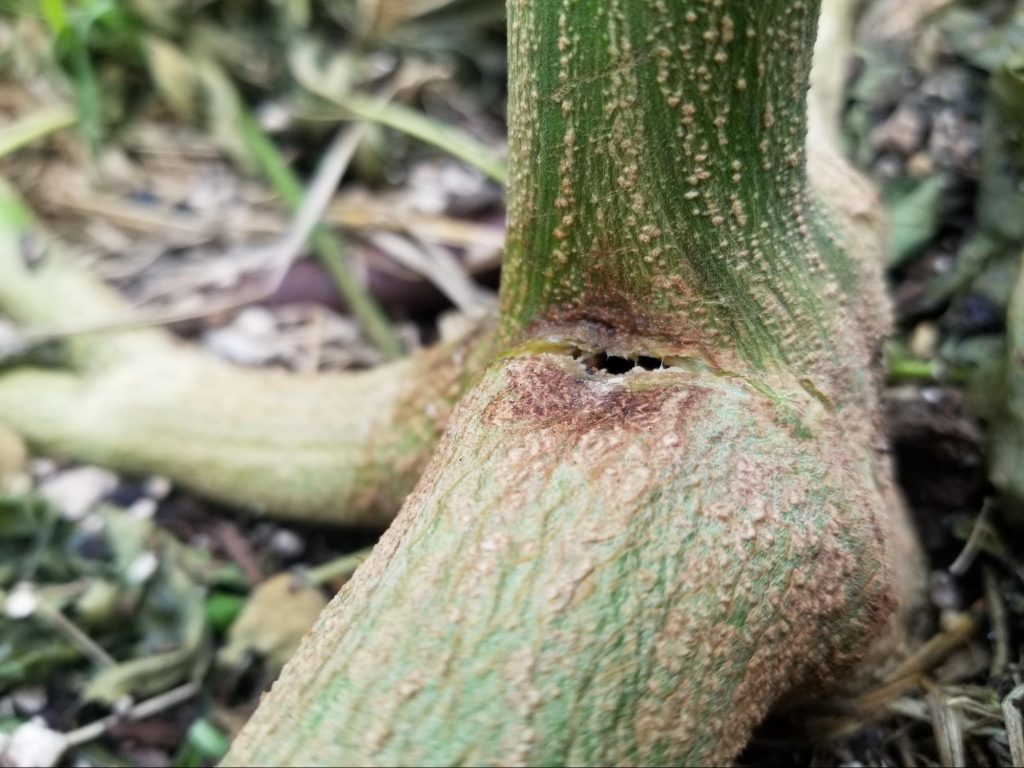 We have treated the opening with alcohol and honey. We have removed all the dead, or dying leaves. We have sprayed the plant with Neem again. Now, we will wait and see how she responds over the next 72 hours. Bee will return Sunday. We’ll see how she is and make our next move at that time. We’re certain this is where the problem started. This is free access to pests, and this bed had a bunch of spider mites, so this is likely the end of ACDC 22. But we’ll wait a couple of days before deciding. If we can keep this opening sealed, we might have a chance. Mold is not present. With all the dying stuff removed, she actually looks very good today. We will see how she behaves the next several days. I’ll be surprised if she survives. 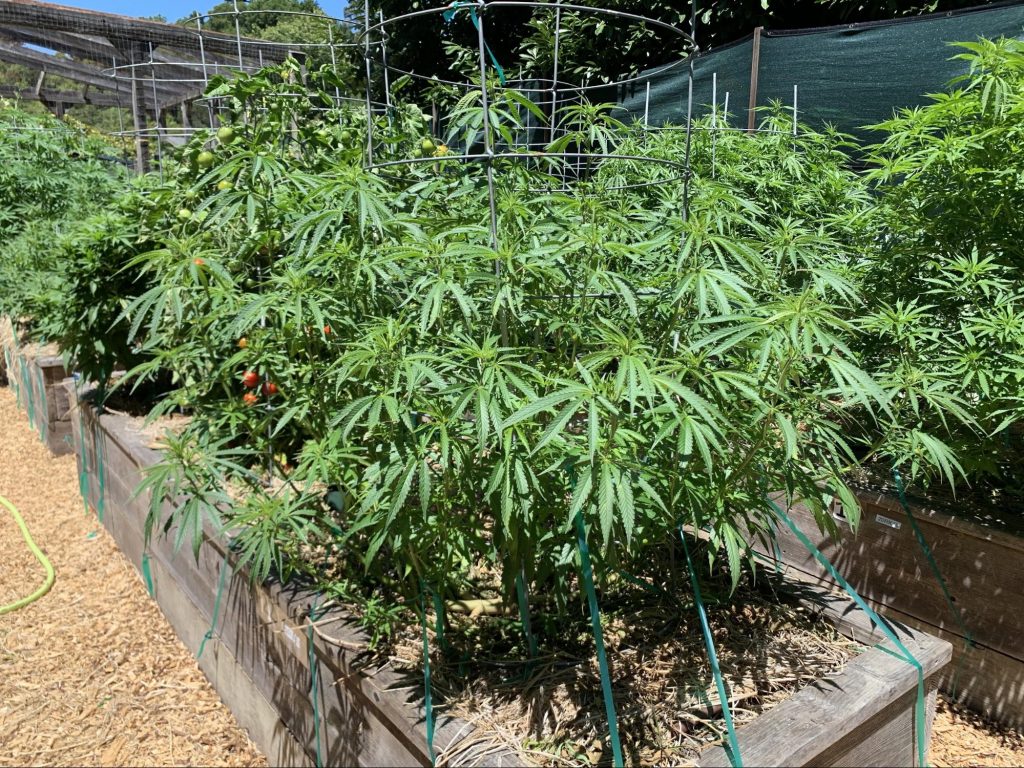 In happier news, and the beds are full of it, it’s looking like RK 16 and RK 18 will be our two largest yielding plants. After two years of growing this cultivar, it is safe to say these are some excellent seeds. All four we’ve grown to date are plants inclined to max out. Though we grew two of this cultivar last year, my guess is the two we’re growing this year will bring a slightly higher yield. Next year, I might grow one of these, or skip a year.

Speaking of next year, plans are being made. After a lengthy chat with Bee, we agreed that next year, we reduce the number we grow to eight plants, and we leave a bed without cannabis in between every plant we grow. Nothing but low growing things in-between the cannabis beds. We would like to take a year and see exactly how large we can grow each plant. This should also make for fun virtual tours of the farm, as we’ll have nothing but monsters growing. As previously mentioned, I’ll be focusing on one cultivar next year, Magic Jordan, so that I might start learning about that plant’s potential with CBG. It is reputed to have the largest amount of CBG of any cannabis plant. I’m also planning on growing a classic, AK-47, just because I’ve never grown this famous cultivar. Curious how I’ll react to a plant famous for being both stimulating and relaxing. Probably also grow an Ultimate Purple, which our family has decided we like a lot, and also because I would really love to grow a purple plant that truly turns purple, like this, which was not mine: 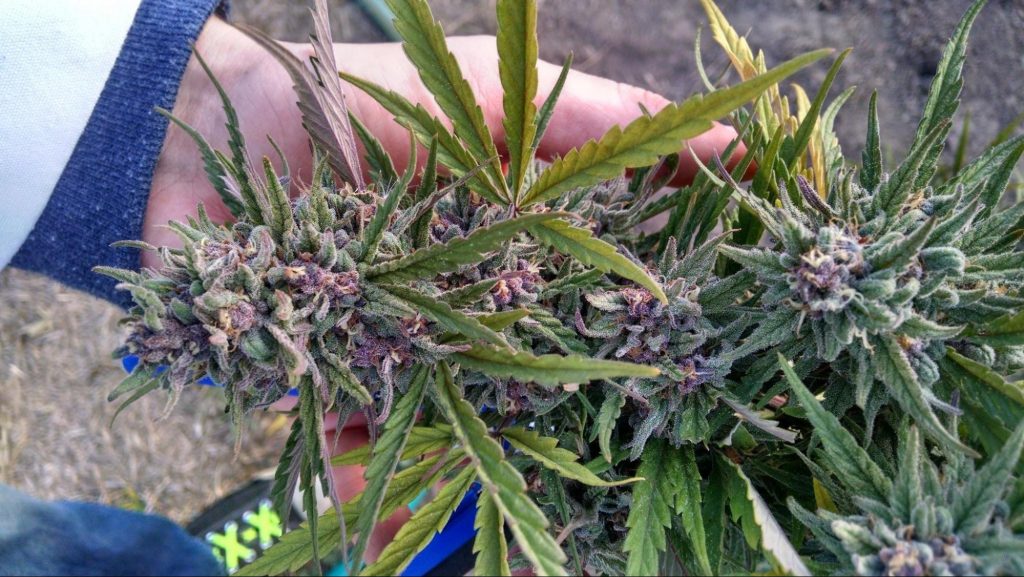 A Purple Kush, grown by our friend, Mr. E.

It is another week of bustling activity in the beds. While most of the plants are still stretching for that last burst of vegetative lustre, there are varietal insects and pests amidst color everywhere we look

One of our predator flies enjoys the orange Calendula. 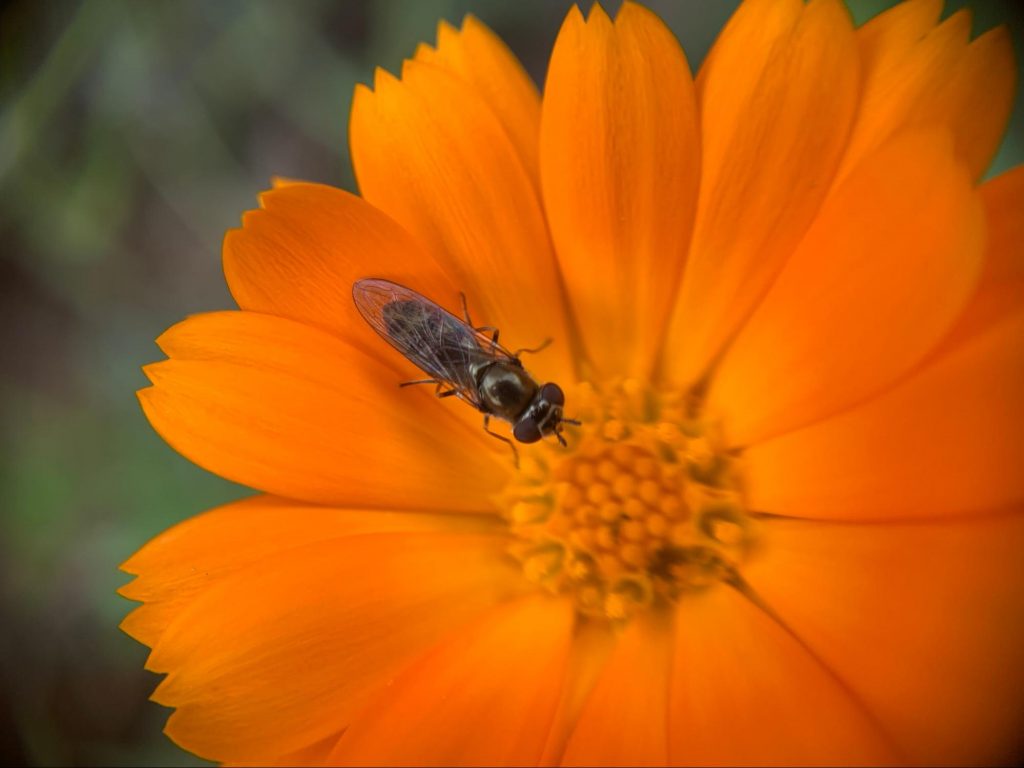 Here, a spiky caterpillar emerges from beneath soon-to-open borage flowers. 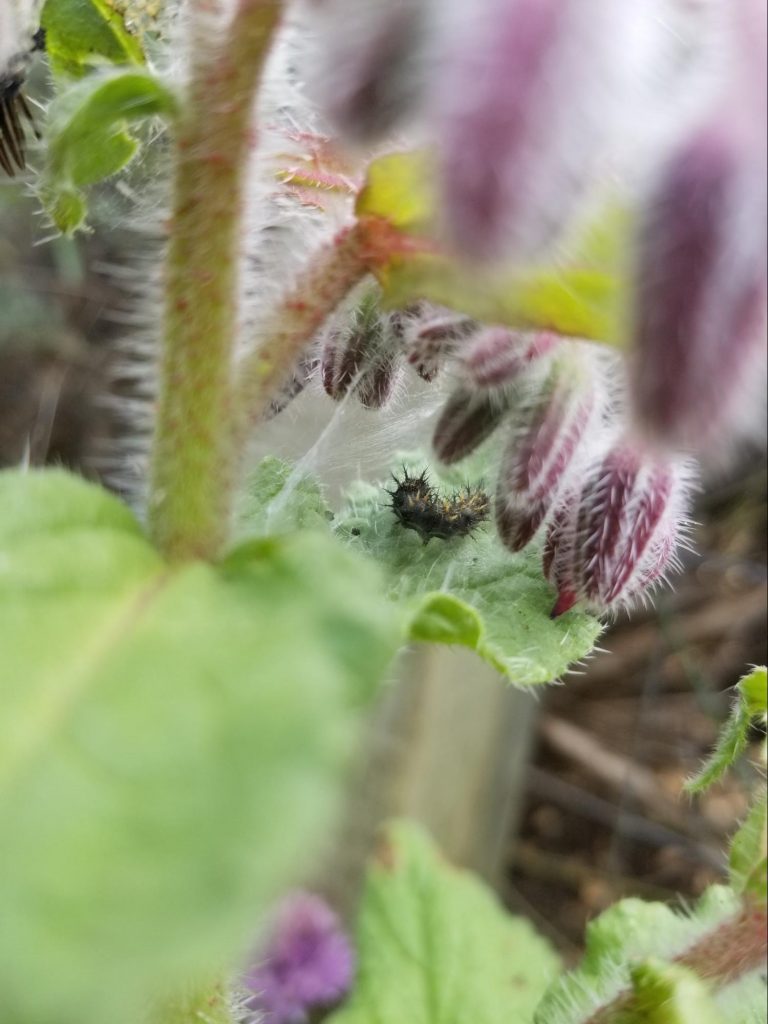 We are giving away more ripe Stupice than we can eat. 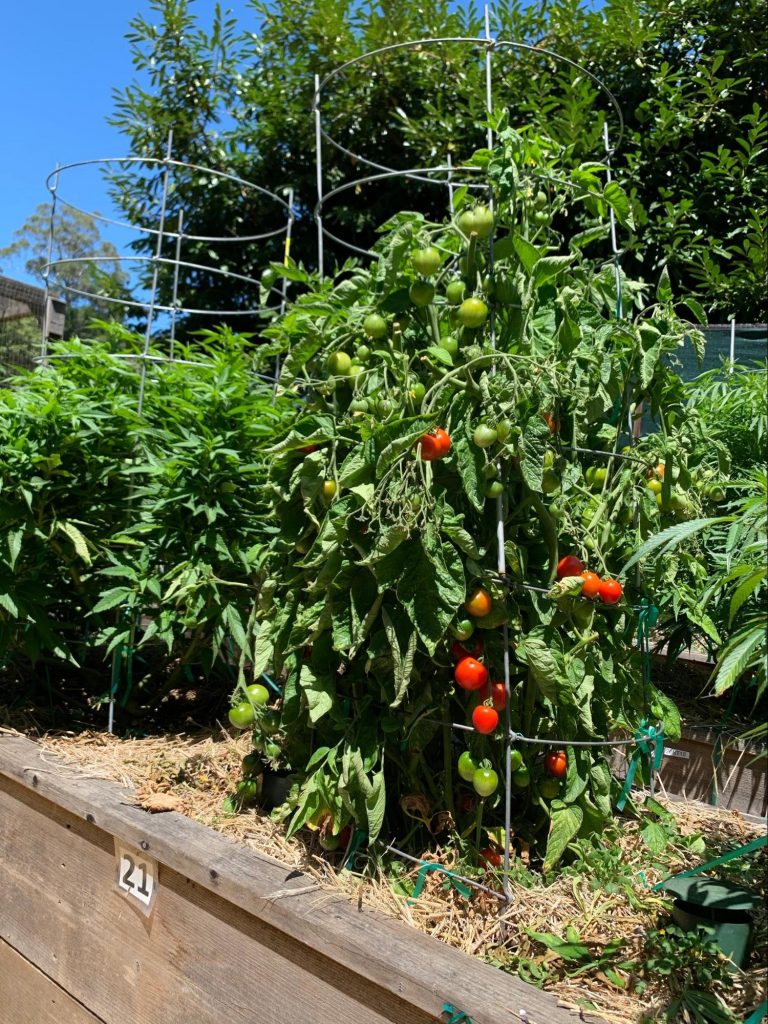 Our zucchini is producing edible fruit every single day right now. We prefer them when they are small and young. The larger goes into bread. I have picked and munched while pruning. 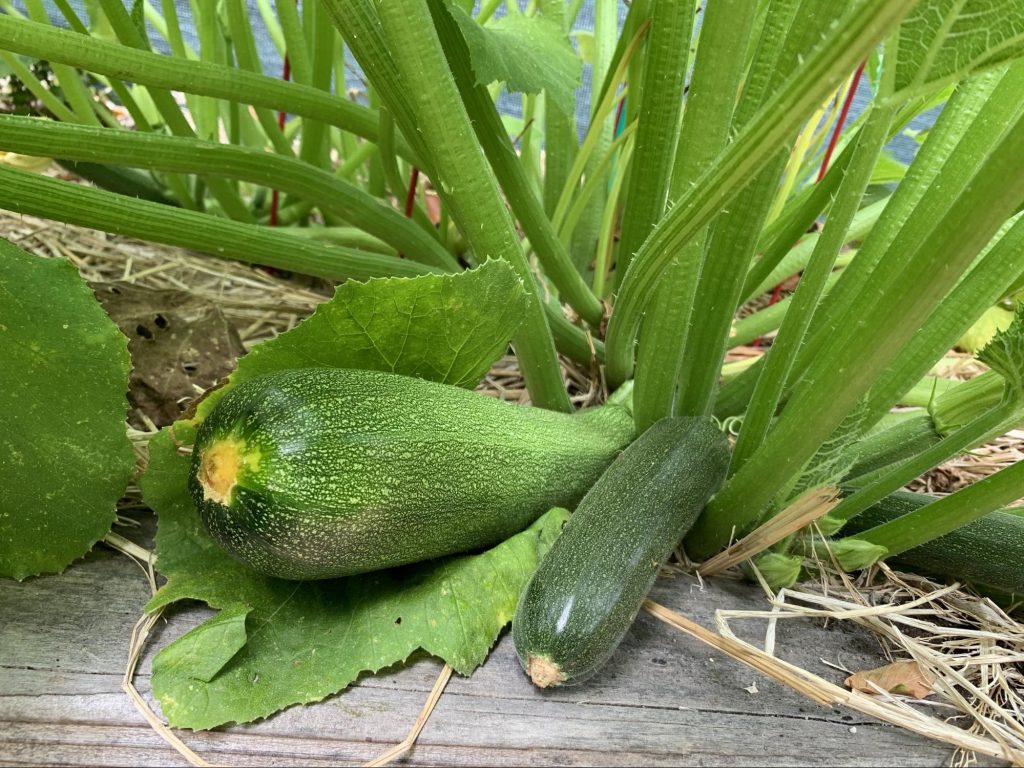 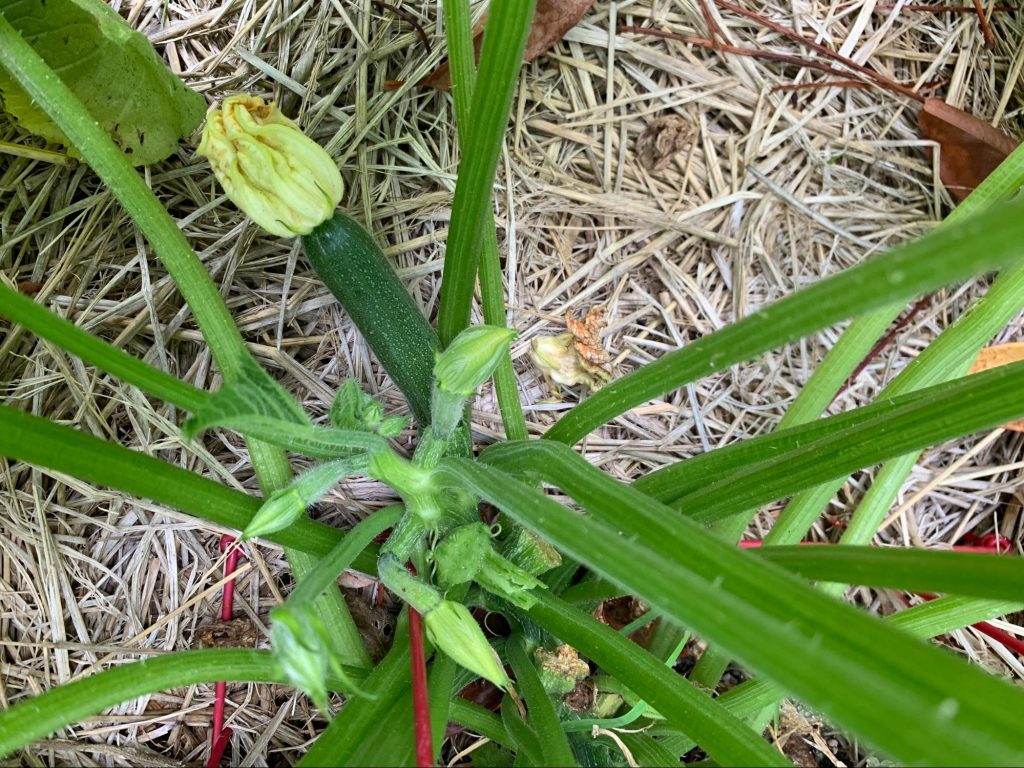 Because of the mite situation in bed 22, I am not doing a BT spray this week. Our companion plants seem to be handling the vast majority of moth and butterfly nesting, and I need to make certain the pest situation is under control before I return to my pathogen combat.

While it is true that only one mite could bring a plant down, it appeared that many mites were making their home in bed 22. This must be a new infestation, and they must have been prolifically breeding. They are more than likely isolated to that bed; especially since the Neem spraying began. I’d imagine there are a lot of dead mites. But I will continue to spray every other day until Sunday, when we evaluate again. I’m also going to prepare a treatment in the soil that could prove fatal to quickly moving mites.

Last week, Karen took a group of photos, showing how plants are gravitating toward the aisles. In some cases, that’s the only place we can train certain stalks, other than running them into the next door plant. The more plants are in the aisles, the greater the risk of plant damage from walking back and forth. (This is one reason why we want to grow only eight plants next year.) It’s a little early for me to stop walking down aisles. That won’t begin until September. But while we are still walking down the aisles, this is when plants are most vulnerable to accidents. Even now, none of us can walk down any aisle without having to turn our bodies, and we’re still brushing by branches covered with leaves and sprouting growth. This will only increase. 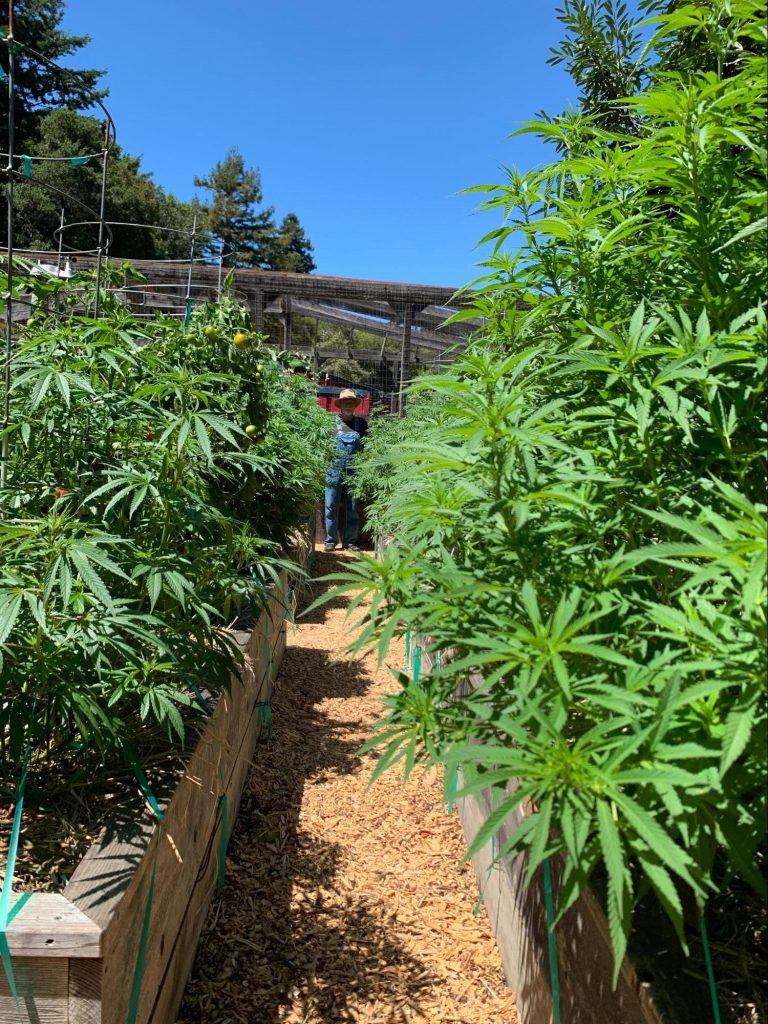 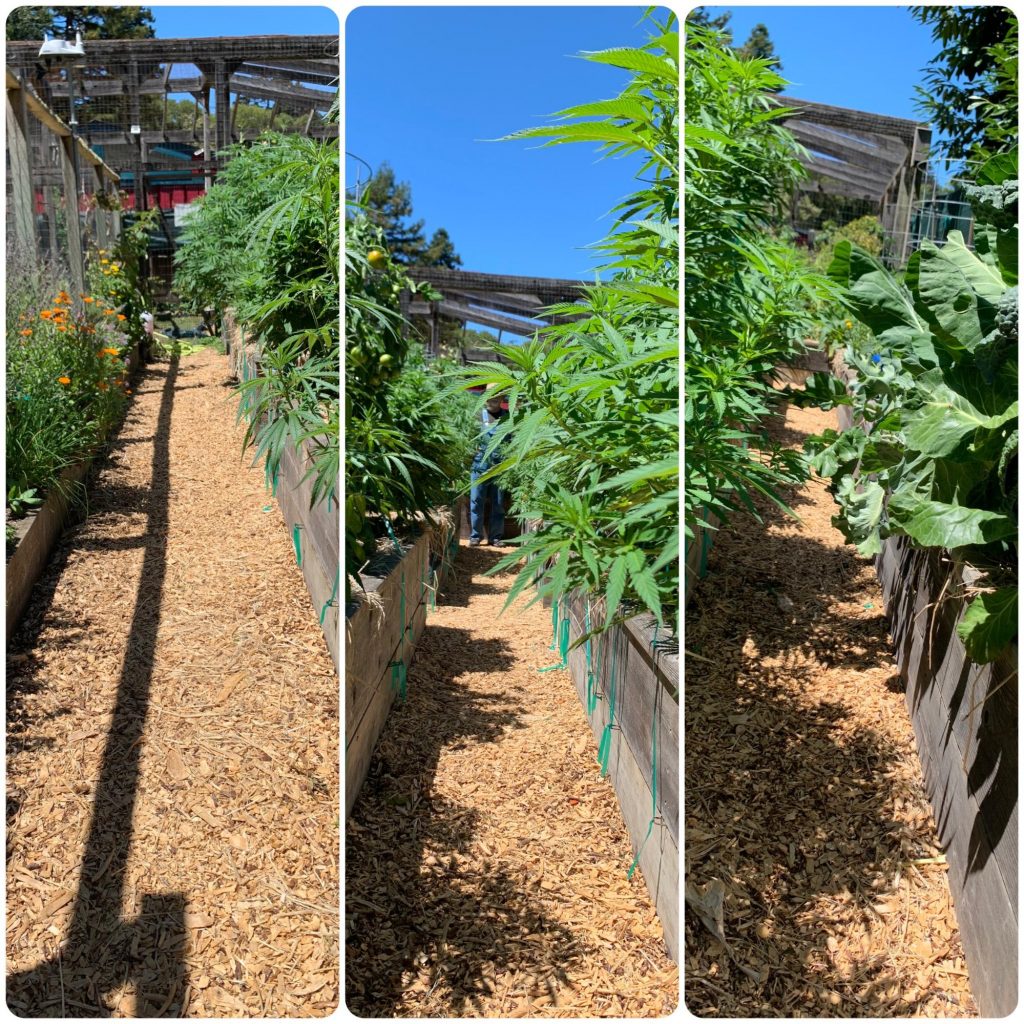 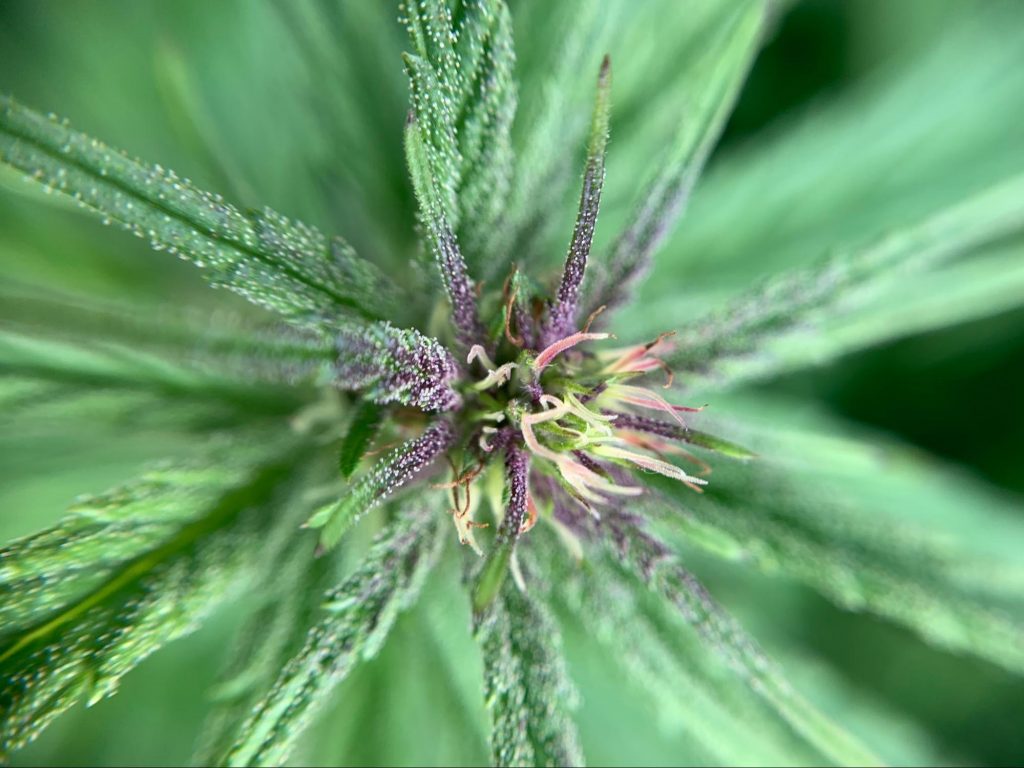 And this is Sour Tsunami, day 11 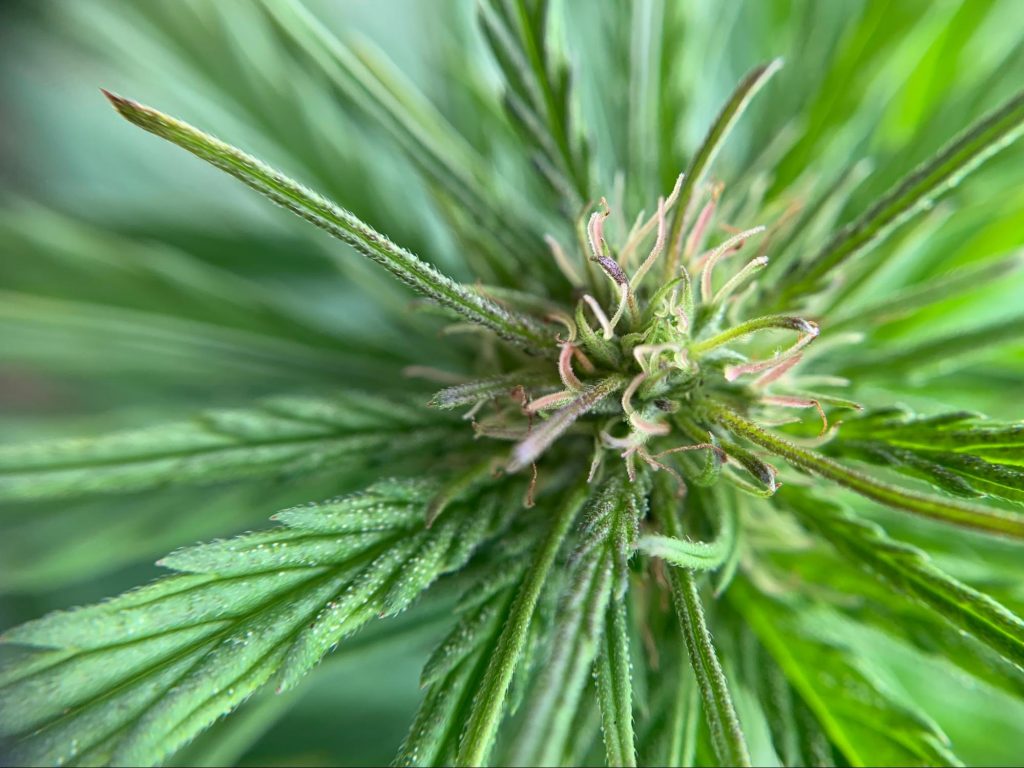 Another piece of happy news is the rapid development of ACDC 7. This plant is growing up fast. New growth on each stalk is showing and with room to expand, due to training, and probably another month of veg growth for this auto flower, I’m feeling less apprehensive about ACDC 22. If I lose her, I’ve still got this plant, and two others. I’m excited about how ACDC 7 is responding. This is last week, and then this week: 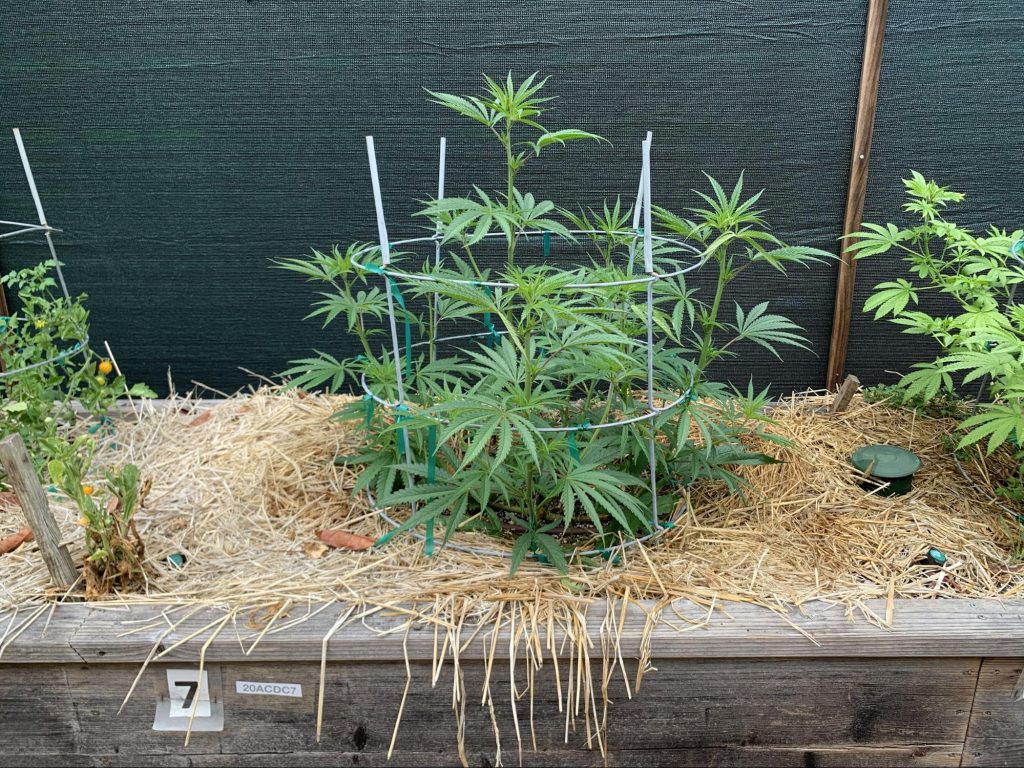 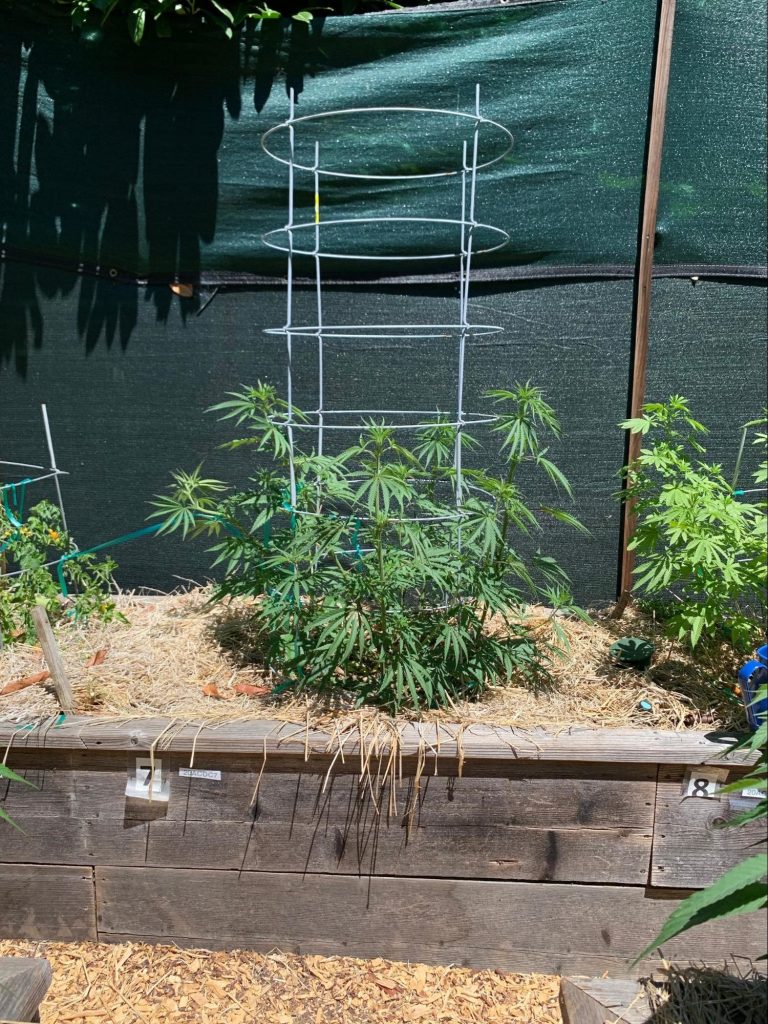 This week, you can see the top stalk from last week is now being trained out of the center, so that new growth from the center has room to grow, and all the sun it needs to sprint. This will probably not be a plant with lots of flowers, but the thickness of stalks in each branch tells us she is going to produce some large flowers. At this point, very little pruning will be needed. We hope this sprint lasts until the end of this month, or the first week of next month, when we hope she’ll turn.

One more piece of news, regarding ACDC 17. Because of all the low level pruning, and pruning some that was growing into RK 18, this strange and interesting ruderalis has now grown over my head. I’ll document this more soon.

Survive and vote. See you next week. 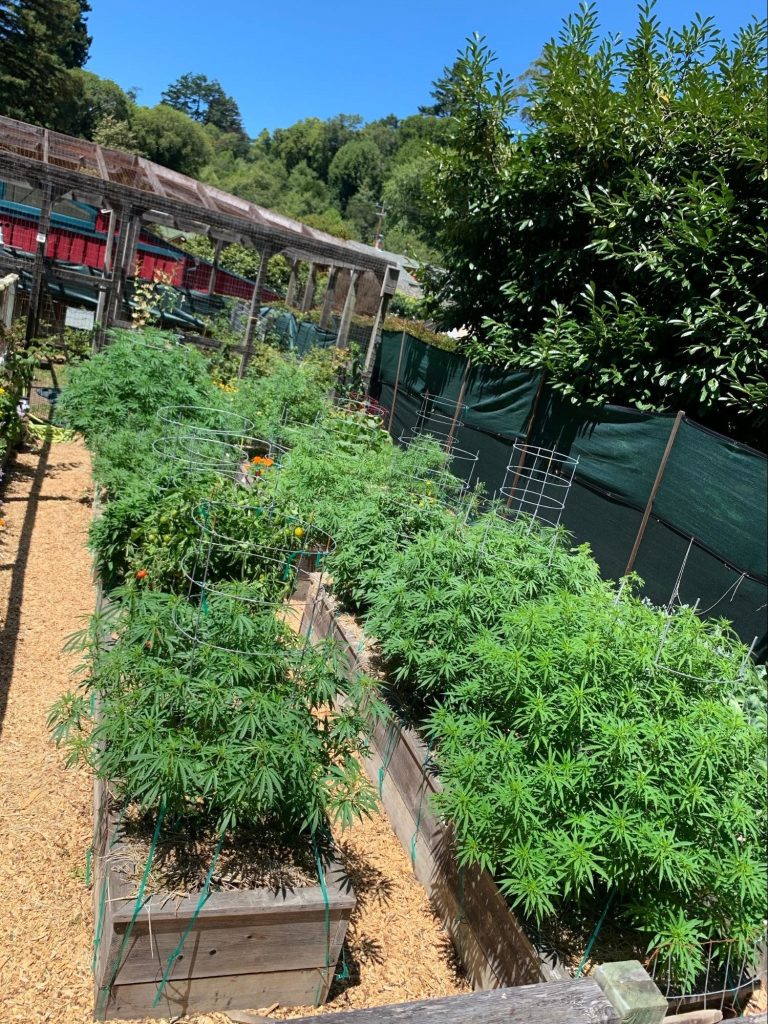