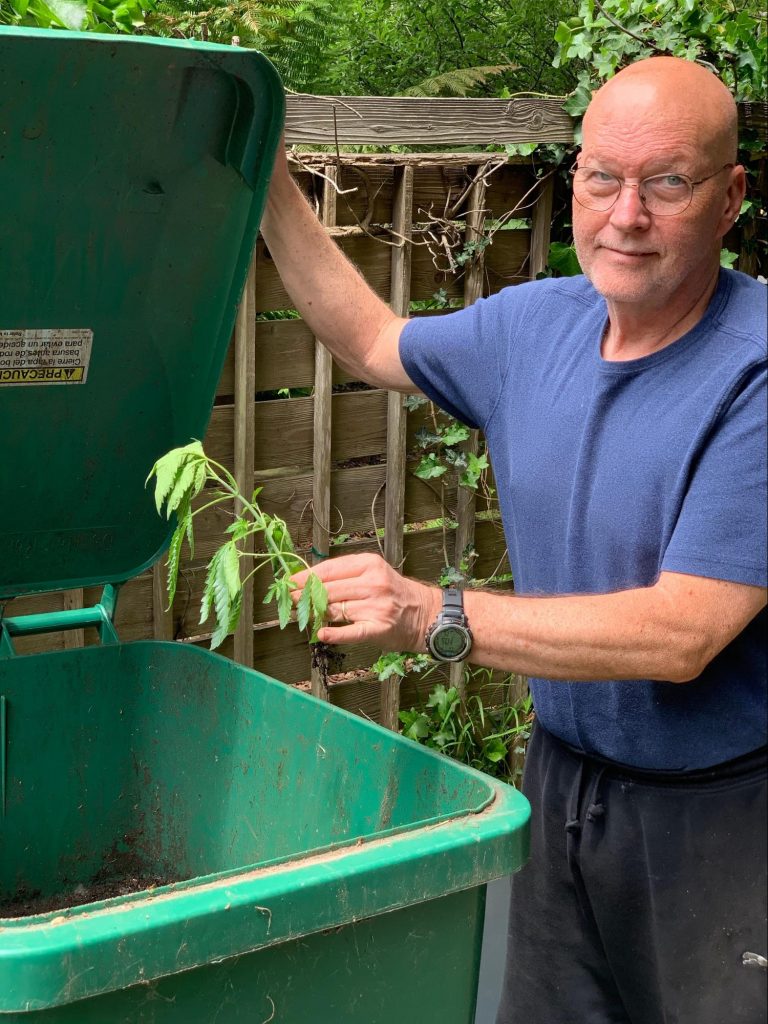 This morning, as my plants begin to show their sex, I’d like to offer a few words for the soon to be departed males. Over the years, they have attained a justifiable bad rap. They are less than stellar cannabis, and good for only one thing.

However, I would be dishonest, and less than grateful, if I did not acknowledge the memories you have given me over the years, even apart from last year’s Sack Festival in my cottage.

When I was much younger, and knew absolutely nothing about cannabis, we had no idea that the majority of what was around in those days was male. We didn’t know the seeds that were predominant in those $10 sacks were not going to get us high, no matter how finely, or how little we ground them into a more easily combustible dander.

I remember someone showing us a bag of weed he’d just purchased, it was Tijuana Gold, or Acapulco Gold, which is now one of the cultivars that make up the CBD dominant plant, Harlequin.

It really was goldish, and heavy with seeds. My friend told us the golder it was, the fresher.

We had no clue this bag of yellow cannabis was a male, grown as quickly as possible in a calcium depleted field, and rushed north of the border to satisfy the gringo desire for gold weed. The degree of yellow in that bag was not a sign of something fresh. It was a clear sign of a plant that had grown under duress, but this was far beyond our collective grasp in 1975. I remember getting a headache from ingesting some of that plant, and I was pretty much done with the whole marijuana thing.

I distinctly remember sitting in rooms of friends, their walls covered with art pinned to cork slabs, while they combed their shag carpet for seeds and any plant matter that might have fallen off the desk. I remember thinking, how fresh can it be if it’s been on the floor? That was among my first impressions of this plant. It was reducing some of my friends to their hands and knees, combing through carpet for bits. I joined them in the search. At that point in my life, however, I generally preferred beer to get a buzz on.

Until my good friend, Kim, handed me one packed joint of something called sensimilla for my 19th birthday.

That was a memorable afternoon, where I consumed a small portion of the joint by myself relatively close to where two people were playing tennis in a park, and proceeded to watch them for 90 minutes without removing my hands from under my chin. It was beautiful and comical to watch. I don’t think the tennis players were at all aware of the large, laughing fool lying on the grass. Sadly, tennis has never been as interesting to me as it was that day, though I have attempted to replicate the circumstances. I’m grateful for that moment, because it gave me perspective, and introduced me to enjoying cannabis.

Now that I’m growing, and especially after last year, I’m beginning to appreciate males for the sheer futility of them. Most of them grow differently than females. They make me think of all Ruderalis, a tall, slim plant, with branches extending out like a stick figure. The boys are desperate to grow above whatever they perceive to be the local canopy. They hurl themselves toward the light in a race to demonstrate how truly magnificent they are. They are show offs. They are entirely representative of their gender throughout nature.

Male birds, for example, tend to be more colorful, in order to attract a mate. Cannabis does not have unusual color at this early stage, but some do eventually display striped pollen sacks, which they clearly hope give them the inside track toward a mate.

Males grow so fast, they appear, at times, to be jumping right out of the pots. Many seem to have fairly shallow root structures, though they are inches tall, so I’m constantly having to prop up, or pour some more dirt in their pots to keep them stable. Often, in the morning, after a night of being blown around every which way in the dark, I have to fix the leaning potential males. I don’t recall having to prop up plants that turned out to be female, nearly as much as males.

But you must give those boys credit for trying. Most of them show themselves rather quickly, but some are cunning, and resist showing right away. They hold out even after I give them their first half a cup of compost tea. Historically around here, this tea tends to bring the boys into their sex in about two days, but even then, the strongest hold out.

I’ve had two males that made it to beds. I had not seen clear signs of either sex in those plants while in the cottage. What I had seen were two plants growing in a perfect way. Lush, full and green, they had the look of champions. I took a risk and planted them shy of six weeks. But no, alas, it was the next compost tea, the first tea they got in a bed, that seemed to force the issue. At that point, I had no other plants to replace them, so those two prime growing mediums were empty for the season.It was a shame those males were not around for a winter seeding procedure. Either of them would have been perfect males.

All of this is the fault of the grower. This year, no plant will go into a bed until I’m certain. I will be patient and wait them out.

In the winter, when it’s cold outside and only quince grows well, I’ll be waiting for you. Remember boys? That’s when I want seeds. You can house up in the cottage with a bunch of your friends. It will be coed. We can let the biggest and strongest male win the day, just like you’ve always wanted. Then, once we’ve found the best possible female for you, I will turn out the lights, close the door, and leave you two alone, so you can do what you do in the privacy of 72 degrees, and a slight breeze.

In the meantime, feel free to hurry up and show yourselves. I understand if you want to wait for the compost tea. You love that stuff. But just so you know, there is a lovely, recently emptied green recycling bin where you can go as soon as you show. All your brothers will join you soon, and you guys can have that place to yourselves until the big truck takes you away to your new home.

Ok, it’s about time to lift and look. Thank you for trying. Don’t worry boys, I’ll be gentle. 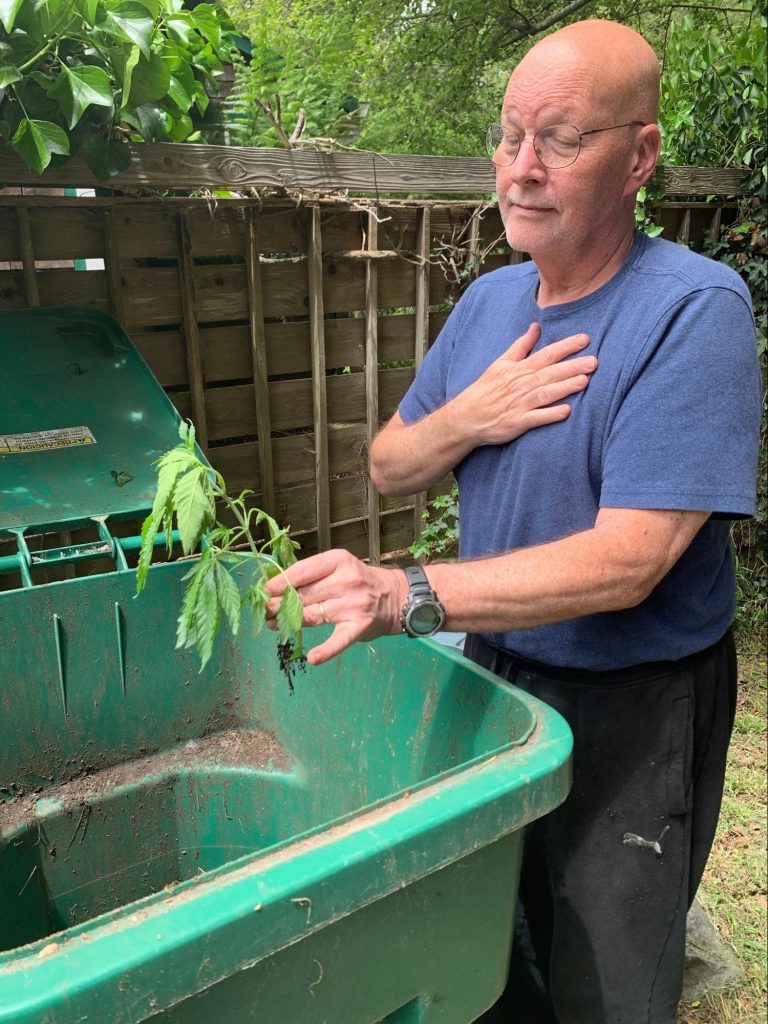 I’d like to dedicate this blog to my late brother, Patrick, who showed me the basics regarding cannabis and corked walls when we were much younger men, and also introduced me to both Mad Magazine, and The National Lampoon.