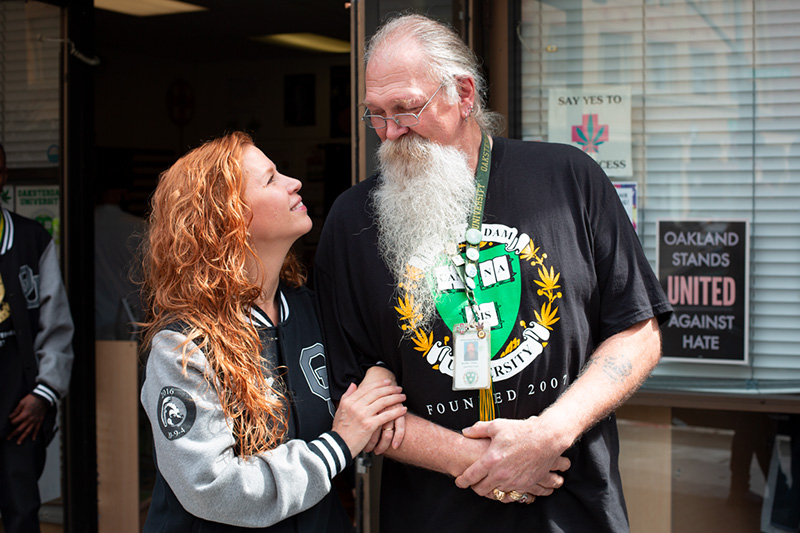 The world lost Big Mike Parker Sunday. More than a friend, he is a secret superhero of the cannabis movement. That’s a strong statement, but it couldn’t be truer. Big Mike was the man behind the scenes during nearly every interview, photo shoot, camera crew, news crew, legislative tour…every time Oaksterdam was in public view, Big Mike was usually there, just out of view, making the rest of us look good and feel confident about what we were doing.

On a personal note, he was especially talented with the girls – the cannabis plants, that is. He would always choose the best looking to be in the room or the shot, knowing that they are what the people or camera really wanted. We used to joke about how the girls were the stars, and I was just around to narrate – the girls he put out would make me look good. He would say to me, “look, Sis, this one has purples and brings out your eyes” as he would position the cannabis plant – just so – in the frame.

Big Mike touched so many students, offering accessible information and an easy smile. He was usually the biggest guy in the room all the time – you know, the big guy that most of us know that could be really scary, but is truly a gentle giant. Unless, of course, you hurt someone he loved – then, not so much.

Big Mike came to us in 2009 and started to volunteer. He was hired on officially in 2010 and stayed by my side (usually helping to carry something) through every single issue that happened, from standing up for us through Prop 19, with growers and biker club friends that were likely suspicious, through the federal raid. He hugged me that day, now six years ago this week, and promised everything would be alright, just like you need a friend to do. Then he made sure we were all right by helping us move locations, one table or museum case at a time.

He was outside, balanced on the third floor outside wall hanging protest banners, and later trying to scrub that same wall for hours when the mural was destroyed with tagging paint. He hugged me those days too and told me everything would be alright, and once again he was right.

Big Mike was the first person to tell me I was pregnant (with Jackson- btw he was right!). We were in the OU elevator and he looked at me and said, “Congratulations, honey. I looked back at him in shock and fear and he smiled gently and said: “I’ve been around many pregnant women in my years, dear, I know what one looks like – it’s OK I’ll keep your secret.” And he did. He told me everything would be fine. It was.

When my husband almost died of pneumonia and our hot water heater was out for weeks simultaneously, Big Mike found out and came by with Peggy to help figure it out. He was not going to let me keep boiling water while my husband was in the hospital. He called and called and ordered the parts and then showed up to install them himself. He made sure we were all right no matter the issue.

He also made sure I knew how beautiful I was even when I waddled at nine months and did not feel very beautiful.  Again, a true friend. Big Mike would give you positive reinforcement whether you were about to walk out on stage, going into your first job, or starting your first grow. He was everyone’s true cheerleader and would go out of his way to to make sure you felt you could do it – because he knew you could do it. I can’t tell you how many times I would accomplish something because he believed in me, and I trusted him more than myself.

I would wish a friend such as Big Mike on anyone. Our lives are all so much richer for having had him in them. Just a brush with him as a part of our day made the day better. The world is simply so much better having had Michael Parker in it.

He would tell us we saved him, but no, he was our savior. Over and over and over he would come through for OU. He was a ride-or-die dude.

If Big Mike made your life better, this would be the moment to show him by hoping him take care of his family, now that he is gone.

We will keep you posted on a memorial.