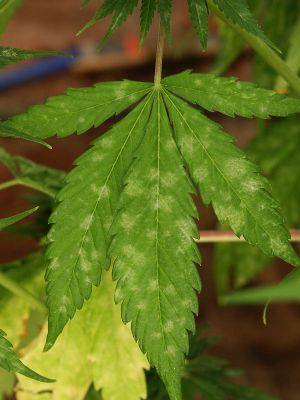 Powdery Mildew is a fungal disease that affects a wide variety of plants. PM is one of the easier fungal diseases to identify as its symptoms are quite distinctive. Infected plants display white, powder-like spots, which are quite noticeable in their early stage. Typically, lower leaves and plants in the flowering stage are first/most affected as airflow can be often restricted, but PM can show up and spread anywhere.

As the disease persists, the spots will become larger and greater in number, and affect other regions of the plant, including flowers. If left untreated, black specks will also appear, and the plant will turn yellow/brown, atrophy, and eventually die. PM cannot be completely removed from mature buds, so it’s very important to catch any early signs, or to take occasional preventative measures even if there are no pathogenic signs.

PM is typically found in environments with low light, high humidity, moderate temperature, and in areas of poor airflow. The spores can remain dormant until optimal conditions are met. The optimum conditions for PM germination and mycelium growth is 77° F with 55%+ humidity. PM spores can be transported by wind, air vents, human and pet dander, clothing, pests and just about anything that moves. Aphids (And other types of garden pests) are typically a precedent to PM and other fungal diseases, as their interaction/destruction of the plant, as well as their fecal secretion, are substantial vectors of transmission.

PM will hinder the growth of your plant by preventing photosynthesis from occurring, which will decrease yield. In worse-case scenarios, PM can destroy your whole crop, making your flowers inedible. It is important to stay vigilant when inspecting your garden and to use preventative measures if any precursor symptoms appear.

Milk Spray:
The idea to use milk as a biological fungicide was discovered by Brazilian scientist Vagner Bettiol, which he published in the September 1999 issue of Crop Protection. Bettiol had experimented with different mixes of fresh milk to combat PM on his greenhouse zucchinis and had found it to be beneficial in curing the infestation. Australian scientist Peter Crisp from the University of Adelaide concluded Bettiol’s research by testing his method, along with 40 alternatives. Crisp’s study showed that Milk and Whey were the most effective, yielding the best results.

Used by itself or in conjunction with a another fungicide, milk sprays have been proven to be effective at combating and preventing PM. Use a 1:9 mix of milk:water and spray plants thoroughly. Be sure not to exceed 30% milk as too much milk can promote mold growth. Since milk contains proteins and sugars, Botrytis infection (grey mold) may be promoted after treatment if the the spray contains too much milk or is sprayed at night and doesn’t dry thoroughly. For this reason, it is recommended that milk sprays should only be used during the vegetative stage and pre-flower and during light hours. If using a milk spray in flower is necessary, be sure the flowers are able to dry thoroughly. Using skim-milk instead of whole-milk will reduce the unfavorable odor of the milk. Besides odor, there is no beneficial difference in using fresh milk, whole, 2%, or skim.

If PM catches you by surprise, remove affected leaves using gloves and a ziplock, and dispose of correctly and away from garden). Be sure to be as careful/cautious as possible, since spores are easily spread in the process of removal. Follow up with the fungicidal spray, targeting areas/stems where affected leaves had been. During treatment, halt feedings and use only pHed water to help decrease the chances of an infection from spreading to new growth. For maximum effect, the milk-spray treatment should be alternated weekly with another fungicide if available.

Alternatively or in addition to a milk spray, other remedies can be employed:

Here are some things to keep in mind when using a burner:

In addition to foliar applications, soil amendments may also be needed to combat a PM infection, or to eliminate another type of root/soil pest or pathogen. To learn more about soil remedies and other related topics, enroll in an Oaksterdam University Horticulture Course, and stay tuned for next month’s tip!