Jeff Jones and the Origins of “Budtending” 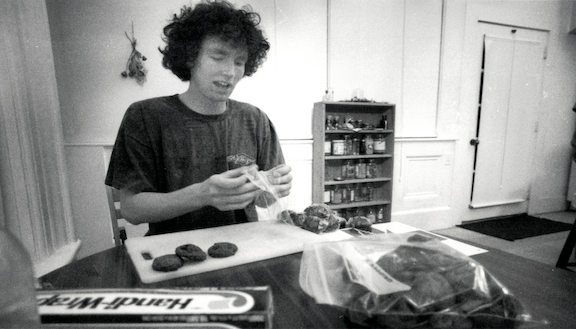 The history of the modern dispensary and much of its associated terminology can be traced to the Bay Area, where a group of advocates began to openly distribute medical marijuana in the late 1980s.

At that time, Dennis Peron and “Brownie Mary” Jane Rathbun made national headlines by openly providing cannabis to AIDS patients in San Francisco. A young Jeff Jones saw them on CNN from his home in South Dakota and was inspired to move west to be a part of it.

Jeff had lost his father to cancer when he was 13 and making marijuana available to those who needed it resonated with him. He visited Dennis Peron’s San Francisco cannabis clubs and was inspired to replicate the concept in Oakland, where he had settled. He chose a prominent location in downtown Oakland because he saw how being public provided Peron’s work with legitimacy, made it more accessible by public transit, and integrated cannabis patients into the broader community.

Jeff opened the Oakland Cannabis Buyers’ Cooperative (OCBC), one of the first dispensaries in the nation. At the same time, his friend Richard Lee, founder of Oaksterdam University, launched what would become Coffeeshop Blue Sky.

“Richard really liked the idea of making it like a bar and calling it a ‘bud bar,’” Jeff says. “I was always trying to describe it more in the context of a medical utility office, like a dispensary. You would go in and receive your medicine based on your doctor’s recommendation.”

The terms “dispensary” and “budtender” stuck and are used to this day.

With the city’s blessing, and local law enforcement encouraged to look the other way, several other dispensaries cropped up in downtown Oakland. 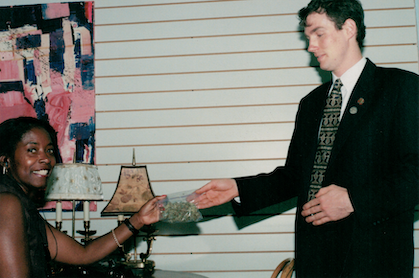 In 1998, the Oakland Cannabis Buyer’s Cooperative was briefly allowed to legally provide cannabis to patients by the 9th Circuit Court of Appeals before the US Supreme Court reversed the decision. In this picture, Jeff Jones is shown providing the first legal bag of cannabis to multiple sclerosis patient Yvonne Westbrook after the appeal.

Richard Lee opened a gift shop, a museum, and Oaksterdam University, and Jeff expanded his business as well. He started a cultivation operation on the top floor to provide flowers and distribute clones to those who wanted to grow their own. Jeff’s goal was to drop the price of an eighth to $20, making it affordable to anyone in need.

In November 1996, California voters approved Proposition 215, the landmark medical marijuana initiative that exempted patients and caregivers from criminal prosecution for possessing or cultivating cannabis and kicked off more than two decades of cannabis laws changing worldwide.

Nevertheless, cannabis remained illegal at the federal level, and Jeff was busted several times. One of these busts resulted in Jeff arguing for medicinal cannabis to the Supreme Court in United States v. OCBC. He did not prevail, but his efforts helped pave the way for the wave of cannabis legalization. Jeff has since assisted in drafting legislation, campaigning for those that appeared on ballots, and pioneering dispensary and budtending practices still in use.

“We thought of ourselves as therapeutic counselors,” he says. “When clients walked into our door, we would completely unveil what cannabis could be for them. How do they want to use it? What benefit did they get from it? We had many different products, from edibles, pills, flowers, and vaporizing, which was mostly unknown at the time and something I was trying to innovate around.”

Eventually, Jeff was busted and forced to shut down. He moved to a new downtown Oakland location and converted OCBC into the Patient ID Center, which issued pre-verified identification cards to patients.

“I saw the niche of giving patients what we didn’t have, which was a card that gave them some recognition and legitimacy in the field and made law enforcement take a step back,” he said. “We created a sense of safety.”

He operated out of that location until 2020, issuing around 150,000 ID cards. The business is now defunct “due to social change,” Jeff says. “I always told people I will be here as long as we are needed. As soon as needs change, I have to change my mission.”

Jeff continues to advocate for cannabis and share his wealth of knowledge as a horticulture instructor at Oaksterdam University. Jeff observes that as cannabis mainstreams, the budtender’s job changes.

“Back then, it was a very exclusive, very limited, very grateful group of people you were helping on the other side of the counter,” he says. “You risked going to jail for conspiracy of sale just for talking to them.”

As cannabis becomes commercialized, he advises the next generation of budtenders to stay true to education. 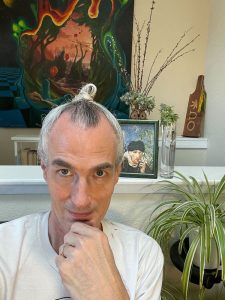 “A budtender in the past was both an interpreter and a guidance counselor. They needed to interpret the patient’s problem and then guide them into their solution,” Jeff says. “Today, it is not much different, but budtenders also have the opportunity to advocate as new policies are shaped. Budtenders get to talk to the public and give feedback to public officials that could, long-term, actually push these issues in a more legitimate fashion because they are the ones on the front line.”

This story is excerpted from The Budtender’s Guide: A Reference Manual for Dispensary Professionals and Cannabis Consumers. Published by Oaksterdam University in December, 2022, the book is a quick start guide perfect for those who want to become budtenders, or consumers who want to be their own budtenders. To learn more about Oaksterdam’s Budtending Certification Program, click here.